I. Core and Idiosyncratic Inflation in Norway1

1. In the past four years, inflation in Norway has been below the average in other countries (Figure 1), although a surge in energy prices has recently pushed it up. However, indicators of underlying (core) inflation continue to show a benign outlook (Figure 2), as both domestic and import prices have risen only modestly. Indeed, core inflation remains below the inflation target of 2½ percent established in 2001.

2. Although immigrant workers will likely continue to ease labor-market tightness, and, hence, cost pressures, there are signs that the risks of overheating have intensified. In fact, the November 2006 Inflation Report notes that “high capacity utilization, rising wage growth and somewhat slower productivity growth are expected to lead to higher inflation, particularly from the second half of 2007 and into 2008.”

3. The challenge ahead is therefore one of cautiously managing an increase in inflation toward its target while avoiding overshooting and a consequent rise in the policy interest rate. To this end, Norges Bank (NB) would need to gauge underlying inflation pressures.

4. This chapter focuses on underlying inflation. It looks at inflation and tries to distinguish between shocks that drive the underlying inflation process and are common (correlated) across countries or sectors—although their impact depends on their individual “load” and differences in economic structures and policies—and shocks that impact a single country, which, by definition, are uncorrelated with common factors. Among these idiosyncratic determinants of inflation one could think of specific features of the labor market, degree of competition in product markets, and, of course, specific policy actions such as direct and indirect taxation.

6. The analysis in this chapter is based on an application of the generalized dynamic factor model (GDFM) proposed by Forni and others (2000 and 2001). This is a statistical approach that extends principal component analysis and Stock and Watson’s (1989) coincident and leading indicator approach. Factor analysis assumes that covariation among time series can be explained by a few unobserved shocks (factors). In factors models, therefore, a large number of covarying series are transformed into a smaller number of unobserved orthogonal series (common components) so as each additional factor (component) explains as much as possible of the remaining variation in the observed series. The basic framework is that of a dynamic factor model in which the assumption of mutually orthogonal idiosyncratic components is relaxed to allow for some mild cross correlation. Each observed series is then represented as the sum of a common component and of a disturbance term (idiosyncratic component), which is uncorrelated with the common component. For each country and each sector, underlying inflation is proxied by the common component, which, although driven by the same factors, can differ across countries and sectors depending on their structure—that is, the impact on inflation depends on the “load” for each factor.

7. The dataset comprises a panel of 19 countries, and 214 monthly series of CPI indices and their components over the period 1999–06.2 Factor models can accommodate large panels and overcome the problem inherent in multivariate analysis when the time dimension is smaller than the cross-country dimension. The data set contains seasonally adjusted monthly inflation from January 1999 through October 2006, both for headline CPI inflation and for its components, with over 17000 data points.3 The sources are the Harmonized Index of Consumer Prices (HICP) and national statistics.

8. Each of these 214 series, spanning both countries and sectors, is decomposed into a part that is explained by a set of common factors and a residual part that reflects ideosyncratic influences. The first step in the analysis is to determine the number of common factors. A principal component analysis of the spectral density matrices of the data (Figure 3) shows the share of the cumulative variance (cumulative eigenvalues) of the series that is explained by each successive principal components (eigenvector). Different thresholds can be set to identify the number of common factors (components). Here, this is chosen by stopping at the factor (eigenvalue) that improves upon the explained cumulative data variability by less than 10 percent at all frequencies. This yields three dynamic common components, which explain about 80 percent of the total data variability. From an economic point of view, a possible rationalization of this choice would be to look at the inflation process as generated by three underlying forces: demand, supply, and structural variables (although these forces cannot be identified with specific components).

With 3 common factors and 12 as the number of lags (in light of the monthly frequency), the number of static factors is set at 39.

10. Figure 4 plots headline CPI explained by the three common factors and the static factors (henceforth, underlying inflation) and actual inflation for Norway. It suggests an increased importance of idiosyncratic factors in explaining the pickup in inflation in 2006, in contrast to what occurred the previous year. A closer look at the components of the CPI index indicates that food, housing, utilities and other fuels, and hotels and restaurants were the sectors that contributed the most to the rise in inflation (Figure 5).

11. But which sectors are the most likely to experience price pressures looking ahead? (Table 1) reports the difference and ratio between underlying and actual inflation in Norway. While there are no clear signs that headline inflation should dramatically increase (the ratio of underlying to actual inflation is close to one and its average over the sample period), inflation may pick up in those sectors—such as alcoholic beverages and tobacco, clothing and footwear,4 recreation and communication services, and the miscellaneous category—in which inflationary pressures have mounted as indicated by a ratio above its average and/or above its current level.5 This would mean that idiosyncratic influences, which have contributed to lower inflation in these sectors, would dissipate, consistent with the view that they affect inflation only in the shorter term.

13. A cross-country analysis reveals that underlying inflation in Norway explains somewhat less than the average 65 percent of the variability of actual inflation for the whole panel (Table 2). Variation across countries indicates that idiosyncratic shocks can have substantial impact on local inflation developments. Figure 7 shows that, compared to Norway, EU15 countries as a group appear to face stronger underlying inflationary pressures. Finally, Figure 8 plots openness—proxied by the ratio of trade in goods and services to GDP—against the share of total variability accounted for by the underlying component of inflation, providing some evidence that the explanatory power of underlying inflation would increase with country’s openness.

14. “With the substantial number of businesses now facing capacity constraints, we can expect inflation to pick up. It is uncertain whether inflation will then rise quickly or only gradually near target.”6 The analysis of common and idiosyncratic components of inflation in this chapter confirms that inflationary pressures in Norway mounted in 2006. In fact, a comparison among underlying inflation, as defined in this chapter, and various measures of core inflation (CPI-ATE, CPI-AE, CPI-AEL) suggests that the rise in inflation may gain momentum, pointing to the need for additional caution in conducting monetary policy.

In addition to Norway, the sample comprises EU15 countries, Canada, Japan, and the U.S.

For Norway, different price indices were included in the data set in addition to the harmonized CPI index: the CPI-ATE, the CPI-AE, the CPI-AEL, and the all-items CPI (1998=100). All originally nonseasonally adjusted series were adjusted using additive Census X12.

The average ratio for this item of the CPI index would be 0.98 if 2001 were dropped.

The impact on headline inflation will, of course, depend on the specific weight each item has in the CPI index.

From the address by Governor Gjedrem at the meeting of the Supervisory Council of Norges Bank on Thursday, 15 February, 2007.

Unless otherwise specified, GDP in this paper refers to mainland GDP, which is all domestic production except from exploration of crude oil and natural gas, services activities incidental to oil and gas, and transport via pipelines; and ocean transport.

Norway has been one of the first oil-producing countries measuring its fiscal policy stance based on non-oil budget balances. See Barnett and Ossowski (2003) on why this approach is more appropriate for countries with exhaustible resources.

The alternative rules are not necessarily meant to be welfare optimizing. This paper does not analyze inter-generational equity impact of these alternative rules. Heide and others (2006) argue that higher pre-funding of future spending favors future generations, who would be better off even without such redistribution because of economic growth.

For the derivation of Equation (1), and its application to a number of oil producing countries, see, for example, Barnett and Ossowski (2003), Leigh and Olters (2006), and Carcillo, Leigh, and Villafuerte (2007). Tersman (1991) applies a similar framework for Norway.

See IMF (2006) for recommendations to Gabon made in the context of the 2006 Article IV consultations.

In particular, monetary policy follows a forward-looking reaction function that targets the one-year ahead forecast of domestic inflation, and contains an interest rate inertia component in line with the monetary policy literature.

Note, however, that households without access to financial markets do not increase consumption in response to the future expected reduction in the tax burden. 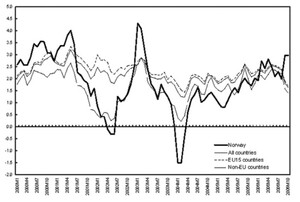 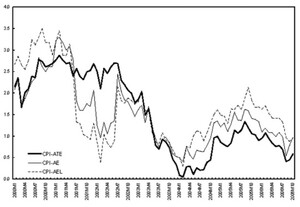 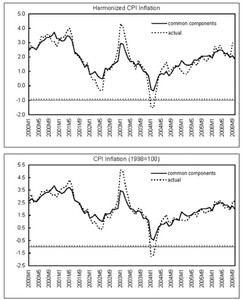 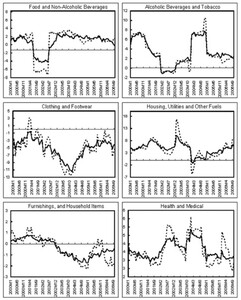 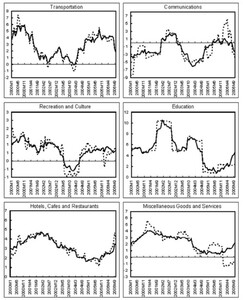 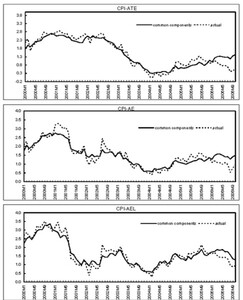 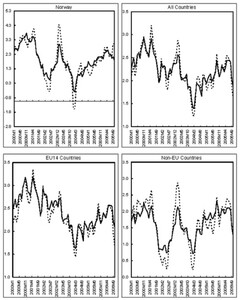 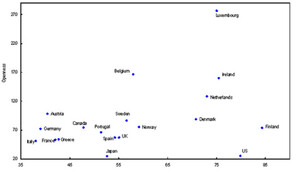