III. Flattening of the Phillips Curve: Implications for Monetary Policy1

1. Globalization is widely seen as one of the forces behind the weakening link between inflation and measures of economic slack in the UK. Since the early 1990s, inflation in the UK has remained low and steady, and its correlation with measures of economic slack has weakened (the link between these variables is often referred to as “the short-run Phillips curve,” Figure 1). Flattening of the Phillips curve has been observed in other industrial countries as well and has been attributed, in part, to globalization forces.2 Due to increased competition from abroad, businesses have less scope to raise prices when demand rises. Increased trade and investment flows have made goods prices less sensitive to domestic demand pressures. Indeed, goods price inflation has borne very little relationship to estimates of demand pressures in the UK over the last decade. More recently, labor mobility has also increased. This could lead to further flattening of the Phillips curve if it results in declining sensitivity of service sector wages and prices to demand shifts.

2. What are implications of a flattening of the Phillips curve for monetary policy? On one hand, the reduced sensitivity of inflation to demand shocks makes the central bankers’ job easier, since they need to worry less about temporary imbalances between demand and supply. On the other hand, responding to inflation shocks becomes more difficult - the central bank needs to move interest rates and aggregate demand more to bring inflation back to target. This paper will explore how the flattening of the Phillips curve affects the optimal monetary policy response to shocks.

3. The analysis is conducted using a small macroeconomic model with rational expectations, which captures the key channels of monetary policy transmission. The behavioral equations for the UK consist of an output gap equation, an inflation equation (expectations-augmented Phillips curve), an interest-parity exchange rate relationship, and a monetary policy response function (an instrumental rule which relates the nominal interest rate to the expected deviation of inflation from target and the output gap). A full description of the model is presented in (Berg et al., 2006). The UK is treated as a small open economy, with a foreign sector comprising of a weighted average of the euro area and the United States. The foreign sector is described by equations for the output gap, inflation, and the monetary policy reaction function. The models’ parameter values are estimated from quarterly data over the period 1993 to 2005, using a Bayesian approach (Geweke, 1999).

5. The dynamic adjustment of key macro variables after various shocks differs significantly under the two models. Demand shocks have much smaller effect on inflation under a flat Phillips curve. Therefore, interest rates need to move very little. The weak policy response makes the demand shock more persistent (the output gap volatility increases). Shocks to inflation cause greater volatility in both inflation and output, since unwinding the effect of such shocks requires more aggressive movement of interest rates and domestic demand. In the next section, this intuition is formalized (by presenting the efficient policy frontiers), and the interest rate rules that best match the policymakers’ preferences over inflation and output gap variability are derived for both models.

7. The achievable combinations of inflation and output variability are less favorable when the Phillips curve is flatter (Figure 2). The central bank needs to generate greater volatility in the real economy to achieve any desired level of inflation variability (and vice versa). The choice of location along the frontier depends on the specific policy preferences. The coefficients in the optimized rules for several typical specifications of policy preferences are shown in Table 1. The preferences considered are equal distaste for inflation and output variability, increasingly greater distaste for inflation variability, and increasingly greater distaste for output variability. In practice all central banks, including those with inflation targeting regimes, care to some extent about variability in the real economy, so the coefficient on the output gap is always greater than zero (Bernanke, 2003). A fixed weight is assigned to the variability of interest rates in all scenarios.

Note: The first two columns specify the preferences of the authorites over the variability of deviations of inflation from target and the output gap.
Table 1.

Note: The first two columns specify the preferences of the authorites over the variability of deviations of inflation from target and the output gap.

8. The direction of change in the optimized coefficients of the interest rate rule is consistent across these preferences. When the responsiveness of inflation to demand pressures declines, the optimal coefficient on the expected inflation deviation from target declines, while the optimal coefficient on the output gap increases.3 What is the intuition? In a flat Phillips curve environment, policymakers would respond more actively to demand pressures to prevent them from affecting inflation (since that would costly to reverse). Such policy would reduce both inflation and output gap volatility after a shock to aggregate demand. On the other hand, the response to inflation shocks is attenuated, since unwinding the shock quickly entails greater output gap variability. In that case, the optimized policy will reduce output gap volatility, but inflation will take longer to go back to target. On balance, adjusting the interest rate rule in a way that is optimal for the new structure of the economy would reduce volatility in the real economy and, in some cases, the volatility of inflation, compared to maintaining an unchanged rule.

9. What are the implications of the optimized rule for the actual nominal interest rate movement? Figure 3 illustrates the nominal interest rate move after a shock to inflation under the two possible structures of the economy.4 The dotted line is the optimal response under a steep Phillips curve, while the solid line shows the optimized response under a flat Phillips curve. Even thought the policymaker reacts less aggressively to any given deviation in inflation from target when the Phillips curve is flatter, after an inflation shock the cumulative increase in the interest rates (both nominal and real) would be greater, since inflation would stay above target longer. After a demand shock, the reverse holds true: interest rates would move less, since the expected deviation of inflation from target is smaller.

10. These results hold as long as inflation expectations remain anchored. Under a flatter Phillips curve, inflation goes back to target more slowly than before after a shock to inflation (even for unchanged policy). For expectations to remain anchored, people must understand that this is a natural consequence of the structural change in the economy, and not a reflection of the ability of the policymaker to affect inflation. Enhancing the public understanding of the effect of structural changes (and possible policy changes) through communication is important to keep expectations anchored. If expectations are influenced by the actual deviations of inflation from target, the monetary policy response to inflation shocks would be more aggressive than the optimal response under stable expectations.

11. This paper sheds light on the monetary policy implications of a particular structural change – reduction in the responsiveness of inflation to domestic demand pressures. The main findings are the following:

Prepared by Dora Iakova. A more detailed version of this paper is forthcoming as an IMF Working Paper.

(Borio and Filardo, 2006), and (Mody and Ohnsorge, 2006) provide empirical cross-country evidence for globalization-related flattening of the Phillips curve. Over the last few months, the issue has come up in numerous speeches by monetary policymakers, including Charles Bean, Donald Kohn (Boston Fed Governor), and Lucas Papademos (ECB Vice President).

The central bank is assumed to have greater dislike for inflation variability relative to output gap variability in the illustrated scenario (the ratio λπ/λу is 3).

Flattening of the Phillips Curve

Impulse Responses to an Inflation Shock 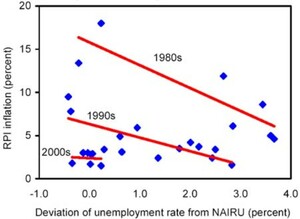 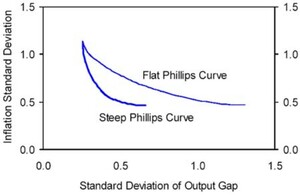 Note: The first two columns specify the preferences of the authorites over the variability of deviations of inflation from target and the output gap.