II. The Macroeconomic Effects of Immigration in the U.K.1

1. The United Kingdom was one of the first countries to allow the new EU members immediate access to its labor markets after their accession in May 2004.2 The transitional arrangements set out in the Accession Treaty allow countries to choose to limit free labor movement for a period of up to 7 years, with reviews of the policy after the second and fifth years. Only Ireland, the U.K., and Sweden chose not to impose restrictions in 2004. In the summer of 2006, Greece, Portugal, Finland, and Spain also decided to lift all restrictions for the ten accession countries, and six other member states adopted a more liberal policy. The U.K. will also accept workers from Bulgaria and Romania starting in 2007, although subject to tight quantity restrictions.

2. Although the existing statistics are imperfect, they suggest that a substantial number of workers from the new member states have arrived in the U.K. since May 2004. Data sources on immigration include the International Passenger Survey, the Worker Registration Scheme, and the Labor Force Survey.

3. Discussions of the macroeconomic effects of immigration have become a focus of policy and media attention, following this surge in labor flows. The effects on growth, wages, and unemployment are widely debated, even though the existing empirical evidence is still scarce. (Riley and Weale, 2006) estimate that the inflow of workers from the new member states in 2004 and 2005 has contributed 0.2 percent to GDP growth. Using regional data, (Gilpin et al., 2006) and (Blanchflower et al., 2007) find that immigration is not related to the rise in unemployment in 2005/06.

4. The existing theoretical and empirical literature on immigration is based almost exclusively on partial equilibrium, static models.3 These models, at best, provide guidance only to the expected short run effects on the labor market. Static analysis predicts that an increase in one factor of production reduces its relative price, therefore wages would fall after an increase in labor supply (or unemployment would rise in the presence of wage rigidities). Since accession-related migration is a truly exogenous shock to labor supply, mild initial downward pressure on wages might appear. However, open economies adjust dynamically, and the long-term effects on the labor market are likely to differ from the short-term effects.

5. Using a general equilibrium dynamic model, this paper explores the likely evolution of the economy after a rise in immigration. The model has an overlapping-generations structure, calibrated to reflect the demographic profile of the United Kingdom. The following questions are addressed. What is the impact of immigration on economic growth, capital accumulation, consumption, and the current account? Do the short-term macroeconomic effects of an immigration shock differ from the long-run effects?

B. Description of the Model

6. The analysis is based on Multimod—a dynamic general equilibrium model with demographic features.4 Consumers are assumed to have a finite planning horizon, which affects their consumption/savings decisions. The production function is of the simple Cobb-Douglas type, with capital and homogeneous labor as the factors of production. Investment behavior is based on the Tobin’s Q-theory—investment growth accelerates when the expected marginal product of capital is greater than its cost. Perfect capital markets are assumed, allowing firms to borrow freely at the world interest rate. An endogenous tax rate ensures that the ratio of government debt to GDP converges to a target level.

7. Demographic developments affect both the supply and the demand sides of the economy. On the supply side, earnings are presumed to be a good indicator of changes in relative productivity and labor supply that occur over an individual’s working life. The pattern of earnings over time is hump-shaped—as workers accumulate experience, their productivity and earnings increase. After peaking in middle age, earnings gradually decline into retirement. The rate of participation in the labor market follows a similar pattern. Changes in the age structure of the population will thus affect the effective labor supply. On the demand side, individuals are assumed to smooth consumption based on their anticipated life-cycle income. Younger individuals tend to be net borrowers, since their current income is below their permanent income. Middle-age individuals, whose relative earning are at their peak, save for retirement. Therefore, changes in the age profile of the population will also have an impact on aggregate consumption and savings.

8. The baseline scenario is calibrated to reflect broadly the main features of the UK economy. The age-earnings profiles for the U.K. are presented in Figure 1. They are estimated using data on actual hourly earnings from the Annual Survey of Hours and Earnings for the period 1998–2005. An exponential function is fitted through the age-earnings profiles to approximate the time-series pattern of a person’s lifetime earnings. The earnings are adjusted for the labor force participation rates of the different age cohorts (obtained from the Labor Force Survey), and normalized relative to the per capita earnings of the youngest cohort. The earnings profile thus represents the average earnings per person (not per worker) within each age category. All other parameters of the model have been set to match the respective U.K. values: the labor share of output is 69 percent, the steady state capital-output ratio is 2.3, total factor productivity growth is 1.3 percent, and the long-run real interest rate is assumed to be 4 percent. Since the results are presented in deviations from the baseline, they are quite robust to changes in the calibration parameters.

9. An immigration shock is introduced into the model as an increase in the number of young workers in the economy. This is based on existing empirical evidence for the U.K. and Ireland, which suggests that more than 80 percent of the new A8 immigrants are between 18 and 34 years of age, and practically all are employed. Based on the latest Home Office Accession Monitoring Report (November 2006), 43 percent of all WRS applicants were aged between 18 and 24, and further 39 percent were between 25 and 34. Virtually all are working – 98 percent of applications for National Insurance Numbers made by accession country nationals in the two years after accession were for employment purposes.5

10. The size of the immigration shock is chosen to broadly match the recent U.K. experience and academic estimates of the total migration potential from the new member countries. Specifically, it is assumed that 100,000 young workers from the new member states entered permanently the U.K. labor market in 2005 and 2006 respectively.6 A gradual reduction in net migration is assumed over the next ten years as other countries open their labor markets and the number of potential immigrants declines (see Figure 2). Estimates of both actual and potential migration are highly uncertain, so this scenario should be taken only as an illustration and should not be interpreted as a forecast or a judgment on the actual migration flows.

11. The immigration shock is modeled as an exogenous increase of the number of young workers.7 The simulations are performed in two steps. First, a current population projections scenario is estimated (based on the 2004 Government Actuary Department population projections). Next, an immigration shock is introduced and the results are compared to the baseline simulation. The results are presented in Figure 3 (expressed in percentage point deviations from the no-immigration baseline).

15. The results are sensitive to some of the assumptions in the model. First, immigrants are assumed to have exactly the same skill distribution and productivity as the native workers. While this is broadly true for the stock of immigrants in the U.K. (see Salt and Millar, 2006), the sectoral distribution of immigrants from the new member states suggest that they may be less skilled than the average worker. That would reduce the estimated effects. Second, the model assumes perfect flexibility in the labor and goods markets: there is no unemployment and economic output is continuously at potential. Relaxation of these assumptions could influence the adjustment dynamics. For example, the minimum wage sets a floor on the adjustment of real wages in some unskilled occupations. That could lead to a temporary rise in unemployment. Third, the production function is assumed to be Cobb-Douglas. Changing the form of the production function (for example allowing for worker complimentarity)9 could produce higher positive effects. Finally, the magnitude of the macroeconomics effects are proportional to assumed size of the migration shock: if the model is extended to include a fixed factor of production (land), the effects would vary with the size of the shock.

16. The results of this analysis suggest that the macroeconomic effects of an immigration shock are broadly favorable. Both total and per capita output and consumption increase in the medium term (as immigrants become more productive and investment growth accelerates). The current account initially deteriorates, but gradually improves relative to the no-immigration baseline. Any downward pressure on wage growth would be only temporary. As capital accumulates to meet the needs of the new workers, wages would grow in line with the rising marginal productivity of labor.

Prepared by Dora Iakova. A more detailed version of this paper is forthcoming as an IMF Working Paper.

Citizens of Cyprus and Malta were allowed to work in the U.K. prior to 2004, so the change in the regime applied only to the remaining eight accession countries (Estonia, Czech Republic, Hungary, Poland, Lithuania, Latvia, Slovenia, and Slovakia). They will be referred to as A8 in the rest of the text.

A recent exception is (Barrell et al., 2006). That study uses a general equilibrium macroeconomic model to illustrate the effects of changing net migration on output and unemployment in the U.K. and Germany.

See (Laxton et al., 1998) for a description of Multimod. (Faruqee and Laxton, 2000) and (Faruque, 2002) contain a detailed discussion of the demographics features of the model.

To prevent “welfare tourism”, the U.K. has restricted access to social benefits for new A8 immigrants during the first year of employment. That probably accounts for the fact that practically all immigrants hold jobs and the percentage on welfare is much smaller than that of the native population.

The assumed historical net migration is broadly based on the LFS statistics. The assumptions are made purely for illustrative purposes and do not represent a judgment on the actual net inflow.

It is appropriate to make this assumption here since A8 migration represents a truly exogenous shock, and its magnitude was largely unanticipated. Net migration from other countries is relatively steady and predictable, and is incorporated into the population and labor force projections made by the Office of National Statistics.

This result assumes that the new immigrants have the same labor participation profile, and the same productivity as an average person of that age. In fact, immigrants may have higher labor participation rate (at least initially). Taking this into account could reduce the magnitude of the initial mild decline in per capita output. However, it is reasonable to assume that, over time, the labor force participation rate of the immigrants will converge to that of the native population (that has been true for the older immigrant cohorts, see (Salt and Millar, 2006).

Both academic studies and the press often suggest that immigrants take jobs that are not attractive for the locals (or would not even exist if it was not for the immigrants). That increases the efficiency of the labor market and may induce an increase in the labor force participation of the local workers. That effect could be modeled as labor complimentarity in the production function. (Borjas, 2001) suggests another channel through which immigrants may improve economic efficiency—by locating in regions with the highest marginal product of labor.

(Deviations from a no-immigration baseline level) 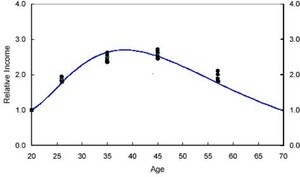 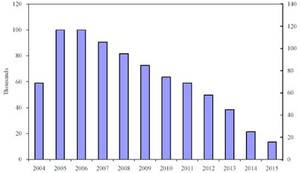