This report includes five background studies with emphasis on vulnerabilities and growth, the focus of the 2006 Article IV Consultation with Uruguay. Stocks of key financial balance sheet vulnerabilities are also discussed. With the appreciation of the peso since early 2004, the discussion on competitiveness has intensified. To assess competitiveness, the paper looks at balance of payments trends, the ratio of tradable to nontradable prices, cost and profitability measures, and real exchange rates and their alignment with purchasing power parity (PPP).

This report includes five background studies with emphasis on vulnerabilities and growth, the focus of the 2006 Article IV Consultation with Uruguay. Stocks of key financial balance sheet vulnerabilities are also discussed. With the appreciation of the peso since early 2004, the discussion on competitiveness has intensified. To assess competitiveness, the paper looks at balance of payments trends, the ratio of tradable to nontradable prices, cost and profitability measures, and real exchange rates and their alignment with purchasing power parity (PPP).

1. This chapter assesses Uruguay’s growth performance during the last decades. Average per capita growth in Uruguay since the 1960s has been low and volatile, both for regional and international standards. Periods of strong growth have been short-lasting and were followed by deep recessions, closely tracking developments in Argentina. The paper first briefly discusses Uruguay’s growth patterns, then reviews the findings from growth accounting studies and assesses the extent to which cross-country regressions explain Uruguay’s performance. It then looks more closely at the external factors that have impacted on Uruguay’s growth.

2. A key conclusion of the paper is that growth in Uruguay has been supported by increased openness, but adversely affected by the country’s exposure to shocks in the region. While policies have been put in place to reduce vulnerabilities, such as a flexible exchange rate regime, diversification of trade and strengthened prudential regulations for the financial system, external risks still remain considerable. Also, domestic factors such as low investment, less developed financial markets and, in the past, volatile fiscal policies have been important constraints to growth. Policies to further improve the investment climate and local capital markets, and consolidate macroeconomic stability will therefore also be key to strengthen Uruguay’s medium-term growth outlook.

B. Volatility and Growth Trends—The Facts

3. Average per capita growth in Uruguay has been low compared to countries outside the region, but also for Latin American standards. Within the region, Uruguay stands out with weak per capita growth in the 1960s; it started to catch up in the 1970s, after Uruguay had implemented market-oriented reforms and opened the economy up to trade. As elsewhere in Latin America, the 1982 debt crisis led to a deep recession in Uruguay, resulting in negative per capita growth during the 1980s. Positive growth has since resumed, but has remained significantly below both the region as well as the Asian and industrialized economies. As a result, Uruguay’s per capita income adjusted for purchasing power relative to the U.S. has fallen from 45 percent in 1960 to about 30 percent in 2000.

4. Uruguay’s economy has followed closely developments in its neighboring countries, particularly Argentina. While before the 1970s, Uruguay’s growth performance diverted from its neighboring countries, it has converged since, with Uruguay experiencing the same booms and busts as Argentina did. This may be related to increased regional financial and trade integration (deepened bilateral arrangements in 1985 and establishment of Mercosur in 1991), similar commodity export dependencies (beef and wool products), and similar exchange rate policies (Tablita, Argentine Convertibility Plan).

5. Uruguay’s growth has been highly volatile. Uruguay’s per capita growth has been more volatile than the Latin American average, and in particular compared to other economies outside the region. Volatility in Uruguay has significantly increased beginning in the 1980s, broadly in line with increased volatility in Argentina. This higher volatility could have negatively weighted on long-run growth, as suggested by several empirical studies (see, for example, Loayza et al. (2004)).

Volatility of GDP Per Capita Growth 1/

Volatility of GDP Per Capita Growth 1/

6. Growth accounting studies for Uruguay suggest that low physical factor accumulation was a factor limiting growth. For instance, estimates from Bosworth and Collins (2003) show that while annual total factor productivity (TFP) growth has been above Latin American averages, physical capital accumulation has fallen short, explaining Uruguay’s low growth performance. This is consistent with investment levels significantly below both regional and international standards. Further, when accounting for human capital measured by the years of schooling or labor income, De Brun (2001) and Fosattie Hughes et al. (2005) find that most of Uruguay’s TFP growth can be attributed to it.

Source: Data from Bosworth and Collins (2003)

Source: Data from Bosworth and Collins (2003)

7. Uruguay’s long-run growth performance is well explained by standard cross-country growth regressions (Table 1, Appendix). First, the relevance of key growth determinants as identified by Sala-i-Martin (2004) is tested in explaining Uruguay’s average growth performance during 1960–2000. Including variables such as the conditions in 1960 for income, education, the fraction of tropical area, the density of population in coastal areas, the share of mining in GDP and cost of investment, the years an economy has been open, about 55 percent of average cross-country growth in 1960–2000 can be explained. A dummy for Uruguay is included, which is statistically insignificant, pointing to the fact that Uruguay’s growth is well explained within the standard regression framework.

9. Adding these additional growth determinants to the cross-country regressions helps to further improve the fit of the model. In particular, the explanatory power increases significantly when external variables, such as the volatilities of the terms of trade and liquidity is added. Equations 2-12 point to the following correlations:

10. Increased openness has helped spur Uruguay’s growth. There is a large empirical literature suggesting that openness to trade and financial integration has a positive impact on growth. This is also supported by the cross-country regressions in the previous section. In Uruguay, international trade and financial integration increased significantly in the mid-1970s, when trade linkages with the region strengthened, tariff and non-tariff import barriers were reduced, and the capital account was opened. Following this, growth in Uruguay increased significantly, as it allowed Uruguay to benefit from economies of scale, efficiency gains from increased competition, strong external demand, and augmentation in financing. Economic openness has further increased since, initially with Mercosur during the 1990s, and since 2001 with deepening of trade relations with the U.S., the European Union and Mexico. Both imports and exports amounted to about 30 percent of GDP in 2005, making Uruguay a fairly open economy by regional and international standards.

11. At the same time, Uruguay’s openness and the structure of its economy have made it vulnerable to developments in the region, commodity prices, and international interest rates. In a nutshell, it features high export market concentration, high financial linkages, large real exchange rate volatility, commodity dependency and dollarization. While many vulnerabilities have been declining over the last years, they remain large relative to other economies.

Measures Taken to Reduce the Risks associated with Financial Linkages

14. Uruguay’s growth performance is characterized by low long-term rates, high volatility, and close correlation with Argentina. This pattern is well explained by domestic and external factors.

15. Recent policies have contributed to reduced external growth vulnerabilities, but need to be sustained into the medium term. Trade and financial dependencies to Argentina have been reduced by extending trade beyond Mercosur and by putting prudential regulations in the financial sector in place to internalize cross-boarder risks, but trade linkages to Argentina remain significant and non-resident deposits large. The high public debt has been set on a declining path, and Uruguay continues to rebuild reserves to strengthen its still relatively weak external liquidity position. Further, Uruguay, like its neighboring countries, has switched to a flexible exchange rate regime, reducing the risks of exchange rate overvaluation with possible adverse impacts on exports, and the risks of sudden corrections, which have often led to financial crises followed by deep drops in GDP. While much has been achieved, progress needs to continue to reduce the still significant medium-term risks to growth.

16. Also, further improving domestic conditions would be important to achieve lasting growth. This covers improving the investment climate, including by strengthening the bankruptcy framework and establishing and establishing a private sector relations office, deepening local capital markets, and consolidating macroeconomic stability. The government is also advancing important structural fiscal reforms to ensure a stable fiscal framework and increase room for public investment in the budget. A tax reform is expected to be adopted over the next months which would improve the structure and efficiency of the tax system. Also, Uruguay is working toward private participation in public infrastructure projects, which should further spur efficiency and help increase investment, and is planning to strengthen government procurement procedures.

Brazilian consumption was not significant in the long-term cointegrating relationship and thus excluded. This is in line with the findings of Fossati Hughes et al. (2005). Also, Masoller (1998) finds that Uruguay’s GDP is mainly explained by Argentine consumption.

Exports to the Region

(in percent of total exports)

GDP in Uruguay and Real Consumption in Argentina

Accumulated Response of GDP to Cholesky One S.D. Innovations 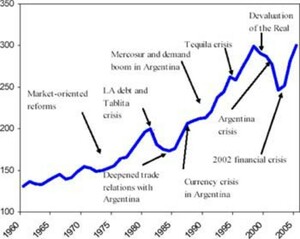 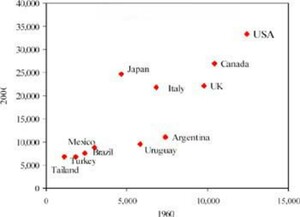 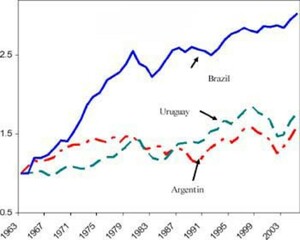 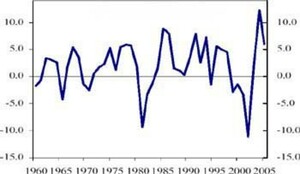 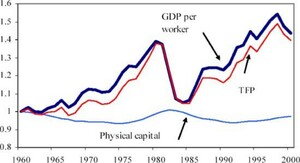 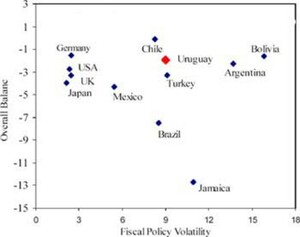 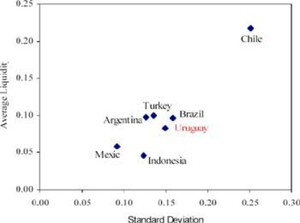 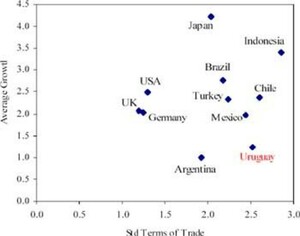 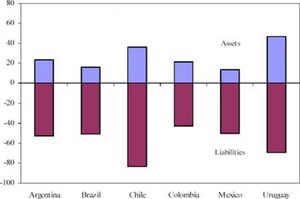 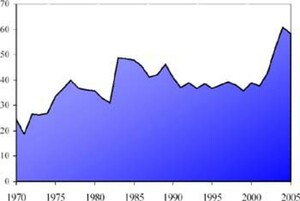 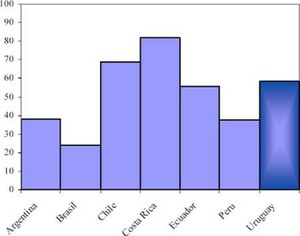 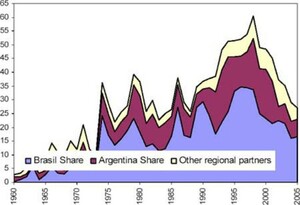 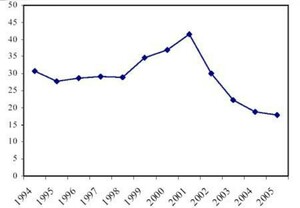 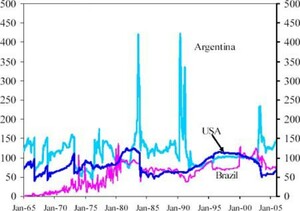 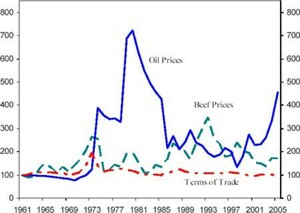 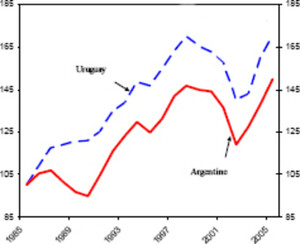 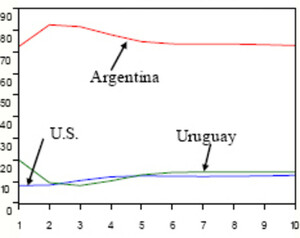 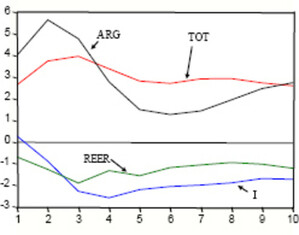 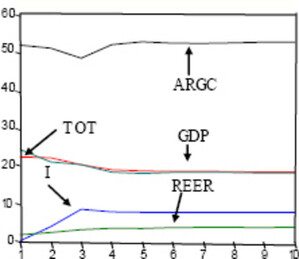