The analysis of inflation developments in Belarus is hampered by widespread price controls. Persistence of common inflation is generally higher than that of actual inflation. Factor analysis assumes that covariation among time series can be explained by a few unobserved shocks (factors). The dependent variable in our estimations is growth in real GDP per capita in purchasing power parity (PPP) terms, while the explanatory variable of interest is the annual rate of change in the terms of trade.

The analysis of inflation developments in Belarus is hampered by widespread price controls. Persistence of common inflation is generally higher than that of actual inflation. Factor analysis assumes that covariation among time series can be explained by a few unobserved shocks (factors). The dependent variable in our estimations is growth in real GDP per capita in purchasing power parity (PPP) terms, while the explanatory variable of interest is the annual rate of change in the terms of trade.

I. Common and Idiosyncratic Determinants of Inflation1

1. Inflation has fallen across many Eastern European and transition countries over the past few years (Figure 1). While starting from different levels, by end-2005, seasonally-adjusted monthly inflation had dropped on average by half in countries such as Belarus, Czech Republic, Estonia, Hungary, Poland, Romania, Russia, and the Slovak Republic. By contrast, inflation remains higher in Bulgaria, Latvia, Lithuania, and Ukraine when compared to 2001, with an average increase in seasonally-adjusted monthly inflation rates of about 65 percent. With regard to Belarus, a large output gap has allowed strong noninflationary growth; however, pervasive price controls are likely to have played a role in explaining inflation developments.

2. Several factors can explain inflation over time. Money growth is uncontroversially one of these factors. In transition economies, it fueled inflation early on when fiscal obligations were monetized and lack of a credible fiscal stance contributed to the deterioration of market confidence, thus increasing velocity. Wage growth, beyond productivity gains, impacts prices not only directly by increasing costs, but also indirectly by raising domestic demand. This is particularly relevant in countries in which the share of wages in household disposable income is relatively high, and household expenditure is biased toward basic items, which usually comprise the largest component in the CPI basket. The output gap would affect the likelihood that bottlenecks put upward pressures on prices in specific sectors. Real exchange rate appreciation, owing to Balassa-Samuelson effects and/or simply to surges in domestic absorption stemming from higher levels of income, would also trigger inflation in cases in which these pressures are not accommodated through nominal appreciation. Inflationary pressures could also result from relative price adjustments with downward price rigidity while structural reforms are being implemented and both supply and demand adjust during transition.

3. Some factors are common across countries or sectors. These factors are unobserved shocks that drive the underlying inflation process and are common (correlated) across countries or sectors, although their impact depends on their individual “load” and differences in economic structures and policies. In countries in which significant economic convergence has been achieved, a limited number of similar forces are likely to drive inflation at a certain point in time: an oil shock could be an example of the same exogenous force that affects countries/sectors. Some factors are country- or sector-specific. At any point in time, inflation may be driven by shocks that impact a single country—for instance, a correction in energy prices relative to international market prices—and by policies—monetary, fiscal and exchange rate policies—and/or conditions—price controls, relative price adjustments, degree of competition—that are specific to each country or sector. These idiosyncratic factors, by definition, are uncorrelated with common factors.

4. The analysis of inflation developments in Belarus is hampered by widespread price controls. The share of goods and services subject to direct price control reached over 35 percent in 2005, and included food items, and communal and transportation services. In 2005, the Council of Ministers issued a decree that set monthly marginal price increases (0.6–0.8 percent) for all goods and services produced and sold in Belarus, with very limited exceptions. All enterprises seeking higher than marginal price increases need to apply to the local authorities, who may reject the application. Violation of the price registration mechanism may result in fines, sanctions, and business closure. In addition, the government continues to limit profit margins on socially important goods and the majority of food articles in the consumer basket. This would clearly be a feature that is specific to Belarus. In these circumstances, actual inflation may not fully reflect underlying inflationary pressures. Therefore, distinguishing among common and idiosyncratic determinants of inflation appears a promising starting point for analyzing the inflation process.

The chapter is organized as follows. Section B briefly presents the data and the generalized dynamic factor model methodology. Section C reports the results. Section D focuses on inflation forecasts for Belarus, while Section E concludes.

5. Factor analysis assumes that covariation among time series can be explained by a few unobserved shocks (factors). In factors models, therefore, a large number of covarying series are transformed into a smaller number of unobserved orthogonal series (common components) so as that each additional factor (component) explains as much as possible of the remaining variation in the observed series. The observed series is then represented as the sum of the common component, which can be interpreted as underlying inflation, and of a disturbance term (idiosyncratic component), which is uncorrelated with the common component.

6. The analysis in this chapter is based on an application of the generalized dynamic factor model (GDFM) proposed by Forni and others (2000 and 2001).2 This is a statistical approach that extends principal component analysis and Stock and Watson’s (1989) coincident and leading indicator approach. The basic framework is that of a dynamic factor model in which the assumption of mutually orthogonal idiosyncratic components is relaxed to allow for some mild cross correlation. Underlying inflation is therefore assumed to be proxied by a common component, which is driven by a small number of common factors. These factors are the same across the countries, although potentially impacting inflation differently in each country (different coefficients or “loads”).

7. The dataset comprises a panel of 12 countries, and 223 monthly series of CPI indices and their components over the period 2001–05. Factor models can accommodate large panels and overcome the problem inherent in multivariate analysis when the time dimension is smaller than the cross-country dimension. The data set contains seasonally adjusted monthly inflation from January 2001 through December 2005, both for headline CPI inflation and for its components, for 12 Eastern European and transition countries, with over 13,000 data points.3 The sources are the Harmonized Index of Consumer Prices (HICP) and national statistics. All 223 series were tested for unit roots; 15 CPI components in various countries turned out to be nonstationary and were dropped from the dataset for the estimation.

8. The first step in the analysis is to determine the number of common factors. A principal component analysis of the spectral density matrices of the data (Figure 2) shows the share of the cumulative variance (cumulative eigenvalues) of the series that is explained by each successive principal components (eigenvector). Different thresholds can be set to identify the number of common factors (components): here, this is chosen by stopping at the factor (eigenvalue) that improves upon the explained cumulative data variability by less than 10 percent at all frequencies. This yields four dynamic common components, which explain bout 75 percent of the total data variability.

9. The next step is to determine the number of static factors. The relation among static and common factors, and lags is given by:

number of static factors=number of common factors * (1+number of lags).4

10. Applying the GDFM to our dataset decomposes inflation in the 12 countries in the sample into common and idiosyncratic components.5 Figure 3 plots headline CPI common (underlying) and actual inflation for each country. The common component of each country’s inflation—that is, that part of inflation that is explained by shocks that are shared across countries and sectors—tracks movements in headline inflation while smoothing it by eliminating cross-section and cross-country disturbances. Common inflation explain over 35 percent of the variability of actual inflation for the whole panel (Table 1). Across countries, however, common components tend to account for a somewhat larger share of actual inflation variability in Belarus, Russia, and Ukraine (Group A), indicating that idiosyncratic shocks are relatively less important in these countries.

11. Persistence of common inflation is generally higher than that of actual inflation (Table 2). Persistence is proxied by the half life of a unit shock, which indicates the length of time necessary to halve the magnitude of the original shock to inflation. It is calculated as:

where, β is derived by estimating a simple regression of the monthly seasonally-adjusted headline CPI inflation on its lag and a constant: πt = α + βπt−1 + εt. The fact that common inflation shows higher persistence suggests that relative price adjustments, Balassa-Samuelson effects, and, more generally, structural transformation may not have fully run their course.6

15. Based on the analysis of common and idiosyncratic components of inflation in Belarus, several preliminary conclusions are possible. First, inflationary pressures appear to have mounted in 2005. In fact, underlying inflation appears to be above actual inflation by more than at any time over the last five years. At the same time, price controls may now play a bigger role in masking these inflationary pressures.

16. From an analytical standpoint, it would be interesting to compare underlying inflation, as derived in this paper, with other concepts of underlying inflation such as “core” inflation, trimmed mean, and the median. All of these are useful indicators of inflationary pressures that could inform the NBRB’s monetary policy stance.

17. More generally, it would be interesting to regress underlying inflation, as derived in this paper, on demand and supply side variables and test their explanatory power. For instance, Chernookiy (2004) could be re-estimated with the common component series derived here.

18. Finally, while common components explain roughly a similar proportion of inflation variability across countries in the panel, the levels of common inflation across countries differ. This could reflect the way (load) common factors impact inflation in each country, which ultimately depends on the structure of the economy, including the exchange rate regime, production technologies, relative prices, and other catching up issues. To assess these channels, a series of fixed-effects panel regressions could be performed, which would regress common inflation differentials on a series of explanatory variables that proxies the structural and policy framework.

See Forni and others (2003) for a definition of the relationship.

See Coorey and others (1996) for a discussion of the role of relative price adjustments.

The ARIMA specification includes a constant and the dependent variable (idiosyncratic inflation) with 1 and 12 lags.

In estimating the standard errors, the lag length is set to a maximum of five years.

The negative coefficient on “TOT change” is for a notional country that is totally closed and outside of the ECA region (see footnote 3). Let TOT change = X1. The country-specific terms of trade elasticity can be calculated as -0.067*X1 + 0.08*X1*ECA + 0.0013*X1*openness.

A regression (not reported) including both the ECA and the CIS dummies further indicates that the results for the ECA region to a large extent are driven by the CIS countries excluding Russia.

As a proxy in the regressions, we use the “Regulatory Quality” indicator developed by Kaufmann and others (2005), which measures the incidence of market-unfriendly policies, such as price controls or inadequate bank supervision, as well as perceptions of the burdens imposed by excessive regulation in areas such as foreign trade and business development. 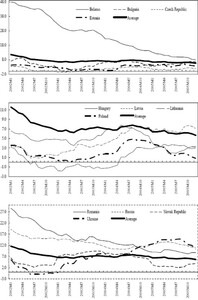 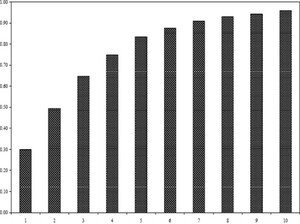 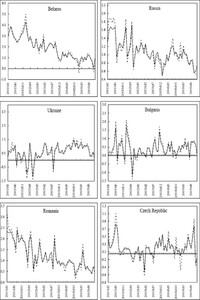 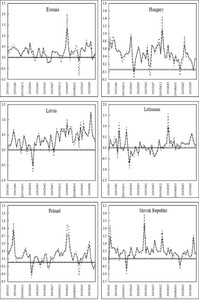 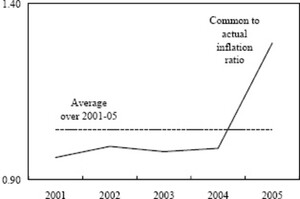 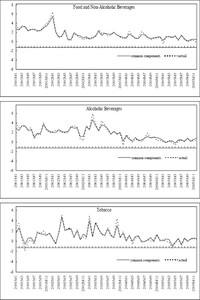 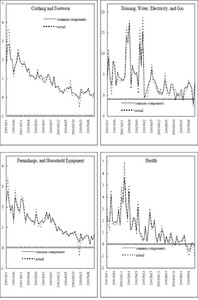 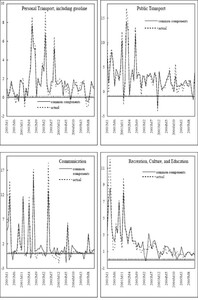 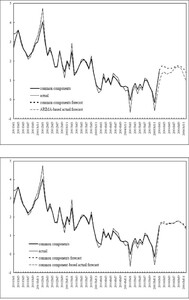 Powered by PubFactory
Close
Table A2.