VI. Structural Change and Competition Among Auto Manufacturers and Airlines37

1. The weak performance of the U.S. auto manufacturing and air transportation industries has raised questions regarding their systematic importance. Two of the major domestic car manufacturers and their financing subsidiaries account for about 10 percent of outstanding high-yield debt (J.P. Morgan, 2005). The automotive industry also accounts for nearly 6 percent of single-employer, defined-benefit pension plan participants insured by the Pension Benefit Guaranty Corporation (PBGC), while the air transportation industry accounts for 2 percent (PBGC, 2005a).

2. The macroeconomic significance of these sectors has fallen, in part reflecting heavy losses. The two industries each account for about ½–1 percent of total value added, and similar shares of employment. Both industries have experienced especially difficult times in recent years. Profitability in the auto industry has continued its decades-long downward trend; airline profits, which have been below average for some time already, also took a sharp dive in the last few years (Figure 1). Although the overall macroeconomic impact of further decline in these sectors would likely be limited, further wage, benefit and employment losses among auto and airline workers could intensify a debate regarding the rising exposure of individuals to economic and financial risks.

B. An Anatomy of Losses

3. Several factors have contributed to recent losses among auto manufacturers and airlines:

4. Despite new sources of competition, spare capacity doesn’t appear to be an industry-wide problem in either sector. Capacity utilization among auto manufacturers has been higher than in overall manufacturing, while among airlines, capacity utilization as measured by the “passenger load factor”—the percent of seats filled by paying passengers—has risen by 20 percentage points since the early 1990s, at both legacy and low-cost airlines (Figure 5).

5. In response, both sectors have cut payrolls and raised productivity, but not enough to restore profitability. In both the auto and airline sector, the number of employees has fallen at an annual rate of around 4 percent since 2000, compared with largely unchanged payrolls in the economy as a whole. Firms in both sectors have also negotiated reductions in compensation of employees. As a result, productivity growth has remained robust despite weakness in revenues, and unit labor costs have been cut (Figure 6).

6. Foreign auto companies have increasingly supplanted domestic companies in the U.S. market. Having enjoyed higher profitability in the 1990s, the three major domestic auto companies have struggled to break even in recent years while their four largest Asian competitors remained profitable (Figure 7). The foreign firms appear to have attained higher vehicle quality and a better brand image than domestic firms—illustrated by the fact that average prices are about $2,000 higher per vehicle for a standard model (Moody’s, 2005, McKinsey Global Institute, 2005). Customer satisfaction and resale value of the vehicles of foreign companies have also been consistently higher (Moody’s, 2005, Sloan, 2006).

7. Partly as a result, foreign car companies have maintained healthier credit ratings and financial ratios in recent years. The four largest Asian firms, for example, have all improved their credit ratings since 2000, while two of the three major domestic firms have seen their rating fall by eight steps from investment grade to “junk” status. The competitive advantage of foreign firms extends to their U.S.-based operations. While domestic firms have reduced their North America-based production by 2 percent per year since 1997, foreign firms have expanded their North America-based production by 6 percent per year, with their share of total U.S. production rising from 20 percent to 30 percent.

9. In both industries, less profitable firms have clung to outdated business models and face significant costs related to pension and health benefits:

10. The overall macroeconomic effects of further difficulties in the domestic auto and airline sectors would likely be manageable. Airlines are a small proportion of the economy, and the importance of auto manufacturers has already been in decline for some time. Moreover, the presence of healthy firms in each industry means that, from a macroeconomic perspective, difficulties at any firms could be offset to some extent by expanding capacity at others—as is currently occurring—or takeover of weak firms by strong ones. Even the unfunded pension liabilities covered by the PBGC represent a relatively small risk to fiscal outlays, given that losses would likely be spread over several years.

11. However, recent cutbacks of promised pension and health benefits highlight the broader issue of how workers and firms will adapt to a world of global competition. Recently-approved legislation to increase PBGC premiums and index them to inflation will limit risks to the PBGC but impose a further burden on firms with underfunded defined-benefit plans. This could accelerate the trend toward defined-contribution pension plans which, combined with the declining generosity of worker and retiree health benefits, transfers risk from firms to individuals.

“Legacy airlines” refers to the six large, national carriers (historical data includes a seventh, which in 2001 was taken over by one of the other six). “Low-cost airlines” refers to seven, mostly smaller, national carriers. “Regional airlines”—smaller carriers that do not maintain a national flight network—are not included in the analysis. See GAO (2004) for a detailed description, as well as a thorough analysis of competition among airlines.

Auto manufacturers: Net income as a share of operating revenues

Airlines: Net income as a share of operating revenues 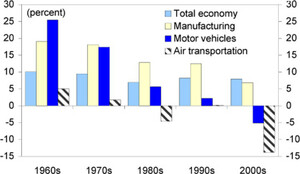 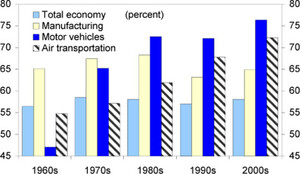 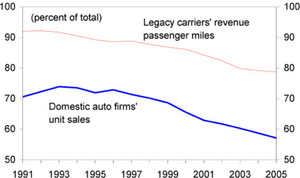 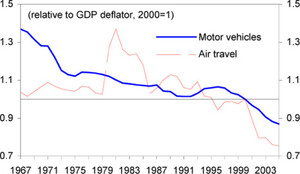 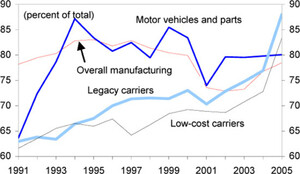 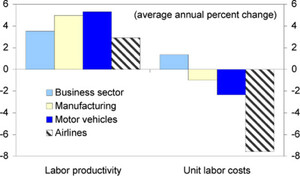 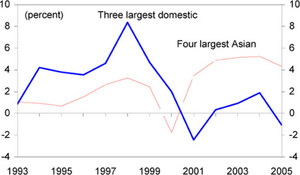 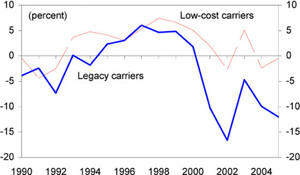