IV. Recent Oil Price Developments and the Performance of the U.S. Economy23

1. The substantial rise in crude oil prices since the beginning of 2003 has raised concerns about the risks to U.S. growth and inflation. These stem, in part, from the fact that the oil price shocks of 1973, 1981, and 1991 were all followed by recessions. Since the United States is a net importer of crude oil, higher crude oil prices act like an excise tax on domestic consumers, reducing disposable income available for non-fuel consumption with no offsetting benefits for domestic producers. For example, given the level of crude oil imports by the U. S. in 2005, consumers paid an effective “tax” of about 0.6 percent of GDP in 2005.24 With respect to inflation, crude oil price increases also add directly to headline inflation, potentially raising the need for tighter monetary policy to ward off any second round effects on core inflation.

2. The current oil price shock, however, appears to have had a limited impact on U.S. growth and inflation. Existing estimates of the relationship between U.S. economic growth and oil prices suggest a cumulative decline in annual GDP growth somewhere between 2 to 4 percentage points for the rise in crude oil prices since 2003 (e.g., Jones and others, 2004). However, U.S. output during 2004–05 was close to potential, while projected growth for 2006 remains healthy at 3.4 percent—a marginal decline compared with the 3.5 and 4.2 percent growth registered in 2005 and 2004 respectively.

A. Recent Developments in Crude Oil and Primary Commodity Markets

3. The global price of crude oil, as measured by the IMF average spot price, has more than doubled since 2003 (Figure 1). This increase was largely unexpected, reflecting, for the most part, an unprecedented surge in global crude oil consumption owing to robust global growth.25 Supply constraints also played a role, as evidenced by numerous geo-political tensions that threatened crude oil supplies at the same time that spare extraction capacity of Organization of Petroleum Exporting Countries (OPEC)—the swing producer in the global crude oil market—declined to unprecedented lows (IMF, 2005).

4. In contrast to previous price shocks, long-dated crude oil futures (i.e., market expectations for crude oil prices out to 2012) have also risen substantially since 2003. Perhaps more importantly, the long-end of the curve has remained at elevated levels since then, suggesting that the increase in crude oil prices has a sizable permanent component. If the current crude oil future price curve is any indication, the price of crude oil is projected to remain above US$65 per barrel at least until 2011, reflecting expectations of steady global oil demand growth, modest increases in crude oil production capacity, and uncertainty from geo-political risks.26

5. The rise in crude oil prices has led to substantial increases in petroleum product prices in the United States, notably in the price of gasoline. The increase in gasoline prices has been exacerbated by high refinery utilization rates and structural rigidities in the U. S. refinery sector that reduce its ability to respond to short-run market disturbances.27 As a result, U. S. gasoline prices have become more susceptible to shifts in the supply-demand balance—as the aftermath of Hurricane Katrina clearly demonstrated. Hurricane Katrina shut-in almost 25 percent of U.S. crude oil production and natural gas from the Gulf of Mexico, and reduced refinery capacity by 10–15 percent for an extended period.

6. The substantial rise in crude oil prices has also coincided with a generalized increase in the prices of other primary commodities. The IMF index of commodity prices has increased by approximately 110 percent since January 2003, while its energy component, which tracks crude oil, natural gas, and coal prices, has increased by approximately 140 percent. Generalized movements in primary commodity prices may have implications for future U. S. inflation—energy commodities, for example, account for roughly 5 percent of the U. S. consumer price index, while goods excluding food and energy account for approximately 22 percent.

7. The economic impact of the rise in crude oil prices in terms of lower output and higher inflation since 2003 appears to have been quite moderate so far. Indeed, the U. S. economy has moved closer to potential since 2003 and core inflation has been subdued. A number of explanations have been offered for the benign impact, including:

8. Other factors may have indirectly contributed to the benign impact of the higher crude oil prices, includingb:

9. Looking forward, however, many of the factors offsetting the negative impact of higher crude oil prices could wane. With the output gap closing in the United States, latent price pressures from other primary commodities may eventually appear. In particular:

10. U.S. energy policy has aimed at reducing the security-related and macroeconomic risks associated with high crude oil imports and moderating the environmental consequences of the energy intensity of the U.S. economy (Prust and Simard 2004). However, U.S. policy initiatives have generally downplayed the role of energy taxation to reduce. the demand for energy products. The focus, instead, has been on incentives toward boosting domestic energy supply and innovation to increase the efficiency of energy use.

11. Declining U.S. energy intensity has moderated the impact of higher crude oil prices on growth and inflation, and further declines could be encouraged through appropriate policy measures that reduce the demand for energy. If crude oil and gasoline prices remain at today’s elevated levels, past experience suggests that market participants will eventually switch to cheaper sources of energy, though the adjustment process may be long. The speed of the adjustment depends not only on relative prices, but also on the viability of alternative technologies and the extent to which market participants expect prices to remain permanently higher—the latter playing an especially important role. Increasing taxes on energy products if and when prices fall—notably gasoline taxes, which are presently low by international standards (Figure 3)—could help the process and encourage appropriate responses from consumers. While taxes could reduce demand in a cost-effective way (CBO, 2002), more stringent fuel-efficiency standards for cars and light trucks, through an incremental fix, could also be helpful to limit the growth in gasoline consumption.28 The Administration could also expand incentives for buying fuel efficient cars—the existing tax credit for hybrid cars is due to expire after automakers have sold 600,000 hybrid vehicles.

12. Given the high utilization rates in the refinery sector and recent sensitivity of gasoline prices to short-run disruptions to refinery capacity, additions to refinery capacity in the United States are being considered. Deregulation and low profits have combined to push the industry into consolidation and modernization, reducing overall refinery capacity to 17 million barrels per day by 2005 (compared to 19 billion barrels per day in 1981). However, trend growth in gasoline consumption has pushed refinery utilization rates to historical highs. Moreover, increasingly challenging fuel specifications—including the methyl tertiary butyl ether (MTBE) ban in several states—have added to the complexities of refining and distribution across state boundaries, preventing cross-boarder movements in gasoline supplies. To be sure, with returns to refining substantially above historical levels and future prospects sound, the market could easily be left to resolve the refinery shortage. However, with “time-to-completion” lags of between 5–7 years and tight federal regulations governing refineries additions and expansion, the Administration could streamline the approval process, and remove any obstacles that unnecessarily lengthen construction times. Acceptance of proposals for the construction of refineries could be facilitated by efforts to promote more efficient refinery technologies.

Prepared by Sam Ouliaris. This note has benefited from comments by Ravi Balakrishnan, Kornélia Krajnyák, and Martin Mühleisen.

The actual first-round impact is likely to be moderated by rising U.S. exports to oil exporting nations.

Early 2003 future curves for crude oil, which extended to 2008, failed to predict subsequent price increases. Also, the surge in global crude oil consumption was particularly evident in 2004, stemming from growth in the United States, China, and India.

For example, recent efforts to replace the Methyl tertiary butyl ether (MTBE) additive in gasoline with ethanol have been hampered by high refinery utilization rates in the United States, raising gasoline prices relative to the underlying price of crude oil.

A proposal to allow the Administration to tighten Corporate Average Fuel Economy without Congressional approval is presently being considered by the House of Representatives. 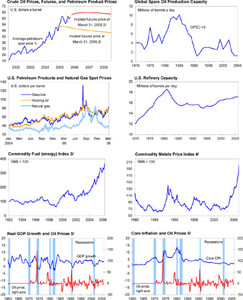 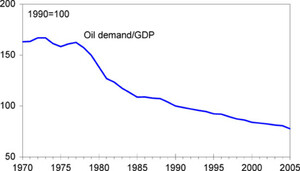 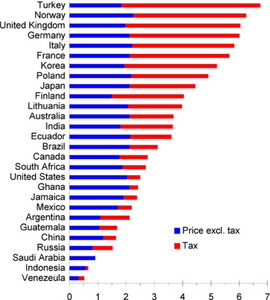