1. Cyclical developments in the U.S. labor market have been atypical in recent years. Aggregate employment and participation have tended to fall during a recession but quickly bounce back during recoveries (Figure 1). Despite a strong economic recovery since 2001, however, the bounce-back of labor markets failed to materialize, labor force participation has remained below its pre-recession level, and employment growth has been relatively sluggish.

2. The unusually low level of unemployment and participation rates raise questions on how much slack remains in the labor market. With the unemployment rate just a notch above 4½ percent but wide-spread wage pressures not in evidence, an accurate gauge of the extent of labor market “reserves” is crucial for policymakers.

3. This chapter reviews relevant findings of the recent academic literature. Particular attention is paid to the question whether the unusual behavior of the labor participation rate and employment growth reflects cyclical fluctuations or structural shifts with potential longterm implications.

4. Current research suggests that both cyclical and structural influences are behind low participation rates since the 2000–01 recession. Aaronson and others (2006b) found that tight labor markets in the late 1990s contributed to a strong increase in labor market participation, and sharply deteriorating labor market conditions played a part in the decline through 2003. In addition, there is a substantial body of work suggesting the presence of a number of structural factors.

5. Ongoing shifts in the age composition of the workforce tend to depress the aggregate participation rate. As labor market participation tends to be the highest for prime-age workers, and tapers off as workers get closer to retirement (Figure 2), a shift towards a larger share of mature workers may act as a drag on the aggregate participation rate.8 With the leading edge of the baby boomers just two years away from retirement, the ranks of mature workers have been swelling rapidly in recent years, and demographic change may have become a significant driver of changes in aggregate labor supply behavior.

7. The bulk of the decline in the aggregate participation rate appears to be related to weaker labor market participation of younger cohorts. The youngest age groups experienced the sharpest drop, although participation has also fallen for prime-age workers, particularly women (Figure 4). Elderly women have remained significantly more active in the labor market compared to 2000, however, helping to raise the participation rate of older workers by 4 percentage points over the past 5 years.

10. The rise in labor participation rates of older workers is largely seen as a response to structural factors. Long-term trends such as rising longevity, better health, higher educational achievement, and higher female participation among the baby boomers have facilitated labor market participation by older workers.12 In addition, ongoing health care cost increases, the weakening of company-based defined benefit pension plans, recent pensions scandals, and uncertainty regarding the Social Security system may have motivated workers to delay retirement.13 By contrast, the effects of the unwinding IT bubble—which impacted retirement assets—are seen as moderate, given that the share of significantly affected individuals appears to have been relatively small (Coile and Levin, 2006) and the subsequent housing boom has mitigated any negative wealth effects.

11. Employment growth has been unusually weak during the current recovery. Nonfarm payroll employment has grown by less than 2 percent since the cyclical trough in 2001, compared to 6 percent over a corresponding period in the early 1990s and around 12 percent on average in previous cycles. The weakness of employment has been most pronounced in manufacturing, but the service sector has also underperformed relative to previous upturns.

12. The lack of job growth is often attributed to the increased pace of structural change in the economy, but the empirical evidence is inconclusive. Structural change is characterized by permanent destruction of jobs in declining industries and creation of new jobs in emerging industries. Given the need for labor markets to adjust, structural change could have imposed a temporary drag on employment growth in recent years. However, the evidence for this hypothesis is mixed:

13. While outsourcing has grown considerably in recent years, the evidence supporting a significant impact on employment growth also remains limited:

14. The close correlation between employment and investment growth suggests that the sluggish recovery of the labor market may be related to unusually subdued investment (Figure 5). In the aftermath of the investment boom in the late 1990s, and in the face of larger economic and geopolitical uncertainties, firms appear to have become cautious both in their capital spending and hiring decisions. Therefore, the finding that many industries reduced employment levels both during and after the recession may less reflect structural factors than large adjustment needs in industries where capital spending and employment growth had been previously overambitious (Faberman, 2004; Cooper, 2006).

15. A number of structural factors are likely to restrain labor supply growth in the United States. Notwithstanding higher participation rates among the elderly, population ageing is likely to have slightly negative impact over the medium term, with the Bureau of Labor Statistics projecting to a fall in the overall participation rate of ½-1 percentage point. Youth participation could continue on its declining trend if school enrollment were to rise, reflecting likely increases in returns to schooling. Similarly, the trend rise in female labor participation may have come to an end, particularly as higher wealth and family incomes facilitate withdrawals from the labor force.

16. There is little evidence for structural factors behind the slow rate of employment growth in recent years, however. By contrast, there is some support for the hypothesis that low labor demand may be related to the unwinding of an investment and employment boom in the late 1990s. With the labor market expected to tighten once this adjustment has run its course, wage pressures could be expected to increase.

Immigrant labor has been the largest source of growth in the total labor force, accounting for about half of its increase since the beginning of the 1990s (Camarota, 2004). Between 2000 and 2005, the number of less-educated adult immigrants in the labor force increased by 1.6 million. By comparison, unemployment among less educated adult natives increased by nearly 1 million, with an additional 1.5 million choosing to leave the labor force (Camarota, 2006). In addition, while the number of discouraged workers has declined over the past year, this decline has been limited to those aged above 25 years old (OECD, 2005), suggesting that most of the discouraged workers had been among the younger, less educated cohorts.

For an overview of the factors affecting elderly participation, see Burtless (1999) and Burtless and Quinn (2001).

Gruber and Madrian (1995) suggest that the introduction of a universal health care system in the United States would increase the rate of early retirement.

Based on the Department of Labor’s Mass Layoff Survey that covers establishments with at least 50 employees.

Contribution of demographics to the change in aggregate participation rate, 2000-2005 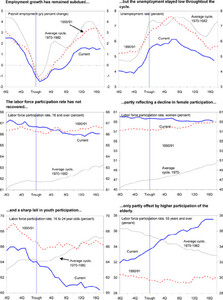 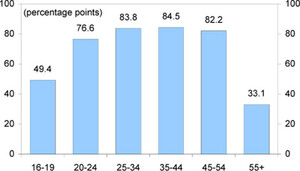 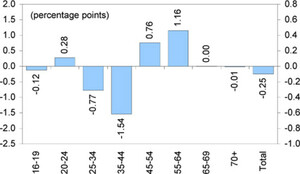 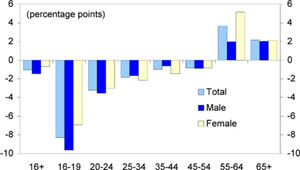 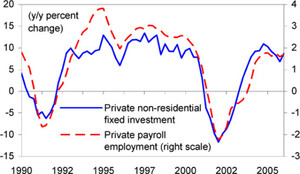