1. Japan’s key fiscal challenge is to put public finances on a more sustainable footing. Large government budget deficits have boosted Japan’s net public debt to over 85 percent of GDP, one of the highest in the OECD. In the years ahead, rising health and elderly care costs will add strain to public resources. The Cabinet Office estimates that in the absence of further policy adjustments, social security expenditure will reach 22 percent of GDP by 2025, up from about 18 percent of GDP in 2005. 12 As a result, the government’s net debt could continue to rise. Rising debt could increase interest rates, lower investment, and ultimately hamper growth in the context of population aging.

2. The authorities are committed to addressing these risks by achieving a primary balance of the general government (excluding social security) by 2011. Although the government has not yet announced a detailed plan on how to attain this target, there is a growing consensus that consolidation would contain a mixture of both expenditure and revenue measures. The debate focuses on how to design a successful adjustment, while minimizing the output costs. A menu of options to underpin consolidation will be unveiled in the forthcoming releases of the “Roadmap for Income-Expenditure Reform” and the Basic Policies for FY2006.

3. This chapter investigates the macroeconomic implications of alternative fiscal strategies that differ in the composition, pace, and timing of the measures. It uses a two-country version of the IMF’s Global Fiscal Model (GFM), calibrated to the Japanese economy. Specifically, the chapter poses the following questions:

4. The main findings are:

5. The framework used is a two-country version of the IMF’s Global Fiscal Model (GFM) calibrated to the Japanese economy. GFM is a macroeconomic model developed specifically to examine a range of fiscal issues. 14 In GFM, fiscal policy affects both aggregate demand and aggregate supply. Aggregate demand responses result from the absence of debt-neutrality and consumers’ impatience—i.e. their preference for immediate rather than deferred consumption. Aggregate supply responses arise inter alia from the distortionary effects of payroll and corporate income taxes.

6. In GFM, fiscal policy matters because of the following departures from Ricardian equivalence:

7. The model has been parameterized to reflect key macroeconomic features of Japan (Tables II.1 and II.2). In particular, the ratios of consumption, investment, government spending, wage income, and income from capital relative to GDP are set to their current values. Similarly, key fiscal variables—revenue to GDP ratios from taxation of corporate, labor, and personal income and consumption tax, as well as government debt and current government spending—have been calibrated to Japan’s fiscal structure. 15

Behavioral Assumptions and Key Parameters in the Initial Steady State

Behavioral Assumptions and Key Parameters in the Initial Steady State

8. Other main aspects of the model are:

10. A primary balance could be attained by 2011 through expenditure or tax measures—or a combination of both. 18 The needed adjustment amounts to about ½ percent of GDP on average per year for five years. As shown in the table below, if the adjustment relies only on one type of measure, substantial changes will be necessary. For example, to reach a primary balance by 2011, as the authorities intend, would require: a doubling of the consumption tax rate to 10 percent; a 5 percentage-point increase in the corporate income tax; or about a 25 percentage-point cut in spending on goods and services of the central government’s general account (as defined in the table). On the whole, given the size of the necessary adjustment, consolidation is likely to be accomplished through a combination of expenditure and revenue measures.

Includes social security and government employee pension and others.

Includes social security and government employee pension and others.

11. Simulations suggest that in the short run there may be modest differences in the output cost of the various options.

12. Among the revenue measures, a consumption tax increase has the least negative effect on output.

13. Different consolidation strategies have different implications for the debt ratio in the long run. The consolidation scenario with transfers yields the lowest debt ratio (around 125 percent), mostly because of the smaller negative impact on output. Lowering government spending on goods and services, on the other hand, would generate the highest debt ratio (around 135 percent), as the real interest rate tends to be higher and GDP lower, mainly because of the bias in public consumption toward non-traded goods.

Size, Pace and Timing of Adjustment

15. A more ambitious consolidation than envisaged by the authorities would stabilize the debt ratio and secure longer-term gains. Staff estimates indicate that stabilizing the general government debt (excluding social security) would require achievement of a primary surplus of 1¼ percent of GDP or an average annual adjustment of at least ¾ percent of GDP. This adjustment entails somewhat larger output costs in the short run, but would raise longer-term growth: labor supply and consumption are stimulated in the longer term, relative to the baseline, because a lower debt ratio lowers the anticipated tax burden, and thus raises after-tax real wages. The positive effect on output is stronger the larger the effect of interest rate on consumption, which in turn depends on how much consumers discount future consumption.

17. Model simulations suggest that the timing of the adjustment also matters. Two alternative scenarios to stabilize the debt ratio have been simulated: a gradual and a stop-and-go scenario. The gradual scenario envisages a sustained adjustment of ½ percent of GDP a year over nine years (to yield the primary surplus excluding social security necessary to stabilize the debt ratio). The stop-and-go scenario envisages a pause in the adjustment for three years (see table above). The chart above compares the different impact on growth of these two scenarios with that of a more ambitious consolidation (“Staff Plan”, see ¶ 15). The simulations suggest that a gradual adjustment may limit the short-term negative effects of consolidation on growth but also reduces the long-term benefits. This stems from the fact that the delayed adjustment yields higher debt, which in turn would crowd out private domestic and foreign investment through higher interest rates. 23

18. A tax reform that shifts the burden from direct to indirect taxation could support output growth. The fall in corporate taxes spurs investment, and ultimately output growth. On the external side, the spillovers to the rest of the world would be positive, albeit modest. Moreover, a revenue-neutral shift to taxation of consumption also could be justified on intergenerational equity grounds since it would foster burden-sharing in the context of an aging population.

19. The results outlined above are sensitive to changes in the parameterization of the elasticity of labor supply and some aspects of consumption behavior. In particular,

20. The simulations presented in this chapter suggest that the design of fiscal adjustment matters for growth. Net present value calculations indicate that the cumulative impact of consolidation on growth may be positive for strategies based on reducing transfers, increasing the consumption tax, or a combination of expenditure cuts and tax increases. The results also indicate that the cumulative impact may be negative for strategies based on raising corporate taxes or personal income taxes.

The 2004 reform of the pension system will help contain longer-term pension outlays by streamlining the benefits and gradually increasing the contributions of employees and employers. Most of the demand on the budget will be related to healthcare.

The GFM imposes a fiscal reaction function that re-establishes debt sustainability in the very long run. The simulations in this paper focus on benefits over a shorter policy horizon (about 25 years).

See Botman and others, 2006, for details on the micro-foundations of the model.

Other structural parameters have been calibrated using evidence from Laxton and Pesenti (2003) and Batini and others (2005).

The model has been applied by IMF staff for background work for recent Article IV consultations with Canada, the United Kingdom, and the United States.

A primary balance for the general government (excluding social security) is the authorities’ goal, but it will not stabilize the debt ratio.

If consumption were to depend only on current income, then a consumption tax would be equivalent to a payroll tax and an increase will lead to a more pronounced withdrawal of labor effort and a larger supply side impact. The output cost would still be smaller than with a corporate income tax hike.

This result is in line with evidence from Baylor (2005).

The model probably understates the sensitivity of investment to taxation as capital is assumed to be not internationally mobile.

This trade-off increases with the shortening of consumers’ planning horizon as future consolidation measures are less discounted. It should also be noted that GFM does not incorporate costs of price adjustment (menu costs), which may provide an additional reason against a gradual increase particularly in the consumption tax rate.

The sensitivity of consumers to changes in interest rates depends on their degree of impatience, captured through the parameterization of the intertemporal elasticity of substitution. With a lower degree of impatience (higher intertemporal elasticity of substitution), consumption would be more sensitive to changes in interest rates, which implies that smaller changes to interest rates will be necessary to re-equilibrate world savings and investment flows.

(Deviation from control; in percentage point)

(Deviation from control; in percentage point)

(as a percent of GDP)

(Deviation from adjustment of 1/2 percent of GDP per year, in percentage point)

The Impact of the Timing of Consolidation on Real GDP Growth

(Deviation from control, in percentage point)

(in deviation from control, percentage point) 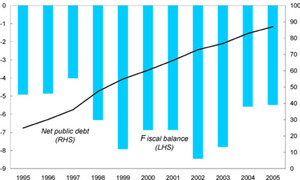 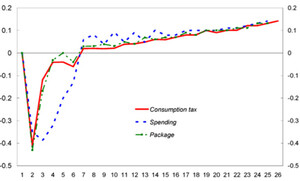 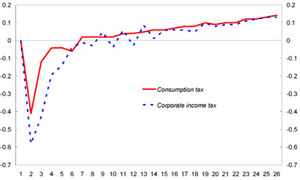 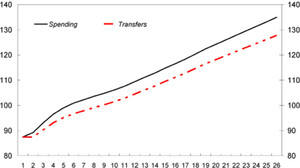 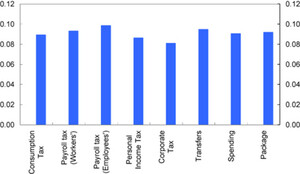 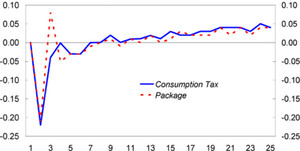 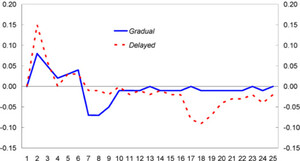 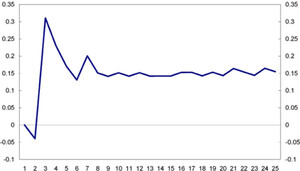 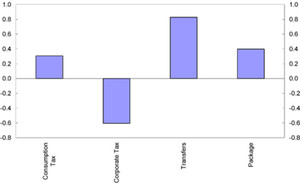