1. Japan’s economic re-awakening over the past four years raises the question of whether the country’s potential output growth rate may now be higher. Structural adjustments to the imbalances of the so-called “Bubble” years have strengthened fundamentals. At the same time, an aging population complicates the challenge of ensuring strong self-sustaining growth. With Japan’s birth rate well below the population’s replacement rate, the working-age population in fact has been contracting since 2000, and the elderly dependency ratio (the share in the working age population of people at least 65 years old) is now the highest among industrial countries. With a declining labor force, per capita income growth will depend critically on higher productivity. 2

3. The empirical results indicate that potential output growth in Japan is likely to have picked up in recent years and is likely to be in the range of 1¾ to 2 percent in the years immediately ahead. Higher total factor productivity (TFP) growth has helped offset a declining contribution of capital inputs and a negative contribution of labor inputs. The results also suggest that product market competition, openness, and research and development (R&D) investment are key determinants of productivity growth. At the same time, structural unemployment, which remains historically high at around 4 percent, is directly related to the generosity of the unemployment insurance system (the level of out-of-work benefits relative to in-work wages and salaries) and the aging of the labor force.

B. What is Potential Output Growth?

5. There is a plethora of studies on Japan’s potential output growth. Depending on the methodology used, results differ markedly both with respect to the estimated potential growth rate and the contributions of key structural factors.3 Estimates of potential output growth recently prepared by official agencies range between 1½ to 2 percent. This diversity in estimates stems mainly from the fact that potential output is an unobserved variable and can only be inferred indirectly. 4

6. The methodology used here combines filtering techniques to estimate trends along with estimation of a structural model encompassing accounting and structural relationships from economic theory. Potential output is considered as the level of output that would emerge from the production function, given the current levels of fixed inputs and levels of variable inputs consistent with stable inflation (Annex I).

8. Regarding the estimates of potential output and its components, the key results are as follows (Figures I.1–I.3).

C. What are the Determinants of Productivity?

9. Sectoral data suggests that the recent pick up in total factor productivity growth reflects improvements across most sectors of the Japanese economy, particularly manufacturing. Part of the improvements in sectoral TFP are likely to reflect Japan’s cyclical recovery since the 5-year averages used in this analysis have not been detrended. Nevertheless, some key trends emerged:

10. In general, improvements in TFP growth have translated into labor productivity gains in most industries, despite less capital deepening. Capital deepening (defined as growth in capital input per hours worked) slowed, reflecting the well-known structural problems in the banking and corporate sectors.

D. What is the Likely Impact on Potential Output of Reforms Undertaken in Recent Years?

13. How such reforms above might spur potential output growth can be illustrated by contrasting two scenarios over 2006–2011.

14. The estimated magnitude of the impact of structural reforms on longer-term growth is very much in line with other recent estimates. Indeed one official report (METI, 2006) considers that greater competition, efficiency gains in public services, and further IT diffusion and R&D could boost longer-term growth to 2¼ percent (from its current level of 1½ to 2 percent). This order of magnitude of the potential gains from reforms is however at the lower bound of dynamic medium-term payoffs estimated in various studies, that range from 0.3 to 2.4 percentage points.10 Nevertheless, even under conservative assumptions on the size of the payoffs, it is clear that further structural reforms could go a long way to help Japan respond to the challenges posed by its aging population and support strong growth and higher living standards in the years ahead.

A recent government-sponsored report “Japan’s 21st Century Vision” sets out the importance of raising productivity and reaping the benefits of globalization to avoid deteriorating living standards.

The system of equations (1)-(18) in Annex II has been estimated with the constrained maximum likelihood procedure applying the methodology described in Laxton and N’Diaye (2002) and Benes and N’Diaye (2004) over the period 1964:Q1-2005:Q4.

Innovation is often perceived as the main channel through which competition and openness affect on productivity growth.

The data were provided by the Bank of Japan. The official capital stock series assumes that additional investment is fully productive for a fixed number of years and is then eliminated. See Hara and others (2006) for greater details.

Japan has the lowest level of import penetration amongst OECD countries notwithstanding growing trade linkage with China and other Asian economies. See OECD (2006).

Japan: Potential Output and its Components-Baseline 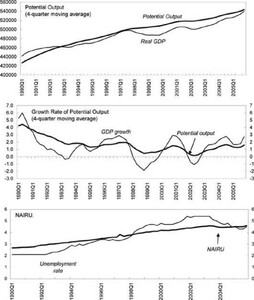 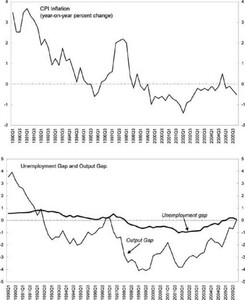 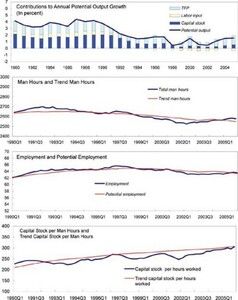 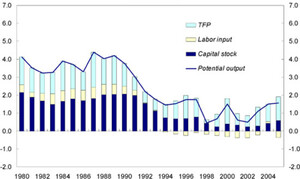 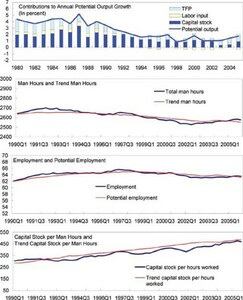 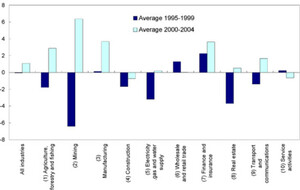 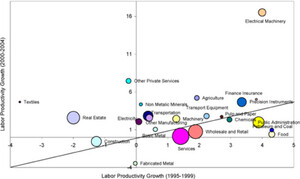 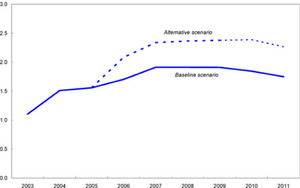 Powered by PubFactory
Close
Table I.3.