This Selected Issues paper analyzes whether cyclical factors, including the large real exchange rate appreciation in recent years in New Zealand, can account for the rapidity of the recent rise in import penetration, or whether more lasting structural changes, such as the effects of globalization, may have played a role. The paper also looks at New Zealand’s vulnerabilities from two angles. It evaluates the external position of the country, and then assesses the health and soundness of various sectors of the economy by looking at their balance sheets and the key vulnerability indicators.

This Selected Issues paper analyzes whether cyclical factors, including the large real exchange rate appreciation in recent years in New Zealand, can account for the rapidity of the recent rise in import penetration, or whether more lasting structural changes, such as the effects of globalization, may have played a role. The paper also looks at New Zealand’s vulnerabilities from two angles. It evaluates the external position of the country, and then assesses the health and soundness of various sectors of the economy by looking at their balance sheets and the key vulnerability indicators.

II. Implications of the Current Account for Macro Stability in New Zealand8

1. The current account deficit poses no immediate threat to macro stability in New Zealand, but risks have increased. In comparison to all advanced economies over the past 25 years, New Zealand’s current account deficit is unusually high (Chart). The empirical literature on sharp current account reversals suggests that the economic situation in New Zealand displays many of the factors that contributed to sharp reversals in other countries. Macroeconomic developments also have some similarities with those in Finland and Sweden before they experienced severe recessions in the early 1990s. Moreover, imbalances in New Zealand at present are larger now than they were in 1997, the last time there was a significant correction in the current account balance. Nonetheless, the international experience points to a robust financial system as being a key element in achieving a smooth and orderly adjustment of the current account, and New Zealand’s healthy banking sector should ensure a soft landing.

A. What Does the Literature Tell Us About New Zealand’s Current Account Deficit?

2. Economic theory is unclear on whether current account deficits are a cause for concern. Current account deficits caused by persistent fiscal deficits (“twin deficits”) are usually considered undesirable, because they reflect an unsustainable fiscal policy. It is less obvious that private sector-led current account deficits are undesirable, because these deficits reflect decisions of private agents. Problems could nonetheless arise if the decisions of private agents lead to deviations from fundamentals (if, for example, there is an asset price bubble), or if mounting external debt leaves the country excessively exposed to external shocks (e.g., to export demand or the terms and availability of financing).

Only variables which appear in more than one study or which have a non-ambiguous impact are included in the table.

Only variables which appear in more than one study or which have a non-ambiguous impact are included in the table.

6. Current account reversals tend to have a negative impact on GDP growth, and some factors exacerbate this impact. Larger current account deficits and a more appreciated exchange rate increase the cost of reversal, while higher trade openness reduces it (Table II.2). Larger current account deficits might reflect that a larger adjustment is necessary (though Debelle and Galati (2005) also find that larger current account deficits do not increase the likelihood of a reversal). A more appreciated real effective exchange rate might signal greater misalignment with economic fundamentals. More open economies can rely more on trade rather than a domestic demand contraction to adjust. Surprisingly, neither a healthy fiscal position nor a more flexible exchange rate seem to reduce the cost of a reversal. More open capital accounts, which leave the country more subject to rapid capital outflows; higher GDP growth before the adjustment, which could reflect overheating; and higher international interest rates, which increase debt service, do not seem to increase the cost of reversal either.

7. Many of the factors identified as increasing the cost of a reversal are at play in New Zealand. New Zealand current account deficit is high; the real effective exchange rate is significantly above historical average; and the economy is relatively closed.9 Nonetheless, one would expect New Zealand’s healthy fiscal position and flexible exchange rate to help cushion the impact of a potential reversal on GDP growth, despite the fact that the empirical literature does not offer strong evidence supporting this intuition.

B. Do the Recessions in Finland and Sweden in the Early 1990s Carry Lessons for New Zealand?

8. Macroeconomic fundamentals in New Zealand in 2005 were similar to those in Finland and Sweden before their recessions in the early 1990s (Figure II.1). Current account deficits were widening in all three countries. Housing booms played a key role in these deficits, as the booms encouraged increasing borrowing. Household saving rates fell, and household debt rose sharply, increasing their debt service burden. Buoyant domestic demand contributed to strong GDP growth and the unemployment rate fell below 2 percent in Sweden and below 4 percent in Finland. Strong growth helped generate positive fiscal balances, and government debt fell steadily. Inflation also picked up as resources in the economy became stretched. The real exchange rate appreciated, as a result of strong capital inflows and rising inflation, but a major difference was that Finland’s and Sweden’s nominal exchange rates were pegged.

9. Finland and Sweden experienced severe recessions during which their current account balances swung from deficit to surplus.10 House price and GDP growth started declining in Finland in 1990 and in Sweden in 1991. Sweden started raising interest rates in 1990 partly as a result of insufficiently tight fiscal policy. German unification and the subsequent increase in German interest rates forced Finland and Sweden to further raise interest rates in 1991–92 to defend their currency, until sustained speculative attacks forced devaluations of both currencies. Consumption and investment dropped as economic confidence plummeted (investment fell 15 and 20 percent annually on average during 1991–93 in Sweden and Finland, respectively). Imports fell as a result, and exports boomed, helped notably by the countries negotiating EU membership at the time. The current account balances improved, but the economies remained in recession for three years (output dropped by an overall 14 percent in Finland).

10. Financial sector health is probably key in avoiding a severe economic recession. Both Finland and Sweden had liberalized their financial sector in the years preceding the crisis. While household credit grew rapidly as a result, lending to corporations increased even faster in Sweden. It was therefore not clear that the resulting current account deficit was unhealthy, as it also reflected high levels of business investment. Yet, it turned out that banks had extended loans too aggressively as a result of inadequate financial regulation and over-aggressive competition to gain market shares. Finland and Sweden both experienced a banking crisis in the early 1990s. The turmoil in the banking sector probably contributed to a sharp fall in confidence and in lending, adding to the fall in economic activity. In contrast, the recent FSAP stressed that New Zealand’s financial system is robust. The country seems therefore better prepared to achieve a smooth current account adjustment than Finland and Sweden in the early 1990s.

11. The sharp rebalancing that occurred in Finland and Sweden mostly reflected domestic factors, although external shocks helped trigger the adjustment. External shocks hit Sweden and Finland in the early 1990s, but their overall impact on GDP growth was probably limited. European interest rates increased in the early 1990s, but Finland and Sweden eventually loosened monetary policy. Finnish interest rates, which were 7 percent higher than Germany’s in 1992, had fallen near German levels by 1993. Swedish interest rates fell to their lowest in over a decade in 1993. Consequently, interest payments by households fell quickly. Through significant trade links, the collapse of the Soviet Union also hit Finland. The overall impact on the economy was small, however. Exports to the Soviet Union, which represented 15 percent of total, fell 70 percent in 1991. But Finnish total exports grew 6.7 percent annually on average in 1991–93, so that export levels were back to pre-Soviet collapse levels within less than two years and kept growing fast afterwards. Honkapohja and Koskela (1999) estimate that the overall cost for the economy was at most 2 percent of GDP, even allowing for large multipliers.

12. A significant economic slowdown can have large fiscal and employment costs. The recessions in Finland and Sweden had a large and persistent impact on fiscal positions and unemployment. While positive before the reversal, budget balances turned largely negative afterwards, as revenue fell and expenditure (notably social spending) increased (Figure II.1) Government debt increased by about 40 percent of GDP in both countries.11 Unemployment rates, which had been remarkably low, increased to nearly 10 percent in Sweden and over 15 percent in Finland and remained at such levels for several years. The lessons from the Finish and Swedish cases are that positive fiscal balances can prove fragile when a severe recession settles in; and that ex-ante well-functioning labor markets can prove persistently dysfunctional under great economic stress.

13. The economic settings in 1997 and 2005 have some similarities (Figure II.2). In both years, GDP growth was strong; house prices, household debt, and interest payments were rising; unemployment was low; and the government was running fiscal surpluses. The currency was also appreciating and the current account deficit widening. In 1997, the Asian crisis, combined with sharp monetary tightening, triggered a brief recession and a current account adjustment. The near-term probability of a similar strong external shock occurring is not clear. However, New Zealand’s imbalances in 2005 were larger than in 1997. Housing value and household debt have risen significantly compared to disposable income. Debt service and net foreign liabilities have also increased. Moreover, the current account deficit is now larger. All of these developments would tend to make the economy more vulnerable.

New Zealand ranks 19th out of 30 OECD countries for openness, and the relative lack of openness in the economy is even larger when adjusting for the size of the economy. New Zealand’s openness is about 60 percent against about 150 percent for European countries of similar size, such as Ireland or Belgium. This measure of trade openness may understate the openness of the New Zealand economy however, because the country’s exports tend to have high domestic value-added and low import content.

The analysis in this paragraph draws on Englund (1999) and Honkapohja and Koskela (1999).

Englund (1999) reports that the direct fiscal cost of the banking crisis in Sweden was about 2 percent of GDP. Most of the increase in public debt therefore corresponds to the cost of recession. 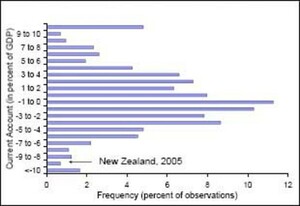 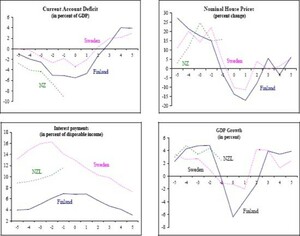 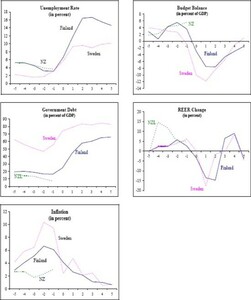 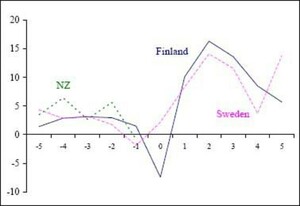 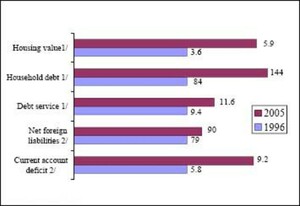 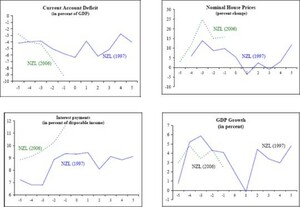 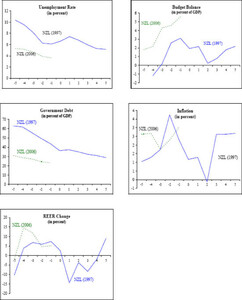