This Selected Issues paper on the United Kingdom reviews the IMF's Global Economy Model, which incorporates energy to examine the impact of rising energy prices on the United Kingdom. The model incorporates energy as a final consumption good as well as a primary input in the production process. With energy entering the production process, increases in energy costs affect overall aggregate supply capacity as firms reduce output and factor-utilization rates given the real increase in their cost structures.

This Selected Issues paper on the United Kingdom reviews the IMF's Global Economy Model, which incorporates energy to examine the impact of rising energy prices on the United Kingdom. The model incorporates energy as a final consumption good as well as a primary input in the production process. With energy entering the production process, increases in energy costs affect overall aggregate supply capacity as firms reduce output and factor-utilization rates given the real increase in their cost structures.

III. Options for Fiscal Consolidation in the United Kingdom 25

This paper examines the impact on GDP of differences in the timing and composition of fiscal consolidation, using the IMF’s Global Fiscal Model calibrated to match the UK economy. Early consolidation dampens aggregate demand in the short term, but increases output in the long term as the size of adjustment is reduced by lower interest payments. Early consolidation becomes even more favorable if global interest rates rise. Reducing transfers or government spending is better than tax increases because of the adverse effects of higher taxes on labor supply and capital accumulation.

1. Fiscal rules introduced in 1997—a Golden rule and a Sustainable Investment rule—are a central part of the U.K. fiscal policy framework to ensure sound public finances over the medium-term. The Golden rule requires that the public sector’s current balance be non-negative on average over the economic cycle and the Sustainable Investment rule requires net public sector debt to be kept at a stable and prudent level (which the Treasury regards as below 40 percent of GDP). These fiscal rules, aimed at assuring fiscal solvency and avoiding procyclical fiscal stimulus while providing scope for automatic stabilizers to operate fully, have contributed to enhancing the credibility of the fiscal framework by anchoring expectations and improving transparency.

2. However, the fiscal deficit has remained large during the recent period of strong economic growth and now poses an increasing challenge to the fiscal rules. The past five years have seen a sizable deterioration in the fiscal position owing to a rise in current spending that outstripped the improvement in revenue. With the overall deficit stuck at about 3 percent of GDP in recent years, net public debt has edged up to about 35 percent of GDP in FY2004/05 from a low of 30 percent of GDP in FY2001/02.26 While the level of public debt remains relatively low, going forward, a reduction in the overall deficit will be needed to continue to meet the fiscal rules. Against this backdrop, the paper aims at exploring the macroeconomic consequences of the timing and composition of fiscal consolidation.

3. This paper investigates the macroeconomic effects of the various options for fiscal consolidation. For this purpose, the paper uses a two-country version of the IMF’s Global Fiscal Model (GFM), calibrated to the U.K. economy. GFM is a theory-based annual simulation model developed specifically to examine a range of fiscal issues (see Botman and others 2006 for details on GFM).27 The paper poses the following questions:

B. The Model and Calibration

5. The model involves a stylized representation of the U.K. tax and expenditure system. The analysis incorporates four taxes: a labor income tax levied on wage compensation paid by workers or employers (payroll tax); a corporate income tax levied on accounting profits of firms; and a personal income tax levied on labor income, accounting profits, government transfers, and interest income (on government bonds and net foreign assets). Since liquidity constrained consumers have no wealth and do not save, they are not directly affected by corporate income taxes. It is assumed that for all three taxes, there is a single (although different) marginal rate, which coincides with the average tax rate. Revenues raised by taxation are spent on lump-sum transfers to consumers, government consumption of both traded and nontraded goods, and servicing government debt. At present, GFM does not incorporate a sales tax or VAT.

6. Other main aspects of the model can be briefly summarized as follows:

7. The model has been parameterized to reflect key macroeconomic features of the United Kingdom. In particular, key parameters—the ratios of consumption, investment, government spending, wage income, and income from capital relative to GDP—are calibrated to the U.K. economy. Similarly, fiscal variables—taxes rates on capital, labor, and personal income, and government debt—have been calibrated to correspond to the U.K. fiscal structure. The size of the U.K. economy is assumed to be around 5 percent of the world economy, which implies U.K. policies have only a minimal impact on the global rate of interest.

9. The impact of fiscal policy on real activity combines responses from aggregate supply and demand. Aggregate supply changes are triggered through the “distortion channel.” Fiscal policy influences include the impact of wage taxes on the incentive to work and the effect of corporate income tax rates on the incentive to invest in productive capital. Aggregate demand changes largely depend on fiscal policy’s effects on wealth and interest rates. The strength of the wealth channel is influenced by the level of consumer “impatience.”

10. The baseline features delayed consolidation. In the baseline, government debt increases to about 43 percent of GDP by FY2009/10. This is consistent with a scenario in which no fiscal consolidation is forthcoming in the near future. The financing gap—the difference between revenue and expenditure—is assumed to close after FY2009/10 by gradually increasing labor income taxes on workers. The consolidation generates the primary surpluses required to stabilize the debt ratio at 45 percent of GDP.

11. Delaying fiscal consolidation implies modest short-term output gains (Figure 1). The initial financing gap stemming from higher government transfers stimulates aggregate demand in the short term, especially by liquidity-constrained consumers. The initial increase in domestic demand is supported by real exchange rate appreciation—following higher interest rates in the United Kingdom than the rest of the world. As government debt rises, however, labor income taxes on workers need to be increased—by about 2 percentage points—to stabilize the government debt-to-GDP ratio taking into account the need to finance higher interest expenses. The long-run increase in the real interest rate is muted by the fact that the UNITED KINGDOM is a relatively small open economy. Labor effort, investment, and consumption all decline in the medium-term, implying a permanent output loss of about 0.3–0.4 percent.

13. Weighing the short and long-term macroeconomic effects through a net present value calculation confirms the significant benefits of early consolidation. The gains of early consolidation compared to delayed adjustment through higher labor income taxes is between 1½ and 7½ percent of GDP depending on the type of instrument. When adjustment is delayed, the benefits of lowering transfers or government spending compared to higher personal or corporate income taxes are even more pronounced than for an early consolidation. This is because the higher level of government debt and associated interest payment creating further distortions in case taxes are increased.

14. Sensitivity analysis indicates that the results are broadly robust to changes in behavioral parameters (Appendix).31

15. The choice between early and delayed consolidation in the United Kingdom is also likely to be affected by changes in global interest rates. In particular, changes in global savings and investment have implications for the real interest rate in the United Kingdom and changes in consumption in the rest of the world affect the demand for imports from the U.K. Furthermore, foreign fiscal policies affect the real exchange rate implying potential wealth effects on U.K. consumers. In order to illustrate these channels of interaction we consider a gradual, but permanent increase in government debt by ten percentage points in the rest of the world because of a temporary reduction in labor income taxes.

16. A reduction in global savings would have a significant impact on the U.K. economy by pushing up real interest rates (Figure 3). A less benign global financing environment, simulated here as an increase in government debt in the rest of the world, increases real interest rates by about 70 basis points in the long run. This results in crowding out of investment in the United Kingdom as well as higher (labor income) taxes because of higher financing costs of government debt. These two channels are magnified by the negative wealth effect of real exchange rate depreciation in the short-term and—despite higher exports of the United Kingdom to the rest of the world—imply a permanent decline in output.

18. The conclusions of this analysis can be summarized as follows:

19. The 2005 Pre-Budget Report (PBR) contained measures aiming at a modest reduction in the overall deficit over the medium-term broadly consistent with the findings above. On staff projections, with the measures—an increase in the tax rate on oil company profits and current spending restraint—the overall deficit would come down to about 2 percent of GDP by FY2009/10, stabilizing net public debt to about 40 percent of GDP. Although specifics have not yet been provided, the envisaged fiscal consolidation through spending restraint is a good example of an early and gradual consolidation discussed in this paper, which would prevent the steady increase in government debt.

The fiscal year runs from April to March.

For applications of the model in the context of fiscal reform in respectively Canada and the United States see Bayoumi and Botman (2005), Bayoumi, Botman and Kumar (2005), Kumhof, Laxton, and Muir (2005), and Botman and Laxton (2004).

See Laxton and Pesenti (2003) for a more detailed discussion of evidence on parameter values.

In case trade in financial assets is imperfect between the U.K. and the rest of the world, the benefits of an early rather than a delayed consolidation would be larger as higher government debt in the U.K. would imply a larger increase in the real interest rate.

Total after-tax wage income accruing to workers changes the same whether payroll taxes levied on workers or on employers are increased. However, in the former case hours worked declines through a drop in labor supply—increasing the real wage. While in the latter case, hours worked declines (although by less) through a reduction in labor demand causing the real wage to fall as well.

The Appendix also analyses the impact of fiscal adjustment when it is combined with tax reform.

Effect on Real GDP of Alternative Types and Timing of Consolidation

(Deviation from baseline in percent of GDP)

Impact on GDP of Tax Increase

(deviation from baseline, in percent)

Impact on GDP of Spending Restraint vs. Tax Increase

(deviation from baseline, in percent)

Effects on the U.K. of a Reduction in Global Saving

The Effects of Early Consolidation in the U.K. When Global Savings Decline

The Effects of Combining Early Fiscal Consolidation and Tax Reform 1/ 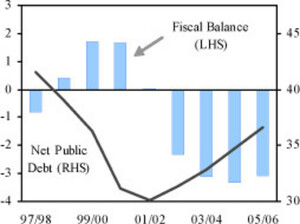 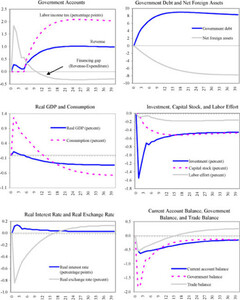 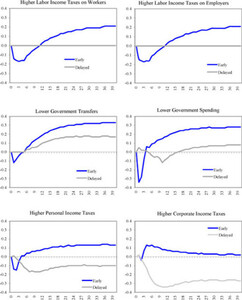 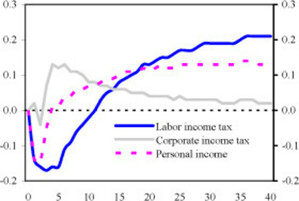 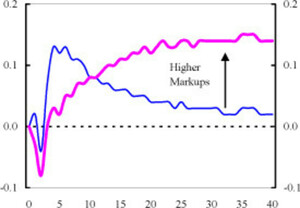 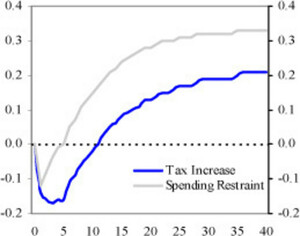 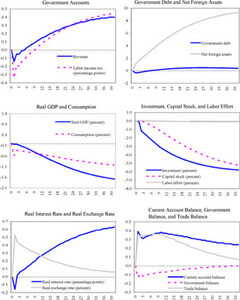 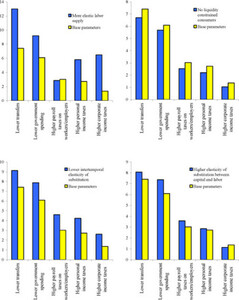 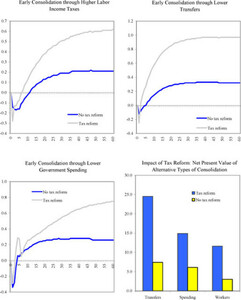