This Selected Issues paper for India reports that rapid growth is presenting new challenges to macroeconomic policy, although ensuring the sustainability of this growth requires broad-based fiscal and structural reforms. Higher world oil prices present risks in both the near and medium term. In the short-term, higher oil prices combined with robust domestic demand threaten to push inflation higher. Over the longer-term, permanently higher oil prices can depress growth and widen fiscal imbalances, in particular if the economy is not allowed to adjust to new price levels.

This Selected Issues paper for India reports that rapid growth is presenting new challenges to macroeconomic policy, although ensuring the sustainability of this growth requires broad-based fiscal and structural reforms. Higher world oil prices present risks in both the near and medium term. In the short-term, higher oil prices combined with robust domestic demand threaten to push inflation higher. Over the longer-term, permanently higher oil prices can depress growth and widen fiscal imbalances, in particular if the economy is not allowed to adjust to new price levels.

VI. Inflation and the Services Sector in India1

1. Little is known about the evolution of prices in the services sector, which presently accounts for more than half of India's aggregate output. The recent debate over the reliability of the wholesale price index (WPI) as an indicator of inflation focuses on its lack of representation of the services sector. Sectoral price movements are of clear interest in the framing of monetary policy, where the absence of a service' price index particularly frustrates assessment of the second round effects of various shocks.

2. This paper examines inflation in the services sector and the related dual inflation rates in the traded and nontraded sectors. A faster rate of growth of services prices has been a key source of divergence in traded and nontraded goods inflation in recent years. In this context, the paper explores the role of Balassa-Samuelson effects as well as price and trade liberalization in the adjustment of relative prices. The paper also discusses the consequences of a possible understatement of inflation and the implications of dual inflation rates for economic policy. It is important to develop a price index that adequately reflects services, and the government's forthcoming revision of the WPI to broaden its base and the proposed construction of a services' price index are steps in the right direction.2

B. Inflation in the Services Sector

3. In the absence of a service' price index, implicit sectoral price series can be derived from nominal and real output data.3 The implicit sectoral inflation rates (Figure VI.1) show the inflation differential between services and non-services to be consistently positive since the 1980s, and is larger if we compare services with manufacturing only. As a result, price indices that do not capture services—such as the WPI—are likely to understate inflation. These differentials can be seen as rough approximations to tradables/nontradables price differentials, an issue addressed in further detail below. In recent years, service' inflation has increased its contribution to the rise in overall inflation (as measured by the GDP deflator) from a 47 percent in the first half of the 1990s to 60 percent from 1998–99 onwards (Figure VI.2).

4. The lack of high frequency, comprehensive information on sectoral prices hampers assessment of short-term inflation developments. Annual sectoral inflation differentials ranged from almost 50 basis points in 1997–98 to 243 basis points in 1999–2000. Uncertainty about possibly differential speeds of price adjustment across sectors as well as feedback and transmission processes also arise, particularly in the context of assessment of second round effects of supply shocks. Given the priority accorded to inflation control as a policy objective, a comprehensive, high frequency inflation indicator is needed.

6. A secular increase in the relative price of nontradables—and therefore services—is a well-documented feature of economic development. Supply-side models interpret this increase as part of a catch-up process, i.e., cross-country convergence in productivity levels (Balassa, 1964; Samuelson, 1964). Faster technological progress and productivity growth in the tradable sector increases the relative price of nontradables. Sectoral productivity growth differentials thus translate directly into sectoral inflation differentials and are typically observed as countries open up and their tradable sector is exposed to international competition.

7. The sectoral inflation differentials noted in the previous section are maintained with a tradable-nontradable classification based on export/production ratios. Services are typically treated as nontradables, but given the high growth of exports of services in India, a natural proposition to examine is that some services should be treated as traded goods (Giovannini, de Gregorio and Wolff, 1994). On the other hand, a substantial portion of agriculture and some manufacturing sub-sectors could include nontraded goods. Using a 5 percent share of exports in the total value of output as the threshold for determining tradability, all of agriculture is nontradable, while all but three manufacturing sub-sectors and three out of eleven services are tradable (Table VI.1). Utilizing this distinction, sectoral inflation differentials averaged more than 1 percent in the 1990s (Figure VI.3). In addition, there appears to be a structural break in the 1990s when the nontradable-tradable inflation rate differential became large and positive.

The three services have been clubbed together as the export data (miscellaneous exports) indicates export values in aggregate for these services.

The three services have been clubbed together as the export data (miscellaneous exports) indicates export values in aggregate for these services.

8. The Indian economy exhibits certain attributes, i.e., a fast growing tradable sector with rapid productivity growth, that suggest the presence of Balassa-Samuelson effects. Since 1990, export growth has been robust and evenly dispersed across agriculture, manufacturing and services sectors (Figure VI.4). The share of total output exported doubled for each sector during1990–2000, while labor productivity in the tradable sector grew rapidly during the same time period.4

9. Productivity growth and inflation differentials between the tradable and nontradable sectors appear to be related. Consistent with the Balassa-Samuelson hypothesis, labor productivity growth in the tradable sector has generally exceeded that of nontradables consistently from 1982–83 onwards (Figure VI.5) while nontradables have consistently experienced higher inflation.5 Further support for a supply-side influence is provided by the rising share of tradables in total output, from 19 percent in the 1980s to 23 percent in the post-reform period (1992–2002).

10. Trade liberalization accelerated after 1991, likely contributing to relatively higher inflation in nontradables. The average effective tariff rate in India has been falling since 1991 (Table VI.2), impacting import prices. These, in turn, are reflected in falling input costs and consequently, and lower prices in the tradable goods sector, in particular manufacturing (Figure VI.6).

11. Relative price changes could also result from price liberalization. The post-1991 period is a period of fundamental, structural changes in price and production structures. A role could have been played by deregulation of administered prices and liberalization or the adjustment of regulated prices to cost-recovery levels during the transition (Backé, 2002b). The experience of European transition economies is that in the early phase of transition, substantial initial adjustments of relative prices (higher prices in the tradables' sector) were associated with rapid price and trade liberalization. This phase was followed by a moderation of inflation, a relatively faster increase in nontradables' prices and a trend appreciation of the real exchange rate (Backé, 2002b). Competition and labor market segmentation may also play a role in driving up the relative price of nontraded goods.6 Differences in wage bargaining patterns in the two sectors (Canzoneri et al, 1998), or government regulation or support of inefficient firms (de Gregorio, Giovannini and Krueger, 1994) could also give rise to different rates of inflation.

12. Deregulation of administered prices or their adjustment to cost-recovery levels has been a recent phenomenon in India. Competition and interest rate deregulation were initiated in the banking sector from 1990 onwards. The insurance sector was deregulated in 1998–99, although insurance premia are set by the insurance regulatory body. Price liberalization in telecommunications followed the insurance sector in 1999–2000. Figure VI.7 suggests that, in the aggregate, such deregulation has led to a decline in inflation for initially regulated industries.7 Price liberalization, then, has not contributed to the maintenance of an inflation differential between tradables and nontradables. As administered prices are still to be freed in many sectors, price liberalization will continue to impact relative prices for some time.

13. The existence of dual inflation rates has implications for the formulation, conduct and effectiveness of monetary policy. The findings of this paper underline the need for a services price index. The growing importance of services in the economy demands more information on the short-term evolution of its prices to inform monetary policy. There is also a need for services price data as a deflator in the national accounts.8 The need to understand the impact of the service economy on productivity growth, particularly given services roles as a driver of growth, further underscores the need for such data. The government's proposed revision of the current inflation indicator, the WPI, to include the services sector will help overcome the information gap.

The Working Group for the revision of the WPI is examining the compilation of a Producer Price Index (PPI) to enable a switchover from the WPI. The terms of reference also include the extension of the coverage of the WPI/PPI to the services sector.

The implicit price deflators represent farmgate prices of goods and services and are producer price inflation proxies. Approximately 54 percent of services GDP is estimated through the “direct method,” while the balance is estimated “indirectly.” Potential circularity in our analysis arising from the use of WPI or CPI as deflators is limited, as this approach is used for only 23 percent of service' GDP or 12 percent of aggregate GDP.

The exceptions, 1991–92 and 1997–1999, are years with shocks; 1991 is a crisis year with a 22 percent devaluation while faster nontradable productivity growth during 1997–99 is likely due to large public sector wage increases in 1998–99 (visible as the spike in nontradables inflation), which overstates services sector output, and a 9 percent exchange rate devaluation in 1998.

Railways, communications, banking and insurance, public administration and defense and agriculture are classified as sectors with regulated prices, while the rest of the services for which prices are market-determined are included in the nonregulated sector.

Presently, the WPI and CPI are used as deflators in some sub-sectors for compilation of annual and quarterly national accounts.

Contribution of Services' Inflation and Agri/Mning/Mfg.

Inflation to Overall Inflation (In percent) 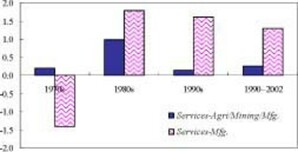 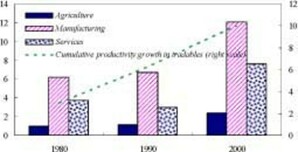 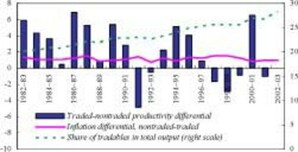 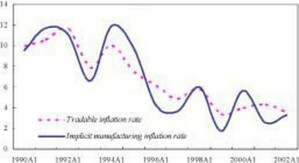