VI. Export Performance: The Impact of the Parallel Market and Governance Factors50

66. Improving export performance will be critical to a turn around in Zimbabwe’s economic situation. The growth rate of total exports declined dramatically in the early 2000s, following a large real appreciation of the currency and the introduction of the fast-track land reform program. Using quarterly export data from the Fund’s Direction of Trade Statistics (DOTS), this chapter (i) analyzes Zimbabwe’s export performance in recent years and (ii) identifies the factors that could improve export performance, from both a quantitative and qualitative perspective. A key finding of the paper is that policies that reduce (and eliminate) the parallel market premium and lower ethnic tensions would be key in promoting export growth.

67. The chapter is structured as follows. Section A presents the evolution of export performance in Zimbabwe. Section B analyses the determinants of export demand. Section C compares measures of competitiveness with neighboring countries and, in Section D, policy measures are suggested.

A. Export Performance in Zimbabwe

68. Export performance is key to the Zimbabwean economy. Trade is a substantial share of GDP and exports are the main source of foreign exchange for the economy. In particular, agricultural exports, which have declined dramatically in recent years, have traditionally been an important driver of growth in the Zimbabwean economy, given the sector’s extensive backward and forward linkages. Hence, fostering competitiveness is important for Zimbabwe’s long-term growth and external viability.

69. The growth rate of total exports was high in the second half of the 1990s, but then turned negative since the early 2000s. Zimbabwe’s export performance was well above the average of African countries in the 1990s due to its comparative advantage in agriculture which was dominated by large commercial farms, and manufacturing. However, following the increasing overvaluation of the currency, export performance dropped off significantly in 2001-2004, including relative to the average of developing countries and neighboring countries. With the official exchange rate fixed from October 2000—first at Z$55/US$ and later at Z$824/US$—until end-2003, the currency became increasingly overvalued, and the authorities responded with a series of ad hoc measures, including the creation of special regimes for tobacco and gold exporters. The introduction of a managed foreign exchange tender system early in 2004 and the gradual relaxation of the surrender requirements on exporters resulted in a de facto depreciation of the official Z$824/US$ rate to Z$5,213/US$ by end-2004. However, the currency became overvalued again since the demand for foreign exchange continued to pick up. As a consequence, the parallel market premium rose from 13 percent in January 2004 to 53 percent by end-2004.

70. The sharp swings in the real exchange rate since 2000 were met with a relatively muted export response, suggesting that other factors may be at play. In contrast to the mineral sector, manufacturing and especially agriculture have been much less responsive to movements in the REER. Other factors such as internal conflict, poor infrastructure, access to credit and poor governance, among others, could be having important effects that may limit the positive impact of a more competitive exchange rate. In particular, agricultural production and exports—the mainstay of the Zimbabwean economy—collapsed with the disruption caused by the violent implementation of the fast-track land reform, which saw the seizure of largely white-owned commercial farms.51 The manufacturing sector, primarily agro-processing, was also affected since a large amount of inputs come from the agricultural sector.

B. Analysis of the Determinants of Export Behavior

71. The export data used in this study is drawn from the DOTS database. The DOTS present current figures on the value of merchandise exports disaggregated according to Zimbabwe’s most important trading partners. This analysis uses exports to Zimbabwe’s ten major trading partners: United States, Germany, South Africa, United Kingdom, Japan, France, Italy, Netherlands, Canada and Switzerland for the period 1984:Q1-2004:Q4.

72. The empirical work is based on the imperfect substitutes model proposed by Goldstein and Kahn (1985). The major assumption of the model is that neither imports nor exports are perfect substitutes for domestic goods. Exports are imperfect substitutes in world markets for other countries’ domestically produced goods, or the third countries’ exports. According to conventional demand theory, consumers maximize utility subject to a budget constraint. In this respect, export demand is specified as a function of the real exchange rate and the real incomes of the rest of the world. Thus, the export demand uation can be expressed as:

where i denotes the ten countries that are the most important trade partners of Zimbabwe and t denotes time. Descriptions of the variables are listed below:

Qi,t: Real exports of Zimbabwe to country i. (IMF, DOTS)

: Real exchange rate of country i. (IMF, IFS and INS)

The formula of the real official exchange rate is as follows:

Pi: Consumer price of country i;

Pd: Price of domestic goods (as a proxy for wages).

73. Given the economic environment in Zimbabwe, the model is extended to include a dual exchange rate regime (with official and parallel markets) as well as nonprice factors. Exports to the official market (which is measured in the DOTS) are modelled as a function of the real exchange rates in both the official market and parallel market.52 Moreover, as noted above, Zimbabwe’s export performance likely reflects many factors other than the real exchange rate, such as governance, cost of doing business, quality of infrastructure, and lack of property rights. Consequently, we expand the equation to include qualitative measures of such factors. With the inclusion of these variables explaining export supply, the model becomes a reduced form representation of export behaviour.

The formulae of the real official exchange rates are as follows:

The model estimations are based on quarterly data between the years 1985-2004. The export demand equation is estimated using a panel data model with random effects. Overall, the signs obtained for the coefficients are consistent with economic theory and are robust to different specifications.53

74. According to the estimation results (reported above), a real exchange rate devaluation would be the most important factor in boosting exports. As the variables are estimated in log form, the coefficients represent elasticities of real export demand:

75. Ethnic tension is identified as an important determinant of export performance. Different indices measuring political and economic risk components were included in the equation. Some of the indices were perfectly correlated or had coefficient signs that were not robust to the specification. Therefore, a generic to specific approach was followed and the ethnic tension index was the only index robust to the specification. According to the rating system of the International Country Risk Guide, the ethnic tension index measures the degree of tension within a country attributable to racial, nationality, or language divisions.54 The table above shows that the coefficient for ethnic tension is significant, indicating that higher ethnic tensions adversely affect export performance. Given the close link between ethnic tensions and land ownership issues in Zimbabwe, it is plausible that the results reflect the adverse impact on exports of the fast-track land reform.

76. This section presents an analysis of other qualitative factors that affect export performance that are difficult to incorporate in the quantitative analysis. It is based on two sources: (i) The Growth Competitiveness Index (World Economic Forum) is composed of three pillars for 104 countries: the quality of the macroeconomic environment, the state of the country’s public institutions, and, given the increasing importance of technology in the development process, a country’s technological readiness. (ii) The Snapshot of the Business Climate (World Bank) identifies specific regulations and policies that encourage or discourage investment, productivity, and growth and compares Zimbabwe with regional averages. The results are summarized in Table 1.

77. The performance of Zimbabwe’s official exports is significantly affected by the parallel market exchange rate and ethnic tensions. Policies that give rise to a widening of the parallel market premium (such as maintaining an overvalued exchange rate and lax monetary and fiscal policies) would, other things equal, adversely affect the performance of “official exports”. Conversely, exchange rate unification and tight macroeconomic policies can be expected to improve export performance. Similarly policies that improve governance and reduce ethnic tensions (particularly in this context, an orderly resolution of land issues) can be expected to have a beneficial impact on exports.

The collapse of the commercial farming system also resulted in increased reliance on government-supplied inputs (seeds, fertilizers), which have often been delayed (See Chapter II on “Land Reform, Agricultural Policies, and Outcomes).

Such a formulation—where the supply of official exports is a function of both the real parallel and real official exchange rates—would be consistent with a model where the variable cost of supplying (or distributing to) the official and parallel markets differ (for a given good), but the same fixed factor is used in production. The (variable) cost of distribution are aimed to be measured by domestic prices (See Coorey (1990), p. 178).

Given the times series component of the data, dynamic heterogeneous cointegrated panel data models—which allow for heterogeneity in parameters and dynamics across exports to the different countries—were also estimated. The variables were found weakly integrated of order 1 and formed a cointegrating vector. 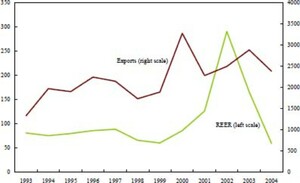 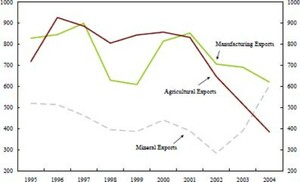