41. Until mid-2003, inflation closely tracked the growth rate of monetary aggregates. However, since late 2003 the substantial decrease in velocity and increasing levels of real money balances have reflected a divergence inflation and monetary expansion. Possible explanations for the divergence could include an unstable demand for money; a sudden shift in the underlying demand for real balances due to a sharp change in an explanatory variable; or a structural break or aberration in a normally stable money demand relation reflecting some unexplained factor, including possibly repressed inflation (given administered prices) or measurement errors in the consumer price index.

43. Money growth28 and inflation paths started to diverge from late 2003. Inflation soared from about 20 percent in December 1997 to a peak of 623 percent in January 2004, but decelerated sharply from March to around 130 percent at end-2004. Broad money growth, however, started decelerating only in July from over 400 percent at end-2003 to some 130 percent by end-December 2004.29 This is contrary to the experience under recent stabilization efforts in most countries, where inflation inertia has been evident. That is, inflation lags—rather than leads—the decline in money growth because price and wage expectations are likely to be based, at least partly, on the past behavior of inflation and expectations of the future stance of monetary policy are likely to react slowly to shifts in the observed rates of money growth. Accordingly, changes in the rate of monetary expansion would be slow to translate into changes in the rate of inflation. Further, a significant monetary tightening might not be perceived as credible until well into the stabilization program. By contrast, prices in Zimbabwe appear to have responded to factors other than just changes in monetary policy.

44. Velocity30 declined in the same year that inflation started to fall. In 2003, the significant rise in velocity was associated with the sharp acceleration in inflation, but declined quite quickly in 2004. By contrast, a sharp increase in the level of velocity is common during the initial stages of stabilization,31 followed by a decline when stabilization is achieved.32

45. Zimbabwe’s real money balances started increasing in 2004 while inflation was still very high. This is at odds with the “conventional wisdom” that the evolution of real balances typically exhibits a U-shaped pattern over the course of a stabilization program,33 with a decline during the initial phases of a program. The period of declining real money balances normally coincides with high but rapidly declining inflation, while the increase in real money balances is accompanied by relatively stable and moderate inflation rates. However, in most cases, the rate of increase in this period of remonetization is smaller than the rate of decrease during the demonetization period, so that the U-shaped pattern is not symmetric.

B. Estimating a Money Demand Equation

where (M / p)d is the demand for money in real terms, r is the interest rate, W is wealth (which is proxied by real income), h is the ratio of human to nonhuman wealth (not used in our empirical work), p is the price level and (1/ r) (dr /dt) and (1/ p) (dp / dt) are expected rates of change in interest rates and prices. The stability of the long-run relationship is assessed through the traditional specification (the log-linear form of Equation (1.1)):34

The data are broad money, M3 (m), the domestic consumer price index (p), real GDP (y)35, the 3-month time deposit interest rate (R), and the parallel exchange rate (e); and variables in lowercase are in logarithms and Δ is the first difference of natural logarithm of a variable. All data are monthly and seasonally unadjusted from 1998:1-2004:12. R, Δp, and Δe measure returns on M3, goods and US dollars, respectively. A cointegration system is estimated using the Johansen procedure.

49. While inflation is a monetary phenomenon in the long run, in the short run inflation can be influenced by a host of other factors that could lead to fluctuations in real money balances and the velocity of broad money. First, inflation may simply have an inertial component, resulting in a lagged response of prices to changes in monetary expansion. Second, changes in the demand for money due to changes in its underlying determinants (e.g. a rise in inflationary expectations) will be reflected in movements in the velocity of broad money (i.e., short-run deviations in inflation relative to the rate of monetary expansion). Third, factors such as wage policies, exogenous import price increases, and changes in domestic relative prices owing to changes in administered prices can also lead to diverging paths of inflation and money growth in the short run. Finally, observed differences in the paths of inflation and monetary expansion can reflect improper measurement of one or both of the variables.

50. Underestimation of the official inflation could explain the unconventional behavior of velocity. The actual CPI could have increased by more than the measured CPI because the index (i) suffers from inadequacies in the area of coverage (goods traded in the parallel market are not included in the CPI index), (ii) includes controlled and monitored prices, and (iii) uses outdated weights in the CPI basket—from 1997. In particular, Kovanen (2003) estimated that if a full price liberalization would have taken place in April 2003 with administered prices being adjusted to market levels, overall CPI would have adjusted upward by about 47 percent. Moreover, more recently, domestic prices of energy were allowed to remain low in the face of increases in prices of energy imports. In addition, the parallel market premium widened sharply from 13 percent in January 2004 to about 53 percent in December 2004 and, although the pass through to actual market prices may have been relatively rapid (anecdotal evidence suggests that this is normally the case), the increase may not have been fully captured by the measured CPI. Therefore, these factors put together could have understated inflation during the sharp recorded disinflation in 2004 and explain the dramatic fall in velocity.

51. The empirical results indicate that, except for 2004, a stable demand for money as a function of parallel market exchange rate, inflation and real output can be found in Zimbabwe. The paper explores whether the outcome in 2004 can be explained by a sudden sharp shift in some explanatory variable during that period or a breakdown in the demand for money relationship. When controlling for movements in the parallel market exchange rate, inflation and real output, the analysis shows a structural break in 2004. Despite the depreciation of the parallel exchange rate in 2004, real money balances increased. Although one explanation could be that expected inflation fell quickly, this behavior is not normally observed in disinflation episodes where there is inflation inertia and a lag in the adjustment of expectations. It is therefore difficult to identify the factors could explain the unconventional behavior of velocity in 2004, although repressed inflation and the mismeasurement of inflation are possibilities.

All growth rates in the paper are twelve-month changes.

Policy interest rates were raised sharply in the first quarter of 2004 (reaching a peak at 5,242 percent in annualized basis in March 2004) and subsequently lowered as inflation declined, but real interest rates were nonetheless maintained at very high levels throughout the year. However, with high real interest rates and an increasingly overvalued official exchange rate putting pressure on domestic producers and exporters, the Reserve Bank of Zimbabwe (RBZ) continued to operate its subsidized credit facility, which provided low-interest loans to selected borrowers.

Estimates for velocity are derived as an implied index from the path of money, prices, and real output following the standard Fisher equation with π equal to the year-on-year change in the consumer price index rebased to the GDP deflator in 2000, M to broad money, V to velocity of broad money and Y to real GDP).

Stabilization is defined as being achieved in the first month when 12-month inflation falls below 40 percent.

In the long-run, the expected and actual values of the variables determining money demand will coincide, and Equation (1.1) can therefore be rewritten in terms of the actual rate of inflation, Δp, and the actual rate of depreciation, Δe.

Kovanen (2004) estimated extensive specifications of long-run money demand for Zimbabwe from 1980 to 2001 using the official exchange rate, inflation, financial innovations, real GDP and different monetary aggregates (currency, narrow money and M2). He concluded that a stable relationship could be found during 1980-1995 for currency demand, but was unable to find a stable relationship for the latter period or other monetary aggregates.

Given the short time period considered, the results of any formal unit root test should be considered highly tentative.

Following Kremers and Lane (1990), a (9-month) lag in inflation and the exchange rate was used as independent variables in the estimation.

The low income elasticity might reflect the use of a cubic spline interpolation method, which does not capture seasonal variation that could be important in Zimbabwe. Kovanen (2004) used a monthly manufacturing index and Jenkins (1999) used agricultural output to proxy the seasonal pattern, however, none of these series are available for recent years. Moreover, it is not clear how meaningful the real GDP data is given the large parallel market activity in the country.

There is no time series available on a market-based rate of return on an alternative asset to money. 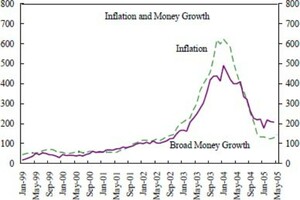 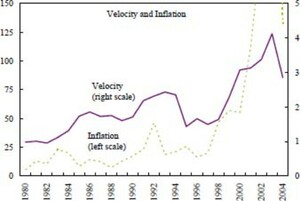 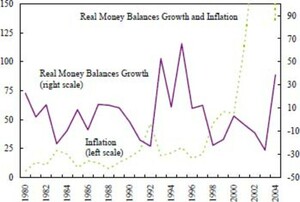 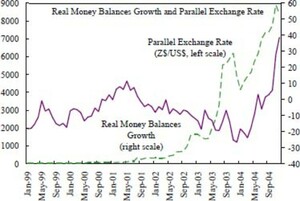 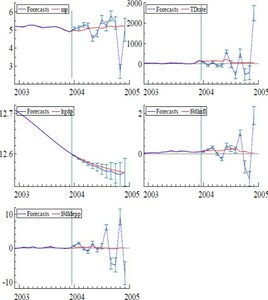 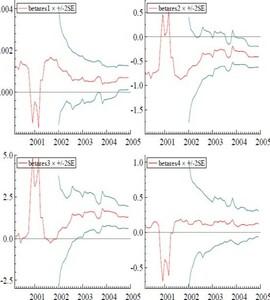 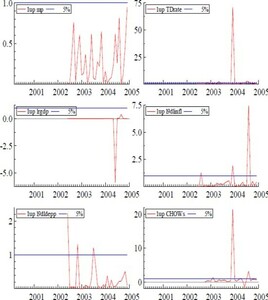