34. While fiscal deficits have typically been at the heart of inflation, particularly in high and hyper-inflation developing countries, the normally positive long-run relationship is not immediately evident in Zimbabwe for the period 1997-2004.22 The deficit-inflation relationship has been influenced in recent years by an overvalued official exchange rate and quasi-fiscal activities of the Reserve Bank of Zimbabwe (RBZ), including producer and credit subsidies, exchange rate-related losses from multiple exchange rates, and interest payments on sterilization operations. High inflation itself has also affected the size of fiscal deficits by eroding real government expenditures such as wages and salaries, with the deficit ballooning at intervals when these expenditures are ratcheted up in order to catch up with inflation. Three distinct phases of this relationship can be identified for Zimbabwe.

35. In the first period (1997-2000), mounting fiscal deficits contributed to a rise in consumer price inflation as would normally be expected. A large unbudgeted payment to war veterans in 1997 was followed by significant increases in civil service wages in the run-up to the parliamentary elections in June 2000. Together with a sharp increase in defense spending reflecting continuing involvement in the Democratic Republic of Congo (DRC) conflict and a surge interest payments, these expenditures pushed the overall budget deficit to nearly 18 percent of GDP by 2000.23 Broad money growth picked up from 14 percent in end-1998 to nearly 60 percent by end-2000. As a result, year on year consumer price inflation rose from 24 percent in January 1998 to over 55 percent by December 2000.

B. Second Phase (2001-03): Accelerating Inflation and a Decline in Deficits

37. Broad and reserve money grew sharply during this period, driven mainly by credit to the non-government sectors as the quasi-fiscal activities of the RBZ expanded. With the exchange rate that was held broadly constant—initially at Z$55/US$ and then at Z$824/US$—the official exchange rate became increasingly overvalued.24 The authorities attempted to compensate the burden on exporters by providing producer subsidies and credit to the private sector at highly concessional rates through special credit facilities at the RBZ. As nominal interest rates rose with inflation, the implicit subsidy on these credits increased. Although fiscal deficits contributed, it was the expansion of the RBZ’s quasi-fiscal activities that mainly fueled the sharp increase in reserve money as well as broad money during this period (see figure below). The growth of the monetary aggregates picked up to some 400 percent by end-2003 while consumer price inflation accelerated sharply to nearly 600 percent during the year.

C. Third Phase (2004): Shift in the Financing of Deficit and Fall in Inflation

38. The relationship between deficits and inflation reversed during the third phase in 2004, as inflation fell dramatically despite a rise in the fiscal deficit. Although revenues increased sharply (reflecting new measures including the introduction of a VAT at the beginning of the year), the fiscal position deteriorated in 2004 because of an even sharper rise in government spending. Total expenditure increased from a range of 20-27 percent of GDP in 2001-03 to some 40 percent of GDP in 2004 as spending on wages, capital projects and transfers picked up ahead of the parliamentary elections in March 2005. However, the rate of consumer price inflation decelerated as the RBZ tightened monetary policy (interest rates rose sharply in the first quarter of 2004) and the financing of the fiscal deficit shifted towards non-RBZ domestic borrowing. With the government increasingly resorting to treasury bill sales,25 the expansion in net credit to government from the RBZ was contained. Reserve and broad money growth slowed and inflation declined to around 133 percent by end-2004, as the RBZ kept interest rates high and engaged in substantial mopping up operations to offset (at least partly) the provision of liquidity support to troubled banks and the monetization of exchange losses.26

39. While the shift in the financing of the deficit towards non-RBZ sources reduced inflationary pressure, it also resulted in some crowding out of credit to the private sector. The share of government borrowing in overall credit growth increased from 17 percent in 2003 to over 31 percent in 2004, squeezing the private sector. Subsidized credit facilities were maintained to ease the burden on producers from the high (double-digit) real interest rates and the increasingly overvalued tender rate (indicated by the widening parallel market premium).

40. Although fiscal deficits and inflation are clearly related, the relationship has not been a simple positive one in Zimbabwe. Fiscal deficits have experienced sharp swings, partly reflecting election cycle, but inflation has not always followed in a similar direction. The analysis above suggests three main factors that complicated the relationship:

There may also have been an attempt to make up for a shortfall in external financing as two successive adjustment programs supported by Fund Stand-By Arrangements in 1998 and 1999 went off-track.

Although the government pays highly negative real interest rates on treasury bills, banks and other financial institutions (pension funds, insurance funds) appear to have hold them willingly partly because there are few alternatives, other than real assets, that provide a better rate of return. Many nonbank financial institutions’ holdings of treasury bills exceed the mandated liquidity ratio.

Exchange losses stemmed mainly from the fact that although exporters were paid the more depreciated tender rate, almost half the inflows to the official market were sold outside the tender at Z$824/US$ for official imports of oil, electricity and essential inputs.

Zimbabwe: Shift in Financing of Deficit 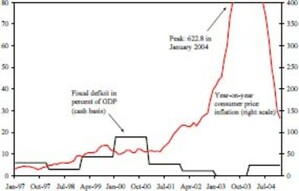 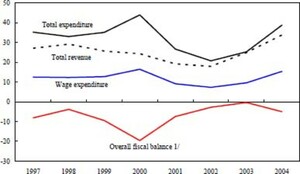 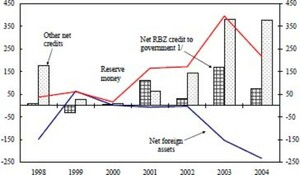 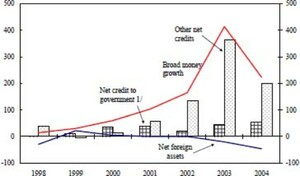 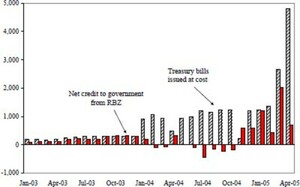