This Selected Issues paper on the United States examines the effect of the structure of the mortgage market on real housing activity and housing prices. The market-based financial structure has reduced the volatility of mortgage lending. Changes in the structure of the mortgage market have coincided with lower volatility of real housing activity. Regional income growth and unemployment rates have statistically significant and correct signed effects on housing prices. Tests of the relative importance of mortgage market structure and macroeconomic variables suggest an important effect from the financial structure.

This Selected Issues paper on the United States examines the effect of the structure of the mortgage market on real housing activity and housing prices. The market-based financial structure has reduced the volatility of mortgage lending. Changes in the structure of the mortgage market have coincided with lower volatility of real housing activity. Regional income growth and unemployment rates have statistically significant and correct signed effects on housing prices. Tests of the relative importance of mortgage market structure and macroeconomic variables suggest an important effect from the financial structure.

1. After rising steadily through the 1960s and 1970s, labor’s share of national income in industrial countries experienced a decline in recent decades (Figure 1). While temporary and cyclical factors may have played a role (such as wage restraint in response to slower growth), the pervasiveness of the trend suggests that it may have also reflected deeper forces. This paper empirically compares the role of three such factors in explaining movements in labor’s share over the last 40 years—factor-biased technological progress, openness to trade, and changes in employment protection.

3. This paper jointly examines the effects of technological progress, globalization, and employment protection on the labor share. Some of these factors—notably, technological progress and opening to trade—improve the allocation of factors of production and raise national income.7 Leaving these beneficial effects aside, the paper focuses on the more limited question of income distribution between capital and labor.

4. The results suggest that the rise and fall in labor’s share in national income largely reflect changes in the nature of technological progress, as well as trends toward more openness to trade. Before 1985, more rapid technological progress appears to have boosted labor’s share of national income. In contrast, the post-1985 IT revolution appears to favor capital. In addition, trade openness may also have played a more important role in eroding returns to labor in recent decades.

B. The Empirical Approach

5. Several factors may affect labor’s share of the national income:

6. These linkages were tested on a panel of 18 industrialized countries over a period of 40 years (1961-2000). The data are averaged over successive 5-year periods to eliminate cyclical effects. Since most studies identify a change in the nature of technological progress and a (possibly related) acceleration in the globalization process in the mid-1980s, the sample is split in 1985, with the earlier period designated “pre-IT revolution” and later period “post-IT revolution.”

7. The basic specification is a panel regression with country fixed effects.11 Different measures of the labor share were regressed on explanatory variables capturing the effects of technological change, openness, and employment protection:

where Y is a measure of labor’s share, X is a matrix of explanatory variables, ui is the error term, and the β s represent estimated coefficients. To check the robustness of our results, the model was also estimated in first differences:

8. Both equations were estimated using various proxies for the labor share and the three explanatory factors. The data used were the following (see Appendix for sources and countries):

9. A wide range of possible specifications were examined. Bivariate regressions indicated that the explanatory variables affected labor compensation with the expected sign. However, multivariate estimates suggested that many of the variables representing similar concepts—for example, the two measures of productivity—were collinear. As a result, the focus moved to specifications including only one proxy variable for each explanatory factor, plus the unemployment rate.

10. In the preferred specification, the right-hand side variables were trade as a ratio to GDP, lagged labor productivity per worker, and employment protection (Table 1). The ratio of trade to GDP is the most frequently used measure of openness. Lagged labor productivity per worker was used to account for delays between changes in productivity and in real wages. Employment protection appears to be the most direct measure of labor’s bargaining power.

11. The results suggest that the nature of technological progress changed in the 1980s, moving from being labor augmenting earlier to capital-augmenting more recently. For example, in the regressions using compensation share, the coefficient on lagged labor productivity switches from +0.35 before 1985 to -0.25 after, and both are highly statistically significant. As a result, while before the mid-1980s productivity growth increased labor’s share in national income, since 1985 productivity the impact has been the opposite. Openness to trade has a negative and relatively stable effect on the labor share in industrialized countries, consistent with the prediction of the Heckscher-Ohlin theory. While labor protection policies tend to increase the income share of labor, the effect is small and generally not significant.

12. Technological progress has been an important driver of labor’s share, while trade openness has become more important in recent years. Changes in the labor’s share during the pre-IT revolution period mostly reflect productivity increases, partly offset by increases in trade. After the IT-revolution, changes in productivity remain an important driver of the distribution of national income, but their importance is now approximately on a par with the impact of trade openness. Changes in employment protection have small effects in both periods.

13. Regression results were broadly similar across a range of specifications.13 Robustness checks included estimating the equation using first differences, different proxy variables for the hypotheses, dropping countries or periods from the sample, including the inflation rate in the regressions (to account for the impact of nominal interest payments on nominal incomes), and dropping the unemployment rate. None of the changes altered the basic character of the results.

14. The estimating equation predicts trends in national income shares in most of the 18 countries in the sample relatively well, including in the United States (Figure 2). In the pre-IT revolution period, the model predicts a relatively muted increase in labor’s share in U.S. national income of some 3½ percent of GDP, and a 2-percentage point fall in labor share since 1985. Trends in other countries are generally more pronounced, reflecting stronger movements in underlying determinants, although the model overpredicts pre-1985 trends in Spain and the United Kingdom and post-1985 trends in Japan. Other regressions, not reported for the same of brevity, suggest that similar explanatory variables help explain the fall and then rise in income inequality within countries.

15. The results in this paper suggest that the rise and decline in labor share since 1960 in industrial countries may have reflected underlying trends in the global economy. In particular, the distribution of national income between labor and capital appears to have reflected changes in the nature of technological progress, as well as the impact of an increasingly globalized world economy. One should recall, however, that even as labor’s share of national income has been declining, workers spending power has also been supported by higher capital income, both directly and indirectly through its impact on personal wealth.

This assumes that the absolute value of the elasticity of substitution between labor and capital is below one.

Time-fixed effects were initially included, but were dropped after a Hausman specification test indicated that they were not necessary.

It would be preferable to use total factor productivity, but data were not available for a sufficient number of countries over the time period.

Details are available from the author. 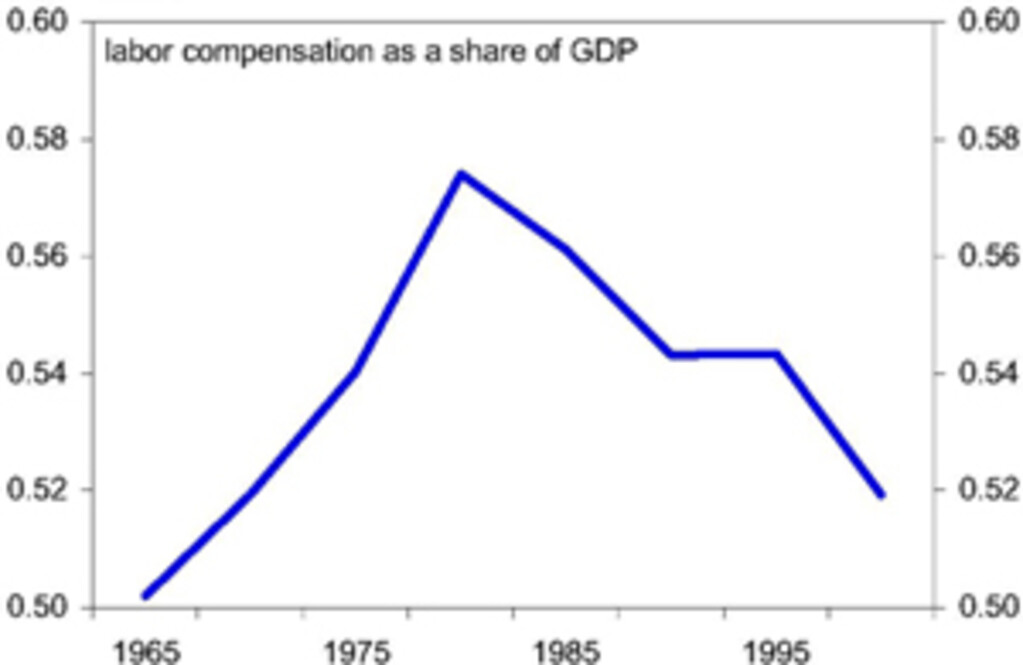 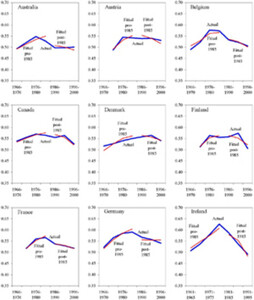 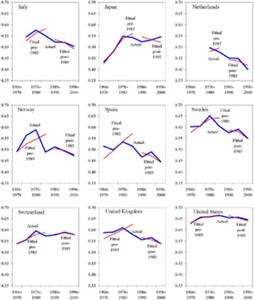