This Selected Issues paper on the Republic of Kazakhstan underlies growth of the non-oil sector, fiscal management of oil wealth, and bank credit growth. The share of tradables in the non-oil sector has declined significantly, both in terms of value added and employment, while many nontradable activities, especially services and construction, have expanded. Kazakhstan can sustain non-oil deficits of more than 5 percent of GDP in the near term without reducing the value of oil wealth. Recent developments in the pattern of bank lending and borrowing have led to increased exposure to the property sector and international financial markets.

This Selected Issues paper on the Republic of Kazakhstan underlies growth of the non-oil sector, fiscal management of oil wealth, and bank credit growth. The share of tradables in the non-oil sector has declined significantly, both in terms of value added and employment, while many nontradable activities, especially services and construction, have expanded. Kazakhstan can sustain non-oil deficits of more than 5 percent of GDP in the near term without reducing the value of oil wealth. Recent developments in the pattern of bank lending and borrowing have led to increased exposure to the property sector and international financial markets.

1. The emergence of the hydrocarbon sector as a major engine of growth in Kazakhstan has prompted the authorities to intensify efforts to diversify the economy. To gauge the effectiveness of such efforts, and more generally to assess the performance of the non-oil sector, a clear understanding of what constitutes the oil and non-oil sectors is critical.

This chapter seeks to address the following issues:

2. Oil and gas extraction activity has driven overall economic growth over the past decade, although non-oil output has also accelerated in recent years. Hydrocarbon production has more than doubled since 1996. Since 2000, however, the other sectors of economy also started to show significant growth, benefiting from positive knock-on effects of booming oil revenues. Growth in the construction and transportation sectors, where linkages to the oil sector are the most direct, has been particularly rapid.

3. National accounts data, however, tend to understate the true share of the oil sector in the economy and its contribution to overall growth. A narrow definition of the hydrocarbon sector covers only oil and gas extraction activity.2 Thus, all services directly related to extraction—such as construction of extraction facilities and transportation of petroleum—are, in effect, placed in the non-oil sector, thereby resulting in overestimation of non-oil activity. A broader measure of the hydrocarbon sector may be obtained by including such services as part of the sector’s activity.

4. Sectoral input/output data can be used to estimate the “broad” oil sector, which includes inputs from construction, transportation and other sectors directly related to hydrocarbon extraction.3 Inputs from these sectors to oil production were added to the value added by oil extraction activity to construct a “broad” measure of the hydrocarbon sector. At the same time, the contribution of these sectors to non-oil activity was adjusted correspondingly to exclude inputs to oil production activity. The adjustments were significant, representing on average about 40 percent of total value added in the construction sector and 10 percent in the transportation sector.

5. The adjusted “broad” share of the hydrocarbon sector is significantly larger than the unadjusted narrow share. In particular, the adjustment for oil-related services implies that the share of hydrocarbons rose from 9 percent of (real) GDP in 1998 to 16 percent in 2004, compared to 3 percent and 5 percent, respectively, under the narrow definition. Correspondingly, the share of the non-oil sector is smaller under the adjustment.

6. The adjustment for oil-related services activity also implies somewhat lower non-oil sector growth—and faster oil sector growth—in recent years. Real non-oil output growth, after adjusting for oil-related services, has averaged over 8 percent a year since 1998, compared with about 9 percent annually without the adjustment. The component of transportation, construction, and other services directly associated with oil has grown more rapidly than the non-oil related component. For example, real output in oil related transportation has increased by more than 11 percent a year, on average, compared to about 8 percent for the rest of the transportation sector.

B. Non-oil Growth Trend and Sources of Growth

8. An assessment of the trend growth rate of non-oil output in recent years is useful in evaluating near-term growth prospects. Results from statistical methods for estimating trends must be interpreted with caution, however, because of the very short data series and the major structural changes that have taken place in the Kazakhstan economy. Moreover, these methods impose a zero output gap on average over the sample period, which, likely, is not appropriate for a transition economy. Nevertheless, such methods provide useful insights.

9. As noted above, the estimated trend growth rate of the non-oil sector has been around 8 percent over the past half decade. Trend output growth is estimated based on the Hodrick-Prescott (HP) statistical filter over 1998–2004. This sample period was chosen to minimize the impact of structural change, which was greatest during the early 1990s (the early years of the transition to a market economy).5

10. The non-oil output remained below its estimated trend level during 1999–2002, but has exceeded it since then. This result, however, is sensitive to the choice of the sample period. Nevertheless, the estimates point to the possible emergence of capacity constraints in recent years.

11. Growth accounting methods can also shed light on past growth trends and growth prospects. Non-oil sector growth may be decomposed into components associated with changes in capital and labor inputs, and total factor productivity (TFP). Assuming output (Y) follows a Cobb-Douglas production function with employment (L) and capital (K) as factors of production, the change in total factor productivity in logarithmic terms is

where gi is the growth rate of variable i and α is the elasticity of elasticity with respect to labor. TFP may be interpreted as a residual that reflects other factors of production and changes in efficiency in the use of factor inputs. Capital stock is calculated according to

where K denotes the capital stock, δ the depreciation rate, and I investment in period t.6

12. The results indicate that both productivity gains and factor accumulation have contributed to non-oil output growth (Figure I.1.). The average annual productivity growth over the period 1998–2004 is estimated at about 4 percent, in line with findings for other transition economies. The estimated contribution of capital and labor accumulation, however, is considerably stronger than that for other economies.7

Average Growth and Productivity for the Non-Oil Sector

Average Growth and Productivity for the Non-Oil Sector

13. The implications for near-term growth prospects in the non-oil sector are also broadly in line with those obtained with statistical techniques. The growth decomposition indicates a steady decline in the contribution of labor accumulation to overall growth, possibly indicating that the economy is approaching full employment.8 Thus, employment growth is likely to contribute much less to overall growth in the future. If TFP and capital accumulation rates remain broadly in line with the recent past, this would suggest overall non-oil sector growth of 6–7 percent a year over the medium term.

C. Investment and Labor Market Trends within the Non-oil Sector

14. Non-oil sector investment has increased markedly, although the transportation and communications sector, with the strongest link to the oil industry, accounts for the bulk of the increase. While data on the share of transport and construction investment directly related to the hydrocarbon sector are not available, the higher growth of oil-related transport and construction activities relative to the non-oil portion of these activities suggests that a large part of the increase in investment in these sectors relates to oil. Hence, the increase in “true” non-oil investment is likely to have been smaller than indicated by the aggregate data.

15. Within the non-oil sector, employment growth in nontradables has generally been stronger than in tradables. The rate of employment growth in the oil and other mining sectors (including metals) has been about 8 percent, compared to less than 3 percent for the non-mining sector as a whole. Within the non-mining sector, the shares of the public administration and construction sectors in total employment have grown, while the share of manufacturing has declined significantly.9 Interestingly, agriculture’s share in total employment rose sharply in the late 1990s, but has declined in recent years.10

16. Large wage differentials between the mining and non-mining sectors have persisted. Average real wages in the mining sector remain close to twice the level of the average wage in the economy as a whole (including the mining sector). Since 2000, however, there has been some narrowing of the gap, mainly on account of rapid wage growth in transportation, trade, and other services.

18. Adjustments for oil-related services activity reduces the estimated size—and growth—of Kazakhstan’s non-oil sector. Even after these adjustments, however, recent growth trends in the non-oil sector have been impressive. Trend-filtering and growth accounting techniques suggest that real non-oil sector growth of 6–8 percent a year can be maintained over the near term. The analysis also indicates, however, that capacity constraints may be emerging, and that the prospect of a major contribution to growth from increased labor inputs has weakened as the economy approaches full employment. Within the non-oil sector, a resource shift toward non-tradable activities appears to be underway. The share of tradables in the non-oil sector has declined significantly, both in terms of value added and employment, while many nontradable activities, especially services and construction, have expanded.

Difficulties in disaggregating oil and non-oil GDP are present, to varying degrees, in most oil-producing economies.

Other input sectors for oil extraction include trade, real estate, and financial services. The metallurgical industry also provides inputs to the oil sector. The “broad” measure of the oil sector excludes value-added in oil refining, which is primary used for domestic consumption and relatively insignificant in comparison to oil extraction and accounts for about 5 percent of oil-related output.

Other statistical methods, including linear and exponential filtering, yield very similar results. Sensitivity of the results was also checked by varying the sample period to 1999–2004.

Due to unavailability of data on employment and capital stock in the oil sector, non-oil output for this exercise was defined as the total output less value added in the mining sector. The average non-oil growth rate under this definition was 7.1 percent, somewhat lower than the 8 percent under the adjusted “broad” definition noted above, likely on account of the exclusion of metals production from the non-oil sector. Elasticity α and depreciation rate δ are assumed to be 0.5 and 5 percent, respectively, but alternative calculations for α€ [0.3-0.7] and δ€ [3-10] percent were also carried out. Labor data were taken as employment in the non-mining sector. Investment data from the National Statistical Agency of Kazakhstan were used to construct a capital stock series. The capital stock data from Chapter II, IMF, Republic of Kazakhstan—Selected Issues and Statistical Appendix (IMF Country Report No. 03/211) were used for the initial period.

The share of manufacturing in total employment has also declined in other transition economies, possibly reflecting an excessively large industrial structure at the start of the transition process.

The large increase in agricultural employment in 2000 is partly due to better measurement of the informal economy.

Labor productivity is defined as output (measured in constant 1999 prices) per worker.

The Non-Oil Sector in Percent of GDP 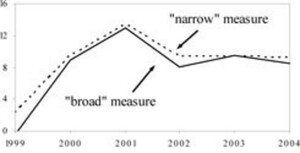 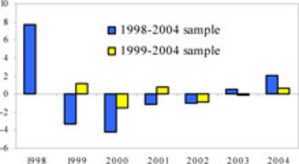 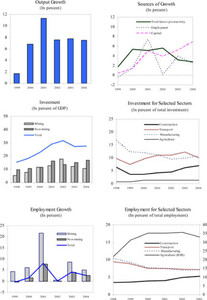