II. Market Indicators of Confidence in the km and the Banking System Since 20001

1.This chapter examines monetary and interest rate data to provide a perspective on the robustness of financial confidence in Bosnia and Herzegovina (BiH).

2.The currency board is almost 8 years old. International reserves stand at 6 months of merchandise imports. And after the 1998–2002 restructuring, banks are booming. These signal confidence in the KM and in the banking system and are major achievements.

3.But confidence can shift quickly. International experience shows a number of countries which enjoyed periods of confidence subsequently witnessed turbulence.2

4. Following the 1992-95 civil war there were a number of currencies circulating in Bosnia and Herzegovina, including the Bosnian dinar, Yugoslav dinar, Croatian Kuna, and the Deutsche Mark (DM). The currency board was set up in 1997 and a new currency, the convertible mark (KM), was introduced, pegged at KM1= 1 Deutsche Mark. It was subsequently pegged at KM 1.9558=Euro 1, upon the abolition of the DM.

5. Since then the KM has largely displaced the other currencies (though the Euro also circulates widely), and the currency board has delivered Euro area levels of inflation. Gross international reserves and net free reserves (net reserves minus reserve money) have risen steadily to Euro 1,768 million and Euro 88 million, respectively, at end-2004. And confidence in the KM was strengthened by the smooth transfer to a new board for the Central Bank of Bosnia and Herzegovina (CBBH) in August 2003, and an uneventful transition from an expatriate to a Bosnian governor at end-2004.

6. Meanwhile, the banking system was weak by war’s end in 1995. Most bank assets were state owned, over 90 percent of loans were nonperforming, and the confidence of depositors was very low.3 Moreover, most of banks’ foreign currency deposits had been seized by the National Bank of Yugoslavia prior to the civil war, thus forcing banks to freeze the foreign currency deposits of their clients. The war had also disrupted links to international financial markets, caused very high inflation, and extensively damaged the physical infrastructure of the country.

7. Since then there has been much progress. New modern banking laws were passed in both entities, and the banking sector has been almost completely privatized, with the majority of assets now under foreign ownership. In the process considerable consolidation has occurred—the number of banks has declined from 72 (55 in the Federation and 17 in the Republika Srpska (RS)) in 1998 to 33 (24 in the Federation and 9 in the RS) at end-2004.4 Of the banks existing at end-2004, five were under provisional administration—four in the Federation and one in the RS.

8. Banking supervision has been entrusted to two entity banking agencies— Federation Banking Agency and the Banking Agency of Republika Srpska, with a coordinating role for the central bank. With some technical assistance as well as Fund program conditionality, supervisory quality has improved significantly in the past two years. Moreover, plans are underway to merge the two banking agencies into the CBBH in order to strengthen the independence of bank supervision. And a deposit insurance scheme has been successfully established—by end-December 2004, 21 banks were members.

9. These reforms—to the central bank and to the banking system—were aimed to secure stability and to build an efficient financial system. And both sets of reforms reinforce each other—a strong monetary arrangement builds confidence in banks, and vice versa. Has that confidence been secured?

C. Confidence in the KM

10. Recent data suggests that confidence by Bosnian citizens in the KM has improved since 2000.

11. Confidence in the KM is also signaled in the spread between Euro and KM interest rates (Figure 2). Because there is no money market rate for Bosnia and Herzegovina, we proxy this spread using the mid-points of bank demand deposit and short term lending rates in BiH and the Euro area.5 Thus the results should be interpreted with caution, since the spread could reflect a variety of factors influencing the Euro area and Bosnian banking systems, rather than a pure risk premium between the two currencies. Nonetheless, the trend decline in the spread observed in the data since January 2003 is suggestive of increased confidence. This spread is still around 2 percentage points, but it has fallen by ¾ percentage point since January 2003. And—the same issue measured a different way—the spread between Bosnian central rates and 3-month EURIBOR also declined through 2004 and early 2005, after being stable since mid-2002.

12. However, domestic banks do not appear to be as persuaded as the Bosnian public about the KM.

13. Importantly, however, the increase in international reserves of the CBBH and reserve money from mid-2003 is not evidence of strengthening confidence in the KM. Instead, it almost entirely reflects banks’ adjustments to tighter prudential regulations. In the context of a currency board and free capital mobility, traditional monetary policy instruments, such as open market operations or changes in policy interest rates, have limited effectiveness. Thus, the authorities have sometimes used supervisory measures to secure prudential and broader monetary goals. In particular, in response to concerns about the credit boom—and the fact that many banks had run foreign exchange exposure positions outside international norms—the authorities took appropriate measures from June 2003 to tighten the regulatory framework:

14. These two reforms required banks to increase their deposits at the central bank. Banks steadily increased their borrowing from abroad (largely from their parents), converting the borrowed funds into short term KM deposits held with the CBBH. The currency conversion in this operation helped them to meet the steadily tightening forex exposure rules. And the short term assets created in this operation—the deposits with the CBBH—helped them to meet the liquidity rules. As a result, banks’ reserves at the central bank increased steadily, month-end by month-end, as the forex and liquidity regulations were steadily phased in. And, pari pasu, their NFA declined (Figure 5, lower LHS panel).

16. Three further aspects of monetary developments confirm this interpretation of the regulatory—rather than a KM confidence—motive for the increased commercial bank reserves with the CBBH, and therefore in international reserves, from mid-2003.

17. This combined evidence suggests that confidence in the KM has increased significantly since 2000, but that the rise in international reserves after mid-2003 reflected the regulatory reforms, rather than mandated reserve requirement levels or further KM-confidence factors.

D. Confidence in the Banking System

18. Recent trends indicate that confidence by the Bosnian public in the banking system has also increased since 2000.

19. Looking forward, there are a number of signals to monitor which could indicate further increases in the confidence in the KM, but these will need to be interpreted with care.

20. In the case of banks, the main indicators of confidence will be the money multiplier, velocity, and the maturity of deposits. These have been trending in the right direction, but all have further to go by international standards. The main risks are indirect— through the malaise of the corporate sector. With over 60 percent of state-owned companies lossmaking, and requiring deep restructuring and many others only marginally profitable, banks run the risk of being caught up indirectly in these corporate difficulties.7

21. Moreover, the framework for banks to monitor borrower quality and recover nonperforming loans needs improvement. There have been efforts to set up a collateral and pledge registry, but these have not yet borne fruit. In this situation, banks have improvised by requiring borrowers (for consumer loans) to have personal guarantors who would be liable in case of default. However, many guarantors have guaranteed loans for multiple borrowers, and there is no satisfactory way for banks to track this, thus raising the risk that guarantors cannot meet these multiple contingent liabilities. And the court system is not yet in a position to swiftly adjudicate bank suits against recalcitrant debtors.

22. While confidence in the KM is generally much strengthened since 2000 further efforts should be made, notably because banks’ skepticism remains. Such efforts encompass a wide array of policy areas, and include the early implementation of structural reforms to promote private sector growth and competitiveness, particularly corporate restructuring. But as indicated, a drop in international reserves will not necessarily signal a loss of confidence—indeed, if it reflects changes in bank behavior, it could reflect increasing confidence in the KM.

23. Banking system restructuring has progressed at a much faster pace than corporate reforms. As a result, a relatively modern and dynamic banking sector coexists with a weak corporate sector, and it is not clear that the health of the banks can be maintained indefinitely alongside the malaise in the corporate sector. To sustain and strengthen further depositor confidence in banks, continued improvements in the quality of bank supervision, the regulatory environment, and the analytical capacity of the CBBH, alongside a determined effort to strengthen companies, will all be required. Finally, supervisors and the central bank will have to keep a watchful eye on the credit boom and stand ready to act decisively to maintain financial system stability.

The true velocity is likely higher than presented in Figure 7, since official estimates of nominal GDP exclude the large non-observed economy (see chapter 5 and IMF Country Report No. 04/54, March 9, 2004). However, the gradual decline in reported velocity suggests that the official estimate of the rate of growth of GDP may not be too far off, implying that the grey economy may be growing at a similar rate as the recorded economy.

Bosnia and Herzegovina: Currency in Circulation and Commercial Bank Deposits

Bosnia and Herzegovina: Currency in Circulation and Commercial Bank Deposits

Bosnia and Herzegovina: Growth of Credit to the Private Sector 1/

Bosnia and Herzegovina: Demand and Time and Savings Deposits and their Interest Rates

Bosnia and Herzegovina: Spread Between Deposit and Lending Rates 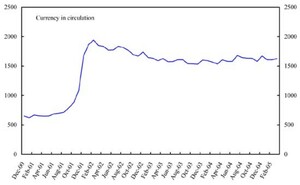 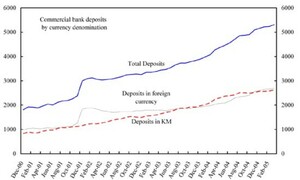 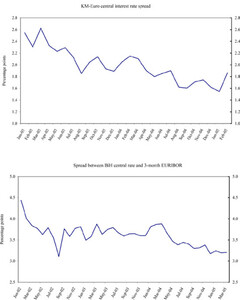 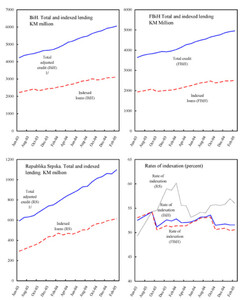 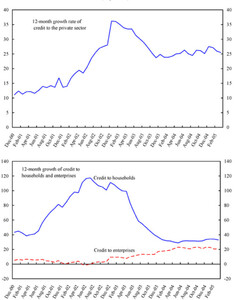 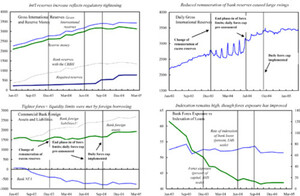 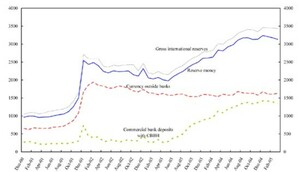 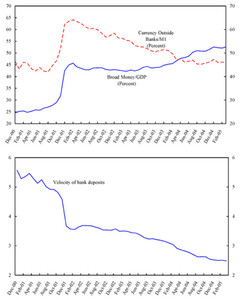 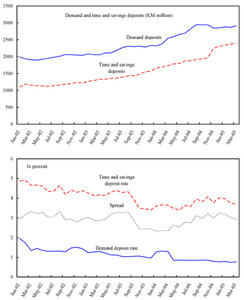 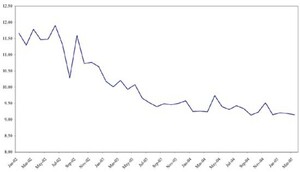