This Selected Issues paper attempts to quantify the impact of the demographic shift on growth and public finances in Switzerland. It examines the intertemporal consistency between current policy plans and unfunded liabilities, focusing primarily on social security, and explores policy options. It finds that so far, the impact of aging on the economy has been moderate. The number of pensioners has risen in recent years, but this is mainly owing to early retirees taking advantage of the generous disability and pension systems. The paper also examines the need for health care reforms in Switzerland.

This Selected Issues paper attempts to quantify the impact of the demographic shift on growth and public finances in Switzerland. It examines the intertemporal consistency between current policy plans and unfunded liabilities, focusing primarily on social security, and explores policy options. It finds that so far, the impact of aging on the economy has been moderate. The number of pensioners has risen in recent years, but this is mainly owing to early retirees taking advantage of the generous disability and pension systems. The paper also examines the need for health care reforms in Switzerland.

A. Health Care Spending in Switzerland

65. Switzerland’s health care system produces good results, thanks to a high quality of services. Switzerland’s life expectancy of 80½ years is second in the world to Japan, but infant mortality is twice as high as in the best performing countries. Overall, the Swiss population is paying a high price for these results. Cost increases have resisted several attempts at reform—most recently in 1996—and are turning into a fiscal problem.

66. Switzerland has the second-highest ratio of health spending to GDP in the world. The country spends 11.5 percent of GDP on health care, more than any other industrialized country except the United States with 14.6 percent. This share has more than doubled from 5.4 percent of GDP since 1970, the steepest increase in the OECD.

68. Continued discrepancy between health care costs and income growth could put pressure on the Swiss economy. If the private sector bears the cost, lower income classes would suffer; if the public sector bears the cost, fiscal imbalances would widen. Either way, a health care sector that absorbs an ever larger share of resources will eventually lower GDP growth further. In contrast, it may be worth noting that Scandinavian countries, in particular Finland and Sweden, have managed to contain or even reduce their health-to-GDP ratios over time.

B. High Prices and Their Causes

69. Swiss health care is expensive mainly because of high prices rather than large quantities. Volume grew less than the OECD average, but relative prices grew faster. This points to distortions on the supply side of the sector. In particular, four problems may be identified: (1) regional fragmentation, (2) financial fragmentation, (3) supply-induced demand, and (4) insufficient competition.

70. Internationally, one can distinguish three basic types of health care systems. Following Oggier (2004), the key distinction is related to their financing:

71. Similar to the US, Switzerland has a mostly private health care system. Three quarters of health care costs are financed by the private sector, setting the country apart from the rest of Europe. About 40 percent of private health care costs are covered by health insurers, and the remaining 34 percent is paid by individuals out of their pockets (co-payments). Switzerland has the highest percentage of private co-payments in the OECD, where the average is only 13 percent. The state covers the remaining 26 percent of health care costs. Cantons and communes finance hospitals, while the Confederation and the cantons subsidize insurance premia of the poor. The public disability and accident insurances cover the costs for qualifying persons.

72. The strong reliance on insurance financing raises equity issues. The average private health care bill was more than SwF 5,000 per individual in 2002. Insurance premia and out-of-pocket payments have a regressive effect on income distribution—they are unrelated to income. Most affected are dependent individuals outside the labor force such as children, housewives and some of the elderly. For these persons, health care can be a considerable burden.

73. To alleviate the high cost of health care to the poor, the state subsidizes their insurance premia. The subsidy is income-related, and ensures that insurance premia currently do not exceed about 13 percent of household income. However, the mechanism is imperfect and strong regional disparities exist. Both premia and subsidies vary widely across regions. Insurance premia range from a minimum of SwF 2,300 per year in Nidwalden to a maximum of SwF 4,800 per year in Geneva (2004). They tend to be highest in cantons with a high number of physicians. Subsidies also vary greatly. While 33 percent of Swiss households received subsidies in 2004, regional values ranged from 23 percent in Aargau to 60 percent in Appenzell Innerrhoden. The Confederation contributes the lion’s share, while cantons can top up and control the distribution of subsidies. For budgetary reasons, cantons sometimes do not disburse all the funds allocated to them.

74. The subsidies for low-income households try to minimize economic distortions. Unlike payroll or income taxes, they have no immediate negative effect on labor supply and growth. As a result, the Swiss design of health care has attracted considerable attention from other European countries. However, subsidies can avoid distortions only as long as their volume does not become too large.

75. On present trend, health care can become an important fiscal problem. If the growth of health expenditures relative to income continues, more and more households would need subsidies. Recent simulations suggest that such additional expenditures could amount to 8 percentage points of GDP by 2050, which would be a serious threat to the public finances. The corresponding increase in tax rates could slow growth.

76. The effects of rising health costs on public finances and the economy can be analyzed in a general-equilibrium growth model.26 For the coming 40 years, it was assumed that the quantity and price parameters of health care would evolve as in the past decade. In particular, the quantity of health care was assumed to have an income elasticity of 2, while health care prices would increase a quarter percentage point faster each year than the GDP deflator. Some additional cost pressures were modeled based on the rising old-age dependency ratio, to capture the effects of aging, mainly in the years 2010-35.

77. To avoid income disparities, the central government would need to step up its subsidies. Direct public outlays for hospitals were assumed to grow in line with nominal GDP to keep cantonal finances in equilibrium. Increased health care cost would then be born by the private sector. Without higher subsidies, income inequality in Switzerland would increase significantly: a simulation suggests that the Gini coefficient could rise from 28.5 to 33.5. To assess the amount of subsidies necessary to keep inequalities constant, the threshold for private health spending was kept at 13 percent of household income, with subsidies covering the excess health care costs for qualifying income brackets.

78. A continued increase in health care costs would make private contributions to health insurance unaffordable for more and more households. The government would need to subsidize more and more income brackets. The model suggests that the share of subsidy recipients would rise to 41 percent of households in 2008, and to over 60 percent in 2015. The stepwise increase in the figure is due to the simplifying assumptions of the model; it would be smooth in reality. By 2050 around 90 percent of the population would depend on government subsidies. Swiss health care would be transformed into an essentially government-run system.

79. The fiscal costs would be very high. Subsidies would rise from 3 to 4 percent of GDP during the present decade, and accelerate with the onset of aging after 2010. By 2050, fiscal spending on health care would be more than 8 percentage points of GDP higher than today. To avoid an unsustainable build-up of public debt (as required by the constitutional debt brake), taxes would need to rise.

80. Tax increases of up to 8 percentage points of GDP would slow GDP growth, especially if these are affecting payrolls. With lower growth, the tax base would then narrow, and tax rates would have to increase even more to obtain the desired financing. Preliminary simulations suggest that the slowdown in annual GDP growth could reach more than 0.3 percentage points per year, which would lower the level of Switzerland’s real GDP by a cumulative 7 percentage points by 2050 compared with a scenario that does not require these tax increases.

81. Switzerland spends a high share of GDP on health care, and the current dynamics of health spending are incompatible with slow growth. Health care may thus evolve into a significant fiscal problem in coming years, unless progress is made in tackling distortions in the market for health care. The literature stresses the importance of economies of scale in health care. More centralized systems tend to have lower average cost. Switzerland in particular could reap benefits from overcoming the regional fragmentation of its health care infrastructure. The lack of coordination between cantons, and the limited regulatory powers of the Confederation make cost controls difficult. Large degrees of freedom for health providers and automatic reimbursement of costs, appear to inflate the supply of medical services. Increased government cooperation, at all levels, should thus be encouraged. In addition, potential reforms in the financing schemes could reduce incentives to accumulate higher risks in the public-sector insurance plans. Finally, consumers could benefit from a more competitive market for pharmaceuticals and the liberalization of drug imports.

The basic framework is described in the Chapter I “Intertemporal Policy Consistency in Switzerland: Is the Current Social Insurance System Sustainable?” For this health-care chapter, we added the health care sector, and a feedback loop to labor supply.

...but only one country has higher cost (the US).

The state subsidizes health costs of the poor.

Subsidies are under pressure to go up. 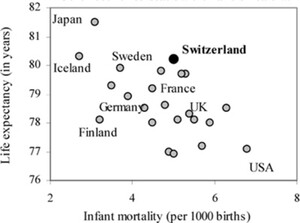 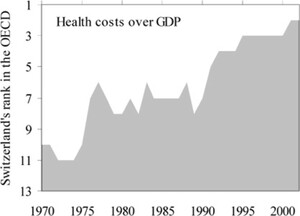 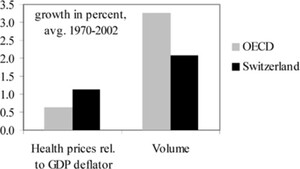 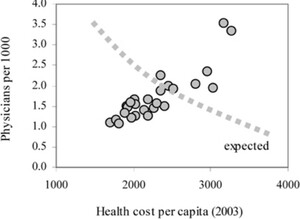 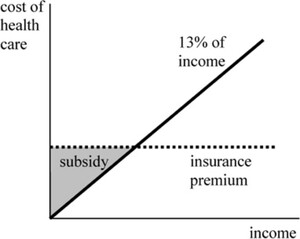 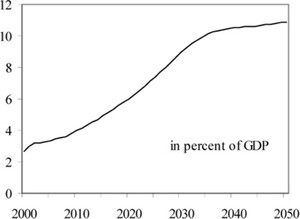 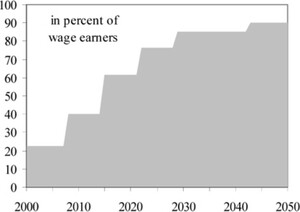 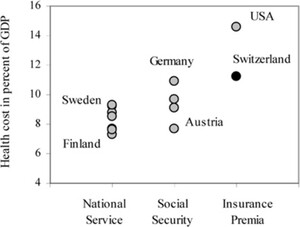