This Selected Issues paper on the Arab Republic of Egypt examines the dynamic relationship between the nominal exchange rate and prices during Egypt’s exit from a managed exchange rate regime. The exit from the peg went through several phases, including a series of step devaluations between 2000 and 2002, a first attempt at a float in January 2003, and the successful transition to a unified, flexible exchange rate system in late-2004. From 2000 to 2004, the Egyptian pound experienced a cumulative depreciation of 68 percent against the U.S. dollar.

This Selected Issues paper on the Arab Republic of Egypt examines the dynamic relationship between the nominal exchange rate and prices during Egypt’s exit from a managed exchange rate regime. The exit from the peg went through several phases, including a series of step devaluations between 2000 and 2002, a first attempt at a float in January 2003, and the successful transition to a unified, flexible exchange rate system in late-2004. From 2000 to 2004, the Egyptian pound experienced a cumulative depreciation of 68 percent against the U.S. dollar.

1. After pegging its currency to the U.S. dollar for almost a decade, Egypt began a transition to a flexible exchange rate system in 2000. The exit from the peg went through several phases, including a series of step devaluations between 2000 and 2002, a first attempt at a float in January 2003, and the successful transition to a unified, flexible exchange rate system in late–2004. From 2000 to 2004, the Egyptian pound experienced a cumulative depreciation of 68 percent against the U.S. dollar. During this period, there was an active parallel market for foreign exchange, with a premium that reached as high as 15 percent over the official (banking) rate. The parallel market rate converged with the banking rate in mid–2004, prior to the establishment of a formal interbank market for foreign exchange.

2. This chapter examines the dynamic relationship between the nominal exchange rate and prices during Egypt’s exit from a managed exchange rate regime. In theory, the movements in the nominal exchange rate since 2000 should have affected domestic prices and inflation through changes in import prices (both final and intermediate goods), as well as through expectations. A cursory examination of the data, however, suggests otherwise: inflation as measured by the consumer price index (CPI) remained remarkably low and stable from 2000 to 2003, despite the sizable cumulative depreciation of the pound (Figure 1). CPI inflation started rising only after July 2003, the first observation of a new CPI series with updated weights introduced in early 2004.2 The effects of the 2000–04 exchange rate movements on the wholesale price index (WPI) appear to have been quantitatively larger than on the CPI, but also exhibited long lags.

3. The methodology used in the chapter to measure the impact of exchange–rate movements on wholesale and consumer prices is based on a “price chain” model that seeks to identify the effects of exchange rate “shocks” at each stage of the distribution process through the estimation of a recursive vector autoregressive (VAR) model.3 This method was put forward by McCarthy (1999), and has become standard for examining empirical pass–through issues.4

4. The main findings of the chapter can be summarized as follows:

5. The VAR methodology for estimating the pass–through was applied to a selected group of emerging market countries to provide a benchmark for the results obtained with Egypt’s data.5 The group consisted of Brazil, the Czech Republic, Israel, Mexico, Poland, South Africa, and Turkey. The same methodology, variable definitions, and sample period (1995–2004) were used in all cases in order to maximize comparability.6

11. The main results of the estimation are presented in Figure 2, and the top panel of Table 3. The results show significant differences in the responses of Egypt’s WPI and CPI to an exchange rate shock. The long–run pass–through to the WPI is about one third, and its response is statistically significant at the 95 percent level at several horizons. However, the response of the CPI to exchange rate shocks is not statistically significant at conventional levels, and the point estimate for the long–run pass–through is very low (11 percent). For both price indices, the pass–through is slow: it took between six and 12 months for exchange rate shocks to affect the WPI, and from 12 to 24 months for those same shocks to have a full impact on the CPI.

12. The weak relationship between exchange rate shocks and the CPI found for Egypt is at odds with most of the findings in the pass–through literature, including those reported in Table 1. One feature that may have contributed to this result is the relatively large share of goods with administered prices in Egypt’s CPI.11 In terms of the price chain implied by the VAR (see Appendix I.1), a large share of goods with administered prices would tend to compress the markups along the distribution process and weaken the transmission of exchange–rate shocks, at least temporarily.

13. The basic results for Egypt were not altered when the estimations were conducted using alternative measures of the exchange rate (the nominal effective exchange rate instead of the bilateral L.E./U.S. dollar exchange rate), and of supply shocks (commodity prices instead of oil prices)—see Table 3.12 In all cases, the cumulative response of the WPI remained significant at several horizons after the shock, while the responses of the CPI were not statistically significant from zero.13

14. The large difference in the level and the speed of the pass–through coefficients between the WPI and the CPI is one salient result obtained in the Egypt case. This result corroborates the prima facie evidence presented in Figure 1: from 2001–03, the nominal exchange rate displayed large volatility, but CPI inflation was remarkably low and stable. Infact, the sample mean for the 12#x2013;month CPI inflation in Egypt during that period was 3.1 percent, and the standard deviation was 1.2 percent. These statistics are much lower than those observed in Egypt and other emerging markets during the whole sample period (see Table 2).

15. One factor that may account for this result is the highly persistent compression of margins that would result from a large share of administered prices in the price index. As noted earlier, this would tend to weaken the “price chain” model in its final stage (from the WPI to the CPI). To explore this possibility, three different “counterfactual” CPI indices were constructed for the years 2001–04, using the economic relationships derived from the VAR estimates. The first counterfactual consisted of an “unconditional” forecast of all five variables in the VAR model, with estimates obtained using data from January 1995 to December 2000. Since this model had difficulty forecasting the large depreciations of 2002–03, the second model used the actual values of the parallel market exchange rate and the estimated parameters from the VAR to produce the CPI counterfactual. The third counterfactual was produced using the estimated VAR parameters and the actual values of all the other variables in the system.

16. The unconditional forecast produced a CPI inflation rate that is 2 to 3 percentage points higher than the one recorded during 2001–03 (Figure 3). However, this model cannot replicate the sharp increase in the inflation rate that followed the release of the new CPI. This forecast converges with the actual CPI by end–2004.

18. Compared to the first two counterfactuals, the third CPI forecast predicted a lower inflation rate during 2001–02, and a higher rate during 2003–04. This is most likely due to the influence of the lagged values of the actual WPI that were used to produce the forecasts. This third counterfactual CPI would have been about 4 percentage points higher than the actual CPI by end–2004.

19. All considered, the results from this exercise are broadly supportive of the hypothesis that Egypt’s CPI underestimated the underlying level of, and changes in, the CPI during 200 1–03. The forecasts obtained with the three models suggest that, in the initial stages of the transition to a flexible exchange rate, the dynamic relationships embedded in a VAR estimated with data for the 1995–2000 period were not operating fully. The new CPI index released in 2004, as well as price adjustments in some administered items, have helped to partially offset this compression of markups.

21. The large differences in the reaction of the WPI and the CPI point to structural problems with the CPI, which may have resulted in a temporary compression of price markups. Forecasts of the CPI produced in a counterfactual exercise suggest that CPI inflation in Egypt might have been higher in the 2001–03 period, if the dynamic relationships that existed in earlier periods had been maintained.

Prepared by Pau Rabanal. The author would like to thank the Monetary Policy Unit of the Central Bank of Egypt (CBE) for useful comments on an earlier version of this paper.

The new series was released in January 2004, with the initial observation going back to July 2003. A further backward revision with the new weights has not been produced.

The main advantage of this methodology over single–equation regressions or cumulative pass–through calculations is that it takes into account the influence of other macroeconomic variables (e.g., supply shocks, the cyclical position of the economy, the effects of commodity prices) on the price level. One potential shortcoming is that the model is linear: it assumes that large and small exchange–rate shocks (in either direction) have the same proportional effect on prices. The methodology is also not well equipped to deal with parameter instability, a likely consequence of changes in the exchange rate regime, or with very short sample periods.

See Appendix I.1 for a brief description of the VAR methodology and other details of the estimation.

The estimations do not take into account possible changes in the monetary policy and exchange–rate regime. Belaisch (2003) and Kara, et. al (2005) investigate this possibility for the cases of Brazil and Turkey, and find evidence of a decline in the pass–through coefficients in both countries in recent years.

The pass–through at horizon j is defined as PTt,t+j = PTt,t+j/Et,t+j, where Pt,t+j is the cumulative response of the price level j periods after the shock, and Et,t+j is the cumulative response of the nominal exchange rate. For example, if six months after the shock, the nominal exchange rate has depreciated by 3 percent and the price level has increased by 2 percent, the pass–through level would be 66.6 percent.

The results for Brazil, South Africa, and Turkey are similar to those obtained in the studies cited in footnote 4. The VAR included the producer price index (PPI) in the four countries where it is available (the Czech Republic, Mexico, Poland, and South Africa). In the other three countries (Brazil, Israel, and Turkey), the VAR was estimated with the WPI instead.

The behavior of CPI and WPI inflation during 2003–04 presented an additional complication for the choice of the sample period. Because these series exhibited low and stable values between 1999–2003, and started rising afterwards, a VAR estimated with a starting date in 1999 or 2000 delivered unstable roots. Hence, more observations from the past, when both inflation and the exchange rate were stable, had to be added to make the system stationary.

Roughly one third to one half of the items in the CPI series that was used until July 2003 is believed to have consisted of goods with administered prices, including food items, utilities, transportation, and rent.

The two series of commodity prices used in those estimations were obtained from the IMF Research Department.

Additional robustness checks (not reported in Table 3) included: starting the sample period in 1997, introducing M2 in domestic currency (M2D) in the system, or changing the ordering of the variables. The results did not change significantly with any of these changes.

This proxy is often used in empirical work for Egypt; see, for example, Hassan (2004). 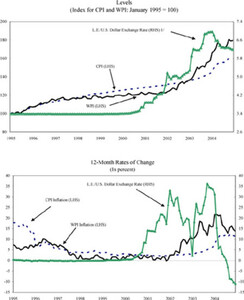 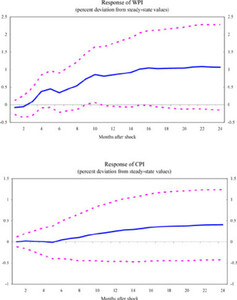 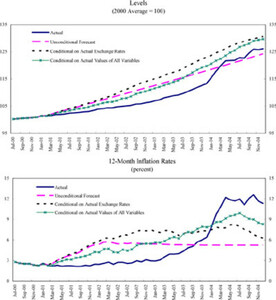