III. How to Keep Living Standards in New Zealand Rising as the Population Ages?22

1. Population aging poses a number of challenges to New Zealand’s economy. As the population ages, there will be relatively fewer people available for the production of goods and services, potentially reducing the rate of growth of GDP per person (Figure III.1). An aging population will also increase government expenditure on pensions and healthcare (see, e.g., Creedy and Scobie, 2005), and the demographic shift might also affect savings and investment. While New Zealand’s demographic profile may be more favorable than most developed economies (Figures III.2 and III.3), the country faces the twin challenge of dealing with an aging population and of closing the GDP per capita gap with the rest of the OECD.

2. Using a Cobb-Douglas production function, the GDP per capita of a country is given by:

The above equation summarizes the determinants of GDP per capita, and various versions of this equation have been used to simulate the impact of population aging on GDP per capita (e.g., Cheng, 2003).

3. This chapter argues that strong GDP growth would help manage the challenge posed by population aging. Productivity and the various components of labor input (working age population, labor participation, unemployment, and the average hours worked per person in employment) determine a country’s living standards. This chapter studies these determinants as population ages, and reaches the following conclusions:

4. The rest of the chapter studies each determinant of a country’s living standards, and discusses ways to improve it as population ages. The next section discusses productivity.

5. Productivity is a key determinant of a country’s GDP per capita. Boosting productivity could therefore play a central role in handling the aging challenge.

7. Aging might affect productivity through its impact on capital deepening and total factor productivity, but the net impact is unclear.

8. Increasing labor input increases a country’s GDP. Labor input is a function of four components: labor participation (the share of the working age population that are in the labor force); unemployment; the average hours worked per person in employment; and the working age population. Improvement in any of these components would raise GDP. People might decide to work less as the country grows richer, however. To keep labor input high, the focus would have to be on identifying impediments that prevent people from working more when they wish to do so.

9. New Zealand’s overall participation rate is high, but there may be impediments to participating for some categories of workers.

10. Unemployment in New Zealand is low, but could be even lower among young people. The unemployment rate in New Zealand, at under 4 percent, is the lowest in the OECD. However, unemployment for both males and females below 30 is significantly higher than the national average (Figures III.10 and III.11). Here again, education (including vocational training) could play a role in supplying young people with the skills they need to enter the workforce.

11. Average annual hours worked per person in employment are high in New Zealand (Figure III.12), but might decline in the future to the extent that leisure is a normal good. Such pressure already materialized recently, when the country decided to shift from 3 to 4 weeks of paid leave under the Holidays Act 2004. As New Zealand catches up with the richest countries, some people might choose to work even fewer hours. This will make giving people who want to work longer hours the opportunity to do so even more important if the country is to maintain high growth rates.

12. The effective retirement age could increase as gains in life expectancy continue. Life expectancy has risen significantly in recent years (in 2001, life expectancy at age 65 was about 18 years for men and 22 for women, against about 13 and 17 respectively in the early 1960s). Life expectancy is expected to further increase by several years in the decades to come (Bryant, 2003). As workers become healthier at a given age, some might consider retiring later. New Zealand’s current pension system does not deter later retirement, as the net pension payment does not decline if a person has other income.

13. Immigration is unlikely to increase the share of working age population much. While migrants tend to be younger than existing population, higher immigration will probably not have a large impact on the country’s age structure. First, many migrants also belong to older age groups. And second, those who do not, will eventually age. Immigration therefore changes the size of a country’s population rather than its structure (Bryant 2003, United Nations 2000). As a consequence, immigration does not seem very helpful in solving the aging problem.

People Aged 65 and Above

(In percent of total population)

(As a percent of the United States) 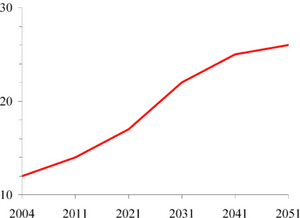 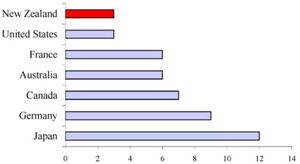 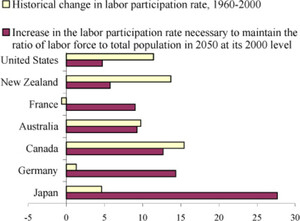 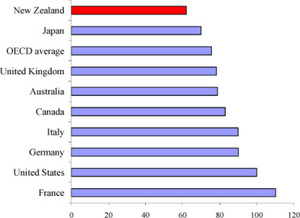 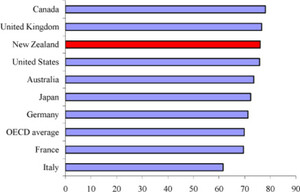 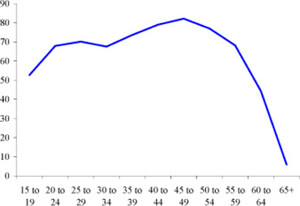 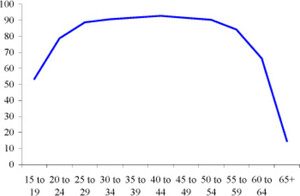 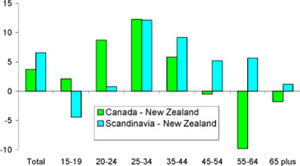 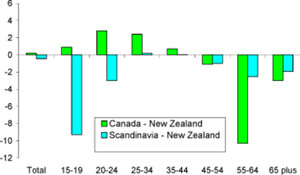 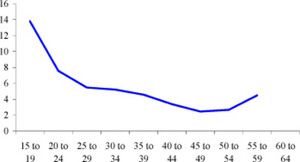 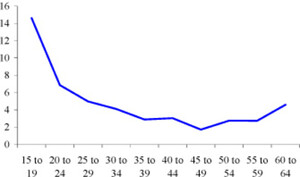 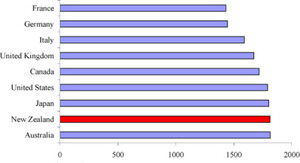