I. How does International Migration Affect Unemployment in New Zealand?1

2. Migration has had an important influence on New Zealand’s economy. Migration affects both demand and supply. On the demand side, the swings in migration flows contributed to business cycle developments in the economy during the 1990s.3 Figure I.3 illustrates how real exchange rate changes (measured as the differences between non-tradable goods inflation and tradable goods inflation) tend to follow the movements of net immigration flows. The positive relationship of the two series suggests that immigrants are associated with an increase in domestic demand. The housing sector is one prominent demand component affected by immigration, with immigrants helping to fuel the housing boom since the mid-1990s (Figure I.4). Opinions about the impacts of migration on the supply side are more complex. While some suggest that immigrants may “invade” local jobs, others view immigrants more positively as a welcome offset to the “brain drain” resulting from New Zealanders’ emigration and a driver of the country’s long-term growth and job prospects (New Zealand Department of Labor, 2004).

B. Migration and Unemployment—Economic Links and Empirical Model

5. The interest in the impact of migration on the unemployment rate is two fold. First, an estimate of the impact of migration on the labor market of New Zealand can be used to assess whether and to what extent an anticipated decrease in the net inflow of migrants will lead to an increase or decrease in the unemployment rate. Second, it may aid the understanding of the extent to which migration could affect the gap between unemployment and its natural rate, and thus result in inflationary pressures (along the “Phillips Curve”).4

6. The effect of migration on unemployment is ambiguous from a theoretical perspective. On the one hand, immigrants may reduce unemployment through complementing existing jobs and stimulating job creation, or if the demand of the immigrants for goods and services generate more jobs than they themselves occupy. Moreover, to the extent that some immigrants come as investors, they also generate investment demand. On the other hand, immigrants may increase unemployment if they compete and substitute for existing workers, or find it hard to get suitable jobs

7. The empirical literature considering the impact of migration on the job market has produced mixed results. Most work has used a cross-sectional approach to measure the impact of immigration across different regions in a country, with particular attention paid to the effect of the immigrants on the labor market outcomes of native-born workers. The results have typically pointed to a small effect on the wage and employment of native-born workers.5 Work on New Zealand has largely focused on the labor market performance of immigrants. In particular, Winkelmann and Winkelmann (1998) concluded that the labor market performance of immigrants is related to their educational qualifications, years in New Zealand, and regions of origin. Among the work using time-series data is a study on Australia by Pope and Withers (1993), who examined the impact of migrants over a long sample and found that more immigrants did not lead to higher unemployment. In the case of France, Gross (1999) found that immigrants tended to increase unemployment slightly in the short-run, although there was a reduction in the unemployment rate in the long run.

8. This chapter estimates a system of equations including the unemployment rate, real wage, net migration rate, and labor force participation rate, taking into account the inter-dependence of the variables. The model is similar to that of Pope and Wither (1993) and Gross (1999). The net migration rate is defined as the ratio of net permanent and long-term migration inflows to the total labor force. The impact of migration on unemployment is a combination of demand side factors (increased aggregate demand from the consumption and investment of the migrants, and consequently demand for labor) and supply side factors (impact on the labor supply and the real wage). Migrants themselves may be driven by domestic economic conditions, such as the unemployment rate and the real wage (pull factors), and affected by exogenous events such as the labor market conditions or perceived security situation in other countries (push factors). Annex I lays out the empirical model that enables an exploration of the interaction and joint behavior of migration and labor-market indicators. Annex II discusses definitions of the variables and sources of the data

9. The potential impact of the composition of the migrants are further considered, with particular attention on their country origins/destinations and their skill levels.

11. Moreover, while the impacts of migrants to and from Australia and migrants to and from other countries are similar in signs, the impact of the former is much stronger. Assuming that migrants from different geographic location have a similar demand impact, the stronger response of the labor market variables to migration with Australia suggests that immigrants from non-Australian countries are less successful in finding jobs than those who migrate to and from Australia.6

12. A higher share of skilled workers in net migration inflows is not found to have an additional impact on the unemployment rate. Despite the shortages of skilled labor often cited by employers, skilled migrants do not appear to have greater success finding jobs than their unskilled counterparts. This might be explained by the observation that many skilled immigrants may have been inhibited in their job search by factors such as their language skills, or by direct or indirect discriminations by employers.7 However, an important caveat applies to the occupation based skill index, as a significant proportion of migrants do not register their occupations (Annex III).

13. Econometric results suggest that the fluctuating migration flows to New Zealand indeed “amplify” the cyclical position of the economy, highlighting the need for careful demand management by policy makers to take into account the projected trend of international migration. In this regard, the recent change in the immigration policy is helpful as it may facilitate smoother inflows and “dampen” the fluctuations.8 The results also show that migration inflows have a positive impact on the job market overall, as it helps to raise the labor force participation rate and reduce unemployment. However, despite the high share of skilled workers in the net inflows, foreigners (other than those from Australia) tend to have more difficulties finding jobs than New Zealanders, underlining the importance of the efforts currently underway to enhance the job market integration of immigrants.9

14. The slowdown in the net migration inflows projected for the coming years is expected to contribute to a rise in the unemployment rate and subsiding inflationary pressure. The Reserve Bank of New Zealand projects that annual net migration inflows will slow by about 50 percent during the year to the September quarter 2005 (Reserve Bank of New Zealand (2004)). The model estimated here suggests that a 50 percent reduction in net migration could lead to an ⅛ percentage point rise in the unemployment rate in the first year and nearly a ½ percentage point rise over two years.

As a result, New Zealand has a higher share of foreign-born population than most other countries, as well as one of the largest shares of people living overseas. See OECD (2002) and Bryant and Law (2004).

A recent OECD country survey (2004) postulated that migration flows themselves might generate some cyclical “amplification” effect as migrants create more demand than supply in the short-term. The survey, however, did not find such a link in simple correlations between broad cyclical indicators and migration flows.

Those going to Australia are probably representative of the remaining population, as suggested by Glass and Choy (2001). They argued that the common labor market with Australia has allowed the migration of a broad mix of New Zealanders who might otherwise has been screened out by selective immigration policies.

A survey by the Department of Labor of New Zealand (1998) concluded that many highly qualified and experienced migrants from Asian countries and the countries in the Former Soviet Union (FSU) were either unemployed or underemployed.

People seeking to migrate to New Zealand now make an expression of interest (EOI) rather than a direct application. The government then invites the potential immigrants to apply, giving more capacity to smooth inflows over time. However, these policies do not affect outflows of migrants, which account for a large part of the fluctuations in net migration. See OECD (2004) and New Zealand Department of Labor (2005).

Other exogenous variables considered include the real growth of Australia, trade weighted real growth of all foreign countries, and terms of trade. None of these variables was found to be significant.

One caveat about the data is the large number of “not actively engaged” or “not specified” responses. More details are in Glass and Choy (2001). Nevertheless, these are the only continuous series that could shed light on the skill composition of the migrants.

Skilled workers include legislators, administrators and managers, professionals, technicians and associate professionals; unskilled workers include other professions such as clerks, service and sale workers, agriculture and fishery workers, plant and machine operators and assemblers, trader workers, and laborers and related elementary services. Similar classification was used by Glass and Choy (2001), which further split the unskilled category into semi-skilled and low-skilled.

(in percent of total population)

Net migration from Australia and other countries

(in percent of labor force)

Accumulated Impulse Response to 1 Percentage Point Increase In Net Migration Rate From All Countries, Australia, and Other Countries 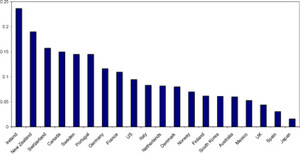 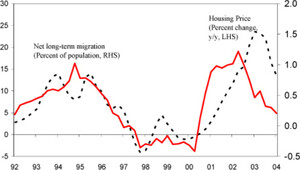 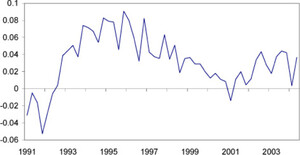 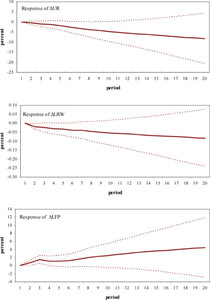 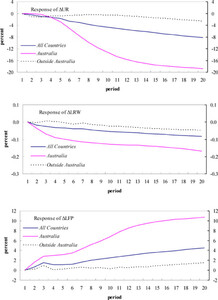