25. The Trinidadian dollar has remained broadly stable vis-à-vis the U.S. dollar over the last decade. After a significant devaluation in April 1993, the Trinidadian dollar only depreciated by some 10 percent through 1997 in nominal terms, and has remained within a narrow band at around 6.3 TT$ per US$ since. However, Trinidad and Tobago’s real effective exchange rate (REER) indicators suggest that external competitiveness has deteriorated over time. Figure 1 shows the multilateral REER as calculated by the IMF and the CBTT10 and the bilateral REER with its major trading partner, the United States, based on consumer prices, and in the figure below the same set of indicators using producer prices. All indicators point to a real appreciation of the Trinidadian dollar. Even though the indices show some reversal in recent years—reflecting the depreciation of the euro against the U.S. dollar—the IMF and authorities’ CPI-based REERs still remain some 12 and 16 percent above the 1997 level, respectively.

27. However, real appreciation of the Trinidad and Tobago currency was accompanied by an upward shift in the equilibrium REER (EREER), reflecting a strengthening in the fundamentals. This is supported by some stylized facts, in particular the increase in oil prices, which have added to the country’s wealth. We estimate an econometric model following Edwards (1994) to assess the real exchange rate relative to its equilibrium level. The model of the equilibrium real exchange rate (EREER) includes as determinants oil prices (OIL), productivity differentials (PROD) and the real interest rate differential with the United States (INTEREST). Given that all the variables are I(1), we use the Johanson procedure to estimate the long-run cointegrating relationship between the variables.11

The EREER is then simulated using the estimated coefficients and the trend components of the fundamentals (computed with the Hodrick-Prescott Filter). The results suggest that the EREER has been steadily appreciating over the last decade, and that the REER is still below its long-term equilibrium rate, i.e., the currency remains undervalued, pointing toward further pressures to appreciate.

28. Unit labor costs (ULC) in manufacturing (relative to the United States) have fallen markedly over the last years despite notable wage increases, suggesting an improvement in competitiveness. A decomposition of the index by contributing factors indicates that this largely reflects an increase in productivity, while at the same time real wages have increased and at a faster rate than in the United States.

29. However, this indicator does not take account of changes in unit capital costs. It only captures the relative costs of one production factor, i.e., labor. Changes in the prices of intermediate and capital goods that change competitiveness are not covered. Most importantly, if there is a substitution from labor to capital as a share of inputs, one would conclude that labor competitiveness has increased, while overall competitiveness may not have risen as the increase in unit capital costs is not captured.

30. Therefore, the ULC indicator has to be treated with particular caution in the context of Trinidad and Tobago’s economic structure. Economic developments are mainly driven by the oil and gas sectors, which are highly capital intensive, and therefore overall competitiveness is mainly impacted by the developments of unit capital costs. Since the manufacturing sector also includes some very high capital intensive energy-related upstream production, and has undergone significant structural changes over the last few years through large capital investment, capital costs are expected to have increased.

31. In fact, producer prices for basic commodities suggest that overall production costs have increased. For example, in the food, beverage, and wood industries production costs increased substantially during the period 1996–2003.

32. Growth in exports of non-energy commodities and services over the last years has been modest, and exports even declined in 2003. While non-energy exports modestly increased through 2002, they dropped in 2003 by some 8 percent, and across all categories. Mostly affected were manufactured goods (excluding steel), which declined by a cumulative 25 percent since 2001. Growth in exports of services during 1996–2002 was disappointing as well, and was negative by some 3 percent in 2003. At the same time, oil export growth has accelerated significantly. With new production facilities coming on stream, energy exports increased by some 45 percent in 2003, and are projected to increase by a further 35 percent in 2004.

34. The Global Competitiveness Report ranks Trinidad and Tobago as an average performer in 2003, and has recently downgraded it (Table 1). While Trinidad and Tobago has outperformed other countries in the CARICOM region or of the FTAA, its competitiveness ranking (47) is significantly lower than either of its major trading partners, the United States and the United Kingdom. Also, Trinidad and Tobago has fallen in ranking across all indicators over the last two years—partly as a result of the emergence of new growth economies—which points to the need to make continuous improvements in order not to fall behind vis-à-vis other countries.

Ranking of 80 countries with 1 as the highest ranking.

Ranking of 80 countries with 1 as the highest ranking.

35. The real exchange rate and an ineffective use of public funds are identified as among the main competitive disadvantages of Trinidad and Tobago’s macroeconomic environment (Table 2). Low scores were awarded for real exchange rate developments, governance issues, the large allocation of public funds to subsidies and public enterprises, and high bank spreads. Macroeconomic factors contributing positively toward competitiveness were the country’s favorable prospects for growth, access to financing, and the strong fiscal position. It should be noted that the positive factors are spillovers from the energy boom, whereas the negative factors are of a structural nature. On other indicators, Trinidad and Tobago performs highest in technology, reflecting the spillovers from the energy sector. Nevertheless, its overall ranking in technology is not very high, reflecting strong reliance on FDI, low enrolment in tertiary education, and low research and development activity.

36. The appropriate policy mix depends on Trinidad and Tobago’s social preferences, institutional factors, its economic structures, and the external environment. This section looks at various macroeconomic and structural policy options at hand to improve competitiveness. It discusses how they have been employed in the past, and their relative importance and potential effectiveness in addressing competitiveness issues in Trinidad and Tobago.

37. The effectiveness of a devaluation on competitiveness depends on the exchange rate pass-through to domestic prices. Whereas a change in the nominal rate has an immediate impact on competitiveness as it changes the relatives prices of tradables and nontradables, its long-lasting impact depends on the pass-through of the exchange rate on prices. This is likely to be higher the larger the share of imported goods in domestic consumption (McCarthy, 2000), the smaller the size of the economy since the country will be a price-taker in international markets (Kent, 1995), and the lower the level of competition in the domestic market, since there will be more room to pass on price increases. If the pass-through coefficient is very high, a depreciation of the exchange rate will not have much impact on competitiveness beyond the short term.

38. Some stylized facts point at a high pass-through. Trinidad and Tobago is a very small, open economy with a ratio of imports and exports to GDP of 90 percent, and imports to domestic consumption of 55 percent. This implies that the domestic producers are price-takers in international markets. Most importantly, strong labor unions are unlikely to accept a sustained fall in real wages.

40. The increasing openness of the Trinidadian economy gives rise to an increasing preference for maintaining a stable exchange rate. However, nominal exchange rate stability may hurt competitiveness over the medium term if domestic prices rise above international levels. This would put pressures on the real exchange rate and constrain the growth and employment potential. Indeed, in the period 1998–2003, CPI inflation in Trinidad and Tobago was persistently above that in the United States, causing a real appreciation against the U.S. dollar of some 14 percent.

42. However, over the last decade, fiscal policy in Trinidad and Tobago has been procyclical. The relationship between expenditures and revenues has been strongly positive (correlation coefficient of 0.82), with expenditures following closely the revenues available. This trend has even been more pronounced since 1999 (correlation coefficient of 0.93). High volatility in energy revenues (standard deviation of 2.7) was translated into a high volatility of expenditure (standard deviation of 2.2).

43. Appropriate fiscal rules and procedures supported by a well designed revenue stabilization fund could be key in minimizing Dutch disease effects. A key policy requirement is prudent fiscal management that allows for fiscal surpluses during times of large energy-related revenues. The revenue stabilization—under its current design fund—envisages setting aside resources when the oil revenues are above budgeted amounts,13 which would be used to build up assets abroad. To be effective, however, this requires that the budget is drawn up on assumed energy revenue inflows that are consistent with containing expenditure on non-tradables and avoiding an overheating of the economy.

44. The government has identified a broad-based medium-term structural reform agenda that aims at improving the long-term fundamentals of the economy and reducing the costs of doing business. Recent policy initiatives by the government cover:

45. External competitiveness in the non-energy sector in Trinidad and Tobago has deteriorated over the recent past and is a concern going forward, particularly in the context of the continuing energy boom. Various indicators of external competitiveness have been examined, including the real effective exchange rate, unit labor costs, and survey based indicators. While the analysis of the REER suggests that it has remained in line with its fundamentals, and unit labor costs have been declining relative to the United States, declining non-energy exports, high capital costs, and wage pressures suggest that competitiveness has been adversely affected. In view of the upward pressure on the real exchange rate from large energy-related inflows, determined pursuit of structural reforms, especially of the labor market, will be critical to promote employment and non-energy sector growth.

Eighty seven percent of the total labor force work in the non-energy sector, 3 percent in the energy sector, and the remaining 10 percent are unemployed.

This is calculated as a geometric average of bilateral exchange rates and consumer prices inflation between the Trinidad and Tobago dollar and other currencies, weighted by non-energy merchandise export shares with 1990 as base year.

The data set covers the period 1990–2003 and is based on quarterly observations.

The variables used are the exchange rate of the Trinidad and Tobago dollar to the U.S. dollar, domestic consumer prices, and the production index as a proxy for aggregate demand. The data are quarterly and the sample period covers 1994–2003. The results were not sensitive to the ordering of the variables.

The current rules stipulate that deposits and withdrawals to the Revenue Stabilization Fund (RSF) are to be made when quarterly energy tax revenues and royalties exceed or fall below the quarterly revenues anticipated in the budget by 10 percent of more. Deposits should be at least 67 percent of the difference between realized and budgeted revenues, and withdrawals are to be equal to the lesser of: (i) the petroleum taxation deviation for the quarter/year under reference; and (ii) 25 percent of the balance of the RSF at the beginning of the quarter/year.

Non-energy Exports of Goods and Services

Pass-through of Shock to the Exchange Rate

(Nominal change in millions of TT$) 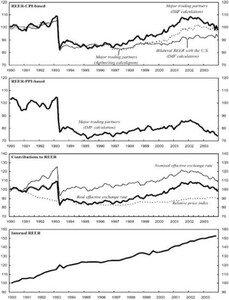 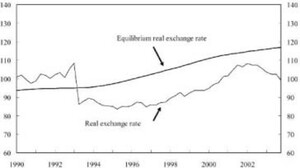 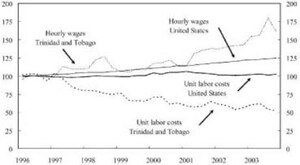 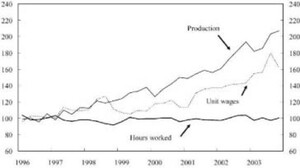 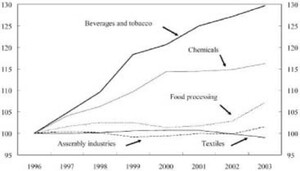 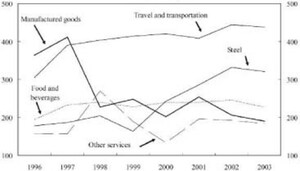 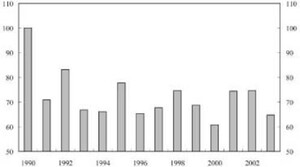 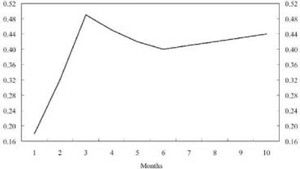 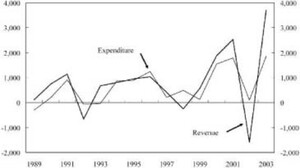