14. Trinidad and Tobago has experienced 10 consecutive years of solid economic growth, driven mainly by the energy sector. While the unemployment rate has fallen from a high of 18.4 percent in 1994 to 10.5 percent in 2003, the rate has hovered around 10 percent over the last three years. The problem remains therefore how to stimulate growth in the sluggish non-energy sector and in particular, to create sufficient sustainable employment.

16. Movements in the participation rate reflect both cyclical and structural influences. Theoretically, the participation rate has a strong positive relationship with cyclical employment opportunities, usually called the ‘encouraged worker’ effect. The participation rate is also affected by social and cultural trends such as the changing age structure of the population and the social acceptance of women with children who work; the latter factor has resulted in increased female participation rates. In Trinidad and Tobago, the rate of growth in both the female labor force and female employment has exceeded that of their male counterparts in all but two years in the period under review.

Impact of the minimum wage

17. The impact of the introduction of a minimum wage of TT$7 per hour in 1998, and its subsequent increase to TT$8 in 2001 is hard to assess, given other important changes in the labor market. The minimum wage was directed mainly at providing a safety net for vulnerable workers services sector—for example, domestic workers, store clerks, etc. While the private sector expressed concern that the minimum wage would have an adverse impact on employment, it coincided with offsetting factors, notably the construction phase of two ammonia plants and Atlantic LNG Train 1. Indeed, employment generation reached a peak (at 19,500 jobs) following the introduction of the minimum wage (Table 1). In these circumstances, it is difficult to isolate the impact of the minimum wage on employment.

This is considered the most appropriate measure of unemployment for Trinidad and Tobago. It includes as unemployed persons who looked for work up to three months preceding the week of the survey.

This is considered the most appropriate measure of unemployment for Trinidad and Tobago. It includes as unemployed persons who looked for work up to three months preceding the week of the survey.

18. The Community Environment Protection and Enhancement Program (CEPEP) was launched in October 2002. In the first phase of the program, 4,900 persons were employed in 110 companies. The latest data indicate that the number of people employed by the program has increased by 1,100. The employment generated by CEPEP is captured in the community, social, and personal services category of the quarterly employment survey. A close examination of this group shows that the increase of 5,200 in 2003 in the number of jobs created has been the largest in the past 11 years (Figure 2). The program has contributed positively to employment generation especially among the female, middle-aged workers with limited years of schooling.

Impact of the closure of the sugar company

19. The closure of CARONI in 2003 did not have a significant impact on the overall rate of unemployment. For the 9,000 workers which accepted the voluntary separation of employment package, the following occurred:

20. While statistics show that employment in the sugar sector fell by 8,800 between the second and third quarters of 2003, the total number of unemployed persons rose by only 3,700. Discounting increases in the labor force, this would indicate that sufficient employment was generated in other sectors to compensate for the many of the job losses in the sugar sector.

21. In Trinidad and Tobago, wages are determined primarily by the collective bargaining process. Table 2 shows that entry wages have lagged behind inflation, but industrial wages have generally increased in real terms and have grown particularly rapidly in the past three years. Average wage increases outside the energy sector have also been rising. The genesis of these increases has been the 15 percent awarded to public servants for a three-year period in 2003, which has served as a benchmark for wage negotiations in other sectors. While demand is outstripping supply in sectors such as finance and energy, the reverse is occurring in industries utilizing low/semi-skilled workers. Data from the Central Statistical Office reveals that approximately 45 percent of the workforce has either elementary or secondary education. If the trend in wage increases continues, especially if the increases are not justified by increases in productivity, then some sectors may lose their competitive edge. This can have a deleterious effect on future employment generation opportunities.

22. With the unemployment rate hovering around 10 percent, the government has been attempting to correct a deficiency in the availability of skilled labor through increasing expenditure on education and training. Some initiatives include: the new University of Trinidad and Tobago and other short/medium term programs to train youth in areas which may lead to sustainable employment. However, since the problem is one of a structural nature, one should not expect any significant downward movement in the unemployment rate in the near term, especially given the recent trend of rising participation rates.

23. The high unemployment rate in Trinidad and Tobago reflects both an increase in the participation rate and structural issues that have limited job creation. These include skills mismatches in the context of an increasingly knowledge-based growth, the capital-intensity of the energy sector, and wage pressures associated with large energy-related revenue inflows. While there have been positive developments over the last few years, particularly in the area of training and education, their impact on employment has been largely offset by job losses in the sugar sector, and possibly by an adverse impact of the minimum wage. The structural nature of the unemployment problem reinforces the need to focus on competitiveness-enhancing reforms in the labor-intensive sectors. In this context, it is important to design a reform agenda to enhance labor market flexibility.

Prepared by Saqib Rizavi (WHD), based on a paper produced by the Central Bank of Trinidad and Tobago.

The NIP is the working age population, that is, those persons who are over the age of 15 and under the age of normal retirement. 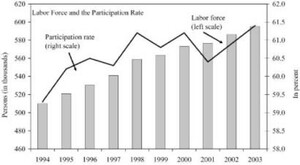 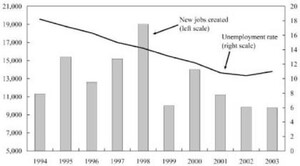