III. Disability Support Pension in Australia and the Netherlands25

73. Increasing labor force participation is at the center of the government’s strategy for promoting growth and easing fiscal pressures associated with an ageing population. Incentives to work are affected by various elements of the income support system such as the maximum rates of payments, the maximum level of income and assets that allows individuals to qualify, and eligibility criteria attached to payments and obligations (such as requirements to look for work). Ensuring that the income support system provides an adequate and well-targeted safety net without discouraging work requires careful balance.

(In percentage of GDP)

Various definitions of disability benefits are as follows:

(In percentage of GDP)

Various definitions of disability benefits are as follows:

B. The Disability Support System in Australia and the Netherlands

75. The Australian DSP scheme is essentially based on medical disability or a test of whether people are able to work full time at full-award wages. Those who are permanently blind or have a permanent impairment qualify for the DSP on medical grounds. To meet the second criterion, a physician must certify that the person has a continuing inability to work, or to be re-trained within two years. Currently, qualification for the DSP is not subject to a work reintegration test, it is not taxable, and has more generous income and asset tests than some other benefit transfers.26 For those aged 55 years and over, local labor market conditions are taken into account in determining their qualification for DSP.

76. The two most common medical conditions for people receiving DSP are muscular-skeletal (just under a third) and psychological or psychiatric (around one fifth). People aged between 45 and 65 represent two-thirds of the DSP population. Around one fifth of DSP recipients have been on the payment for more than ten years. The majority of recipients remain on pension for life and only 8 percent have income from earnings. Australia now has one of the lowest rates of employment for disability recipients.27 Some have argued that the DSP system discourages work participation. To ensure that DSP remains the appropriate income support payment only for those with little or no capacity for paid work, the government proposed two changes to tighten its eligibility requirements as part of the 20002/03 Budget: The proposal makes to the DSP qualification criteria:

The proposal have not passed the Senate.

77. There are different types of assistance programs available to help people with disabilities participate in the workforce. These include rehabilitation services; help to find work through specialist disability employment services; and incentive programs for employers to hire people with disabilities. Participation in these is voluntary. However, only a relatively small number of people on DSP has taken advantage of these services. As a consequence, the outflows from DSP have been relatively small leading to a sharp increase in people on the DSP since 1990.

The Reform of the Dutch Disability Support System

78. Like Australia, the Netherlands has had large inflows of disability benefit recipients. During the 1970s and 1980s, the Dutch disability scheme was used by employers as a convenient way to lay-off workers with relatively mild consequences for the member’s incomes. Consequently, while unemployment rates dropped, the number of disabled rose, reaching almost one million in the late 1990s, or about 13 percent of the labor force. The outlays of the program amount to about 2.7 percent of GDP in 1999 (or 4.6 percent when including sickness benefits, which are paid by the employer, and other related costs), which is very high by international standards (cf. Table 2).

79. The problems with the scheme have been long acknowledged and various reforms have taken place over the years, with major reforms in 1985 and 1993. While reducing the generosity and cost of the scheme, the reforms did not succeed in a durable reduction of inflows. In 2001, an expert committee (the Donner Committee) issued recommendations for a further comprehensive reform of the system, which were subsequently discussed and modified in the Social Economic Council (SER), the advisory body comprising the social partners. The SER proposal of 2002, which is broadly the basis for the current reform plan, includes:

80. While the following table compares the reform proposals of the disability support systems in Australia and in the Netherlands:

81. This comparison suggests that the Australian DSP scheme may need further reform to establish its sustainability. In particular, the proposed reform on the Australian eligibility requirements—the reduction in the continuing inability to work test from 30 to 15 hours a week and the shift from local to overall market conditions in determining whether a person has a continuing inability to work—appear to be less stringent than the proposed eligibility requirement for the Netherlands where the disability support scheme is restricted to only the fully and permanently disabled.

82. In 2003, the new inflows into the Dutch disability scheme dropped by 28 percent to 66 thousand for the first time in seven years. Part of the decline is due to institutional improvements. First, a law on improved gate-keeping came into force in April 2002, introducing stricter mutual obligations on reintegration efforts for employees on long-term sickness benefit and their employers. Second, the five public debility benefit agencies were merged into a single one in January 2002, reducing the influence of sector interests on the disability benefit authority. Third, the effect of experience-rating in insurance premiums at the firm level, introduced in 1998, grew stronger as premiums became more and more differentiated for medium-size and large firms. However, part of the decline may have been cyclical. A cooling labor market usually leads to lower sickness numbers as employees fear losing their jobs. Moreover, the decline in inflow numbers may also reflect public debates on the disability problem. In any event, the inflow in 2003 remains well above the target of 25 thousand persons by 2006, after the implementation of the new reform initiatives.

83. As highlighted in a recent OECD report, the disability support systems in industrial countries should move away from a compensation policy to an integration policy approach.29 A compensation policy approach stresses benefit payments as opposed to economic integration. Such an approach generates high recipiency rates and low levels of employment: as shown in the figure, the disability benefit recipiency rate is positively and highly correlated with the coverage and generosity of benefits. Alternatively, an integration policy encourages employment by emphasizing work incentives for partially disable individuals, providing incentives for firms to hire disable workers, and by tightening eligibility criteria for disability support programs.

Hon Jocelyn Newman (2003), “The Challenge of Welfare Dependency in the 21st Century,” Discussion Paper, Ministry for Family and Community Services.

Hon Jocelyn Newman (2003), “The Challenge of Welfare Dependency in the 21st Century,” Discussion Paper, Ministry for Family and Community Services.

In many collective labor agreements, top-ups of sickness benefits up to 100 percent of the wage have been negotiated. 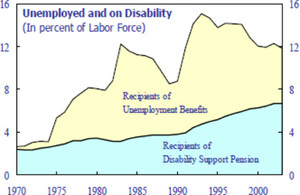 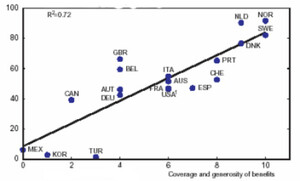