1. This chapter presents estimates of the structural budget balance. These are necessary for the purpose of assessing the fiscal policy stance, as the actual budget balance is distorted by the influences from cyclical movements of output. This study is also conducted against the background of the accession of Latvia into the European Union (EU), since the structural budget balance, as well as the potential output, is featured in the EU macroeconomic surveillance procedures and has acquired “operational” status in the Stability and Growth Pact.

2. The structural budget balance analysis addresses the question: What would the budget balance be if output were at its potential level? Answering this question thus involves estimating the potential output as the preliminary step in the analysis.

3. The potential output is the level of output that could be obtained if the economy were operating at normal capacity. There are two general approaches to measuring the potential output. The standard approach used by the EC and a number of IMF country teams (especially for transition economies and developing countries) has been statistical detrending, for example, fitting a stochastic trend to the output data using the Hodrick-Prescott (HP) filter. This is the only feasible method for countries with insufficient data to attempt more sophisticated procedures. But being a pure statistical approach, its link with the economic concepts of potential output and business cycle is not very clear.2

4. A more theoretically appealing methodology is the production function approach, which involves estimating a production function, such as a Cobb-Douglas function of labor, capital, and technology. This approach is used by IMF country desks for a number of advanced economies, and a recent report by European Policy Committee (2001) has recommended that EU countries adopt this approach. However, the production approach is quite data demanding, requiring estimates of potential capital stock, structural employment, the level of education, and trend growth of total factor productivity (TFP). It is especially challenging to apply this approach to a transition country like Latvia, where reliable data on the capital stock and TFP are not available, and too many assumptions are needed to obtain any results.

5. In this study, we take the stochastic detrending approach to measuring potential output, and apply the HP filter to seasonally adjusted quarterly real GDP series for the period 1995:Q1 to 2005:Q4. Projected 2004 and 2005 data are included to mitigate the end-point problem, i.e., to supply the algorithm with some guidance regarding the persistence of the 2003 GDP. We project real GDP to grow by 6.5 percent in 2004, which reflects the assumption that the higher-than-normal growth observed in 2003 signals a permanent rise in potential output.

6. Figure IV.1 plots the resulting estimates of the output gap, which is the percentage deviation of actual output from its potential level, for 1995–2003. The potential real growth rates and output gaps are also shown in Table IV.1. As can be seen, in 1998 the actual output was above the potential level, but the adverse impact of the Russia crisis depressed output to 1.8 percent below potential in 1999 and 1.2 percent below potential in 2000. In fact, the economy started to recover in 2000, as evidenced by the high growth rate of 6.9 percent. But because of the significant negative output gap in 1999, the output level still did not reach potential in 2000 thus creating a negative output gap. The estimated output gap was slightly positive in 2001, -0.3 percent in 2002, and 0.4 percent in 2003.

Based on estimates of the potential GDP by applying HP filter to the period 1995Q1-2005Q4.

Based on estimates of the potential GDP by applying HP filter to the period 1995Q1-2005Q4.

7. In calculating the structural budget balance, tax revenue needs to be adjusted since it depends directly on the output level. In the IMF’s methodology (see Hagemann, 1999), on the expenditure side only outlays on unemployment benefits are assumed to be sensitive to the cyclical movement of output. Therefore, the structural budget balance can be expressed as follows:

8. In the above, T is tax revenue, Y and Y* are the actual and potential levels of output, G is government expenditure, UB is the unemployment benefit payment, U and U* are the actual and natural rates of unemployment, and T* and G* denote structural revenue and expenditure which are measured at the potential output. ε is the elasticity of tax revenue with respect to income, therefore ε ≡ ΔT/ΔY, and T*/T = (Y*/Y)ε. Expenditure is adjusted by the cyclical component of the unemployment benefit payments.

9. The procedure for adjusting revenues varies in practice. One could adjust total revenue using a single revenue elasticity, or apply different elasticities for each type of tax. The revenue elasticity ε is obtained by the regression logT = c + ε log Y + e using country data, and often followed by judgmental adjustments. Although a unitary elasticity seems to be a reasonable assumption, in reality the elasticity could differ from unity owing to progressive tax rates and tax exemptions. Hageman (1999) estimated revenue elasticities for the euro area countries and some other advanced European countries. They range from 0.70 for the United Kingdom to 1.25 for Spain, with most in the range 0.9 to 1.1. In this study, we estimate the aggregate elasticity to be about 0.82 for Latvia, but we also report several different scenarios, as in Burgess (2001).

10. It is reasonable to expect that different components of taxes (corporate tax, personal income tax, social security tax, value added tax, etc.) may have different elasticities with respect to the output gap. Therefore another approach to calculating the structural revenue is to adjust each revenue component separately. Schmitz (2002) follows this approach. In this study we have also estimated these individual elasticities (Table IV.2), which are found somewhat smaller than those obtained by Schmitz (2002). The individual elasticities range from 0.63 to 1.12, with an estimated aggregate elasticity, as noted above, of 0.82.

11. The resulting estimates for the structural budget balance are presented in Table IV.1 and Figure IV.2. Given the uncertainty surrounding the revenue elasticities, we present three scenarios using the aggregate approach, under the assumptions that the revenue elasticity equals 0.8, 1.0, and 1.2, and we also report the results from the disaggregated approach. All four cases yield similar results, as can be observed from both Figure IV.2 and Table IV.1. As expected, the two sets of results that are the closest are those obtained from the aggregate method assuming a 0.8 elasticity, which is approximately the value of the aggregate elasticity estimated from the data, and the disaggregated method. To adjust the unemployment benefit payments, a path of the natural rate of unemployment needs to be assumed. However, the effects of changing this assumption can be ignored since the proportion of unemployment benefit payments in total expenditure is very small (about 1 percent).

13. Output was close to potential in 2002 and 2003. For these two years, the changes in the actual budget balance are good indicators of the fiscal stance. Fiscal policy loosened somewhat in 2002, with increases in both the actual and structural budget deficits. In 2003, the actual deficit of 1.6 percent of GDP was much below the 3.2 percent that had been budgeted. The reasons are twofold: unexpectedly high revenues and lower-than-budgeted expenditure and net lending. The analysis of potential output suggests that the GDP assumption in the budget was much lower than the potential level, as the budget only assumed a rate of real growth of 5.5 percent, compared to the actual growth of 7.5 percent. It is worth mentioning that neither the authorities nor the Fund had forecast such high growth. Moving to 2004 and 2005, the fiscal deficits are projected to decline by about 0.2 percent each year, which implies the same changes in the structural fiscal deficits given the estimated output gaps.

14. The results reported in this chapter give a clearer picture of the fiscal policy stance than can be seen directly from the actual budget balance. In interpreting these results, however, it should be noted that estimating the structural budget balance for transition economies such as Latvia is a challenging task. Any statistical method for purging business cycle influences requires the researcher to observe the behavior of the economic variables over many cycles. But for transition countries, the time span of the data is typically very short and only a few cycles can be observed. Furthermore, because these countries have been experiencing fundamental and continuous changes in the structure of their economies, it is difficult to define and measure the potential output. For example, estimated trend growth excluding 2003 would have been lower. It is still not clear whether the year 2003 signals a permanent rise in the trend output in Latvia. Inevitably, one has to make assumptions. Adding to the problem are ongoing tax reforms and efforts to improve tax collection, which make it impossible to estimate tax elasticities accurately. Therefore the results presented here need to be interpreted with these caveats in mind. However, with additional data and longer time series, future work should improve the accuracy of the calculations and enable the implementation of the production function approach. 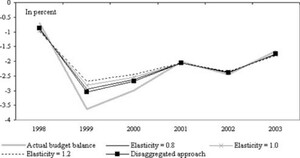