1. The achievement of price stability in the United States has resulted in new challenges and re-opened the debate on how monetary policy should be conducted over the cycle. Particularly against the background of the deflation risks that emerged in 2003, the Federal Reserve has shifted its emphasis from an “opportunistic approach” to reducing inflation to a “risk management” approach, recently endorsed by Federal Reserve Chairman Alan Greenspan.57 More generally, central bankers consistently emphasize that setting monetary policy is a complex process, involving a range of judgmental factors that cannot be condensed into a parametric approach.

2. By contrast, the focus of recent academic work has been on analyzing simple policy rules. This analysis suggests that credible commitments by central banks to a monetary policy rule can generate higher economic welfare in terms of lower inflation and output volatility.58 Moreover, empirical studies have suggested that relatively simple policy rules based on the path of inflation and output provide reasonable descriptions of central bank behavior. In particular, Taylor (1993) and subsequent authors have argued that monetary policy can be approximated by a “rule” in which the Federal Reserve targets a fixed real interest rate, and the federal funds rate responds to deviations of inflation from a desired target and of output from its potential level.

3. The latest cyclical episode has been unusual in the extent to which interest rates have diverged from such a “Taylor rule.” Compared with both the standard rule described above and augmented rules that allow for interest rate smoothing, the Fed eased monetary policy much faster than would have been predicted. As a result, a number of analysts (and Fed officials) have questioned the usefulness of the Taylor rule as a characterization of monetary policy in the United States.

4. This paper seeks to help reconcile the more nuanced characterization of monetary policy espoused by many policymakers with rules typically estimated in academic analysis. In particular, the paper examines a policy rule whose parameters are not constant, with a focus on whether there is evidence that monetary responses vary systematically over the business cycle. Such behavior would be consistent with the notion that policymakers consider more factors than are captured in a typical monetary response regression.

5. To obtain a sense of the overall stability of policy responses over time, a relatively standard Taylor rule is estimated in a manner that allows parameters to change.59 It is assumed that the Federal Funds rate (it) reacts to inflation (πt), output growth (. Δyt), as well as past nominal interest rates (representing the desire by the central bank to smooth interest rate fluctuations). The time-varying intercept (ct) subsumes the real interest rate target, the inflation target, and the steady state growth rate that cannot be estimated separately.60 The specification is:

The parameters are allowed to vary over time and follow “random walks,” in which the current estimate is equal to last period’s estimate plus an unpredictable disturbance. Hence, for example:61

6. The results indicate significant variation in the coefficients on the Taylor rule over time, particularly as regards to responses to the inflation rate (Figure 1).62 The coefficient capturing the long-run response of the federal funds rate to changes in inflation (γπ,t) rose through the early 1980s and then fell, becoming negative in recent years as concerns emerged about the risk of deflation. This shift is consistent with earlier work examining changes in the Taylor rule in the early 1980s. However, the results also suggest that the sensitivity of the policy rule to deviation of inflation from its desired rate decreases during or after recessions, as well as during other periods of stress on the real economy, such as the stock market crash of 1987, the Iraq invasion of Kuwait in 1990, the collapse of Long Term Capital Management in 1998, and the September 11, 2001 terrorist attacks. Inflection points are also seen in the parameters on output growth (γg,t) and interest rate smoothing (ρt), with both exhibiting a tendency to fall during an economic downturn.

B. Letting the Taylor Rule Vary Over the Cycle

7. This section investigates whether monetary policy responds differently during periods of economic expansion and weakness. The first step in testing this hypothesis is to estimate the probability of being in either an expansion or a recession, using the methods developed in Hamilton (1994). In a second step, the coefficients for the Taylor rules in these two states are estimated and compared.

8. More specifically, a switching regime model was estimated, using the path of real output growth to calculate the probability of the economy being in a state of “expansion” or “recession”.63 The results indicate that real GDP growth in expansions averages an annualized 4½ percent compared with- ½ percent in recessions, and point to important asymmetries between these two states (Table 1). If the economy is already in an expansion, the chance of remaining in this state is just above 90 percent, implying an average length of expansions of almost three years. For a recession, the corresponding statistics are around 75 percent and one year. As a result, the economy is expected to be in an expansion about three-quarters of the time.

9. Reassuringly, periods of recession as identified by the NBER coincide with high probability of being in such a situation (Figure 2). The chance of being in a recession varies significantly over periods outside of the NBER recession dates. For example, the probability of still being in a downturn was comparatively high after the official end of the 1990 and 2001 recessions, periods in which the Federal Reserve removed stimulus relatively slowly.

10. The results from estimating separate Taylor rules indicate that there are significant differences in monetary responses during expansions and recessions. Regression results from the Taylor rule specified in equation (1), allowing responses to vary over the cycle using data from 1960, are reported in Table 2.64 The coefficients on inflation and output growth reflect short-term responses of the federal funds rate.65 These are the most relevant coefficients for a policy rule that varies over the cycle, as they reflect the immediate response to cyclical conditions. By contrast, the long-run response also depends on current and future values of the smoothing parameter, and hence the (uncertain) future evolution of the cycle.

11. The results indicate that when the economy is in an expansion, the Fed responds more to inflation, responds less to growth, and smoothes interest rates more. Comparing the pure “expansion” and “recession” responses, the Fed’s short-term response to inflation is about one-and-a-half times as strong in an expansion than in a recession, while its equivalent response to output growth is only one-third as large. In addition, the coefficient on the lagged interest rate is considerably lower during recessions, indicating less concern of policymakers about smoothing interest rates. These coefficients are jointly statistically significant at the 5 percent level, largely due to the shift in the coefficient on output growth. Further tests indicate that these results are robust when it is assumed that the underlying policy rule has shifted over time, including in the early 1970s and 1980s.

12. The implied shifts in emphasis by policymakers over the cycle are consistent with the Fed’s mandate. The Federal Reserve has a dual mandate of ensuring price stability and full employment. In expansionary periods, the results suggest that the preservation of price stability becomes the focus of policy, and that a greater weight is given to interest rate smoothing. In recessions, by contrast, a greater weight is attached to restoring full employment and avoiding more detrimental outcomes, and the Federal Funds target tends to be moved more aggressively.

13. The results of this paper suggest that the Fed operates in an asymmetric manner depending on the cyclical state of the economy. These shifts appear to occur in a way consistent with the Fed’s dual mandate, and with the Fed’s risk-management approach to policymaking. This behavior is consistent with nonlinear models of the inflation-output tradeoff (the Philips curve). In periods when the economy is expanding, a change in nominal demand will show up relatively more in inflation than real output, justifying a greater focus on inflation in these circumstances. The opposite holds for recessions. In addition, the shorter duration of recessions suggests that interest rate smoothing may be less relevant.66 However, a nonlinear policy response could also reflect asymmetries in risks and/or assessments of costs of deviating from desired values.

Prepared by Pau Rabanal. A fuller description of the results is available from the author.

See, for instance, speeches delivered at the Jackson Hole conference (Greenspan, 2003) or at the 2004 meeting of the American Economic Association (Greenspan, 2004).

See Woodford (2003) and Clarida, Galí and Gertler (1999). Earlier work by Kydland and Prescott (1977) and Barro and Gordon (1983) emphasized how a rules-based approach reduces the inflationary bias in monetary policy.

Following Erceg and Levin (2003), it is assumed that the Taylor rule reacts to output growth rather than the output gap, which has the advantage that all variables in the right hand side are observable, avoiding the complications associated with uncertainty about estimation of the output gap.

The variances of the shocks are estimated using maximum likelihood. The Kalman filter is subsequently used to obtain the one-step ahead forecasts and the smoothed series for the coefficients, as in Hamilton (1994).

Bayoumi and Sgherri (2004) present similar evidence on time-varying coefficients in the Taylor rule.

Expansions are associated with positive output growth, and recessions with negative growth. The model is estimated using quarterly data from 1960 to 2003, assuming that transitions from one state to another follow a first-order Markov process.

The results are obtained using weighted least-squares regressions, using the probabilities of being in each state as a weight. Starting in 1960 allows a sufficiently large number of recessions to be able to get an accurate reading of the impact of the cycle on monetary response.

For evidence on the nonlinearity of the Phillips Curve in the U.S., see Laxton, Rose and Tambakis (1999). Phillips (1958) also pointed at a convex curve when analyzing the relationship between the wages and unemployment in the U.K. 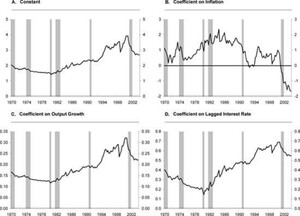 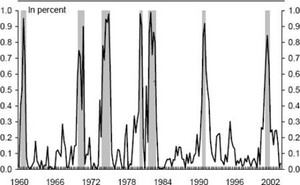