IV. The Increasing Scope of the Alternative Minimum Tax47

1. The Alternative Minimum Tax (AMT) for individuals was created to reduce horizontal inequity in the personal income tax system.48 Minimum taxes in the United States date from 1970, and have been formulated with the stated objective of ensuring that high-income taxpayers pay their “fair” share of taxes, in particular by reducing the number of high-income filers with no income tax liability.49 This objective is pursued by limiting the extent to which tax preferences (deductions, exemptions, and credits) are allowed to reduce taxable income.

2. The AMT has had a small but growing impact on U.S. taxpayers. Through the mid-1990s, fewer than ½ percent of individual taxpayers were subject to the AMT. In recent years, this share has increased to 1½ percent, and is projected to exceed 20 percent by 2010 (Figure 1).50 The share of revenue obtained from the AMT has similarly increased from less than 1 percent of personal income tax revenues in the 1990s to about 2 percent at present, and is projected to reach about 9 percent by 2010.51

3. The AMT’s reach to middle-income households has expanded partly as a result of cuts in marginal income tax rates. The decline in ordinary tax liabilities has contributed to an increasing number of households falling below the threshold for filing AMT returns. While recent budgets have temporarily raised AMT exemption amounts by almost 30 percent, AMT relief is slated to expire at the end of 2004, pending further legislation. However, even providing permanent relief would only slow, not stop, the AMT’s spread to middle-income taxpayers.

4. Without reform, the AMT will increasingly complicate and distort the personal income tax system. While AMT revenues are projected to offset about one third of the cost of recent tax cuts over the medium-term (Burman, Gale, and Rohaly, 2003), their growing reach would add to the already considerable compliance cost for U.S. taxpayers. Moreover, most taxpayers would eventually fall under the AMT by reason of claiming exemptions for dependents and deducting state and local income taxes, which could lead to questions about the design of the U.S. tax system. Indexing tax brackets and exemption amounts to inflation therefore remains central to AMT reform, but additional spending cuts or revenue-raising measures would be necessary to offset the associated revenue loss.

8. The scope of the AMT has expanded because its parameters are not indexed to inflation, unlike the regular income tax. The tax brackets, standard deduction, and personal exemptions in the regular income tax were indexed in 1981. The AMT’s lack of indexing has led to bracket creep, which pushes taxpayers into the AMT even if their real incomes have not significantly increased.

B. Experience with the AMT and Recent Developments

9. Calculating the AMT imposes significant costs on taxpayers and complicates tax policy. All taxpayers have to fill out a worksheet to determine whether they should file the AMT form, and over 75 percent of those required to file end up owing no AMT (NTA, 2001). Lack of knowledge about the system and difficulties in estimating AMT liability before all tax records are collected have led to increased audits and AMT-related tax penalties, especially among taxpayers who make estimated payments (NTA, 2004), although these costs are diminishing with the growing use of tax-preparation software. For policymakers, estimates of the revenue effects of budget provisions are more complicated because of interactions between the AMT and regular income tax. For example, it has been estimated that by 2010, one-third of the benefits provided by the 2001 tax cuts will be taken back by increased AMT liabilities (Burman, Gale, and Rohaly, 2003). The implicit assumption that the AMT would continue in its present form led to lower estimates of the tax cuts’ revenue impact than if AMT reform had been taken into account.

The AMT has received a great deal of criticism for its complexity (see, for example, JCT, 2001; Joint Economic Committee, 2001; and NTA 2001, 2004), but for many taxpayers, AMT calculation can be straightforward (Feenberg and Poterba, 2003). The following are the steps in calculating the AMT:

11. Although the AMT was originally intended to target excessive use of tax preferences, most AMT revenue now comes from preventing the use of personal exemptions and state and local tax deductions. The minimum tax system was originally targeted at recipients of capital gains and other investment income, which received preferential treatment under the regular income tax. However, the Tax Reform Act of 1986 removed these items as AMT preferences. Rebelein and Tempalski (2000) find that a growing proportion of the difference between AMTI and AGI is accounted for by state and local tax deductions, personal exemptions, and the standard deduction (Figure 2), which would not suggest the excessive use of tax preferences. The lack of indexation has, over time, increased the importance of these tax preferences in determining a taxpayer’s AMT liability.

12. High-income taxpayers have also been able to reduce their tax liability significantly by using tax preferences not targeted by the AMT. Many taxpayers without income tax liability claim deductions for investment interest paid or unlimited miscellaneous deductions that reduce their taxable income by over 60 percent, or use a combination of credits to achieve an equivalent reduction in their tax liability (Balkovic, 2003). High-income taxpayers are also more likely to use large deductions as a result of non-cash charitable contributions and the carryover of cash charitable contributions from previous years, while deriving a higher percentage of their income from sources with more favorable tax treatment, including capital gains, dividends, and tax-exempt interest (Campbell and Parisi, 2003).

14. These changes have helped to reduce the AMT burden of taxpayers with AGI below $100,000. For example, the number of taxpayers in this group declined by 25 percent between 2000 and 2003, and the group’s share of total AMT liabilities dropped from 11 percent in 1997 to 5 percent in 2003.53 However, these trends would likely reverse if the temporary relief were allowed to expire.

15. The impact of the AMT is projected to increase significantly over the coming years. Various studies project the number of AMT taxpayers to jump to 30–35 million in 2010, with the AMT contributing around 9 percent of income tax revenue at that time (Table 1). Burman, Gale, and Rohaly (2003) estimate that the effects of inflation will add about 10 million taxpayers to the AMT between 2003 and 2010, and that an additional 18.8 million taxpayers would face the AMT because of marginal rate cuts enacted in 2001. Without the tax cuts, these estimates suggest that the AMT would have accounted for only 2½ percent of income tax revenue, instead of 9 percent. Even if the 2001 and 2003 tax cuts were not made permanent, the AMT’s expansion would continue over the long term due to the lack of indexation. In that case, the CBO (2003a) projects that 70 percent of households would be subject to the AMT by 2050, contributing over 18 percent of personal income tax revenue, equivalent to 3 percent of GDP (Figure 5).

17. By 2010, most taxpayers would be paying the AMT by reason of claiming personal exemptions for dependents and deducting state and local taxes from income. These two factors would account for 90 percent of the difference between AMTI and AGI by 2010 (Rebelein and Tempalski, 1997). Feenberg and Poterba (2003) show that, by 2010, taxpayers with two or more dependents would be twice as likely to pay AMT as the general population, and the likelihood of owing AMT would be much higher for residents of states with high income taxes and for married taxpayers. Even taxpayers not making itemized deductions will be affected—the share of AMT filers claiming the standard deduction is projected to grow to 30 percent, compared to 6 percent in 2001 (CBO, 2004b).

18. Given the increasing number of middle-income taxpayers falling under the AMT, many analysts expect that the system of minimum taxation will be reformed over the coming years. Five policy options are commonly suggested:

19. AMT reform could provide a useful opportunity for restoring the tax to its original purpose—curbing the excessive use of tax preferences—and simplifying the U.S. tax system. Reducing the AMT’s impact would enhance the efficiency of the tax system, in part by eliminating the need for a growing number of taxpayers to calculate two different tax returns. However, AMT reform would also result in substantial future revenue losses, which would need to be offset by expenditure cuts or revenue increases that could introduce new inefficiencies. This suggests that AMT reform should be included in a broader review of the U.S. tax system, aimed at maintaining strong growth incentives while potentially securing additional revenues through base-broadening and other measures.55

This paper focuses on the AMT for individuals. There is also an AMT for corporations; see Lyon (1997) for a detailed study.

Revenues attributed to the AMT only relate to the tax liability in excess of that determined by the standard personal income tax system.

The FY 2005 budget proposes an extension for 2004 and 2005 of the provision that allowed all credits to reduce AMT liability. Nonrefundable personal credits are those that are only allowed to reduce a positive tax liability, while refundable personal credits like the earned income credit are counted as payments, can be refunded to taxpayers with no tax liability, and are available regardless of a taxpayer’s AMT liability.

The share of AMT liability owed by this group peaked in 1997 because, starting in 1998, nonrefundable credits were allowed to reduce regular income tax liability but not AMT liability (Burman and others, 2002).

Distribution of AMT by Income 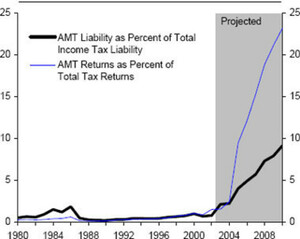 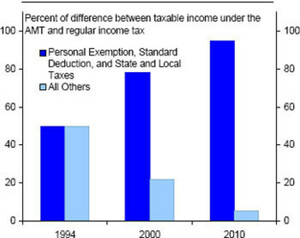 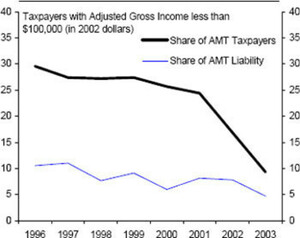 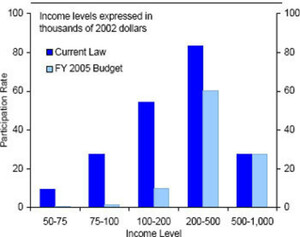 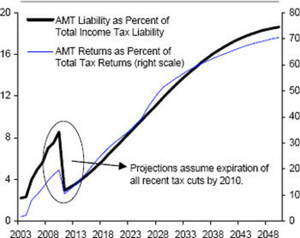 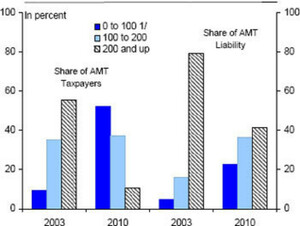 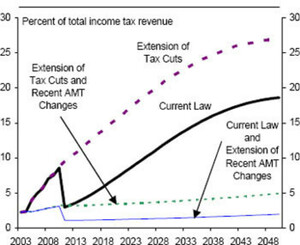