I. Information Technology, Productivity, and the Recovery1

1. Over the period 1995–2000, labor productivity in the U.S. business sector advanced at an average 2½ percent, almost twice as fast as in the previous two decades. A large body of research has attributed this acceleration to rapid investment in information and communication technology (ICT), itself reflecting brisk technological change and tumbling prices. Although spending on ICT has moderated significantly since 2000, labor productivity accelerated even further, growing at an average 3¾ percent over 2000–03 (Figure 1). These developments suggest that trend U.S. labor productivity growth has indeed risen, but still leave open the question whether the recent pace can be sustained.

2. This chapter examines the role of ICT in the recent acceleration of labor productivity growth. The analysis finds that the increase of total factor productivity (TFP) growth is a broad phenomenon that encompasses non-ICT producing sectors, consistent with the view that ICT is a “general purpose technology,” and that changes in business processes and operations in response to ICT and competitive pressures have been critical for boosting productivity. Both these factors suggest that recent gains may be sustainable.

3. The chapter also investigates whether the productivity boom may have dampened employment in recent years. On the basis of two different models assessing the impact of technology shocks on output and employment, the results indicate that the ICT-related acceleration of labor productivity growth has only provided a modest direct contribution to the so-called “jobless recovery.”

A. ICT and Productivity Acceleration: Can It Be Sustained?

5. An initial explanation of the post-1995 acceleration of labor productivity growth emphasized the role of efficiency gains in the ICT-producing sector. The first two of the above channels were seen as linked, in that higher efficiency in the production of ICT goods (indicated by faster TFP growth in the ICT-producing sector) caused a rapid decline in relative ICT prices, generating strong investment in new technologies. Falling prices and a highly elastic demand for ICT products also resulted in a significant increase in the ICT sector’s share in the overall economy. Taken together, these factors have been found to account for between 40 and 60 percent of the aggregate labor productivity acceleration after 1995 (Table 1).

6. The acceleration of TFP growth, however, seems to be widespread and not limited to the ICT sector. Economy-wide productivity gains would likely not be sustainable if they remained highly dependent on prospects in the ICT sector. Even if the pace of technological advance was maintained, doubts have been expressed on whether the demand for ICT products would remain as elastic as in the late 1990s, given the possibility of saturation (Gordon 2003a).2 However, new technologies can generate a long-lasting acceleration of labor productivity if they stimulate complementary changes in business practices, e.g., in production processes and organizational structures, which generate further efficiency gains (De Long and Summers, 2001). Such changes have been found to occur after the introduction of new “general purpose technologies”, for example, electrification at the end of the nineteenth century.3

7. The broad-based acceleration of TFP growth after 1995 is consistent with the “general purpose technology” nature of ICT. Staff estimates of TFP growth in 25 U.S. industries show that the trade sector was a major contributor to the acceleration of aggregate TFP growth between 1995 and 2000 (Figure 2).4 Over this period, TFP growth also accelerated strongly in the Finance Insurance and Real Estate (FIRE) sector.5 These results are consistent with a large body of recent work that has documented the rapid increase in TFP growth throughout the economy. CEA (2003) reports that TFP productivity growth outside the ICT sector increased from ¼ to 1¼ percent per year, accounting for about three-quarters of the overall TFP acceleration in 1995–2002 relative to 1973–95. Similar results were obtained by Basu and others (2003). In their latest round of estimates of U.S. labor productivity growth reported in Gordon (2003b), Oliner and Sichel find that TFP growth outside the ICT sector accounted for 40 percent of aggregate TFP growth after 1995, up from one-quarter in the pre-1995 period (see Table 1).

9. However, non-ICT factors appear to have also played a significant role, including competitive pressures. Baily (2004) notes that U.S. companies were forced to innovate and improve production processes by increases in competitive pressures caused in part by the deregulation process that had started in the 1970s and the increased exposure to global competition. Anecdotal evidence and case studies presented by the McKinsey Global Institute (2002) indicate that successful ICT investment has often followed, rather than initiated, important operational changes by U.S. companies, such as the “big box format” in retail trade.8 This view suggests that the cutback in ICT spending after 2000 may simply reflect an effort by firms to curb excesses in ICT investment rather than signaling weaker productivity in the future.

10. These considerations suggest that the boom in U.S. productivity growth may be sustainable. Although the post-2000 acceleration likely reflects in part cyclical factors, underlying product and process innovations may continue to boost productivity growth rates for the next several years. Gordon (2003b) estimates that the unmeasured investment in intangible capital between 1995 and 2000 subtracted around ½ percentage point a year from productivity growth, and should boost productivity growth by the same amount thereafter. In addition, important sectors of the U.S. economy have a relatively low ICT capital intensity, particularly the service sector. Catch-up processes in these sectors could yield further productivity gains in the future (Mann, 2003).

B. Technology Shocks, Productivity, and Employment

11. The unusually weak employment growth during the recent business cycle is often framed as a result of the productivity boom. Typically, output and labor inputs have tended to move closely together during the U.S. business cycle, with detrended quarterly data since 1948 exhibiting a correlation coefficient in the range of 0.8, regardless of the measure of aggregate output and labor inputs used. However, this strong comovement is less apparent after 2001 (Figure 4).9 This has led many analysts to argue that stronger productivity has allowed firms to economize on labor inputs.

15. Indeed, the VAR results indicate that recent output and employment loses appear to have been largely cyclical in nature, with technological improvements softening the impact on output growth (Figure 6). A model-based decomposition of recent output and employment trends suggests that technology shocks contributed to an acceleration of output growth during 2003, but did not affect employment in either a positive or negative way after the first half of 2002. By contrast, cyclical shocks were the main drag on job creation and output growth. In sum, weak but accelerating output growth in 2002–03 was a result of positive technology shocks and negative cyclical factors that led to significant employment losses.

16. However, the bivariate VAR cannot discern the impact of technology shocks on other macroeconomic variables, such as inflation or unit labor costs. As a further step, Galí and Rabanal (2004) estimate a five-variable DSGE model, which incorporates several real and nominal rigidities, as well as five shocks: a permanent technology shock, a monetary policy disturbance, as well as demand, price-mark-up, and wage mark-up innovations.12

17. The results of the DSGE model are similar to the VAR (Figure 7). Shock extraction and model simulations are shown separately for technology shocks and all other shocks combined (monetary, demand, price, and wage mark up).13 Output growth picked up in 2002–03 as a result of technology shocks, overcoming the combined effect of other shocks that would have kept it below trend. By contrast, technology shocks are again found to have had only a small impact on employment fluctuations.

18. Technology shocks have contributed to the fall in inflation, but appear not to have been a dominant factor. Permanent shocks to productivity lowered the rate of inflation by around ¼ percent after 2002. Demand weakness had much stronger consequences, however, contributing to reduced unit labor costs and inflation. These simulations suggest that acceleration in productivity growth can help reduce inflationary pressures and allow a central bank to be more expansionary than would otherwise be the case, but this effect is modest.

The fall of high-tech stock market valuations and declining ICT spending since 2001 seemed to corroborate this skepticism (UBS, 2002).

The Solow residuals are estimated for 23 U.S. industries using several data sources, including the database used by Jorgenson, Ho, and Stiroh (2004) for their study of productivity performance between 1978–2000. The analysis was restricted by the lack of data on capital and value-added by industry after 2001.

On the other hand, TFP has remained low in the “other services” sector, a composite industry that includes business services, professional and social services, and private health and education. This sector represents about a quarter of aggregate value added, causing a significant drag on total TFP growth between 1995–2000.

Measurement difficulties may help explain why several U.S. sectors have lagged in terms of productivity growth despite strong investment in ICT (see Figure 3).

Brynjolfsson and Hitt (2000) survey evidence on how firms have combined ICT with changes in work practices, strategy, product and services, and customer and supplier relationships.

Job creation has picked up in the first six months of 2004, adding about one million jobs to the work force.

The results of this section are based on the findings in Galí and Rabanal (2004).

Using the VAR literature terminology, this amounts to imposing a long-run restriction on the lagged coefficients, as in Blanchard and Quah (1989).

Real and nominal rigidities in the paper include habit formation in consumption, sticky prices and wages, and indexation in price and wage setting. Monetary policy follows a Taylor rule in which interest rates respond to inflation and output growth.

By construction, all shocks are orthogonal to each other, and the sum of the responses to each shock is equal to the actual values.

Cyclical Behavior of Output and Employment

Quarterly Response of Output and Employment to Technology Shocks

(Deviation from baseline, in percent1)

Contributions of Technology and Cyclical Shocks to Output and Employment Growth1

Impact of Technology and Non-Technology Shocks in the DSGE model

(Deviation from steady state, in percent) 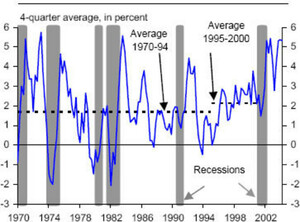 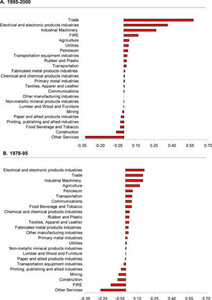 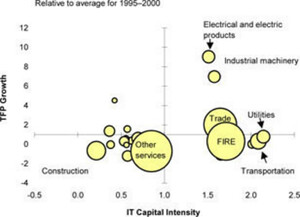 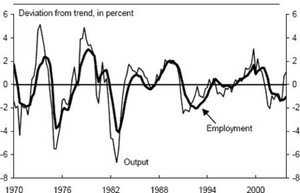 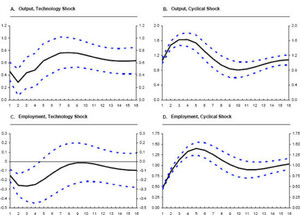 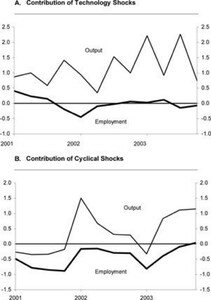 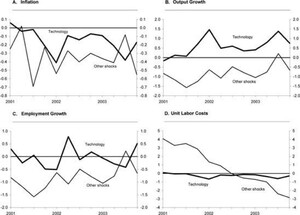