This Selected Issues paper reviews the aggregate balance-sheet analysis that describes the improvement in Thailand's overall balance sheet since the crisis, and also highlights the potential vulnerabilities. It assesses the public debt and contingent liabilities, and developments in the banking sector. It discusses the operations of Specialized Financial Institutions and related regulatory issues, the financial and corporate sector restructuring, and also presents an overview of developments in nonperforming loans and assets. It reviews the growth without credit feature of Thailand, which explains how firms have financed their operations after the crisis.

This Selected Issues paper reviews the aggregate balance-sheet analysis that describes the improvement in Thailand's overall balance sheet since the crisis, and also highlights the potential vulnerabilities. It assesses the public debt and contingent liabilities, and developments in the banking sector. It discusses the operations of Specialized Financial Institutions and related regulatory issues, the financial and corporate sector restructuring, and also presents an overview of developments in nonperforming loans and assets. It reviews the growth without credit feature of Thailand, which explains how firms have financed their operations after the crisis.

1. A striking feature of the post-crisis Thai economy has been that while the economy has grown a cumulative 20 percent since bottoming out during the crisis, real credit to the private sector has declined by nearly a corresponding amount. This paper puts Thailand’s experience in an international perspective and explains how firms have financed their operations.

2. The main findings of this paper are:

3. Thailand’s experience has successively demonstrated that corporate deleveraging need not jeopardize growth prospects. Going forward, the demand for financing is likely to accelerate as the output gap closes and firms need to expand capacity. While a resumption of healthy credit growth will strengthen the banking sector, continued development of capital markets will build Thailand’s resilience to shocks to the financial system.

4. This paper is organized as follows. The next section compares credit developments in Thailand to a sample of crisis countries. The following section provides details on the credit contraction in Thailand. Section D describes the other sources of financing which firms have tapped as credit contracted.

B. Credit Trends in Crisis Countries

5. The accompanying two figures show the evolution of the credit-to-GDP ratio in a number of recent crisis countries.2 The first figure splits out credit developments in a “boom-and-bust” group—defined as countries where the credit ratio is at least 25 percent less than its pre-crisis peak 3 years after the crisis. Thailand is not the only member of this group. Indeed, the fall in the credit ratio is more pronounced in Mexico and Indonesia. The other crisis countries show greater variance in the pre- and post-crisis evolution of credit but on average show a similar pattern, though much less pronounced—the overall trend in this sample for the 11 year period centered on the crisis is positive. The decline in real credit is more pronounced than indicated by the credit ratio as in nearly all countries growth of real output recovers 1–2 years after the crisis.

6. Other studies shows a similar result. From a sample of 39 middle-income countries, Tornell and Westermann (2002) report that, on average, growth recovers to its pre-crisis levels 2 years after a crisis but the slowdown in real bank credit continues well into the third post-crisis year. An explanation advanced is that the credit crunch is focused on the non-tradable sector because it is worse hit by a crisis. Meanwhile, output in the tradable sector, being driven in part by external demand, recovers faster and firms in this sector, because of their foreign currency denominated earnings and generally larger size, are able to get financing from non-bank as well as external sources.

C. The Credit Contraction in Thailand

7. Many papers have been written on the credit-crunch in Thailand.3 Several argue that the credit contraction immediately following the crisis is consistent with a credit crunch (defined as banks not willing to or able to meet the demand for credit) but that the persistent decline in credit months after the crisis is more likely explained by contracting demand. For instance. Mody and Taylor (2002) find that an international capital crunch lasted only until mid-1998 in Thailand. These studies focus on separating demand from supply effects rather than on the issue of growth without credit.

8. The bulk of the credit decline in the aftermath of the crisis was due to finance companies and off-shore banks. Credit extended by both these institutions grew rapidly the years preceding the crisis. Finance companies (FCs), which issued promissory notes, fueled the asset price boom by concentrating lending to real estate related activities and personal consumption (primarily mortgages and financing of consumer durables).4 At the same time off-shore banks, part of the Bangkok International Banking Facilities (BTBFs), channeled increasing large inflows of foreign capital. As activity slowed and asset prices began to decline in late 1996, the finance companies were the first to collapse. By end-1997 56 of the 91 finance companies were closed and a process of auctioning of their assets was started. The decline in BIBF lending occurred in large part as Japanese banks began to reduce their exposure to Thailand in light of growing problems at home.

9. The decline in headline credit statistics does not correspond to contraction in availability of actual credit to borrowers. The contraction for borrowers is less when the credit data are adjusted for valuation effects of foreign currency denominated BIBF lending and for write-offs and transfers of loans to asset management companies by commercial banks (CBs), When these adjustments are made, credit falls by 6 percent of its pre-crisis peak (as opposed to by 45 percent in the un-adjusted series).

10. A breakdown of credit between tradable and non-tradable sectors is difficult to interpret but suggests that export-oriented manufacturing sectors fared better. In the aftermath of the crisis, credit fell in both tradable and non-tradable sectors.5 If loans by finance companies are also taken into account the relative decline in credit in non-tradables is even greater. A significant portion of the decline nevertheless took place in the manufacturing sector, some of which may be producing non-tradable products. The figure breaks out manufacturing credit by export orientation of the industry. Export-oriented industries (defined as industries where exports account for over 60 percent of total production) experienced a smaller decline in credit and indeed had higher credit at end-2002 that) just before the crisis.

11. Nevertheless there has been a significant decline in the availability of real credit. This is all the more so considering the expansion in the real economy and the decline in foreign credit. The credit data from the monetary survey do not include direct lending by foreign banks. Bank for International Settlements (BIS) data show that the consolidated claims of foreign banks on Thailand have fallen by $30 billion since the pre-crisis peak. Aggregating the different sources of credit, the total estimated decline in available financing is slightly less than 1 trillion baht.

12. Historically, growth in real output and credit have moved in tandem. As such the recent slowdown in credit is in marked contrast to pre-crisis economic history. This section documents the non-bank sources of financing which have supported growth.

13. Lending by specialized financial institutions (SFIs) has picked up considerably since the crisis. Total credit extended by six SFIs grew by about 270 billion baht between the end of 1997 and the first quarter of 2003. However, a quarter of this increase was mortgages and hence the increase for other investment has been less.

15. Capital market financing has also risen though most issues have been by banks. Historically banks have been the primary source of finance in Thailand. Although the bond market expanded after the crisis, it was mostly on account of government borrowing for the costs of financial sector restructuring. Of the private issues since the crisis, most of the increase in new issuance is due to financial firms. Similarly, new equity issues also rose but mostly on account of banks. However, this trend refers to gross issues and does not give information on redemptions. Using data on Stock Exchange of Thailand (SET) listed companies, there is evidence that there was net increase in equity capital raised (as measured by the paid-up capital).

16. Firms have increasingly relied on internal finance. The following two figures are based on the reported data of non-financial SET listed firms. Both measures of cash balances—average firm balances and median cash to sales ratio—begin to rise after the crisis and are now nearly twice their pre-crisis levels.

17. In addition to the above factors which point to a greater reliance on non-bank sources of finance, the demand for finance has also been depressed in the post crisis period. Although investment has begun to grow, the level of investment—and hence the demand for credit—remains well below pre-crisis highs. Capacity utilization is also below pre-crisis levels suggesting that most demand has been for working capital rather than capacity expansion.

18. This paper has shown that Thailand’s pronounced boom-bust credit experience is not unique from an international perspective and has documented the non-bank sources firms have tapped to grow. A key encouraging policy implication is that the ongoing process of corporate deleveraging need not jeopardize growth prospects. Corporate financing needs are likely to increase in the future as investment and capacity utilization recover to their pre-crisis levels. Healthy credit growth together with greater development of capital markets will strengthen Thailand’s financial system and allow for a solid foundation for growth.

Crisis dates are from Tornell and Westermann (2002). Credit (and GDP) data are from IFS and correspond to the broadest available measure of claims on the private sector.

See Haksar (2000) for more information on the role of finance companies in the crisis.

A sectoral breakdown for adjusted credit data is not available. Tradable sectors are taken to be agriculture, mining, and manufacturing and non-tradables construction, real estate business, services (including trade) and personal consumption.

Fall in Credit After Ajusting for Valuation, Writeoffs, and Transfers to AMCs 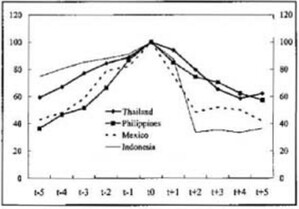 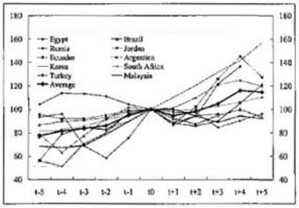 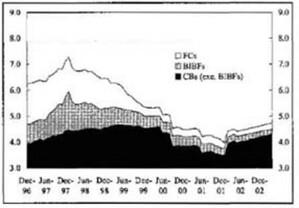 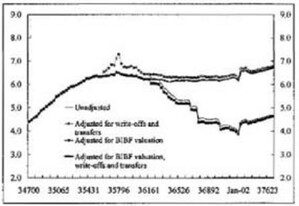 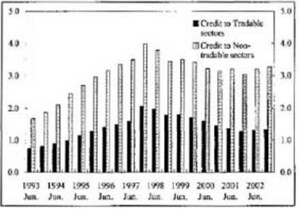 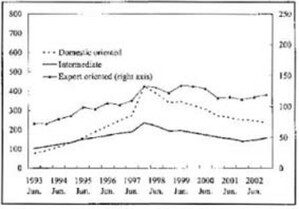 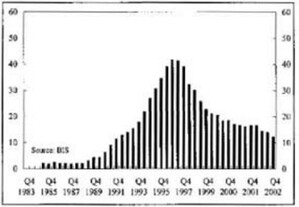 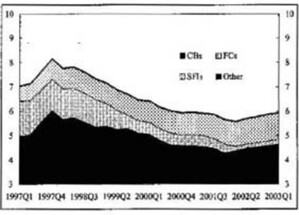 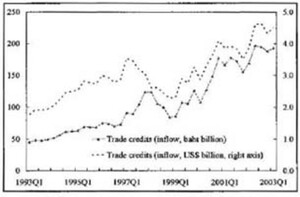 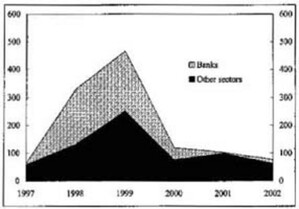 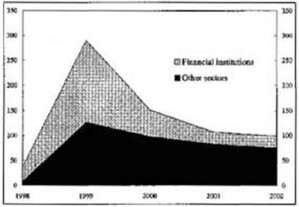 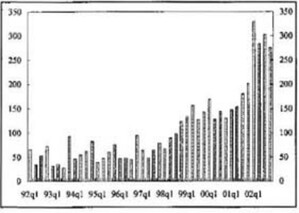 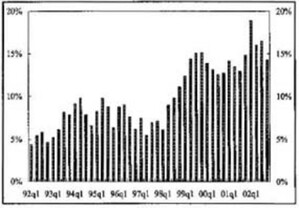 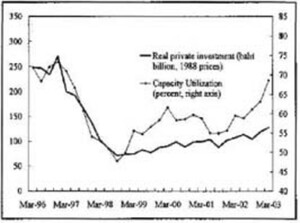