XII. An Update on the Chilean Banking System1

1. This note provides a brief update of the Chilean banking system by reporting recent developments and regulatory changes, standard prudential indicators, and the view of rating agencies. The recent Inverlink affair is also discussed, with the focus on the preemptive liquidity measures taken by the authorities after this incident of fraud came to light.

A. Structure and Activities of the Banking System

2. As of December 2002, the Chilean banking system held about US$63.2 billion in assets or about 100 percent of GDP—including about US$44.5 billion in loans and US$12.3 billion in negotiable financial instruments.

3. The structure of the banking system continues to evolve. Currently the system consists of twenty-six banks, including seven branches of foreign banks and the government-owned bank (Banco del Estado). During 2002, two new banks (Banco Ripley and Banco HNS) entered the system. Early in 2003, the only remaining finance company or consumer credit agency (Financiera Conosur, with 53 branches throughout the country) became a full-fledged commercial bank (Banco Conosur).

6. Banks have not been heavily involved in underwriting and securitization, even though the 1997 amendment to the 1986 banking law permits such activities. Banks’ involvement in the derivatives market is dominated by currency hedging. Banks participate actively in forex forwards and swaps.

7. A long-standing characteristic of the Chilean banking system, its relatively low levels of dollarization, continues to hold (Figure 2). Since early 2002, dollarization ratios have been essentially flat (for deposits) or have tended to decline slightly (for loans).3

8. The banking system appears fairly concentrated. The ten largest banks account for some eighty-five percent of deposits and loans, and the two largest banks represent almost half of the system’s deposits. Such concentration might raise concerns of possible anticompetitive practices and increased systemic risk. However, recent studies find that Chile does not standout as having a particularly concentrated banking system, that this concentration so far has not adversely affected the degree of competition and that larger banks are not associated with riskier practices in Chile.4

9. The system also continues to have significant foreign participation. Foreign-owned or controlled banks’ assets account for close to 46 percent of the top 10 banks’ assets. Recent cross-country research associates the presence of foreign banks with the import of sound risk management systems developed by head offices with advanced financial and banking markets, and with increased efficiency of domestic banks.5 In some countries, there has been concern that entry of foreign banks could eliminate the small local banks which normally cater to low-income consumers; however, there is no empirical evidence to support this claim,6 fa addition, in Chile, Banco del Estado ensures the provision of banking services io all regions of the country through its widespread branch network, maintains a large volume of passbook savings accounts, and makes a substantial amount of consumer and mortgage loans including to tow-income households.7

B. Recent Change in Banking Regulation and Supervision

10. Mortgage refinancing activity has been spurred by the November 2002 approval by congress of the elimination of me “stamp” tax paid on refinancing of home mortgages and by low interest rates.

12. In Chile, the central bank and the superintendency of banks (SBIF) have regulatory powers over the banking system. Since the 2002 Article IV consultation:

13. Perhaps the most significant of these regulatory changes has been allowing banks to design their own portfolio risk models. The regulation anticipates the new direction of the Basel II committee’s recommendations of moving to greater reliance on banks’ internal risk management systems. The SBIF reports that it is training its staff to better understand and evaluate the banks’ internal risk models. The SBIF also reports that its risk unit has met with all the risk departments of the different banks to look into the assumptions of the banks’ risk models and to ensure consistency between the asset classification and their provisioning.

Basic capital is equivalent to capital and reserves.

Basic capital is equivalent to capital and reserves.

16. Even with the favorable prudential indicators just listed, the Chilean banking system could still be exposed to a number of potential shocks. In order to assess the vulnerability of the banking system to some of these shocks, in late 2001 staff conducted stress tests.10 The tests consisted of applying: (i) a hypothetical 25 percent depreciation of the peso to the net foreign exchange rate exposure of each bank; (ii) a shock to the Central Bank bonds yield curve and using a repricing gap model of interest rate risk to analyse the sensitivity to interest rate shocks of the difference between the flow of interest earned by each bank’s assets and flow of interest paid on its liabilities; and (iii) a credit risk shock by assuming that the share of overdue loans as a percentage of total loans doubled with 100 percent provisioning of the simulated increase. Most banks would have been able to comfortably met the minimum risk-based capital adequacy requirements after each shock.

17. The SBIFis considering making this kind of stress analysis part of its routine vulnerability assessment. The SBIF is currently engaged in an updated, similar stress-testing exercises, and expects to release its findings.

D. Preemptive Liquidity Measures: The Aftermath of the Inverlink Affair

18. A case of fraud of some significance, involving a financial holding company, emerged in March 2003. Although this case originated outside the banking system, its repercussions soon extended to the banking system.

19. In early March, a bribed official at CORFO (a second-tier development bank, under the supervision of the Ministry of Economy) was discovered to have handed over more than US$100 million in government-owned securities to Inverlink, a private financial holding company, which had then recently sold them in the secondary market. Only a few weeks earlier, Inverlink—whose interests included a mutual fund, an insurance company and a pension fund—had been caught bribing a central bank employee to deliver confidential information.

20. When the theft and subsequent sale of Corfo’s financial instruments was discovered on March 7, the Treasury asked the courts to declare an embargo on the payment of the stolen instruments. After finding enough merit on the request, the courts complied and declared an embargo. Trading in all time deposits soon stopped as the market worked to sort out the holders of the stolen instruments. The holdup on trading of time deposits generated some market uncertainty. A number of mutual funds (most of them bank affiliates) also experienced very significant withdrawals.11 As a consequence, the liquidity needs of the banking system increased markedly. In response, from March 10–14:

21. The Central Bank allowed the liquidity to remain in the system until March 24. In hindsight, the extended liquidity period was more than adequate, judging by the fact that, on average, for this period the interbank rate was 20 bp below the monetary policy rate. The authorities indicated that the reason for this liquidity excess was to signal the central bank’s intent to meet any liquidity needs during the exceptional circumstances. The liquidity excess was gradually removed until its total recall on April 8.

22. Looking back, major systemic effects were avoided because the banking system as a whole is on a sound footing; because it is vastly larger than the amount of stolen securities (0.15 percent of GDP);12 and because of the swift intervention of the central bank and the SBIF. In the end, the episode did not induce rating agencies to change any of their bank ratings.13

23. Although the CORFO-Inverlink affair has not had a negative lasting effects for the banking system, it did bring out to light a number of current and potential problems with the financial system and its supervision:

24. In response, the authorities appended a number of proposals to the capital market reform package that had been already in preparation. Capital Market Reform II is an ambitious set of 60 proposals, recently sent to congress, to either modify old or create new laws. The proposals include:

26. Tables 2–3 report the long-term foreign and local currency classifications of individual banks, as of July 2003. These tables present a picture of a stable banking system with the four largest banks displaying some of the best ratings and with most banks assigned a positive outlook.

27. The Chilean banking system continues to command a reputation for stability and strength. The system has been tested in the last two years by regional uncertainties, slow recovery, and more recently, by a home-grown shock, in the form of the Inverlink case. The system has weathered these shocks well. However, the first type of shocks highlights the importance, as suggested in the Moody’s and Fitch reports, for close monitoring. The adoption and improvements of vulnerability assessments techniques of the type discussed in Section V, are likely to help analysts in their endeavor.

28. The shock originating from the Inverlink case highlighted the need for modernization of certain practices and regulations involving transactions and custody of securities in secondary markets. The authorities took swift action and seized the opportunity to add proposals for some of these needed changes to the Capital Markets Reform II program that had been under preparation and is now in congress. Furthermore, the SBIF has started to anticipate the new winds of the Basel II Accord. However, as the globalization process continues, as new financial products become part of the banking landscape and as the line between banking and other financial sectors continues to blur, regulation and safety net designs will have to adopt flexibly and expeditiously in Chile as elsewhere.

Prepared by Marco A. Espinosa-Vega.

The system’s technology to evaluate consumers creditworthiness is fairly strong. The local credit Bureau (DICOM) is owned by Equifax.

Earlier, the 4 to 5 point rise in dollarization ratios seen from January to October of 2001 was associated partly with a 23 percent depreciation of the Chilean peso against the U.S. dollar, rather than a significant flow increase.

Some of this activity reflects savings deposits and the servicing of subsidized mortgages provided in conjunction with government low income housing programs.

Chile differs from GAAP accounting practices regarding overdue loans. Only the portion of loan overdue for more than 90 days is classified as overdue, unless legal proceedings are initiated for recovery.

Banco de Chile and Banco Edwards merged in January, and the Santander and Santiago banks merged in August.

A reported US$800 million was withdrawn from the mutual funds, out of a total of US$6.2 billion after the scandal broke.

Total assets of the banking system are close to 100 percent of GDP.

The Impact of Nominalization on the Banking System’s Loans & Deposits 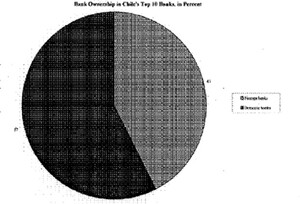