The continuing weakness of activity in the euro area reflects an amalgam of cyclical and long-term forces that are likely to shape the outlook and to challenge policies. Financial conditions in the area have improved along with those in global markets, though financial fragilities may be impairing the transmission to firms. The aging of the population could entail significant declines in potential output growth and lower expected lifetime income resources. Forward-looking policies are needed to improve the quality and ensure long-term sustainability.

The continuing weakness of activity in the euro area reflects an amalgam of cyclical and long-term forces that are likely to shape the outlook and to challenge policies. Financial conditions in the area have improved along with those in global markets, though financial fragilities may be impairing the transmission to firms. The aging of the population could entail significant declines in potential output growth and lower expected lifetime income resources. Forward-looking policies are needed to improve the quality and ensure long-term sustainability.

1. This supplement reports on economic and financial developments in the euro area since the issuance of the staff report (SM/03/278). The new information docs not alter the thrust of the staff appraisal.

2. Recent indicators on recovery prospects in real economic activity have been encouraging. The bellwether IFO and BNB (Belgian National Bank) surveys, typically good leading indicators of area-wide business sentiment, turned sharply up in August (Figure 1). Moreover, while survey increases in past months were driven by the expectations components, the August increases included an improved assessment of current conditions. Improving sentiment was echoed in the Reuters’ Purchasing Managers Indices (PMIs) surveys for August, which showed broad-based increases for both the manufacturing and services sectors (Figure 1), though the manufacturing index remained below the 50 point threshold conventionally viewed as signaling a preponderance of contractionary forces. At the same time, the flash estimate for the second quarter indicated GDP stagnated, but subsequent country releases suggest the estimate is likely to be revised down to modestly negative growth. Reflecting the poor second-quarter outcome, the staff’s forecast for growth in 2003 has been revised down from % percent at the time of the issuance of the staff report to ½ percent in the current WEO. Activity next year is still expected to expand at about 2 percent.

3. Inflation has again proved sticky, continuing to hover around the ECB’s target of below-but-close-to 2 percent. The flash estimate for August indicates headline inflation rose slightly, to 2.1 percent from 1.9 percent in July, reflecting recent increases in energy prices (compounded by the depreciation of the euro), and the impact of the unusually hot summer on food prices. The persistence of these factors in September suggests inflation is unlikely to fall appreciably in the near-term. Beyond that, however, with the recovery projected to be very gradual, continued sub-par growth will add to economic slack and the staff continues to project inflation to decline significantly during the course of next year, though somewhat less than at the time of the issuance of the staff report. The forecast for inflation for 2003 has been marked up to 2.0 percent from 1.9 percent at the time of the issuance of the staff report, and that for 2004 to 1.6 percent from 1.4 percent. Longer-run inflation expectations seem to remain well anchored at levels below but close to 2 percent.

5. At its latest meeting on September 4, the ECB’s Governing Council left policy interest rates unchanged, with the main refinancing rate remaining at 2 percent. The Governing Council noted that downside risks to the baseline scenario for economic growth had declined over the past two months but not disappeared. Inflation was expected to continue to hover around 2 percent for the remainder of the year, before falling below 2 percent next year and stabilizing at levels consistent with price stability. In sum it saw the current level of interest rates as appropriate, as the medium term outlook for price stability continued to be favorable. Forward markets are continuing to price in no changes in policy rates in the near term and expect a hike by 25 basis points in March next year.

6. On fiscal policies, recent upward revisions to official estimates of budget outcomes in Germany and France during 2003 have been in line with staff projections contained in the WEO. With the budget planning process for 2004 now underway and most private sector and official institutions’ projections—including the staff’s—continuing to see both countries remaining in breach of the 3 percent deficit limit for a third year running, tensions and debate about the Stability and Growth Pact (SGP) have once again intensified. With some calling for more flexibility but others arguing for no relaxation of the rules, interpretation of the pact could be a key theme of the informal ECOFIN meetings at the end of this week. The next critical test of the pact comes on October 3. This is the deadline established under the pact’s Excess Deficit Procedure for France to take measures to bring its excess deficit below the 3 percent limit in the year following its identification, i.e., 2004. In the previous excess deficit cases of Portugal and Germany, ECOFIN concluded that measures committed to by these countries at the time were sufficient to correct the breaches in the specified time frame. In the case of France, recent official announcements have so far stressed the need for further tax cuts, albeit moderate, thus reducing the initially envisaged structural adjustment (½ percent of GDP) in the course of 2004.

7. In the staff’s view, improved prospects abroad, rising confidence domestically, further gains in equity markets, and the strengthening of the U.S. dollar have all made the risks to the forecast more balanced. Nevertheless, the basic thrust of the staff’s appraisal in the issued report with regard to monetary and fiscal policies remains unchanged, in particular: 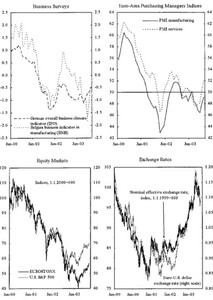