VIII. Globalization and Business Cycles in the United States1

1. The synchronized economic slowdown in the United States and other industrialized countries has heightened questions regarding the impact of trade and financial linkages on business cycle spillovers across countries. This chapter documents the growth in linkages between the United States and other G-7 countries and examines the relative importance of global versus domestic factors in driving business cycles since the 1960s. The results suggest that global factors have become more important during the past decade, and that a rebound in U.S. economic activity could also have significant beneficial effects on other G-7 economies.

2. Trade linkages among the G-7 have increased tremendously during the past four decades. U.S. trade (i.e., the sum of exports and imports) has grown roughly three times faster than output since 1960, reaching about 20 percent of GDP in 2002 (Figure 1). Trade growth has been even more rapid among the other G-7 economies, which have traditionally had larger trade volumes relative to GDP than the United States.

3. Trade based on vertical specialization has also increased significantly. For example, the share of exports that have been processed from imports has increased for both the United States and other G-7 countries (Figure 2). Vertical specialization explains 30 percent of the growth in industrialized countries’ exports from the 1970s to the 1990s (Hummels, Ishii, and Yi, 2001), suggesting that increased trade in intermediate goods and the existence of supply chains that stretch across many countries may have made international trade a powerful channel of business cycle transmission.

4. Global capital markets have also become significantly more integrated over the past two decades. In the case of the United States, the sum of inflows and outflows of foreign direct investment and other private capital flows has surged from less than 3 percent in the early 1970s to more than 18 percent of GDP in 2000. For other G-7 countries, gross capital flows have on average reached nearly 45 percent of output (Figure 3).

6. The effect of financial linkages on business cycle correlations is also ambiguous. Increased capital mobility would typically be expected to increase business cycle synchronization, as shocks are transmitted more easily across countries. However, the globalization of financial markets could also facilitate the ability of countries to specialize in production and thereby insulate themselves from shocks in other countries (Kalemli-Ozcan, Sorenson, and Yosha, 2003).

7. This ambiguity has been reflected in recent empirical studies. For example, Heathcoate and Perri (2003) show that the U.S. business cycle has become less correlated with the aggregate cycle of Europe, Canada, and Japan since the 1960s. Helbling and Bayoumi (2003) also find a decrease in output correlations between the United States and some other G-7 countries since 1973, but suggest that correlations across the other G-7 economies have remained relatively stable. Moreover, Doyle and Faust (2002) show that there has been no significant change in the correlations of the growth rate of GDP in the United States and in other G-7 countries since 1970. By contrast, some recent studies demonstrate that the business cycle linkages have become stronger over time, including Kose, Prasad, and Terrones (2003) and Kose, Otrok, Whiteman (2003a).

B. Synchronization and Changing Role of Global Factors

8. To examine the effect of globalization on the co-movement of business cycles, it is helpful to isolate the impact of common shocks—such as oil price increases—from that of globalization. To that end, three distinct sub-periods are considered: the Bretton Woods period of fixed exchange rates (1960:1–72:4); the common shocks period, during which the world economy was buffeted by severe shocks to oil prices and subsequent disinflation (1973:1–86:2); and the globalization period (1986:3–2001:4), which coincided with dramatic increases in the volume of international trade and financial flows.

9. A comparison across these three periods suggests that business cycle linkages have increased. In particular, while the volatility of U.S. output fluctuations has fallen since the 1960s, the co-movement of U.S. output with that in other G-7 countries has generally grown. The standard deviation of U.S. real GDP growth has also declined significantly since the 1960s, which has been true for the rest of the G-7, except for Germany and Japan, where output volatility has increased in the past decade (Figure 4).2 At the same time, the correlation between U.S. output and output in Canada, France, and the United Kingdom has increased, while the correlation between U.S. output and output in Germany and Japan has declined (Figure 5).

10. The apparent increase in co-movement across the G-7 can be confirmed using a dynamic latent factor model. This approach helps to take into account the potentially important role of dynamic relationships not captured by contemporaneous correlation measures, as well as cross correlations between different macroeconomic variables. Using the methodology employed in Kose, Otrok, and Whiteman (2003b), the model decomposes macroeconomic fluctuations among the G-7 into (1) a “world factor” that is common across all variables/countries; (2) country-specific factors, which are common across the main aggregates within a country; and (3) factors specific to total output, consumption, and investment (idiosyncratic errors). In particular, there are three types of factors in the econometric model: the single world factor (fworld), seven country-specific factors (, one per country), and 21 factors specific to each variable (ϵi, t, the “unexplained” idiosyncratic errors). Thus for observable i:

Output, consumption and investment data for each of seven countries are used as observables, so there are 21 time series to be “explained” by the eight factors, and there are 21 “regression” equations to be estimated.

13. The role of world factor in explaining the co-movement of business cycles across the G-7 countries has become more important during the globalization period. The share of output variance explained by the world factor increased from roughly 7 percent in the Bretton Woods period to 19 percent in the globalization period, and the share of investment variance tripled (Figure 7c). However, there was only a marginal increase in the average variance of consumption explained by the world factor, suggesting that there are consumption smoothing opportunities across countries that remain to be exploited.3 By using international financial markets more effectively, domestic consumers could isolate themselves from the effects of country-specific shocks. This, in turn, could lead to a much larger share in the variance of consumption attributable to the world factor.

14. The world factor appears to have been less important in explaining output volatility in Germany and Japan (Figure 7d). This likely reflects the relative importance of domestic forces that have swamped the importance of globalization. The Japanese economy, in particular, has suffered from a sharp fall in asset prices and a severe banking crisis, while the German economy has been affected by the aftershocks of unification. Nevertheless, given the current export dependence of both countries’ economies, global developments have again gained in importance in recent years.

15. Global factors have played a larger role in explaining the dynamics of business cycles in the G-7 countries during the period of globalization. The exception to this finding is the behavior of cycles in Germany and Japan, where country specific and idiosyncratic factors appeared to have at least temporarily overshadowed the impact of trade and financial linkages. Key implications include:

Theory suggests that financial integration should lead to highly correlated consumption fluctuations, except for preference shocks and nontraded consumption goods. This is because it is possible to design an international portfolio allocation that could eliminate all risks associated with country-specific shocks.

For example, Kose, Otrok, and Whiteman (2003a) use a 60 country sample and report that the correlation between the median world factor and U.S. output growth is 0.62.

There are only five other countries (Sudan, Brazil, Argentina, Japan, and Myanmar) with trade to GDP ratio smaller than that of the United States (Gruben, 2003).

Correlation of G-7 and U.S. GDP Growth in Different Periods 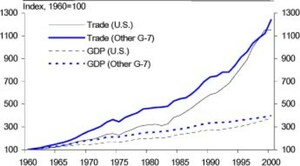 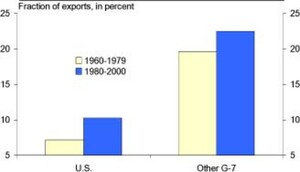 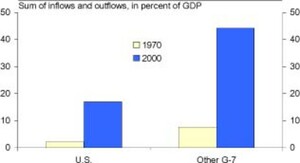 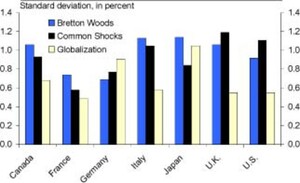 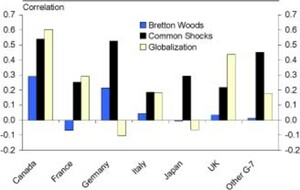 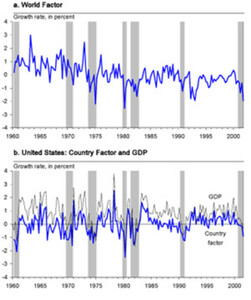 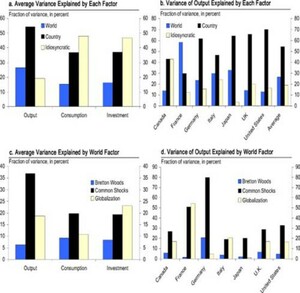