1. The recent volatility of world energy prices has led to concern regarding the potential adverse effects on the U.S. and world economies. Geopolitical and other factors helped cause world oil prices to roughly double between late 2001 and March 2003, and prices remained elevated into June. Natural gas prices also have risen sharply, nearly tripling from levels in 2000, amid concerns regarding supply constraints, including in pipeline and storage capacity, and rising demand. The already tentative nature of the current U.S. recovery, as well as the adverse effect of previous energy price shocks—including oil price shock of the 1970s, have led many analysts to worry that high energy prices pose continuing risks to U.S. growth prospects.

2. This chapter examines the impact of energy shocks using the IMF’s Global Economy Model (GEM). The GEM model is particularly useful because it permits the analysis of supply as well as demand effects, reflecting the use of energy as both intermediate and final consumption good. The simulation results suggest that the impact of energy price shocks tends to be moderate, especially if price hikes are short-lived and monetary policy responds appropriately.

A. The Modeling Framework

3. GEM is a new open-economy macroeconomic model based completely on a choice-theoretic framework.2 A two-country version of GEM is considered here, comprising the United States and the rest of the world. The model includes four types of goods: (1) energy (oil and natural gas) as a tradable intermediate input; (2) a traded intermediate good; (3) a non-traded intermediate good; and (4) a non-traded final consumption/investment good. Energy is used in the production of both the traded and non-traded intermediate goods and consumed directly in the final good. The model incorporates a distribution sector that uses non-traded goods to deliver energy to its final users. This implies that the retail price of energy changes by less in percentage terms than the producer price of energy.3

4. Energy prices are market determined under monopolistic competition, implying energy firms charge a markup over marginal cost. Energy is produced with capital, labor and land—a fixed factor—using a constant elasticity of substitution (CES) technology. Price shocks can originate from two sources on the supply side: changes in the quantity of land available for use in energy production, and changes in the markup charged by energy firms. With an extremely large elasticity of substitution between domestically produced and imported energy goods, changes in the quantity of land, or in the markup in the rest of the world, lead to identical changes in energy prices for both foreign and U.S. producers.

5. With two central roles for energy in the economy, each with different frictions, energy price shocks affect volumes and prices with different speeds. Because the short-run costs of switching to more energy-efficient production processes are high, profit-maximizing firms respond to increased energy costs by reducing the labor input. The impact on production output is therefore felt relatively quickly. However, competitive pressures are assumed to impose costs on firms that change output prices too rapidly, and the effect on non-energy goods prices is therefore only felt over time. By contrast, energy price shocks have an immediate impact on the consumer price index, and therefore on real wages and household welfare, because energy is consumed directly in the final consumption good.

6. The model was calibrated to reflect U.S. oil and gas usage in 2000. Valued in terms of real producer prices, the consumption of oil and natural gas was set at 2.4 percent of GDP, of which 1.1 percentage points are produced domestically and the remainder are imported. The calibration assumes that roughly half of the energy consumed is used in the production of intermediate goods, and another half in the final consumption good.

7. The impact of energy price shocks is illustrated by a 50 percent increase in the price of oil and gas. Three alternative durations for the shock are considered: the first alternative has a duration of only one quarter, the second has a half life of one year, and the final alternative has a half life of five years.4 These shocks are induced by changing the markup charged by the energy producers in the rest of the world.5 The model incorporates rational expectations, so that future energy price paths are completely understood by all agents. The responses of several key variables are presented in Figure 1.

8. Output losses are relatively moderate, including in the case of an energy price shock lasting over several years:

9. However, there are several reasons why these simulations may understate the effects of energy price shocks especially when compared to historical episodes:

10. The simulation results presented here suggests that the impact on U.S. growth of temporary energy price shocks should be mild. A short-lived spike in energy prices, such as occurred during the past year, would have a modest and short-lived impact on growth. The simulations also suggest that even in the face of expectations that a shock would be longer-lived, the impact on growth would be only marginally larger. However, the results have to be interpreted with caution, in part because the analysis does not incorporate confidence effects of the kind that have accompanied oil price shocks in the past.

Because adjustment is costly, prices and volumes respond gradually to disturbances, allowing a fundamental stabilization role for policy in GEM. The theoretical structure and the derivation of the model can be found in Pesenti (2003), and an extension of the model fully incorporating the oil market is explained in Hunt (2003).

A half life of one year implies that the price of energy has moved half way back to its initial level after one year (from 50 percent to 25 percent above baseline).

From a modeling standpoint it is easier to achieve a desired path for energy prices by changing the producer markup than by changing the quantity of land available for energy production. Preliminary work suggests, however, that the source of the shock does not significantly affect its impact.

The two-country setup used for this analysis implies that the rest of the world (which includes energy exporters) experiences a positive terms of trade shock. Initially, output in the rest of the world declines by slightly more than in the United States, since production is assumed to be more energy-intensive. Especially under the more persistent shocks, however, the positive income effects eventually lead to a much smaller decline in absorption than in the United States. While the effect on other oil-importing countries would be similar to that in the United States, positive effects would essentially be confined to oil exporters.

Hunt (2003) considers alternative responses of workers and the monetary authority.

United States: Impact of a Fifty Percent Increase in the Producer Price of Energy 1/

In percent or percentage point deviation from baseline 2/ 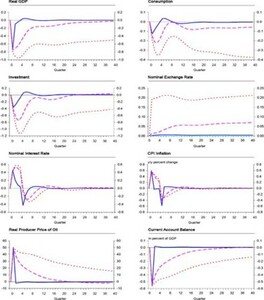