1. The recent drop in household wealth has raised concern regarding the extent to which consumption can continue to support the U.S. recovery. Household net worth has fallen sharply since 2000, from about 6¼ times personal disposable income to 4½ times personal disposable income. While personal saving rates have risen somewhat, the increase seems smaller than what would be implied by a casual inspection of the relationship between wealth, income, and saving. Indeed, Figure 1 suggests that the personal saving rate would need to increase by around 2½–3 percentage points to match the current levels of household wealth.

2. However, the analysis presented in this chapter suggests that the saving rate is only about 1 percentage point below its long-run trend.2 This unexpectedly modest differential reflects several factors. First, the effect on the saving rate of the decline in equity wealth has been partially offset by the effect of increases in other forms of wealth, including real estate and relatively liquid wealth such as demand deposits. Second, the U.S. saving rate has exhibited a secular, downward trend over the past decade—due, in part, to financial innovation.

A. Recent Trends in Household Wealth

3. The sharp increase in household wealth during the past decade has reflected gains in the equity and residential markets, as well as other forms of wealth. Partly owing to the strength of housing prices and stock market gains, net housing and net equity wealth rose by $3¼ trillion and $2½ trillion, respectively, between end-1995 and 2003Q1 (Figure 2). However, net holdings of non-equity financial wealth rose by even more—by $6¼ trillion over the same period, reaching $21¾ trillion in 2003Q1 and exceeding the value of equities at the height of the stock market in early 2000.3

5. To a large extent, the recent shift in the composition of household wealth represents a return to more traditional portfolio allocations. Between 1969–1996, equity wealth accounted for just under 20 percent of household net wealth, and non-equity financial wealth accounted for almost 60 percent; residential wealth comprised the balance. During the latter half of the 1990s, the share of equity wealth rose sharply—to almost 45 percent at the height of the stock market bubble, but has since fallen sharply to 25 percent, with the proportion of other assets returning to roughly their long-run averages (Figure 3).

B. Long-run Determinants of Consumption and Saving

6. A long-run consumption model is estimated in order to gauge the extent to which the saving rate has deviated from its long-run equilibrium The basic framework is based on the permanent income hypothesis (PIH), which posits that household consumption and saving decisions reflect expected levels of permanent income and wealth.5 Following Lettau and Ludvigson (2001), a long-run relationship is estimated between (the logs of) real consumption services (ct), real household assets (at), and real labor income (, see Appendix for the variable definitions):

where assets are decomposed into residential (ar), equity (ae), and financial non-equity wealth (an).6 The results are reported in Table 1.

7. The results illustrate substantial differences in the “wealth effect,” depending on how the three asset categories are aggregated. The estimated wealth effect—i.e., the impact on consumption of a $1 dollar increase in wealth—ranges from 2–3½ cents. The smallest wealth effects are found if residential wealth is included separately, rather than being combined with another wealth component. In the disaggregated equation, the impact of shocks to equity and residential wealth are relatively small, with the largest effect coming from the non-equity financial wealth term. This large effect could be due to the relatively liquid nature of much of non-equity financial wealth (in the form of demand deposits), which could yield a non-pecuniary return in terms of lower transactions costs, or the possibility that more liquid assets reduce the need for precautionary saving. The importance of this term in the results reported here raises the question whether other studies that have shown a larger wealth effect from residential wealth may have been biased by the omission of non-equity financial wealth.7

8. The regressions where wealth is disaggregated appear to fit the PIH model better than the traditional regression that consolidates all of the wealth terms into one variable. The PIH model used to derive this cointegrating relationship predicts that the coefficients on the income and wealth terms should sum to one. A Wald test of this hypothesis is rejected for the model where all wealth is aggregated into one consolidated term (column 1), but fails to reject the hypothesis for the more disaggregated models. Further, the Akaike Information Criterion (AIC) indicates that the model with consolidated wealth terms fits the data the least well, out of all of the models considered here. Instead, AIC prefers the model that has residential and non-equity financial wealth combined into a composite wealth term.

9. The results also suggest that consumption has exhibited an exogenous upward trend, possibly related to improvements in household access to credit. This result is consistent with the study by Cerisola and De Masi (1999), which focused on the long-run properties of the personal saving rate and identified a downward trend in the saving rate. In their study, the longer-term decline in the saving rate is explained by improved household access to credit.

10. The consumption equation indicates that the personal saving rate is about 1 percentage point lower than the rate determined by fundamentals (Figure 4).8 Since saving is the residual between disposable income and consumption, the fitted values for consumption from the preferred equation (column 3) imply an equation for the saving rate.9 The fitted value of the personal saving rate is calculated at 4½ percent at end-2002, compared with the actual rate of 3½ percent, suggesting that the saving rate was only modestly out of line with prevailing levels of household income and wealth.

C. Does Saving Pose a Risk to the Outlook?

12. Despite the moderate shortfall in personal saving relative to levels determined by income and wealth, any upward adjustment could weigh on the short-term outlook. If saving were to adjust by the full 1 percentage point of disposable income necessary to return the actual rate to its fitted value, the effect would be to reduce GDP growth by around ¾ percentage points.

13. Furthermore, a larger correction in the saving rate remains a risk if the economic recovery disappoints. Because the rise in housing and other forms of wealth has been relatively strong, a slower-than-expected recovery could lead to a continued decline in household wealth and weaker labor market conditions. Net housing wealth, in particular, is vulnerable because a slowing economy could depress house prices—a potential danger because households have borrowed extensively against the value of their homes.11

14. Finally, the trend decline in the saving rate may not continue into the future. As Cerisola and De Masi (1999) highlight, financial innovation has likely allowed households to save less and still achieve the same level of wealth and consumption. If the pace of innovation has slowed or has been nearly completed, the saving rate is unlikely to continue its trend decline.

Not all non-equity financial wealth is liquid. A sizable portion (just under one-quarter, or $5 trillion) is in the form of equity in noncorporate businesses, which could be difficult to sell quickly.

The literature on consumption behavior is large and reviewed in Attanasio (1999).

Stock and Watson (1993) suggest including the leads and lags, which are not reported in Table 1, to address the endogeneity bias in OLS estimates of cointegrating relationships. The Akaike Information Criterion is used to choose the lag length (k=5). The standard errors are corrected as suggested in Hamilton (1994), p. 610.

For example, Case, Quigley, and Shiller (2001) and IMF (2002) use house prices to proxy for residential wealth and include a measure of equity wealth, but do not include a measure of non-equity financial wealth. Indeed, when residential and non-equity financial wealth are combined into a single variable (column 3, Table 1), the composite wealth term is about 5 times the coefficient on equity wealth.

The FM-OLS results from Cerisola and De Masi (1999) were duplicated using data from this paper, with the personal saving rate a function of: wealth to income ratios, the general government fiscal balance, and Social Security and Medicare transfers. These results suggest an “equilibrium” saving rate of 5 percent, only somewhat higher than estimated by this paper.

The components in Figure 5 may not sum to the total changes in the personal saving rate because the equation in (1) does not lend itself to a close-form solution for the saving rate, and because the trend term and residual terms are not included in the chart.

Changes in the Personal Saving Rate

3-year change in selected components of the saving rate 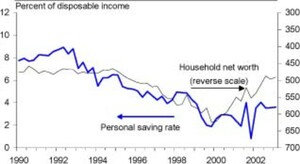 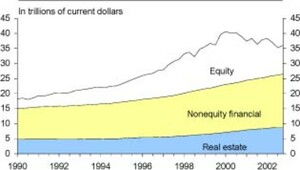 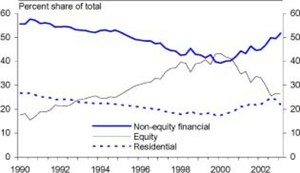 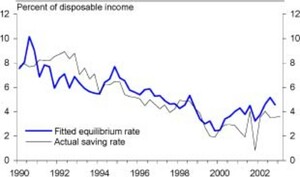 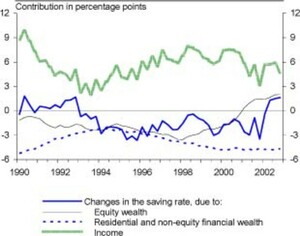