III. Estimating Potential Growth and Output Gaps for the Netherlands21

71. During the 1990s, the Dutch economy outperformed the euro area and was almost on a par with the United States (Figure III-1 and Table III-1). This robust performance was mainly a result of high trend employment growth. One key contributing factor was the expenditure-based fiscal consolidation program, which led to cuts in both the deficit and the tax burden. Labor market participation and employment were stimulated by cuts in taxes and social contributions, as well as by significant wage moderation and lower benefit replacement rates resulting from structural reforms.

72. Since 2000, growth in the Netherlands has fallen sharply, in line with the euro area and the U.S. The slowdown has, however, been especially marked in the Netherlands: GDP growth was only 0.2 percent in 2002—one of the lowest in the euro area—and GDP could decline in 2003. This has raised concerns about the fixture course of the Dutch economy. Is the recent decline just a cyclical phenomenon, or the beginning of a more protracted slowdown? Looking ahead, as the population ages, sustaining the high employment growth of the past decades seems difficult without substantial structural reforms to further increase labor-force participation and employment rates.

74. The remainder of the chapter is organized as follows. Section B describes the empirical methods and data used for estimation, and discusses the benefits and weaknesses associated with each method. Section C presents the estimation results.

75. Hodrick-Prescott (HP) filter. Deriving potential output using the HP filter is a popular procedure because of its flexibility in smoothing fluctuations in output (Hodrick and Prescott, 1980). However, results from the HP filter are sensitive to the smoothing parameter λ, the choice of which is arbitrary, leading to at times excessive smoothing of structural breaks.22 Moreover, the HP filter is known for its high end-of-sample biases, because the weights in the HP filter change rapidly near the ends of the sample. This could result in substantial distortions of the trend at the end of the sample, just when an accurate estimate is most valuable.

76. Ideal band-pass filter (Ouliaris filter). Band-pass filtering selects components of the time series with periodic fluctuations between 6 and 32 quarters, while removing components at higher and lower frequencies (Baxter and King, 1999). Most recently, Ouliaris and Corbae (2002) propose an “ideal” band-pass filter based on Monte Carlo simulations. Compared to the Baxter-King filter and the HP filter, the Ouliaris band-pass filter is considered to be statistically consistent in the sense that the filtered series asymptotically converges to the true growth cycle.

77. Under this approach, potential output is estimated using a simple two-factor Cobb-Douglas production function (for example, see EC, 2002). In particular, our estimation of potential output growth is based on the trend growth of (i) the capital stock; (ii) the labor input based on an NAIRU estimate, a trend labor participation rate, and working-age population growth; and (iii) TFP estimates based on two alternative assumptions about the labor’s share (0.6 and 0.8).

78. The production function approach is very similar to detrending methods, in that the components of the production function are smoothed, in this case using an HP filter (with λ=100). It nonetheless provides useful information on the determinants of potential growth. Labor and capital inputs my be incorrectly measured due to labor-hoarding and changes in capacity utilization, as these are both cyclical in nature. However, using full-time equivalent employment and a net capital stock series adjusted for capacity utilization yield very similar results.23 Finally, since the capital stock data are only available for the business sector, we also estimate potential growth for this sector alone. This turns out to be only slightly higher than the estimated potential growth for the whole economy (Figure III-3 and Table III-2).

79. The following unobservable component (UC) model was proposed by Apel and Jansson (Apel and Jansson, 1999) to jointly estimate the potential output and NAIRU:

80. The idea behind this method is to provide a economic structure by linking output gaps to unemployment gaps through Okun’s Law (equation 2), and both to changes in inflation through the Phillips curve (equation 1). For estimation, the Kalman filter and maximum likelihood method are used to obtain the estimates of the unknown parameters and of the unobserved variables, i.e. potential output and the NAIRU. Also included in the Philips curve equation are four variables to capture supply shocks: import prices, the oil price (both deflated by the CPI), the real exchange rate, and labor productivity. In addition, a dummy variable captures the impact of the structural reforms which took place in mid-1990s. Finally, in equation 2, a lagged employment gap is included to capture the effect of labor hoarding.

81. Seasonally adjusted quarterly data are used for all variables for the period of 1970:1-2003:4, except for the production function approach, where annual data for 1970–2004 are used.

82. Potential GDP growth rates derived from these methods prove very similar over the whole sample period of 1977–2003. They range from 2.1 to 2.4 percent, against the actual average growth of 2.3 percent during this period (Table III-2). However, the estimates for the short-run do vary considerably. Estimates based on the production function approach show that the higher potential growth during the 1990s, relative to 1980s, was a result of high trend employment growth (associated with a declining NAIRU) and trend capital accumulation, offsetting a decline in trend TFP (see Figure III-4). Assuming unchanged trend growth for TFP and capital stock accumulation, to sustained the output growth at 2¼ percent would require an employment growth of about 2 percent per year.

83. All methods used yield similar estimates of the location of cyclical peaks and troughs (Figures III-5 and III-6). Cyclical developments (measured by the deviation between actual output and unemployment from potential output and the NAIRU, respectively) generated by the Apel-Jansson model are illustrated in Figure III-6. Overall, the Apel-Jansson approach is found to yield larger economic fluctuations (reflected in the larger output gaps), compared to other three methods. This result is consistent with previous studies.24

84. Overall, the evidence suggests that the large positive output gap, notably in 1999 and 2000, either closed in 2002 or will close in 2003. The various methods produce a range of results for output gaps as expected. Estimates based on the HP filter are sensitive to the choice of the smoothing parameter λ and the end point of the sample. Using the HP filter, the Ouliaris filter, and the production function approach, the Dutch economy fell to its potential in 2002, while Apel-Jansson estimation implies that the gap closes in 2003. Specifically, estimates of the output gap for 2002 range between 0.9 percent below potential (using Band-Pass filter) to 2.4 percent above potential (using the Apel-Jansson multivariate method), compared to the CPB estimate of zero gap and the OECD estimate of-1 percent.

Consequently, there have been attempts to identify the “optimal λ,”, but in our case the identified “optimal λ (λ=374)” is associated with small output gaps through out the whole sample period (Table III-2).

Note that using the capacity adjusted capital stock did generate a much smoother TFP series. 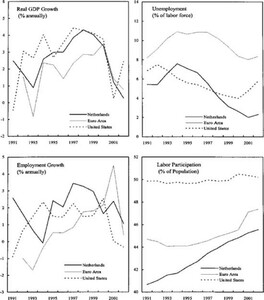 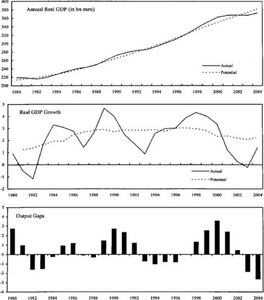 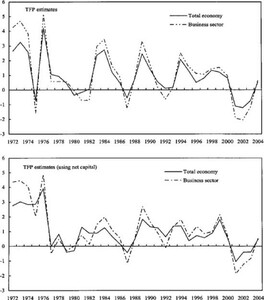 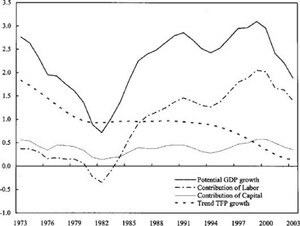 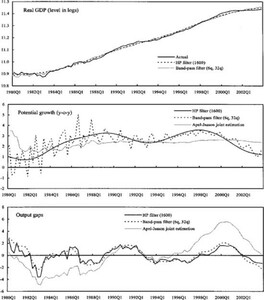 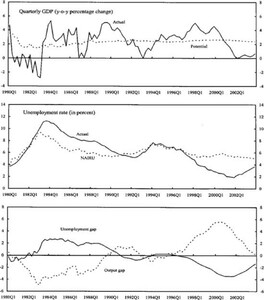