This paper analyzes the historical and current energy booms of Trinidad and Tobago, and points out the main policy issues during boom times. It provides practical suggestions on the long-term management of the expected resource windfall in Trinidad and Tobago, and outlines theoretical guidelines to calculate sustainable consumption out of energy wealth and targets sustainable levels of non-energy fiscal deficits. It discusses the developments, main policy issues in the state-owned nonfinancial enterprise sector, and the proposed restructuring plan for the state sugar company. It also provides a Statistical Appendix for Trinidad and Tobago.

This paper analyzes the historical and current energy booms of Trinidad and Tobago, and points out the main policy issues during boom times. It provides practical suggestions on the long-term management of the expected resource windfall in Trinidad and Tobago, and outlines theoretical guidelines to calculate sustainable consumption out of energy wealth and targets sustainable levels of non-energy fiscal deficits. It discusses the developments, main policy issues in the state-owned nonfinancial enterprise sector, and the proposed restructuring plan for the state sugar company. It also provides a Statistical Appendix for Trinidad and Tobago.

39. In Trinidad and Tobago, the state-owned enterprises (SOEs) play a significant role in the national economy. The extent of government ownership of various SOEs in different sectors is shown in Table 1. With the exception of a few, most of the SOEs incur losses requiring transfers from the central government for their operational expenditures, in some cases for debt service, and are dependent on debt guaranteed by the government. Some of the SOEs carry out large infrastructure projects on behalf of the government financed through commercial loans guaranteed by the government. Most of these capital expenditures are off-budget.

40. The main policy issues related to SOEs are reviewed and we conclude that: (i) the current management system for the SOEs has resulted in operational losses and a lack of fiscal transparency, thereby increasing SOE dependence on the government, and (ii) there is a need to define the reform process within a specified timeframe to enable the SOEs to become economically efficient, more accountable, transparent, and amenable to private participation.

B. Government Policies on SOEs

41. Since the time of the country’s independence (1962), as part of an import-substitution based industrialization strategy, the government legislated the formation of over 50 SOEs aiming to increase domestic production of goods and services. Overtime, SOE operations expanded nearly into all sectors, including energy, financial, manufacturing, transport, electricity, and water services. Investment by SOEs was equivalent to 8 percent of GDP by 2002, having doubled since 1991. This mainly reflected capital expansion in the energy sector. SOE’s savings on average was less than 4 percent of GDP over the same period (Figure 1).

42. The government’s intervention in the SOEs has mainly been through fixing market prices for products and services, and protecting their market share by restricting entry of other firms. For example, the Regulated Industries Commission (R1C) determines the water and electricity tariffs, while the ministry of energy regulates fuel prices. Market access to strategic services was restricted by issuing licenses, imposing import controls, and subsidizing goods and services.

C. The Financial Performance of SOEs

43. SOEs performance has been suboptimal as operational losses have risen due to a number of factors: absence of operational frameworks, unclear and contradictory goals, bureaucratic procedures, lack of sufficient working capital, overemployment with relative higher wages, non-commercial management approach, inability to respond to market signals, and frequent government intervention.

44 The SOE overall deficit averaged 2¼ percent per year between 1997 and 2002, partly reflecting low revenues and high current expenditures. Preliminary estimates for FY 2003/04 indicate further deterioration in the overall deficit to 5 percent of GDP, due to user charges being below the economic breakeven level, and higher average operational costs. The main contributors to operational losses are the sugar company, CARONI and the water utility, WASA. CARONI’s operational losses averaged about ¾ percent of GDP per year from 1999 to 2002 period. Financial performance was weak partly due to the workforce, whose wages are roughly double those of Brazilian sugar cane workers. WASA operating losses averaged ½ percent of GDP per year during 1999 to 2002 period, largely due to inefficiency in operations and low user charges.

45. Over time, documented operational frameworks between government and the SOEs and among the SOEs themselves have become outdated resulting in a weak performance monitoring system, and reduced transparency. This has been exacerbated by the government’s increased reliance on SOEs for implementing a number of large infrastructure projects, while circumventing procurement rules.

46. Since 1990, the government’s reform in the nonfinancial public enterprise sector has not realized the desired objectives. Recently, a Junior Finance Minister was appointed to manage the reform program in order to expedite the process of decision making and limit the risk of overlapping powers. Three major divisions were established to focus on monitoring public enterprises, divestment, central audit and an appeals tribunal. A “State Enterprise Performance Monitoring manual” to document structured and systemic functions of roles and relationships of the government and the SOEs was compiled (Box 1).

47. In 2002, the government presented to parliament a policy statement on privatization whose main objectives are to divest management and ownership of SOE with preference for local investors. Plans indicate divesting management and retaining ownership in the Port of Spain Ltd. and Port of Spain Infrastructure Company Ltd. They plan to offer management contracts on Destination Trinidad and Tobago Ltd, Trinidad and Tobago Inter Island Company Ltd, Port of Spain Dredging and Towing Services, Port Scarborough Cargo Handling, and CARICOM Wharves.

The State Enterprise Performance monitoring manual outlines the role of line ministries to set policy frameworks for the state enterprises, while the ministry of finance monitors on a macro level the SOEs financial performance. The main features include:

48. The government is divesting its ownership in selected SOEs through management and employee purchases or through the National Enterprise Limited (NEL) listed on the stock exchange. The arrangement involves NEL purchasing government shares in SOEs and selling NEL shares to the private sector. This enables profitable and non profitable enterprises to be sold as a package.

50. While the government plans to expedite divestment in selected SOEs, the reform process can be more transparent and more focused to meet government objectives. A stylized framework, based on empirical studies on public enterprise reform, is helpful to define the scope and sequence of the reform process (Box 2).

51. The first level of reforms should enhance the role of the market in economic decisions in order for the SOEs to improve performance thereby reduce the adverse fiscal impact, and efficiently distribute resources. This would imply that fair and open competition should be encouraged by decontrolling tariff rates for public goods and services, liberalize restricted markets particularly in fuel retailing, water, electricity and telecommunications services, and eliminate direct and indirect preferential support from the government.

52 The second level of reform should be to rationalize the entire public enterprises sector. The criteria and timeframe for divesting management or ownership should be explicitly defined to establish credibility and to win support of groups involved in decision making and those affected. Based on empirical studies, four categories to group SOEs have been suggested (Box 3):

53 The third level of reform should be to rationalize the distribution of decision making of the government and the enterprise. This would include separating commercial, noncommercial and regulatory functions, and restructuring capital, management and the labor force as necessary.

54. The fourth level of reform would be to restructure the enterprises. The governments ownership functions over majority owned public enterprises include the same rights and responsibilities as the functions in the private sector. In its ownership role, the government should - select and appoint competent and qualified persons to enterprise boards according to a widely publicized and transparent process, provide enterprise managements with clear, non conflicting objectives; agree with managements on the strategies and corporate instruments reflecting it; leave management as free as needed to achieve the objectives; oblige management to full and transparent accountability; and perform ex-post evaluations of management performance.

55. The authorities could strengthen the public sector reform by explicitly defining the scope, timeframe and sequence of the reform process. The immediate approach should be to establish an enabling environment through enhancing the role of the market in economic decisions. This would facilitate the development of a divestment program for the entire SOE sector based on groups with similar features for action. Fiscal transparency could be improved by separating noncommercial and regulatory functions from the SOEs, while restructuring the SOEs to become viable enterprises. 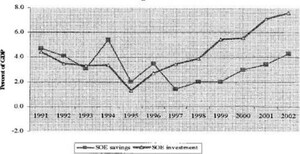 Powered by PubFactory
Close
Source: Based on Morris Bornstein, 1999 “Framework Issues in the Privatization Strategies of the Czech Republic, Hungary and Poland”