This 2002 Article IV Consultation on Portugal highlights that after an extended strong economic expansion, the GDP growth stalled in 2002 and, at 0.5 percent, fell below the euro area average for the first time in almost a decade. The growth slowdown reflected a broad-based decline in domestic demand as households began to adjust to high indebtedness levels and a deteriorating employment outlook. Investment continued to fall amid slowing demand prospects and rising global and domestic uncertainty. The weakness in domestic demand led to a decline of imports.

This 2002 Article IV Consultation on Portugal highlights that after an extended strong economic expansion, the GDP growth stalled in 2002 and, at 0.5 percent, fell below the euro area average for the first time in almost a decade. The growth slowdown reflected a broad-based decline in domestic demand as households began to adjust to high indebtedness levels and a deteriorating employment outlook. Investment continued to fall amid slowing demand prospects and rising global and domestic uncertainty. The weakness in domestic demand led to a decline of imports.

On March 26, 2003, the Executive Board of the International Monetary Fund (IMF) concluded the Article IV consultation with Portugal.1

After an extended strong economic expansion, GDP growth stalled in 2002 and, at 0.5 percent, fell below the euro-area average for the first time in almost a decade. The growth slowdown reflected a broad-based decline in domestic demand as households began to adjust to high indebtedness levels and a deteriorating employment outlook. Investment continued to fall amid slowing demand prospects and rising global and domestic uncertainty. The weakness in domestic demand led to a decline of imports, while exports are likely to have increased somewhat faster than foreign demand. These external trade developments contributed to a narrowing of the external current account deficit, but the deficit (including capital transfers) remained one of the largest (in relation to GDP) among industrial countries.

In the financial sector, credit growth decelerated significantly in 2002, although it again exceeded nominal income growth. With housing credit demand remaining relatively strong prior to the abolishment of the interest subsidy at end-September, private sector indebtedness levels continued to rise and bank credit (in relation to GDP) is well above the euro-area average. The credit expansion has outstripped the growth in core deposits, and banks have continued to finance themselves extensively on international capital markets.

The fiscal deficit declined markedly in 2002 to an estimated 2.7 percent of GDP, following substantial slippages in the previous year that had pushed the 2001 deficit to 4.2 percent. The decline in 2002 came against the background of weak growth, and the structural deficit reduction was the largest recorded during the past decade. This reflected sizable adjustment measures introduced by the newly elected government, which took office in April 2002, including an increase in the standard VAT rate, a freezing of some capital expenditures, and one-off revenue measures of about 1.5 percent of GDP, related to asset sales and revenues from a tax amnesty. The 2003 budget envisages a decline in the fiscal deficit to 2.4 percent of GDP, but staff estimates that substantial, additional measures need to be implemented to achieve the target. The updated Stability Program confirms budget balance as a medium-term objective.

Directors welcomed the determined efforts by the new government to address Portugal’s current economic difficulties through actions to reverse fiscal slippages as well as carry forward structural reforms. These actions, together with adjustments by the private sector, had begun to correct the large macroeconomic imbalances in the economy; in particular, the rise in relatively high household indebtedness levels had decelerated; the fiscal deficit had been reduced substantially; and the current account deficit had declined, although it was still one of the largest among advanced economies. Directors observed, however, that substantial challenges remain in all these areas. They emphasized the importance of steady progress on fiscal and structural reforms for overcoming the sharp decline in economic growth and rise in unemployment, strengthening competitiveness, and raising living standards toward EU average levels.

Directors commended the authorities for achieving a substantial reduction in the fiscal deficit in 2002—the largest fiscal adjustment in Portugal in many years—despite an environment of weakening economic growth. They noted that the adjustment relied extensively on one-off measures (including both asset sales and a tax amnesty), but recognized that this reflected importantly the sheer magnitude of the slippage in 2001 and also the limited time remaining in 2002 after the new government had assumed office.

Directors stressed the need for further fiscal consolidation in 2003, as envisaged in the budget targets. They emphasized that the quality of fiscal adjustment is crucial to ensure a relatively smooth unwinding of the macroeconomic imbalances, and called for quickly replacing the one-off measures with durable expenditure reductions.

Directors expressed concern that the fiscal measures identified so far might not be sufficient to achieve the budget targets for 2003. They welcomed the recent steps to curtail the public sector wage bill, which is (in relation to GDP) well above EU levels, and stressed the importance of proceeding with plans to slow the growth in health care and social security spending. Notwithstanding this progress, Directors stressed that additional measures need to be implemented early to secure progress on fiscal consolidation. Many Directors emphasized the importance of meeting the budget targets and favored frontloaded adjustment, especially for fostering confidence.

Concerning the medium term, Directors considered the Stability and Growth Program’s objective of expenditure-based fiscal consolidation and achieving structural budget balance by 2006 as broadly appropriate. Directors underscored that this strategy would strengthen public saving and free up resources for the tradable sector, thereby facilitating further reduction of the external current account deficit. Sustainable progress on fiscal consolidation would require containing aging-related expenditures, and Directors welcomed plans to address these issues early in the present legislature. Directors also emphasized, in this connection, that tax cuts should not be undertaken until adequate expenditure savings have been identified. They also stressed the importance of strengthening budget planning and control, and encouraged the authorities to adopt a multi-year framework for the budget process.

Directors welcomed the recent steps to improve the resilience of the financial sector, including ongoing improvements in banking supervision, the extension of the maturity structure of banks’ funding instruments, and the strengthened capital bases at some institutions. A few Directors also observed that financial institutions continued to be profitable. Nevertheless, Directors referred to continued risks, as loans were concentrated in sectors with weak growth prospects, and credit growth—although declining—continued to outpace deposit growth.

Directors underscored that financial sector risks warrant continued supervisory vigilance. They welcomed the recent acceleration of specific credit provisioning requirements, but noted that these steps had been accompanied by a relaxation of general provisions for mortgage loans. A number of Directors recommended actions to improve the definition of nonperforming loans and the system of loan loss provisioning, with a view to facilitate forward-looking risk assessments. A number of other Directors, however, observed that the present provisions are in line with practices in other countries, and welcomed recent steps that would allow the Bank of Portugal to impose an increase in provisions based on banks’ auditor reports. Directors also called for closely monitoring the insurance sector and pension funds, where, as in many other advanced economies, performance had deteriorated. Directors welcomed the interest of the authorities to review financial sector issues in the context of a Financial Sector Assessment Program in the near future, and stressed the usefulness of this exercise. Directors commended the authorities’ recent measures to combat money laundering and the financing of terrorism, in line with EU guidelines.

Directors welcomed recent initiatives aimed at liberalizing product and labor markets and strengthening competition. They noted that steps in these areas could raise Portugal’s relatively low productivity level and improve external competitiveness, which would be critical for durable income convergence to EU levels. They also welcomed recent initiatives to create a new, independent competition authority and reform the labor code. In this regard, they stressed that an easing of Portugal’s relatively severe dismissal restrictions would facilitate reallocations toward the tradable sector and have a positive effect on private sector productivity. Directors also suggested that more emphasis in education and training would improve labor productivity.

Directors welcomed progress in improving the timeliness and coverage for some fiscal data, but expressed concern that policy decisions are still hampered by long-standing statistical weaknesses in several areas. They encouraged the authorities to address these shortcomings promptly.

Directors encouraged the authorities to support the full liberalization of imports from the least developed countries and to raise official development assistance to the UN target. A number of Directors called on the authorities to work in favor of a reform of the EU’s Common Agricultural Policy, contributing to the success of the Doha trade round.

Public Information Notices (PINs) are issued, (i) at the request of a member country, following the conclusion of the Article IV consultation for countries seeking to make known the views of the IMF to the public. This action is intended to strengthen IMF surveillance over the economic policies of member countries by increasing the transparency of the IMF’s assessment of these policies; and (ii) following policy discussions in the Executive Board at the decision of the Board. The Staff Report for the 2002 Article IV Consultation with Portugal is also available. 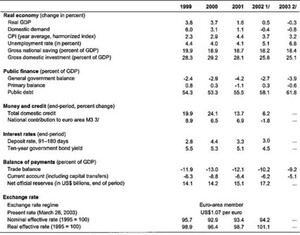