51. This section presents an empirical analysis of the degree of exchange rate pass-through to the consumer price level in South Africa. In particular, the section focuses on the pass-through over the time horizon of monetary policy (around two years).34 The South African Reserve Bank (SARB) has moved to an inflation-targeting framework, and 2002 is the first year in which it must achieve an explicit inflation target; however, this task has been complicated by the rapid depreciation of the rand in the last quarter of 2001, which has resulted in a pickup in CPIX inflation in early 2002.35

52. The important question for the SARB is to what extent, and how quickly, the exchange rate depreciation in the last quarter of 2001 is likely to pass through to consumer prices.

54. The rest of the section is organized as follows: subsection B describes the model and the estimation methodology; subsection C reports the impulse response analysis and calculates pass-through elasticities at different time horizons for CPIX; and subsection D concludes.

B. Model and Estimation

55. The model is taken from McCarthy (1999) with prices set at each of three different stages in a stylized distribution chain - import, production, and consumption - for goods and services. In addition, the model controls for oil prices by including an oil price equation (in U.S. dollars); fluctuations in the output gap by including an output gap equation; and for the exchange rate. The ordering of the variables determines the sequence in which the different shocks-oil, output gap, exchange rate, import-price inflation, producer price inflation, and consumer inflation - are transmitted at time t through the system. In this model, oil price and output gap shocks are assumed to be most exogenous, and so the oil inflation equation is ordered first followed by an output gap equation. Next, the nominal effective exchange rate equation is included, followed by the three price inflation equations in the sequence mentioned above. This ordering means that an oil price shock affects all other variables in the system at time t, but shocks to other variables affect oil prices in South Africa with a lag of at least one period. By the same logic, within the period, output gap shocks affect all variables ordered after it, but not oil price inflation.37

56. The model is estimated as a vector autogression (VAR) so that all variables are considered endogenous. All variables are in logarithms. To deal with the problem of nonstationarity, they are expressed in first difference, except for the output gap, which is stationary.

57. The pass-through of exchange rate fluctuations to CPIX at time t is calculated using the following ratio:

58. An initial shock to the nominal effective exchange rate feeds through to the level of CPIX gradually, with the rate of increase slowing over time (Figure III.1. and Table III.1). This deceleration is also observed in pass-through profiles for import and producer prices. More than half the pass-through is seen by the first year, and it reaches approximately 12 percent eight quarters after the shock. Choudhri and Hakura (2001) find pass-through in South Africa to be 7 percent after two years for headline CPI, an estimate that is somewhat lower than the 12 percent found in this study. However, both estimates suggest that pass-through over the monetary policy horizon has, on average, been moderate.

59. Results from the VAR analysis suggest that the pass-through is relatively low over the two-year horizon when the SARB monetary policy tool, the repurchase rate, has most impact on inflation. Based on these results, the impact of currency depreciation in the fourth quarter of 2001 on inflation over 2002 and 2003 may be moderate. However, the degree of pass-through during any particular episode of currency fluctuations will depend fundamentally on the source of the shock. Therefore, it is important to identify the source of the exchange rate shock before taking a view about the expected degree of pass-through and setting the appropriate stance for policy. For example, an increase in the rate of growth of South Africa’s money supply relative to the rest of the world would be expected to result in depreciation pressure on the nominal exchange rate (other things equal), and eventually pass-through into higher domestic prices. Conversely, a real shock such as a slow down in total factor productivity growth in South Africa relative to the rest of the world, would be expected to result in a depreciated real exchange rate either via a lower nominal exchange rate, or via a combination of a depreciated nominal exchange rate and lower domestic prices vis-à-vis its trading partners.

In South Africa, the policy interest rate—the repurchase rate—is estimated to have maximum impact on future inflation at about the two-year horizon. See Box 1 in the South African Reserve Bank (2001).

As a robustness check, the exercise was repeated for core CPI, and headline CPI, and it was found that the pass-through profile was not significantly different from the results for CPIX.

The estimated pass-through coefficients were very similar across different orderings of the variables, indicating that the chosen model ordering is robust to alternatives.

Pass-through in the CPIX Inflation Model 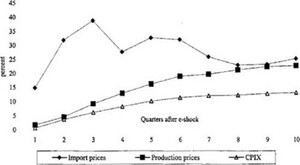