24. In February 2000, South Africa adopted an explicit inflation-targeting strategy for monetary policy. The CPIX17 inflation target was set at 3–6 percent (annual average) in 2002 and 2003, and then at 3–5 percent in 2004 and 2005. This change in policy regime comes after a period of disinflation in the 1990s when annual inflation fell from 18 percent in 1991 to 7 percent in 1998. Over the same period there were large fluctuations in money growth and the exchange rate. This section analyzes the relationship between money, prices, and the exchange rate in South Africa using an economic model which incorporates three relationships - money demand, a markup model of the level of CPLX, and the real exchange rate - that together provide an analytical framework for examining the forces that explain the historical fluctuations in the money supply, the real exchange rate, and the level of CPIX.

25. A number of policy issues are discussed as part of the analysis including whether there continues to be a stable relationship between money and prices, so that, potentially, this information can be used to assess the prospects for CPIX inflation. This section also tests whether cost-push factors help to explain CPLX inflation in South Africa. A stable long-run relationship would suggest that policymakers should take into account unit labor costs and production prices when assessing the prospects for CPLX inflation. This section also tests for a real exchange rate relationship so that the role of foreign shocks, which should play an important role in an open economy such as South Africa, is incorporated into the model.

26. This analysis begins by testing whether there exist stable, long-run (cointegrating) relationships for money demand, the real exchange rate and a markup model of CPLX using the Johansen (1988) cointegrating vector autoregression (CVAR) methodology; it then examines the short-run deviation of real money balances, the level of CPLX, and the real exchange rate from their long-run paths given by the cointegrating vectors (see Table II. 1 for the cointegrating vectors).18 An analysis of the short-run deviations reveals that significant excess money balances were building from late 1998, and were associated with an undervalued real exchange rate (relative to its long-run value) and a level of CPIX that was higher than suggested by total unit costs of production. Finally, impulse response functions are examined for three different shocks to assess the model’s dynamic properties.

27. The rest of the section is structured as follows: subsection B discusses money demand, the real exchange rate, and the markup model, including a brief survey of some earlier literature; subsection C discusses the methodology, the data and the main results; and subsection D concludes.

B. Background and Theory

28. This section builds on previous work in a number of ways.19 First, the analysis extends into the latest available data, which include the period of considerable financial market volatility seen in emerging markets during the Asian financial crisis. This allows a test of whether this period of volatility, especially in the rand exchange rate, led to instability in the estimated long-run relationships, or whether the impact was temporary, resulting in short-run (temporary) deviations of real money balances, prices and the real exchange rate from their long-run path. Second, this section tests whether the markup model explains the level of CPIX and third, it uses the CPIX as its measure of consumer prices, because the inflation target in South Africa is expressed in terms of CPIX inflation.

29. The theory underpinning each of the three long-run structural relationships is briefly discussed below:

30. The building blocks of money demand theory suggest that the demand for real money balances are a function of a scale variable (y in equation 1) that captures the transactions demand (e.g. real GDP) and the opportunity cost of holding money captured by an appropriate interest rate, R:

31. In the empirical literature a number of refinements have been made to the basic model when using a broad measure of money, such as M3, to include a variable that captures the own rate of return, rown, on those elements that are interest bearing.20 Because data on the bank deposit rate is available only since 1980, the three-month treasury bill rate is used as a proxy for the own rate of return, rown, because the two interest rates are highly correlated.21

32. Recent studies of money demand in South Africa (see DeJaeger and Ehlers (1997); Jonsson (2001); and Hurn et al. (1992), find that broad money (M3) rather than narrow money has a stable relationship with prices and is a better leading indicator of inflation.

33. The PPP model suggests the following relationship (all variables in logarithms):

35. This relationship states that, in the long run, the general level of prices is a stable markup over total unit costs. Fedderke and Schaling (2001) find evidence for a markup relationship linking output prices (measured using the GDP deflator) to total costs in South Africa with the average markup approximately three times that in the United States.

37. A number of inferences can be made from the table.27 The finding of a stable long-run real money demand relationship supports the hypothesis that money and prices move together in the long-run in South Africa.28 All the variables have the correct signs in the real money demand equation (model 1), and the income elasticity with respect to real money balances is0.55, suggesting that, in the long run, there are economies to scale to holding real money balances for transactions purposes. Both the own rate of interest, rown, (three-month treasury bill rate) and R, enter the real money demand equation with the expected signs, indicating that the demand for interest-bearing components of M3 increases with the return on short-term bonds, while the opportunity cost of money rises as the return on longer-term bonds increases.

38. Model 2 is a stable long-run relationship between the price level (CPIX) and total unit costs. Moreover, the restriction of static linear homogeneity was accepted (λ+κ=1 in model 2), indicating that prices in the long run increase in proportion with total unit costs.

39. Model 3 is a stable real exchange rate relationship. However, the restriction of purchasing power parity (PPP) is not accepted by the data, a finding similar to numerous other studies that test for PPP, and is consistent with the fact that the long-run real exchange rate has been on a depreciating trend over the sample period studied in this paper.

Testing the stability of the estimated long-run economic relationships

40. The literature on the empirical modeling of money demand generally finds that periods of structural change caused, for example, by financial liberalization have rendered money demand unstable across a wide range of countries (see Ericsson, 1998 and Sriram, 2000, for a survey).

43. Recursive estimates of the markup parameters are also stable, suggesting that, in aggregate, the long-run markup over unit costs has been stable.

Deviations from the long-run path

44. At any point in time, real money balances, CPIX, and the real exchange may deviate from their respective long-run paths, but the vector error-correction mechanism (VECM), which govern the dynamics of the model, ensures that these deviations are temporary30. Towards the end of the sample, real money balances were approximately 30 percent higher than their estimated long-run value, suggesting the presence of “excess money” in the economy (Figure II.4). At the same time, the real exchange rate was approximately 25 percent below its long-run value (Figure II.5)31, and the level of CPIX was about 3 percent above its long-run level consistent with the level of total unit costs (Figure II.6).

45. The model cannot be used to draw a causal link between excess money balances, on the one hand, and an undervalued real exchange rate on the other hand, but because the three long-run relationships are identified within the same model, they are jointly determined in a general equilibrium framework. Moreover, over this period, excess real money balances and an under-valued real exchange rate were associated with CPIX above its long-run value. Therefore, when taken together, a plausible interpretation would be that excess money was putting pressure on the exchange rate and, together, they resulted in upward pressure on the price level.

46. The impulse response analysis provides information about the dynamic properties of the VECM and serves two purposes. First, it complements the previous discussion by revealing how variables respond to economic shocks that may, in the first instance, cause them to deviate from their long-run path. Second, it is another check on the model’s economic interpretability. In the following analysis, three shocks are considered (each is one standard error in size): a shock to real money balances, a shock to the nominal effective exchange rate, and a shock to unit labor costs. Each impulse response has an interpretation consistent with economic theory.

47. While a shock to real money balances can originate from a number of sources, based on the dynamic responses of the other variables, the shock in Figure II.7 should be interpreted as an exogenous increase in the demand for real money balances.32 In response to this shock, short-term interest rates rise, reflecting a tightening of monetary conditions (the liquidity effect), and, via the expectations theory of the term structure of interest rates, there is a smaller increase in long-term rates, R - the yield curve inverts. The response of output is statistically insignificant over the impulse response period and is not included in Figure II. 7.

48. An increase in the nominal effective exchange rate, e, (an appreciation) results in a permanently lower level of CPIX, which adjusts to its new long-run level only gradually (Figure II.8).

The level of CPIX increases in response to a positive shock to unit labor costs. Producer prices increase in the short-run, but then settle to their initial value in the long run (Figure II.9). The rise in unit labor costs is matched by the rise in CPIX, which is consistent with the finding of long-run static homogeneity between total unit costs and CPIX.

50. From a policy perspective, the results indicate that real money balances continue to be important for understanding long-run developments in the money market in South Africa and that money should be incorporated into any analysis of the prospects for CPIX inflation. The results also show that cost-push factors have played an important role in the determination of CPIX, and that, on average, shocks to the nominal exchange rate have tended to result in a permanent change in the level of the real exchange rate, and an improvement in external competitiveness.

If a set of (nonstationary) variables are cointegrated, then there exists an equivalent error-correction representation that characterizes the tendency of the system to converge to its long-run path.

See Jonsson (2001), and DeJaeger and Ehlers (1997) for previous studies which focus on some of the issues discussed in this section.

The correlation between the bank deposit rate and the 3-month treasury bill is0.91 for the period 1980–2000.

Bhundia (see section III of the selected issues paper) and Choudhri and Hakura (2001) find only partial pass-through to consumer prices for South Africa.

In this context, homogeneity assumes a constant markup over total unit costs in the long-run so that the level of CPIX increases (decreases) by the same proportion as the increase (decrease) in total unit costs.

γ and κ are elasticities that relate CPIX to unit labor costs and producer prices, respectively.

A time dummy from 1994Q1 to 2001Q2 was included as an unrestricted variable to capture the change in regime in 1994 following the end of apartheid,

In the early part of a recursive estimation exercise, the estimated parameters are more likely to appear unstable when the data sample is short and there are low degrees of freedom. However, the degrees of freedom constraint eases with each successive recursive estimate, and so the absence of a shift in the latter part of the sample period suggests the estimated parameters are stable.

The VECM estimates are reported in the appendix.

Money is demand determined in South Africa as the SARB (South African Reserve Bank) sets a policy interest rate and not the supply of money.

Recursive Estimates of the Parameters in the Markup Relationship

Impulse Response Analysis in the Monetary System: A Shock to Money Balances

The Response of CPIX to a Shock to Unit Labor Costs 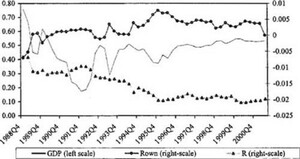 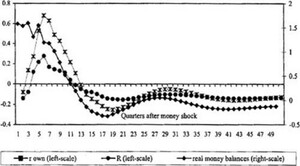 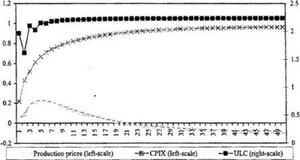