I. An Assessment of the Real Exchange Rate in Romania1

1. The current monetary policy in Romania is focused on promoting gradual disinflation without putting external competitiveness at risk. In conducting monetary policy, the National Bank of Romania (NBR) primarily employs the exchange rate as a nominal anchor. In choosing the exchange rate path, the NBR seeks to strike a balance between taming inflation and avoiding unwarranted real appreciation, which might arise if other policies are not supportive. If the real exchange rate overshoots its long-run level, external competitiveness is negatively affected and the exchange rate becomes unsustainable. Therefore, assessing the real exchange rate, and in particular, trying to determine if the actual rate is over- or undervalued relative to its long-run level, is a crucial issue for conducting monetary policy in Romania.

7. In the literature, the following variables have been identified that can influence the real exchange rate in the Iong-run:6 (a) relative income levels; (b) the productivity differential between a country and its main trading partners; (c) net capital inflows; and (d) the terms of trade. Figure 2 shows the evolution of these variables in Romania over the past decade.

9. The Balassa-Samuelson hypothesis states that if a country’s productivity gains in the tradables sector outpace those in the nontradables sector relative to its trading partners, the relative price increase in nontradables would give rise to real appreciation. Although this effect would also be associated with a rise in the country’s relative income, this paper investigates the Balassa-Samuelson effect separately by directly employing the productivity differential between Romania and its main trading partners in the tradables sector.

12. According to Lane and Milesi-Ferretti (2002), the estimation of a long-run exchange rate path includes the following steps: (a) testing for the presence of unit roots in the data series; (b) testing for the existence of a cointegrating relationship; and (c) estimating the cointegrating relationship. The data are annual over the period 1991-2001. The real effective exchange rate is CPI-based, with weights set according to Romania’s trading pattern in 1995. Relative GDP per capita is measured as Romania’s real GDP per capita in PPP terms relative to the trade weighted real GDP per capita of its main trading partners9. Total productivity in the tradables sector is proxied by using labor productivity because reliable capital stock data, as well as capital utilization rates, are not available for Romania. Labor productivity for the industrial sector over the past decade is provided by the National Institute for Statistics in Romania. The productivity differential is then calculated as the difference between the Romanian productivity level and the trade weighed average of its main advanced trading partners productivity levels. Sustainable net capital flows are proxied by the net foreign direct investment to GDP ratio. The terms of trade are defined as the ratio of export unit values to import unit values as provided by Romania’s National Institute for Statistics. All variables are transformed into logarithms. Given the relatively short time period and a limited number of observations, the results of this econometric exercise should be treated cautiously.

13.Table 1 presents the unit root test results for the augmented Dickey-Fuller and Phillips-Perron tests. The null of nonstationarity in levels cannot be rejected for any of the variables at the 10 percent significance level. Although the individual series are nonstationary, a linear relationship may still exist among some of them such that the residual is stationary. These variables are then said to be cointegrated. Given the short time period, cointegration is only tested for all possible pairs of explanatory variables. Table 2 reports the results of such cointegration tests applying the Johansen procedure. The Johansen test rejects the null of no cointegration in favor of a single cointegration vector in several cases, including specifications that allow for a deterministic trend in the cointegrating equation.10 For all these cases in which the presence of a cointegrating relationship has been established, a long-run equation is estimated using Phillips and Hansen’s (1990) Fully Modified OLS estimates.11

14. For all three specifications that included the productivity differential in the cointegrating relationship, FMOLS estimation did not produce a significant parameter estimate for the productivity differential. These results indicate that the Balassa-Samuelson effect fails to explain much of the real exchange rate movements in Romania over the past decade.12 Assuming a declining positive time trend resulted in a significant estimate for relative GDP per capita. However, the parameter estimate was strongly negative and net foreign investment turned out to be insignificant in that case. Only in the case when net capital flows and the terms of trade were employed as explanatory variables and no time trend was included, the FMOLS procedure yielded significant parameter estimates for both explanatory variables. These results are reported in Table 3.13 The terms of trade exert a strong positive effect on the real exchange rate. Net capital flows also tend to push upward the real exchange rate but the quantitative effect is small.14

Note: A crucial requirement for the validity of the FMOLS estimates, namely that the terms of trade and net capital flows are not themselves cointegrated, was met. The null of no cointegration could not be rejected at the 1 percent and 5 percent significance levels.
Table 3:

Note: A crucial requirement for the validity of the FMOLS estimates, namely that the terms of trade and net capital flows are not themselves cointegrated, was met. The null of no cointegration could not be rejected at the 1 percent and 5 percent significance levels.

17. This chapter provided an assessment of the real exchange rate in Romania over the past decade. The investigation started with the assumption that real factors have been driving the sustained real appreciation over the past decade. An econometric analysis led to the conclusion that the time-varying path for the long-run real exchange rate had been mainly determined by the terms of trade and net capital flows, both pushing the long-run exchange rate path upward. The estimated long-run path indicated a significant overvaluation of the’ real exchange rate in 1998 which was reversed in 1999 and set the basis for the strong export performance in 2000 and 2001. With structural improvement in the terms of trade likely to diminish and the relatively weak impact of capital inflows, the scope for further real appreciation seems limited. However, in view of the relatively short time period on which the analysis was based on, it cannot be ruled out that other real effects such as the Balassa-Samuelson effect could assume a more important role in determining the real exchange rate in Romania and could possibly allow for further significant and sustainable real appreciation.

In the case or Romania, the degree of potential “undervaluation” of the real exchange rate is large when measured as U.S. dollar wages. Halpern and Wyplosz (1997) estimate that in 1996, Romania’s actual dollar wages were at about 25-35 percent of their equilibrium level.

See Desruelle and Zanello (1997) for a description.

Other variables include real public spending, the degree of openness and net foreign assets.

However, the accumulation of net foreign liabilities would require Romania to run a trade surplus in the future and may then require a real depreciation of the exchange rate.

As noted in Coorey, Mecagni and Offerdahl (1996), transition countries inherited a set of natural resource prices below world market prices and kept administered prices including public utility prices considerably below cost recovery levels in the beginning of the transition period. When these prices are raised toward world market prices and cost recovery levels, the measured real exchange rate appreciates. This effect can be captured by allowing for a deterministic time trend in the cointegrating equation.

If the regressors and the residuals are correlated, the t-statistics of standard OLS estimators are invalid. The Phillips-Hansen FMOLS estimation takes account of these possible correlations in a semi-parametric manner. In all cases in which the cointegrating equation includes a trend, a linear and alternatively a “root” trend has been included in the FMOLS estimation.

Standard OLS estimation led to the same results regarding the significance of the various explanatory variables.

Romania: Actual and Fitted Values for the Real Exchange Rate and Residuals, 1991-2001 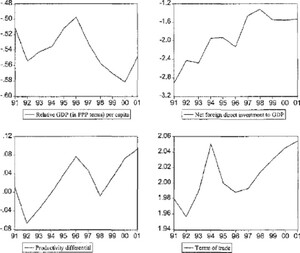 Note: A crucial requirement for the validity of the FMOLS estimates, namely that the terms of trade and net capital flows are not themselves cointegrated, was met. The null of no cointegration could not be rejected at the 1 percent and 5 percent significance levels.