This 2002 Article IV Consultation highlights that Germany’s economy is poised for a fragile recovery, after having barely grown since mid-2000. The earlier price shocks and interest rate hikes that contributed to the current slowdown have now unwound. However, sluggish global growth, stock market declines, weak credit growth, and the withdrawal implied by planned fiscal consolidation may stand in the way of a strong recovery. Real GDP growth in 2002 is estimated at about 0.5 percent, with the general government deficit set to exceed 3 percent of GDP.

This 2002 Article IV Consultation highlights that Germany’s economy is poised for a fragile recovery, after having barely grown since mid-2000. The earlier price shocks and interest rate hikes that contributed to the current slowdown have now unwound. However, sluggish global growth, stock market declines, weak credit growth, and the withdrawal implied by planned fiscal consolidation may stand in the way of a strong recovery. Real GDP growth in 2002 is estimated at about 0.5 percent, with the general government deficit set to exceed 3 percent of GDP.

1. This supplement reports on information that has become available since the issuance of the staff report (SM/02/309) and on discussions with the authorities that took place during the Annual Meetings and via videoconference on October 17, 2002.1 Annex I contains additional analysis of debt Sustainability, which confirms, as indicated in the staff report, that Germany’s fundamental fiscal challenges are of a long-term nature. The discussions with the authorities focused on the short-term economic outlook and the policy plans of the newly re-elected government. The new information reinforces the thrust of the staff appraisal.

2. Recent data suggest the economy is continuing to grow at a slow pace, but forward looking indicators imply a weaker growth outlook than in staff’s current projections. The latest hard data are consistent with staff’s estimate that the economy expanded at a weak pace—around 1 ½ percent at an annualized rate—in the third quarter. Private credit may also have turned the corner after declines in the first half of the year. However, the expectations component of the Ifo business survey and the ZEW sentiment indicator have contracted further (see Figure 1), and the survey of Consensus Forecasts for growth in 2003 has been marked down by 14 percentage point in the past month to 1.5 percent. More pessimistic expectations are consistent with the continuing volatility in financial markets and the uncertainties regarding security issues in the Middle East. On the basis of the assumptions underlying the last World Economic Outlook, staff would mark down its real GDP growth projection by about ¼ percentage point in 2003 to 1 ¾ percent. A larger downward revision would be warranted if proposed additional fiscal measures (see below) are indeed included in next year’s budget, or downward risks to the global outlook were to be reflected in projections. Growth in 2002 is expected to be only marginally lower, and still about ½ percent.

3. The authorities broadly agreed with staff’s assessment, although the official forecast will not be finalized until the end of the month. The authorities accepted that growth in 2002 and 2003 was likely to fall short of the existing official projection of about ¾ percent and 2 ½ percent for these years. They noted that prospects for exports in particular had dimmed relative to what had been expected in Spring 2002 when the official forecast was last updated.

4. Recent data have led the authorities to conclude that the general government deficit will likely exceed 3 percent of GDP this year. While full data were not available, it was clear that tax collection in September had disappointed and remained below last year’s low level. At this stage, the authorities could not say how large any overshooting of the 3 percent mark was likely to be, especially with scant information available on developments in the finances of the lower levels of government. Staff now sees the deficit in 2002 being close to 3 ½ percent of GDP rather than the 3.1 percent of GDP in the staff report. Except for some higher cyclical expenditures, most of the upward revision stems from weaker revenue. Some of the shortfall in revenues, particularly in corporate taxes, is not fully understood and does not have a straightforward cyclical interpretation.

5. The authorities are taking steps to ensure that the general government deficit falls back below 3 percent of GDP in 2003. Following discussion between the coalition partners, the authorities have agreed on a package of tax measures amounting to about Є7 billion (0.3 percent of GDP). These measures, which are in addition to the postponement of income tax cuts explained in the staff report, include revisions to VAT, corporate income and capital gains taxation, as well as reductions in tax expenditures and exemptions. Some of the tax measures could, however, encounter parliamentary opposition. In addition, expenditures (primarily on labor market programs) are to be cut relative to current policies by about Є7 billion. An official projection for the deficit in 2003 will be available in November, according to the usual budget timetable. It will be based on assumed real GDP growth of 1 ½ percent in 2003, the average growth rate in the past ten years. The authorities stressed, however, that this was merely a prudent assumption and they expected actual growth to be higher. They believed that their strong efforts to bring the deficit rapidly back under 3 percent of GDP would be favorably received by their Stability and Growth Pact (SGP) partners.

6. Looking beyond 2003, the authorities are strongly committed to reaching close to balance for the general government deficit in 2006. The authorities agreed with the majority of EU Finance Ministers that governments that had not yet achieved budget balance should aim to reduce their structural balances relative to GDP by ½ percentage point a year. But, because tax cuts had already been approved for 2004 and 2005, the German authorities would front-load their consolidation effort. Their fiscal plans would be based on conservative growth projections of 1 ½ percent in each of 2003 and 2004, and 2 percent in 2005-06.

7. Staff noted that the front-loaded adjustment would imply a large fiscal withdrawal in 2003. Even assuming announced expenditure cuts would mainly help to keep expenditures broadly on track with earlier plans, the additional tax measures would augment the already planned withdrawal of stimulus in 2003 of ¾ percentage point of GDP by about ¾ percentage point of GDP. Staff observed that a withdrawal of about 1 percentage point of GDP would be consistent with the intention to bring the general government deficit significantly below 3 percent of GDP, assuming the deficit was around 3 ½ percent of GDP in 2002.2 The authorities did not dispute the calculations, but reiterated that budget plans had yet to be finalized.

8. The authorities explained that the government firmly intended to implement all the recommendations of the recent Hartz Commission. The budgetary cost of Hartz Commission measures would be more than offset by savings in active labor market programs. Moreover, the authorities stressed that labor market reform had been placed at center stage of the government’s policy program and a merger of the Ministries of Economy and Labor would provide the bureaucratic infrastructure to implement the measures. Staff pointed out that the Hartz Commission proposals did not address incentives to work or problems with the flexibility of hiring and firing regulations. The authorities agreed that additional reforms might be needed, but stressed that the importance of the Hartz Commission measures should not be understated. Not only did they make an important contribution to job matching efforts, but, above all, they represented a major break in the labor market reform stalemate.

9. The confluence of structural and cyclical strains in the banking and insurance sectors continues to merit supervisors’ close attention. Reflecting market anxieties, bank stock prices have been unusually volatile in these past few weeks, falling sharply before staging a strong rebound. Since the beginning of the year, commercial bank stock prices have fallen on average by nearly 50 percent in Germany. The authorities explained that they were continuing to monitor the situation in the financial sector carefully. Their views had not changed since the time of the mission—i.e., they did not see the current difficulties in the financial system as posing systemic risks.

10. In staff’s view, the implied fiscal withdrawal next year will place a significant burden on the economy at a time of cyclical weakness and uncertainty. It is commendable that Germany does not want to undermine the SGP, but the timing of a strongly front-loaded adjustment is questionable. Moreover, the implied withdrawal goes well beyond the benchmark structural consolidation rate of ½ percentage point of GDP a year that staff continues to view as appropriate. In this context, the postponement until 2004 of tax cuts (amounting to 0.3 percent of GDP) originally planned for 2003 is adding to front-loading strains as well as detracting from pre-announced medium-term tax reform plans.

11. The quality of planned fiscal adjustment could also be improved. As the actual formulation of the budget proceeds in the next month, the authorities should focus on putting durable and well-targeted expenditure restraint at the center of fiscal consolidation. Some of the tax measures proposed will reduce distortionary exemptions in VAT and income taxes. But, so far, the government has not indicated any intention to undertake much needed cuts in subsidies and entitlements. These will be essential for a credible fiscal consolidation with the most beneficial effects on long-term growth. Moreover, leaving fiscal consolidation to rely on continued public sector pay compression could be challenged even in the current public sector pay round where unions have put in for increases of around 4 percent.

12. The authorities intention to move ahead quickly with Hartz Commission measures is a welcome signal of a willingness to reform labor markets. Ultimately, however, more is needed. In particular, measures that more clearly increase incentives to work and reduce barriers to employment decisions are essential to raise the efficiency of the labor market.

On both occasions, the principal representative for the authorities was Ministry of Finance State Secretary Koch-Weser. 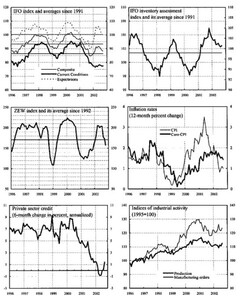