This paper examines the monetary and exchange rate policies of the euro area and the trade policies of the European Union. The paper highlights that the overall economic performance of the euro area has been disappointing: growth has been weaker and inflation higher than generally expected. To a large extent, this is the result of a series of unanticipated shocks—oil prices and animal diseases earlier, and the global slowdown and the associated financial market turmoil more recently. However, the performance also appears to reflect a greater-than-anticipated vulnerability to shocks.

This paper examines the monetary and exchange rate policies of the euro area and the trade policies of the European Union. The paper highlights that the overall economic performance of the euro area has been disappointing: growth has been weaker and inflation higher than generally expected. To a large extent, this is the result of a series of unanticipated shocks—oil prices and animal diseases earlier, and the global slowdown and the associated financial market turmoil more recently. However, the performance also appears to reflect a greater-than-anticipated vulnerability to shocks.

1. This supplement reports on economic and financial developments in the euro area since the issuance of the staff report (SM/02/303). The new information does not alter the thrust of the staff appraisal.

2. Recent data on the pace of the area’s real economic activity point to a continued tepid recovery during the second half of the year, particularly in the case of Germany. Readings of business and consumer confidence during August-September changed little, but the Reuters’ Purchasing Managers Indices (PMIs) for September fell back below the 50 points threshold, conventionally viewed as signaling a preponderance of contractionary forces. At the same time, new releases of industrial production and retail sales data were consistent with real GDP growth at about the same pace as in the first half of the year. Finally, reflecting the continued resilience of the area’s job market, the unemployment rate in August was unchanged at 8.3 percent, close to its trough in 2001 (8.0 percent). Overall, area GDP growth during the second half of this year is likely to fall somewhat short of the issued report’s baseline projection, with average annual growth now gauged at ¾ percent (compared with 0.9 percent in the staff report). Activity during next year is still expected to expand at a quarterly pace close to potential, yielding annual growth of about 2 percent in 2003, somewhat lower than the 2¼ percent in the issued report owing to carryover effects.1 Recent financial market turbulence (see below) has, however, added to the already considerable downside risks surrounding prospects for the recovery in 2003.

3. In line with staff’s projections, the headline HICP inflation rate has hovered around 2 percent, with inflation rates rising slightly in August and September (2.1 percent), reflecting recent increases in energy prices. Core inflation (headline rate excluding energy and unprocessed food) in August and September was unchanged at 2.5 percent. At the same time, households’ perceptions of consumer price trends over the last 12 months in September remained stuck at an unusually elevated level, markedly out of line with actual inflation trends. Nominal hourly labor costs increases eased—albeit to a still high—3 ¾ percent (y-o-y) in the second quarter (after 4 percent in the first quarter); a new indicator of negotiated wage increases constructed by the ECB also suggested that nominal wage increases have eased slightly.

4. In financial markets, in line with global trends, euro-area equities tumbled during the last few weeks before reversing part of the steep losses more recently (Figure 1). Declines were particularly hefty in Germany, where since the beginning of the year Frankfurt’s DAX index has lost more than 40 percent of its value. Recent declines in shares have been especially pronounced in the financial sector, in part reflecting investor concerns about the financial situation of some banks. These developments require heightened vigilance by supervisory authorities, especially if downside risks to the recovery materialize.(2) In the bond markets, the area’s long-term government yields continued to ease in recent weeks but at a markedly slower pace than in the United States. As another reflection of investor re-pricing of risk, spreads of euro-area corporate bonds over government bond yields have widened markedly, particularly for “new economy” companies. In foreign exchange markets, the U.S. dollar/euro exchange rate has remained stable and close to 0.98.

5. At its latest meeting on October 10, the ECB’s Governing Council left policy interest rates unchanged, with the main refinancing rate now left at 3¼ percent since November 2001. The Governing Council noted that the strength of the expected recovery has become subject to increased uncertainty, not least in view of the sharp declines in equity markets and uncertainties about oil prices related to the volatile situation in the Middle East. Against this background, the Council saw the risks to price stability over the medium term as balanced and kept policy rates unchanged.3 Forward markets are pricing in an easing in policy rates equivalent to some 25 basis points by the end of the year (Figure 1)

6. On fiscal policy, most member countries are in the process of finalizing their budgets for 2003 and preparing updates of their Stability Programs.4 The Commission recently (September 24, 2002) elaborated on its position regarding the definition and monitoring of countries’ obligations to reach underlying fiscal positions close-to-balance or in surplus under the Stability and Growth Pact (SGP). The Commission proposed:

7. The Commission’s proposals met with diverse reactions among the authorities, reflecting member countries’ past fiscal adjustment efforts (see Figure 2) and already announced budget plans for 2003. The authorities of some of those countries that have already fulfilled their fiscal adjustment obligations expressed concern about the proposals’ impact on the longer-run credibility of the SGP. In the Eurogroup’s official response to the proposals, all member countries’ re-affirmed their commitment to avoid excessive deficits and “to achieve and maintain budgetary positions close to balance or in surplus over the cycle.” It was also agreed that members that had not achieved that objective should “pursue continuous adjustment of the underlying balance by at least 0.5 percent of GDP per year,” with “all Ministers but one accepting this to start no later than in next year’s budget.” In contrast with the Commission’s proposals, the Eurogroup’s statement set no explicit deadline for reaching budget balance (either in actual or structural terms).

8. Looking ahead, there are now indications that fiscal adjustment efforts in the three largest countries will fall short of a coordinated consolidation approach, implying diverging underlying fiscal positions among these countries that could further strain the SGP’s credibility. In particular, while the area’s overall structural balance in 2003 could still improve by some Vi percent of GDP, as projected in the staff report, the bulk of this adjustment among the three largest countries will be owing to Germany and to a lesser extent to Italy, although in the latter case adjustment largely reflects the authorities’ announced intention to change the accounting treatment of some spending items and to cut transfers to railways and postal services. France is budgeting a basically unchanged fiscal stance for 2003. More detailed updates on recent fiscal developments and assessments of the pace and quality of fiscal adjustment in the three largest countries will be issued in the separate supplements to the respective Article IV papers.

9. At their latest ECOFIN Council meeting on October 8, EU ministers of finance agreed to a plan that would extend the Lamfalussy process for securities market integration to also fast-track the pace of banking and insurance legislation.

10. In the staff’s view, the still sluggish signals emanating from the cyclical indicators, the recent declines in equity markets and the associated tensions in the financial system portend somewhat slower growth during the second half of the year than projected in the staff report and have added to the downside risks for the area’s growth prospects next year. Nevertheless, the basic thrust of the staff’s appraisal in the issued report with regard to monetary and fiscal policies remains unchanged.

The Consensus forecasts for area-wide real GDP growth stand presently at 0.8 percent (2002) and 1.9 percent (2003), and have been revised downward significantly in recent months (the Consensus is mostly based on forecasts by financial institutions)

At the ECB’s press conference on October 10, President Duisenberg characterized the capital positions of financial institutions as generally robust and also noted that there appear to be no signs of a credit crunch (at least for the area as a whole) as private loans have continued to expand at a rate of above 5 percent, in line with the area’s longer-term averages.

At the meeting on September 12, the Governing Council had viewed risks to price stability as “rather balanced” (instead of “balanced”) and had explicitly noted that the level of policy rates was “appropriate,” some ECB observers have interpreted the more recent language adjustments as signaling a slight easing bias. 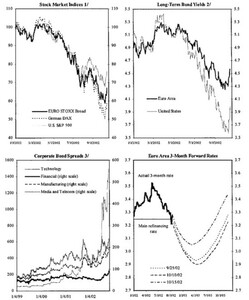 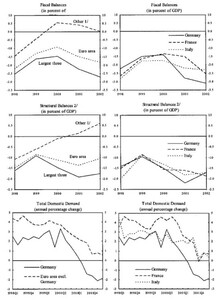