This chapter assesses various indicators of competitiveness of the non-oil tradable sector in Iran and examines some of its determinants, including the real exchange rate and structural factors. The note is organized as follows. Section A assesses the recent performance of the tradable non-oil sector. Section B reviews developments in the real exchange rate using various measures and examines their relation to competitiveness. Section C discusses the structural factors affecting competitiveness.

This chapter assesses various indicators of competitiveness of the non-oil tradable sector in Iran and examines some of its determinants, including the real exchange rate and structural factors. The note is organized as follows. Section A assesses the recent performance of the tradable non-oil sector. Section B reviews developments in the real exchange rate using various measures and examines their relation to competitiveness. Section C discusses the structural factors affecting competitiveness.

III. Competitiveness of the Non-oil Economy in Iran12

A. The Recent Performance of the Non-oil Tradable Sector

38. After the difficult years of 1995–97, non-oil exports have been growing since 1998 at an average annual rate of 10 percent in dollar terms (Box III-1). This performance was comparable to those of other countries in the region and countries with similar per capita incomes (Figures III-1). As a result, Iran managed to preserve its world-wide market share during 1996-2001, with a loss of positions on the European markets being offset by increased penetration in Asia and the Gulf countries (Figure III-2). However, the growth in non-oil exports somewhat decelerated over the last two years, resulting in a decline in the worldwide market share.

39. The petrochemicals sector was the main source of non-oil growth over the last few years. Having remained marginal until 1999, exports of petrochemicals took off as a result of recent joint ventures with foreign investors, and today account for more than 10 percent of total non-oil exports. Excluding petrochemicals, growth of other non-oil exports from 1999 to 2002 was only 2 percent per year on average (Figure III-1).

40. Import-substituting activities have performed strongly over the last several years. Indeed, manufacturing output, largely representing import substitution, has been increasing by about 9 percent annually over the last three years. However, while car manufacturing, metal industries, and chemicals have enjoyed rapid growth, the output of other industries such as textiles, food and paper manufacturing has been on a declining trend in recent years (Figure III-2).

Factors Affecting Non-oil Exports in Iran in the 1990s

The export performance of the non-oil tradable sector in the 1990s largely reflected the structural and macroeconomic policies of Iran. During the early part of the decade, the government pursued expansionary fiscal policy in support of a large infrastructure reconstruction program and an ambitious social agenda. At the same time, the government initiated a program of economic policy reform, decontrolling domestic prices, removing many trade restrictions, liberalizing the exchange system, and encouraging private sector activity. As a result, GDP growth accelerated and macroeconomic indicators improved. Benefiting from the opening-up of the economy, non-oil exports surged, placing Iran in the ranks of the best performers in its income category and in the region. However, the government’s expansionary policies resulted in large macroeconomic imbalances.

The years from 1995 to 1997 were characterized by a series of policy reversals and a sharp deterioration of economic performance. Under the pressures of a fall in oil prices, the U.S. embargo on trade and investment, and a tight debt repayment schedule, the expansionary government policies became unsustainable, which together with the impact of adverse external factors resulted in stagnation and inflation, and culminated in a debt crisis. In this context, the non-oil export sector was particularly constrained by (a) the excessive compression of imports (reaching up to 50 percent reduction in some years) needed to make room for external debt repayments as Iran’s access to external financing was severely limited, (b) the extension of U.S. financial and economic sanctions that restricted market access to Iranian exports, and (c) the tightening of exchange controls, including the reinstitution of multiple exchange rates and the imposition of export repatriation and surrender requirements in an attempt to contain the unfolding foreign exchange crisis. As a result, non-oil exports fell to their level of the early 1990s.

Since 1997-98, Iran has initiated a series of reforms, with the recovery of oil prices since 2000 helping in stabilizing the economy and significantly easing the debt problem. Some progress has been achieved in reforming the areas relevant to the export sector: the various exchange rates have been progressively unified, exporters have been granted easier access to inputs at world prices, most export barriers have been removed, and a large number of nontariff barriers have been replaced by tariffs. As a result, non-oil exports recovered.

B. Movements in the Real Exchange Rate

41. The CPI-based real effective exchange rate (REER)13 has been volatile over the last five years, with an appreciating trend emerging since end-1999. After appreciating through early-1998, the CPI-based REER, using the weighted average of nominal exchange rates,14 depreciated during the period 1998-99, reflecting the variations in international oil prices, the inflation differential with Iran’s trading partners, and the gradual devaluation of several official rates since 1998.15 Since end-1999, the REER has appreciated by about 40 percent to about 20 percent above its average level of the last five years.16 The most recent appreciation reflects a strengthening of the nominal effective exchange rate, as well as higher inflation differential with Iran’s major trading partners. The real exchange rate now exceeds the previous peak level reached at end-1998 (Figures III-3).

43. The recent evolution of the REER in Iran contrasts with developments in comparable countries, where the real exchange rate has remained broadly stable (Figure III-3). The differences in trends appear to have been substantial and emerged over a relatively short period of time, indicating that the competitive position of the Iranian tradable sector might have deteriorated over the last few years only.

44. The appreciation of the REER is unlikely to have been fully justified by productivity gains. Recent studies have found that despite strong advances in education, the gains in overall productivity in Iran, as measured by the growth in total factor productivity (TFP), were very low throughout the 1990s and even negative during some years (Table III-1).

Management and Planning Organization of Iran.

Management and Planning Organization of Iran.

Notwithstanding the likely impact of the recent trade liberalization and other reforms, there is as yet no conclusive evidence that this trend has changed over the recent past. Accordingly, it is unlikely that the equilibrium real exchange rate in Iran has appreciated because of higher growth in productivity relative to trading partners.17

45. Also, the relative evolution of unit labor costs (ULC) has not offset the real appreciation of the exchange rate. In fact, wages in both the private and the public sectors have been increasing rapidly and, as a result, the ULC-based REER has appreciated by 45 percent since end-1999 (Figure III-3).18

46. Pro-cyclical fiscal policies in periods of high international oil prices have contributed to the appreciation of the real exchange rate. Until recently, fiscal policy had not smoothed out expenditure in the face of sharp increases in oil prices, thereby transmitting the terms-of-trade shocks to domestic demand. While excess demand in traded goods caused the decline of the non-oil external balance, excess demand for non-traded goods resulted in increases in their price to preserve home-market equilibrium. In addition, the concomitant boom in construction since 1999 might have further exacerbated what could be seen as an episode of “Dutch Disease” (Table III-2).

47. A number of offsetting factors have contributed to preserve the profitability and external competitiveness of the non-oil tradable sector and could explain why non-oil exports and import-competing industries have continued to grow under the combination of an appreciating REER and slow productivity growth. These factors include:

48. The impact of the above offsetting cost reductions may be diminishing, however, as trade liberalization proceeds, energy prices are raised, and excess capacity is utilized. Under these conditions, a further real appreciation might exacerbate the difficulties of the non-oil tradable sector through further deterioration of profitability, which, if sustained, could undermine the development of the non-oil tradable sector.

C. The Structural Impediments to Competitiveness

49. Iran’s problems of competitiveness have been, and still remain to an important extent, of a structural nature.19 Disentangling the various structural factors that hinder competitiveness in Iran may be difficult, but a number of factors are at the core of the problem, including public sector dominance of the economy, restrictive trade policies, and the lack of a competitive business environment.

50. An acceleration of structural reforms over the medium-term would enhance competitiveness. In particular, further efforts to open up the economy, enhance domestic competition and increase the flexibility of the labor market could help the tradable sector adjust to the real exchange rate appreciation. On the other hand, in the absence of reforms that would eliminate the structural impediments to competitiveness, an active exchange rate policy leading to a significant depreciation of the exchange rate might not be sufficient to bring about a lasting improvement in the competitiveness of the non-oil sector.

The caveat regarding the use of CPI -based REER in assessing competitiveness is the existence of distortions from price controls and the fact that non-traded goods are included in the CPI basket while intermediate goods are not.

The weights assigned to the Tehran Stock Exchange (TSE) and official exchange rates varied depending on the composition of transactions.

More specifically, the real appreciation amounted to 44 percent between Dec. 1999 and Dec. 2001 when using the TSE rate and to 35 percent when using the weighted average rate (Figure III-l).

Similarly, the relative non-oil terms of trade have remained stable over the last couple of years and thus are unlikely to have caused an appreciation of the equilibrium real exchange rate.

This measure may be the most appropriate as a competitiveness indicator since it proxies production costs when combined with productivity and is an important factor in determining profitability. However, the measure misses some components of actual costs, such as capital and energy. The measurement of productivity, which underlies the ULC-based measure is difficult to assess in practice. As a proxy for productivity growth in manufacturing, we used the growth in the value-added per employee in the industrial sector. Two available series for wages were used: wages in the construction sector and wages in large manufacturing companies.

Competitiveness is determined by structural factors that extend far beyond the level of the real exchange rate. In particular, factors such as good governance, openness, adequate infrastructure, sound financial sector, flexible labor markets, and developed market institutions, in addition to technology, are important determinants of competitiveness (see Zinnes, 2001). 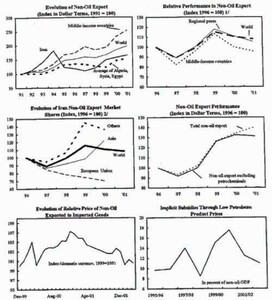 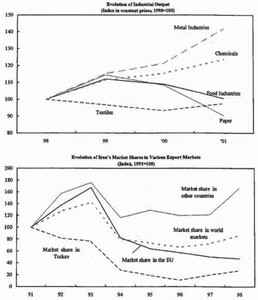 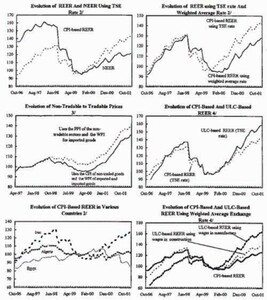