VIII. The Effectiveness of the Fiscal Rules Under the Budget Enforcement Act and Options for Reform1

1. Eliminating the U.S. federal budget deficit during the 1990s marked a significant fiscal milestone. The unified budget surplus in FY 1998 was the first in nearly 30 years, and the surplus in the following year was the largest relative to GDP since 1951 (Figure 1). Although the prolonged period of economic growth and legislative initiatives during the 1990s undoubtedly played important roles in achieving this fiscal turn around, a key factor was also the Budget Enforcement Act of 1990 (BEA) which introduced caps on discretionary spending and a “pay-as-you-go” (PAYGO) requirement for new legislation affecting mandatory spending and tax receipts.

2. More recently, however, there has been a deterioration in the fiscal position, which appears to have partly reflected an erosion in the effectiveness of the BEA mechanisms. The apparent weakening of budget discipline and the expiration of the BEA rules at the end of FY 2002 raises the issue of how, or whether, to reform its enforcement procedures. This chapter reviews evidence on the effectiveness of the BEA mechanisms, and briefly discusses some of the principal options.

3. Rising deficits during the 1980s prompted a series of reforms to budgetary legislation and procedures. Of these, the most significant were:

The Main Provisions of the BEA

The BEA has three main features:

Sequestration: Sequestration procedures are used to enforce the BEA. For discretionary spending, if the amount of budget authority specified in an appropriation act, or the outlays in a particular year, exceed the corresponding caps, the BEA requires a reduction in spending in the relevant category by a uniform percentage. Special rules are specified for reducing some programs, and others are exempt from sequestration entirely. For mandatory spending and revenues, the Office of Management and Budget is required to estimate whether the new laws enacted meet the PAYGO requirements. If they do not, a uniform reduction is required across all mandatory spending programs that are not exempt or subject to special rules. These latter categories cover Social Security, interest on public debt, Medicaid, and Medicare, leaving only 3 percent of mandatory spending subject to sequestration. Sequestration procedures have been enacted only once, in 1991.

4. Deficit reduction during the 1990s was the result of both rising tax revenues and falling expenditures (Figure 2). It is impossible to say with certainty how much the BEA rules contributed to this fiscal consolidation, not least because the counterfactual—that is, what the deficit would have been in the absence of these rules—is not known. Nonetheless, this section reviews the effectiveness of the BEA rules from a variety of different perspectives: the design of the BEA’s rules compared to those of the GRH; trends in spending; accounting for the role of economic growth in reducing the deficit; and enforcement and budget transparency issues.

5. The design of the BEA enforcement mechanisms are widely viewed as a significant improvement over the GRH procedures, in at least three respects.3 First, the BEA rules apply to outturns, while the GRH provisions applied only to deficit targets and thereby encouraged budgets to be based on overly optimistic macroeconomic assumptions. Second, the BEA applies to spending and tax laws, over which the government has direct control, and thus it has held lawmakers accountable for the costs of the laws they enact. In contrast, the deficit targets under GRH were subject to many factors beyond government control. Third, the combination of overoptimistic assumptions and a focus on the deficit made the amounts subject to sequestration under GRH so large as to lose credibility. Sequestration under the BEA, although only applied once in 1991, has been a more credible deterrent—at least until the late 1990s when it was circumvented by large emergency appropriations and adjustments to the caps, as discussed below.

Trends in discretionary and mandatory spending

(In billions of dollars)

Source: Office of Management and Budgeting.

(In billions of dollars)

Source: Office of Management and Budgeting.

7. Mandatory spending has fallen slightly as a share of GDP since 1991 (Figure 4). Although PAYGO did not completely halt the enactment of new spending initiatives—e.g., the children’s health insurance program enacted in the late 1990s—several studies have argued that the PAYGO requirement was effective in discouraging new mandatory spending initiatives and tax cuts. Elmendorf, Liebman, and Wilcox (2001), for example, emphasize the relative lack of tax cuts and spending increases in the face of large surpluses at the end of the 1990s.4 In addition, Schick (2000) argues that the PAYGO rules may have encouraged some reforms of the welfare system, such as converting Aid to Families with Dependent Children from an open-ended entitlement to a fixed block grant.

The role of economic growth

8. In achieving fiscal consolidation, the importance of the BEA relative to strong economic growth during the 1990s remains an open question. Anderson (1999) notes that while discretionary spending outturns were close to the BEA limits between FY 1993 and FY 1998, outturns for mandatory spending and revenues were very different from the projections made in January 1993. He argues, therefore, that the effects of unexpectedly strong growth on revenues and mandatory spending were more important than the limits on discretionary spending in achieving deficit reduction. This is illustrated in Figure 5, which shows the CBO’s one-year-ahead forecast errors for revenues and expenditure that can be ascribed to economic factors. Significant and prolonged underprediction of the effect of economic growth on revenues and on some mandatory spending programs apparently played an important role in assisting deficit reduction.

9. In contrast, comparisons of structural and actual budget balances suggest that economic growth played a more limited role in fiscal consolidation. Removing the impact of cyclical factors from changes in the budget balance indicates the extent to which structural factors—including the budget rules—contributed to consolidation. Table 2 shows three different estimates of the contribution of cyclical factors to fiscal consolidation between FY 1992 and FY 2000. These estimates suggest that structural factors played a more important role in the overall improvement in the budget balance.5 By implication, the BEA enforcement mechanisms, as well as other structural factors, including the tax increases of 1990 and 1993 and lower defense expenditures following the end of the Cold War, contributed to the improvement in the fiscal position.

10. With the emergence of fiscal surpluses beginning in FY 1998, the spending caps and PAYGO were routinely circumvented using a range of devices.6

11. More generally, the BEA enforcement mechanisms, and the subsequent devices used to circumvent them, have added complexity to the federal budget process. It has also been suggested that the BEA rules have encouraged increased recourse to extra-budgetary devices including regulatory instruments and unfunded mandates. Nonetheless, the BEA has improved fiscal transparency in many respects, including by requiring full listings, cost estimates, and intensified scrutiny of all tax expenditures. In addition, the scorekeeping guidelines were codified and published in the 1997 Balanced Budget Act, and the scorekeeping period was extended from five to ten years, in an attempt to reduce the scope for timing shifts. Finally, where all budget rules and processes are subject to abuse, several studies have concluded that the BEA has resulted in less gimmickry than occurred under GRH.7

12. Given the recent erosion of the U.S. fiscal position and the longer-term fiscal pressures that demographic trends are likely to imply, there is an evident need for strengthened budget discipline. International experience clearly suggests that fiscal rules cannot substitute for an underlying political commitment to fiscal discipline and longer-term fiscal sustainability, and the revenue and expenditure policies that would be required.8 If the political commitment is present, the U.S. experience between 1990 and 1998 suggests that BEA-type rules can play a useful role in bolstering budget discipline.

13. At the same time, however, the erosion of the effectiveness of the BEA’s rules during the more recent period indicates the need for reform. Some of the specific options under discussion include the following:9

The fiscal year runs from October 1 to September 30.

See GAO (2002) and other recent submissions to the House Committee on the Budget. Note, however, that the Administration’s FY 2003 Budget includes some proposals besides refining the caps and PAYGO provisions, such as replacing the Congress’s Concurrent Resolution with a Joint Budget Resolution, approved by the Congress and signed by the President that would have the force of law; correcting the constitutional flaw in the Line Item Veto Act, and linking the caps to debt reduction; and introducing biennial budgeting. 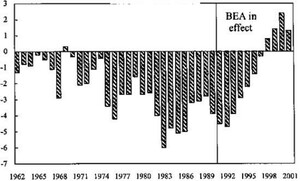