1. The Federal Reserve cut interest rates 11 times over the course of 2001, lowering the federal funds rate target from 6½ percent at the end of 2000 to 1¾ percent on December 7, 2001. Despite this aggressive easing, continued weak activity gave rise to growing questions about whether interest rate cuts were less effective than in the past at countering recessionary forces. This concern was exacerbated by the contraction of output in the third quarter of 2001—six months after the Federal Reserve had begun to ease and within a period in which monetary stimulus would have been expected to have had an effect.

2. There remains considerable uncertainty among academic and other researchers regarding these questions. This chapter briefly reviews a number of the explanations that have been put forward to explain the apparent weak response of the economy to the interest rate cuts of 2001, including: the usual transmission lags for monetary policy and the effects of the earlier monetary tightening in 1999–2000; structural changes in the response of the economy to interest rates; and the possible offsetting effects on financial conditions of lower stock prices, the strong dollar, and tighter credit conditions.

3. Recent empirical work by Bernanke and Mihov (1998) illustrates that there is a considerable transmission lag between the time that a change in monetary policy occurs and its subsequent effect on the economy. As shown in Figure 1, their analysis suggests that there is a two-quarter lag before monetary policy begins to affect output—the impact on GDP of a 1 percentage point cut in the federal funds rates would peak at 0.2 percentage point four to six quarters after the interest rate change and then decline thereafter.2

5. In the first case, the transmission lags mean that the 2001 policy actions would not have their full effect until around the middle of 2002 (middle panel of Figure 2). By mid-2002, the policy easing of 2001 would be expected to raise the level of (quarterly) GDP by 3½ percent over the baseline, while GDP growth would be nearly 3½ percentage points higher at an annual rate. These results suggest that even the quite aggressive monetary easing that occurred in 2001 would not be expected to have full impact until the middle of 2002.

B. Structural Changes in the Response of GDP and its Components to Interest Rates

7. Some analysts have suggested that the apparent unresponsiveness of activity to the 2001 monetary stimulus has reflected a diminution of the response of activity to interest rates. Using the framework suggested by Kuttner and Moser (2002), this section considers this possibility by examining correlation between changes in the nominal federal funds rate and the growth rates of GDP and its components over two time periods, 1970-2001 and 1984-2001. The latter period is chosen to correspond with the shift by the Federal Reserve away from monetary targets. (Figure 3) shows the correlation between real GDP growth and its components with changes in the federal funds rate from 8 quarters before an interest rate change to 12 quarters after.5

8. For overall GDP growth, the correlations for the full sample suggest that there is a two-quarter lag before the impact of interest rates is felt, with the effect on activity evident for some 10 to 12 quarters. In the period since 1984, the negative correlation between interest rate movements and the subsequent change in activity is smaller, but the positive relationship between GDP growth and future interest rate hikes is stronger, possibly reflecting a change in the intensity of the counter cyclical action by policymakers.

9. The relationship between monetary policy and activity differs substantially across the components of demand, with durables consumption and residential investment exhibiting a relatively significant response to interest rate changes.

10. The apparent decline in the correlation between GDP growth (and its components) and interest rate changes since 1983 has been ascribed to several structural factors. For example, the wider holding of nonresidential financial assets by households may have increased the importance of changes in equity wealth rather than interest rates for determining consumption. The potency of interest rates may also have been affected by financial sector developments, including the deregulation of bank interest rates in the 1980s, the increased access of firms to capital markets, including though securitization, which may have reduced the importance of banks in providing credit. Similarly, new sources of mortgage finance for residential housing could also have lessened the effect of changes in interest rates on housing.7

11. Several authors have also suggested that changes in the behavior of the Federal Reserve could also have affected how monetary policy has worked. For example, Gali, López-Salido, and Vallés (2002) and Ball and Tchaidze (2002) have shown that the Federal Reserve has reacted less aggressively to changes in output growth and unemployment since the mid-1980s. This meant an increased willingness to accommodate positive supply shocks, including a decline of the U.S. unemployment rate to under 4 percent—well below most estimates of the non-accelerating inflation rate of unemployment (NAIRU)—in the latter half of the 1990s.

12. Boivin and Giannoni (2002) offer similar conclusions. They show that the monetary transmission mechanism has been relatively stable over time, but that the Federal Reserve has become more effective in countering the impact of shocks on the real economy. Thus, while monetary policy remained potent, the need for unexpected interest rate movements has declined over time because of an improvement in the systematic response of the Fed to economic developments. Kuttner and Moser (2002) conclude that this is consistent with the observation of a smaller correlation between interest rate changes and output growth in recent years, since there would be zero correlation between interest rate changes and growth were monetary policy to become fully effective at stabilizing output.

13. By conventional standards, policy interest rates were set at highly accommodative levels during this period. For example, the federal funds rate target of 1¾ percent at end-2001 was more than 2 percentage points below the rate indicated by a Taylor rule (Figure 4).8 This suggests that the Federal Reserve had set short-term interest rates well below the levels that would normally have been suggested by prevailing levels of inflation and the output gap. Moreover, the rapid growth of the monetary aggregates also suggested a highly accommodative policy stance.

14. At the same time, however, other financial variables—such as longer-term bond yields, stock market valuations, and the exchange rate—appeared less stimulative and may have worked to offset the stimulus provided by short-term interest rates. Indeed, an index along the lines of the Goldman Sachs Financial Conditions Index (FCI), which takes these factors into account, suggested overall financial market conditions tightened in 2001 despite the policy easing (Figure 5). The FCI is a weighted average of real three-month interest rates, real interest rates on corporate bonds, real effective exchange rates, and stock market valuation (with a minus sign so that lower equities prices correspond to tighter conditions). An increase in the index corresponds to tighter (less stimulative) financial market conditions.9

15. The FCI index illustrates that the effect on demand of the decline in interest rates may have been offset by a strengthening of the dollar, equity price declines, and higher interest rates on corporate bonds even while short-term interest rates fell. However, care is needed in drawing too strong a conclusion from these types of summary indicators, as it is unclear whether these have significant predictive power for GDP growth.10

This is based on the results of the “just-identified” model displayed in Bernanke and Mihov (1998, p. 893). In this framework, the growth rate returns to the baseline while the level of GDP is permanently changed, since the identification scheme does not impose long-run restrictions such as super-neutrality of money. The April 2002 World Economic Outlook contains an analysis of the effects of monetary policy using a related framework.

The results are obtained by applying the level effects to the sequence of interest rate cuts, with the impact on output equal to the cumulative effect of past interest rate changes. For the purpose of this exercise, the federal funds rate is assumed to rise gradually starting in the third quarter of 2002 to 5½ percent by the end of 2003.

These results must be interpreted with caution, as the simulations are based on the impulse-response function estimated by Bernanke and Mihov, and do not take into account the endogenous response of interest rates to output related to the policy-response function assumed in their estimation framework.

Note that unlike impulse responses described above, the correlations do not imply causality or the magnitude of the relationship between interest rates and output. Kumar and Sgherri (2002) offer estimates of these latter effects for the United States and other G-7 countries.

In results not shown, essentially no pattern is found in the correlations between interest rates and leads and lags of changes in business inventories.

See Sellon (2002) for a discussion of implications of changes in the U.S. financial system.

A Taylor rule indicates the appropriate level of the federal funds rate for a combination of GDP growth, potential GDP growth, and inflation. The rule used here is: This is based on Taylor (1993), modified as discussed in Taylor (2000), in which coefficients for the response to the output of between 0.5 and 1.0 are seen as equally reasonable. Potential GDP is derived by applying a Hodrick-Prescott filter to the log of real GDP.

For example, neither the residuals from the Taylor equation nor the level of the FCI were significantly correlated with GDP growth, especially during the 1984-2001 period. Simple vector auto regressions also did not demonstrate a significant relationship between the FCI and GDP growth.

United States: Alternative Indicators of the Stance of Monetary Policy 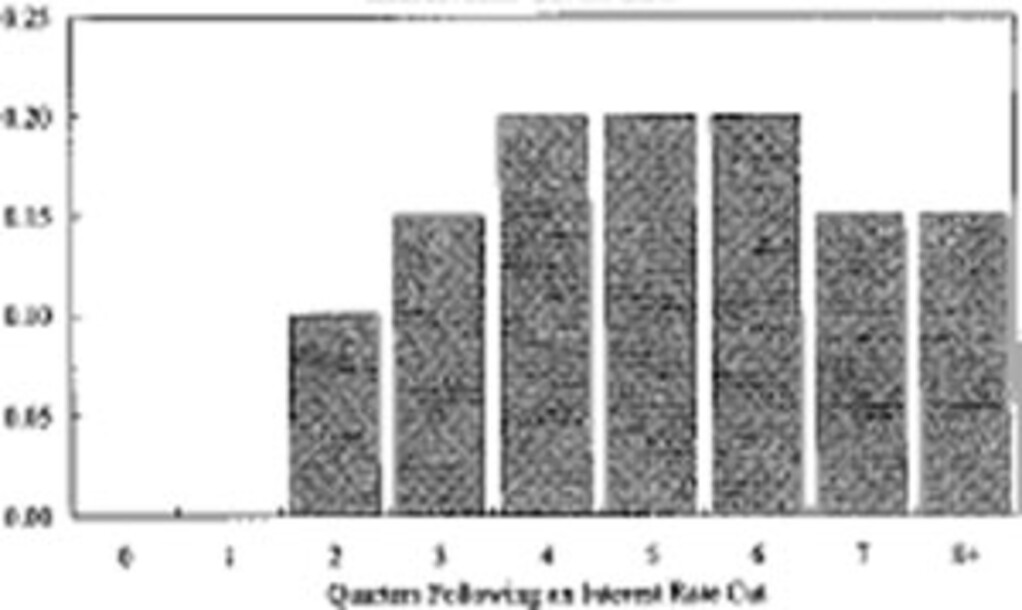 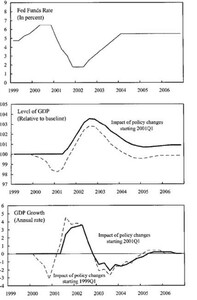 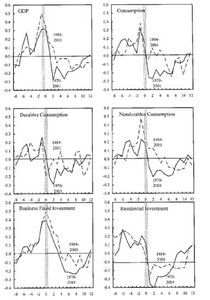 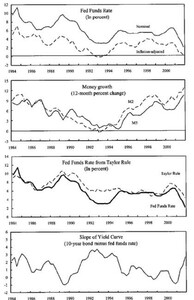 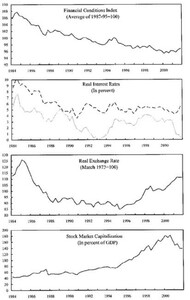