2. This chapter uses the Fund’s multi-country simulation model (MULTIMOD) to analyze the recent widening of the current account deficit and possible adjustment scenarios.3 A base-case simulation illustrates that the strength of the U.S. dollar in recent years, the widening current account deficit, and robust GDP growth can be explained by an increase in total factor productivity growth in the United States, coupled with a similarly temporary, but persistent, reduction of the risk premium demanded on U.S. assets.4 Alternative scenarios that illustrate how current account adjustment may take place are then explored: a pickup in productivity growth in other industrial countries; a realization that expectations of future U.S. productivity growth were overly optimistic; and an increase in household savings induced by a realization of the looming liabilities associated with the Social Security and Medicare systems.5

A. The Base Case

4. Key macroeconomic variables generated from this simulation mimic many of the economic developments recently observed in the United States (Figure 1). Real GD growth accelerates—even faster than the underlying growth in productivity—as households boost consumption to smooth their lifetime consumption paths and firms accumulate capital to maximize returns arising from improved productivity growth. The share of consumption in GDP increases by roughly 3 percentage points, and the share of investment in GDP increases by 1 percentage point. However, the external position worsens, with the current account deficit deteriorating by almost 2 percentage points of GDP, as imports rise owing to strong domestic demand, and exports fall owing to the effects of a 17 percent appreciation in the real effective exchange rate. The appreciation of the U.S. dollar is accompanied by increased capital inflows, which respond to higher productivity growth and higher U.S. interest rates. The dollar’s strength helps reduce import prices in dollar terms, which partially offsets demand pressures and keeps core inflation subdued.

5. This simulation illustrates that the unwinding of the substantial current account deficit that arises from a temporary, but persistent, improvement in productivity growth and a shift in investor sentiment could be quite smooth and gradual. The real effective exchange rate begins to depreciate after the completion of the upward adjustment to productivity growth, and gradually falls over the subsequent ten years. This depreciation leads to increases in the prices of investment and consumption goods, which in turn eases domestic demand pressures and slows import demand. The depreciation also stimulates export demand, generating a turnaround in net exports’ share of GDP, which after the eighth year allows the current account deficit to gradually improve and eventually move back close to its baseline long-run position.

7. In this scenario, the technological innovation underlying the improved productivity growth in the United States is assumed to be diffused across all industrial countries starting in the sixth year of the simulation. As a result, the reduction in the risk premium on U.S. assets is assumed to gradually dissipate as productivity growth accelerates in other industrial countries.6 In this case the U.S. currency depreciates more rapidly than in the base case, reflecting the shift in investor sentiment and the relative increase in real returns in other industrial countries (Figure 2).

8. Output growth in the United States initially falls below the base-case rate as domestic demand softens—this reflects a tightening of monetary policy, which responds to the impact of the depreciation on domestic price inflation, the effect of higher consumption prices on household wealth, and the effect of higher investment prices on the cost of capital. Softer U.S. domestic demand and stronger export demand in other industrial countries leads to the rapid improvement in the U.S. current account deficit.

11. The initial response of both the exchange rate and the current account is very similar to the previous scenario. The immediate shift in investor sentiment and the relative decline in returns in the United States generate a sharper depreciation of the exchange rate than contained in the base case and the current account recovers much more quickly. However, unlike the previous scenario, the current account adjustment comes more through a decline of import demand in the United States than through an increase in demand from the rest of the world. In the United States, both households and firms respond to both the sharp increase in consumption and investment prices arising from the depreciation and to substantially lower expectations about future growth and wealth. Relative to the base-case scenario, the weaker U.S. currency stimulates exports which contribute to the faster current account recovery.

12. The sharper appreciations of the currencies of the other industrial countries reduce inflationary pressures allowing monetary policy to be more supportive of domestic demand and real activity increases. However, the net impact on world growth is negative as the sharply slower growth in the United States adversely affects GDP growth in developing countries, which more than offset the mild acceleration in growth coming from other industrial countries.

13. A final scenario considers the effect of an adverse fiscal shock that is related to the funding problems of Social Security and Medicare (Figure 3). These programs are well known to be running large actuarial deficits, which will eventually require cuts in benefits or increases in taxes. The base case implicitly assumed that the government puts in place reforms to these systems that addresses their large unfunded liability and allows taxes net of transfers to remain constant. In this alternative scenario, however, it is assumed that these reforms are delayed, requiring an increase in labor income taxes in the future. In particular, it is assumed that in the sixth year of the simulations, households suddenly recognize that labor income taxes will need to be higher over a lengthy interval in the future (starting in the fifteenth year and lasting for 30 years).

14. Once households recognize the implications for future taxes, their saving rate increases sharply, consumption declines relative to the base case, and real activity initially declines. The weakening of consumption demand leads to an easing in monetary policy and a sharper depreciation in the exchange rate. The lower exchange rate increases export demand and weaker domestic demand suppresses imports and the current account deficit shifts to a surplus after eight years. For the remaining industrial countries, the sharper appreciation of exchange rates allows for short-term interest rates below those in the base case. The acceleration in domestic demand resulting from the easing in monetary policy more than offsets the decline in net exports and real activity increases.

A modified Mark IIIB version of MULTIMOD is used, in which the uncovered interest parity condition that determines exchange rate behavior is amended so that agents5089/expectations of the one-period-ahead exchange rate is modeled as a weighted combination of the previous period5089/s exchange rate (weight of 0.45) and the model-consistent one-period-ahead exchange rate (weight of 0.55). Further, an additional term is added to the parity condition to capture some of the impact of changes in the marginal product of capital. For a detailed presentation of the structure of MULTIMOD Mark III see Laxton and others (1998).

The recent performance of the U.S. economy is almost certainly the result of a far more complex set of factors than those considered here. Even if relative productivity growth and the risk premium have played an important part, there are undoubtedly many other factors that have contributed and these simulations should be evaluated in this light.

Other MULTIMOD simulations of current account adjustment are discussed in Arora, Dunaway, and Faruqee (2001); and IMF (2001).

Increase in U.S. Productivity and Reduction in Risk premium 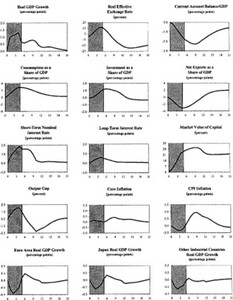 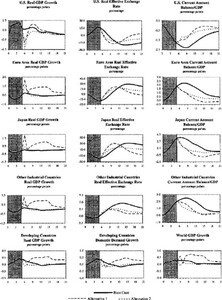 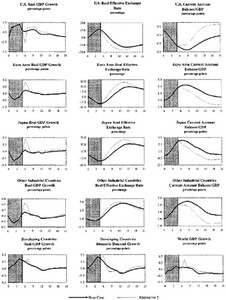