A series of adverse supply and demand shocks have brought the euro area’s three-year expansion to a virtual standstill. Buoyant labor markets, which have been the hallmark of the recovery since 1997, have succumbed only gradually to the slowing of output growth. The slowdown has been pervasive throughout the area, albeit unevenly and with different cyclical implications. Recent travails notwithstanding, the second half of the 1990s saw a significant improvement in the macroeconomic performance of the euro area.

A series of adverse supply and demand shocks have brought the euro area’s three-year expansion to a virtual standstill. Buoyant labor markets, which have been the hallmark of the recovery since 1997, have succumbed only gradually to the slowing of output growth. The slowdown has been pervasive throughout the area, albeit unevenly and with different cyclical implications. Recent travails notwithstanding, the second half of the 1990s saw a significant improvement in the macroeconomic performance of the euro area.

1. This supplement reports on information on economic and financial developments in the euro area that has become available since the issuance of the staff report on the area’s monetary and exchange policies (SM/01/289) to the Executive Board. In particular, the supplement addresses the implications for prospects and policies of these developments and the events of September 11. The new information does not alter the broad thrust of the staff appraisal.

2. Recent data on the pace of real economic activity, which mostly reflect developments prior to the events of September 11, suggest that growth in the third and fourth quarters of 2001 is likely to be more sluggish than projected in the staff report:

4. In concert with the U.S. Federal Reserve and other central banks, the ECB cut its refinancing rate by SO basis points on September 17 (Figure 1). The ECB also acted to support the normal functioning of financial markets by providing extra-liquidity to the euro money market and meeting urgent U.S. dollar liquidity needs of European banks by conducting foreign exchange swaps. In commenting on the decision to cut policy rates, the ECB’s Governing Council noted that the terrorist events “… have increased uncertainty about the U.S. and the world economy” and are “likely to weigh on confidence in the euro area and on the short-term outlook for economic growth.” Against this background, the ECB’s second-pillar assessment of inflation dynamics suggests that slower growth is likely to further reduce inflationary risks in the euro area. As regards the first-pillar assessment, growth in M3 has been trending upward sharply in recent months (from 5.2 percent in May to 6.7 percent in August) and remains significantly above the ECB’s reference value of 4.5 percent. However, the ECB has noted that recent M3 growth figures in excess of its reference value need to be interpreted with considerable caution in view of continued measurement problems and possibly significant portfolio shifts linked to a relatively flat yield curve and increased uncertainty in equity markets.

5. Financial market developments in the euro area since September 11 have largely mirrored developments in the United States (Figure 1). Euro-area equities—already in a headlong retreat over the summer-plummeted in tandem with U.S. markets (by 10-15 percent). However, more recently, equity markets have staged a strong recovery, regaining the ground lost in the aftermath of September 11, but market uncertainty—as measured by implied stock market volatility—remains high. In government bond markets, long-term yields eased somewhat after September 11, but yield curve slopes have steepened more recently in response to cuts in short-term policy rates. Spreads of euro-area corporate bonds over government bond yields for some sectors including the high-tech sector have increased significantly as markets re-priced risk in an environment of heightened uncertainty. The euro had gradually strengthened against the U.S. dollar in the month prior to the terrorist attacks, a trend matched by evidence from “risk reversal quotes” based on option markets that pointed to an increased probability for a large euro appreciation. Following September 11, the euro first appreciated somewhat further but has since stabilized at about U.S. dollar 0.90 per euro.

6. On balance, new information on slower-than-projected real activity and the likely effects of the events of September 11 both point toward diminished near-term growth prospects for the euro area. The downward revisions due to indications of slower than-projected growth before the September 11 events mainly impact on the third and fourth quarters of the current year. While these revisions have a small effect on annual GDP growth in 2001, the carryover effect alone is estimated to reduce annual growth in 2002 by ¼ percentage points. In the staff’s preliminary revision to its growth projections, the rebound is now projected to reach above potential rates only in the second half of 2002 (as opposed to the first half of 2002 in the staff report) as both domestic and external demand are sapped by the economic fallout from the September 11 events. The assessment of these adverse spillovers via confidence, trade, and financial linkage effects is subject to substantial margins of uncertainty as regards both timing and strength.1 The mainsprings of the rebound remain otherwise as before, namely a pickup in real personal income against the background of good fundamentals and an improved external environment. At the same time, risks to the area’s medium-term price stability are receding both on the external side and on the domestic side, as the likelihood for continued wage moderation in 2002 and beyond has increased.

7. More specifically, in the context of the ongoing staff revisions to the economic outlook, and based on the preliminary assumptions,2 area-wide real GDP is now expected to grow by 1.7 percent in 2001 and by 1.6 percent in 2002, compared to 1.8 percent and 2.2 percent, respectively, in SM/01/289 (Table 1).3 These revisions for the euro area reflect both a top-down and a bottom-up (country-by-country) approach and are broadly in line with the most recent (post-September 11) Consensus Forecasts. Reflecting the lower growth prospects, the area’s output gap is now projected to widen to about 2 percent in 2002 (compared to an output gap of 1¼ percent in SM/01/289), while the unemployment rate is projected to rise to 8.6 percent (compared to 8.4 percent previously). Headline CPI inflation is projected to ease in response to lower oil prices and slower growth to 1.5 percent in 2002 (compared with 1.7 percent in SM/01/289).

8. Although significant, the revisions to growth are not such as to warrant a different assessment of fiscal requirements in 2002. In all countries, including those that have not yet achieved positions close to balance or in surplus, automatic stabilizers should operate freely on the revenue side, while public spending should stick broadly to original plans consistent with the medium-term orientation of the SGP. In light of the projected rebound by mid-2002, discretionary countercyclical action in the upcoming 2002 budgets would not seem to be appropriate, except in countries that already enjoy strong underlying fiscal positions. Fiscal developments for the area as a whole are expected to remain broadly in line with these requirements. The area’s overall fiscal deficit in 2002 is projected to reach 1.4 percent of GDP in 2002 (compared to 1 percent of GDP in SM/01/289), but this reflects the operation of automatic fiscal stabilizers (Table 2). In cyclically-adjusted terms, the area’s revised deficits edge down from 0.8 percent of GDP in 2001 to 0.6 percent in 2002, i.e. are broadly neutral but with a slightly contractionary cast. Country developments differ, however. Despite its weak growth performance, Germany is on present plans projected to adopt a contractionary stance, in line with its Stability Program consolidation targets, while in France the draft budget and other measures being considered imply some discretionary easing. Italy’s overall fiscal stance (excluding real estate asset sales) is projected to be broadly neutral. Nevertheless, Italy’s nominal primary spending growth in 2002 is estimated to exceed by a significant margin the previous projection in the staff report and staff’s estimate of primary spending growth in the Stability Program.4 The smaller countries, some of which have the scope for discretionary action, are expected to take a neutral to cautious stance.

9. The area’s broadly neutral overall fiscal stance provides a supportive backdrop for assessing monetary requirements. With the 50 basis point interest rate cut of September 17, the ECB properly accelerated (under exceptional circumstances) interest rate changes that had been in the offing and expected by markets before the events of September 11. Markets are currently pricing in interest rate reductions of a similar magnitude over the next three quarters, reflecting inter alia the weakened growth outlook, and the staff’s revised projections embed these market expectations. The revised projections point to headline inflation decelerating further (to 1 ½ percent) and hence to continuing scope for monetary easing. This scope would widen if the euro were to appreciate. The main uncertainty in the inflation outlook is still wage behavior, which so far has remained benign.

Staff work based on the IMF’s econometric model of the world economy (MULTIMOD) suggests that “spillover coefficients” (defined as the percentage point reduction in euro-area growth given a 1 percentage point reduction in U.S. growth) can range from 0.1 to 0.7 depending on the nature of the shock and the transmission channels (see Chapter III of IMF Country Report No. 01/149 for the United States).

Key assumptions underlying these revised projections include: (i) a downward revision in near-term GDP growth prospects for the United States relative to the published WEO; (ii) a new baseline for oil prices (US$21 per barrel in 2002, or US$3.5 less than in the published WEO); (iii) a new baseline path for nominal short-term interest rates (based on revised market expectations); and (iv) a constant real exchange rate consistent with an underlying nominal U.S. dollar/euro rate of 0.91 during 2002.

Weighted averages of data for individual euro-area countries valued at purchasing power parities (PPP). Using Eurostat aggregation weights, which are based on 1995 ECU conversion rates, growth rates would be slightly lower (by about 0.1 percentage points).

Recent fiscal developments in Germany, France, and Italy are discussed in more detail in separate updates of the Article IV staff reports for these countries. 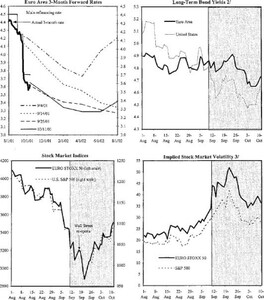 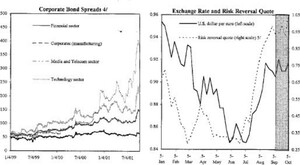