VII. Returns to Human Capital and Investment in New Technology1

1. The sharp acceleration in output and labor-productivity growth in the latter half of the 1990s has been attributed to a surge in technological innovations and the adoption of new technologies across the economy. The fact that the U.S. economy has been a leading innovator and has adopted many of the technological changes that took place more rapidly than other major industrial countries has been credited in part to the high degree of flexibility in U.S. product and labor markets. The flexibility in the U.S. labor market, in particular, has been singled out as a potentially important factor since it has allowed firms to more easily reorganize work processes to take full advantage of the productivity-enhancing features of the new technologies.

2. However, there is another avenue through which labor market flexibility has contributed to the strong U.S. productivity performance. This flexibility has allowed a substantial differential between the wages of skilled and nonskilled workers (referred to here as the wage premium) to develop. With the change in technology having a significant skill bias, the demand for skilled workers has increased, bidding up the wage premium, and in turn, the amount of skilled workers has increased and further stimulated investment in new technologies. The link between the wage premium, the acquisition of skills (investment in human capital), and investment in equipment and software embodying new technologies (physical capital) can be illustrated in a simple theoretical model of an economy. Allowing explicitly in the model for the existence of skill-biased technology change and for a positive feedback loop between investment in human capital and productivity growth the model can be used to illustrate the negative effects of policies that serve to limit the wage premium (and returns to human capital) and how these effects may be partially offset by measures to subsidize education

3. In the 1990s, the United States experienced a substantial increase in the wage premium and rising employment of skilled workers in both absolute and relative terms. The increase in the wage premium was reflected in a significant widening in the income distribution (pre-tax basis) in the United States. Other major industrial countries (with the exception of the United Kingdom) did not experience similar widening in their income distributions, suggesting that these countries did not see a substantial increase in their wage premia and in human capital investment, contributing to the slower pace of adoption of new technologies in most of these countries. The more limited differentiation in wages in these countries is related to economic policies and/or institutional arrangements affecting labor market behavior; such practices to some extent may reflect social choices and cultural differences.

5. The model also can illustrate the impact of policies or institutional arrangements (such as centralized “cooperative” wage bargaining) that serve to limit the differential in wages across groups of worker with different skill levels. For example, the skill premium can be reduced by the introduction of an income tax (especially one with very progressive marginal rates). Such a policy would basically be equivalent to a negative shock to the relative productivity of skilled versus unskilled workers. It would reduce incentives to acquire education by lowering the after-tax/transfer wage premium. Income disparity between skilled and unskilled labor would be reduced, but at the cost of lower economic output growth.

6. The effect of policies or institutional arrangements that effectively cap the wage premium can be offset to some extent by subsidies that reduce the cost of education. Such subsidies would encourage skill acquisition; however, this would be accomplished in a less efficient manner than if there were sufficient flexibility in the wage premium. While education costs are an important element in determining investment in human capital, they tend to be small in relation to the opportunity cost of foregone wages during the period during which skills are acquired. Nevertheless, some subsidization of education costs is a key feature of the education system in all countries in recognition of the potentially great social benefit from skills acquisition.

B. Experience in the United States

7. In the last 60 years, the wage premium in the United States between college-educated (used here as a proxy for “skilled” workers) and high-school graduates (an “unskilled” proxy) has shifted dramatically. In the 1940s, the premium fell significantly, before recovering in the 1950s and 1960s. The premium narrowed again in the 1970s, but it subsequently has risen sharply, increasing to an unprecedented level in the late 1990s (Figure 1). For heads of households, the premium has doubled in the last two decades, while for the work force as a whole it has increased by more than 50 percent (Figure 2). At the same time, the supply of skilled workers has increased both absolutely and in relation to unskilled workers (Figure 3). This joint increase in the skill premium and the relative supply of skilled workers can be traced back to the very strong relative demand for skilled workers during the 1990s.4

8. This rise in the skill premium has coincided with a rapid acceleration in technological progress. Expenditures on new information technology equipment and software in the United States have increased sharply during the period (Figure 4). In turn, the increases in investment in new technologies, in employment of skilled workers, and in the wage premium have been accompanied by sustained rapid growth in the United States and strong labor productivity growth (Figure 5).

9. Data on information technology investment during the 1990s show that, as a share of GDP, such investment rose sharply in the 1990s in the United States, the United Kingdom, and Canada, while it remained broadly unchanged in France and Germany (Figure 6). The United States also led all of the major industrial countries in spending on research and development (Figure 7). Machin and Van Reenen (1998) demonstrate that skill-biased technological change and research and development intensity were associated with increased demand for skilled labor. They find that these factors are especially important in explaining the significant increases in the demand for skilled labor during the 1990s in the United States and the United Kingdom 5

11. Education subsidies can have an important effect on net returns to skill acquisition. Data on total government spending for higher education shows that all of the major countries spend broadly comparable amounts, with the exception of Canada which spends significantly more than the others (Figure 9). Thus, although Canada has not experienced a comparable widening of income distribution as the United States, its higher level of education spending may explain in part its more favorable performance in skill acquisition and adoption of new technologies in relation to most of the other major countries.

The model follows the basic framework of Blankenau (1999) and extends it using the approach developed by Galor and Moav (2000) to capture the positive link between investment in human capital and investment in new technologies. The model is described in a forthcoming IMF working paper by Kaufman, Luzio, and Dunaway.

Acemoglu (1998) characterizes this positive feedback loop as the result of a high proportion of skilled workers inducing a large demand for skill-biased technologies, which in turn encourages faster upgrading of the productivity of skilled workers.

See, for example, Autor, Katz, and Krueger (1998) and Katz (1999). These studies conclude that the prime cause of the rise in the skill premium was a shift in the skill structure of labor demand brought about by skill-biased technological changes.

Prasad (2001) also finds evidence of increased relative demand for skilled workers in the United Kingdom during the 1990s. 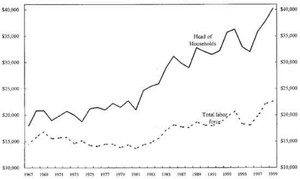 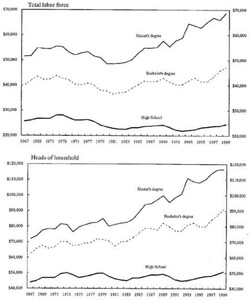 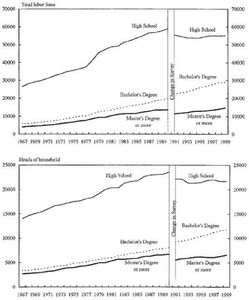 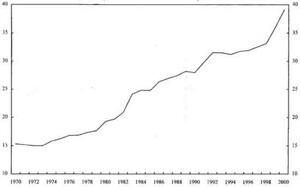 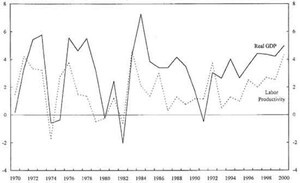 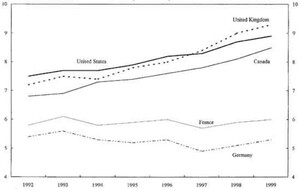 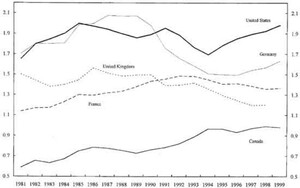 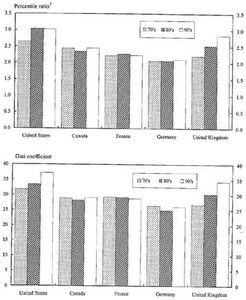 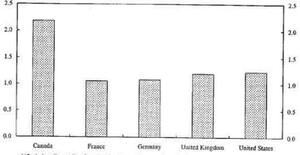 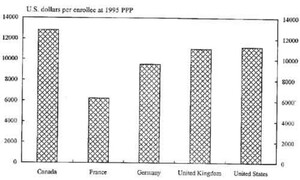